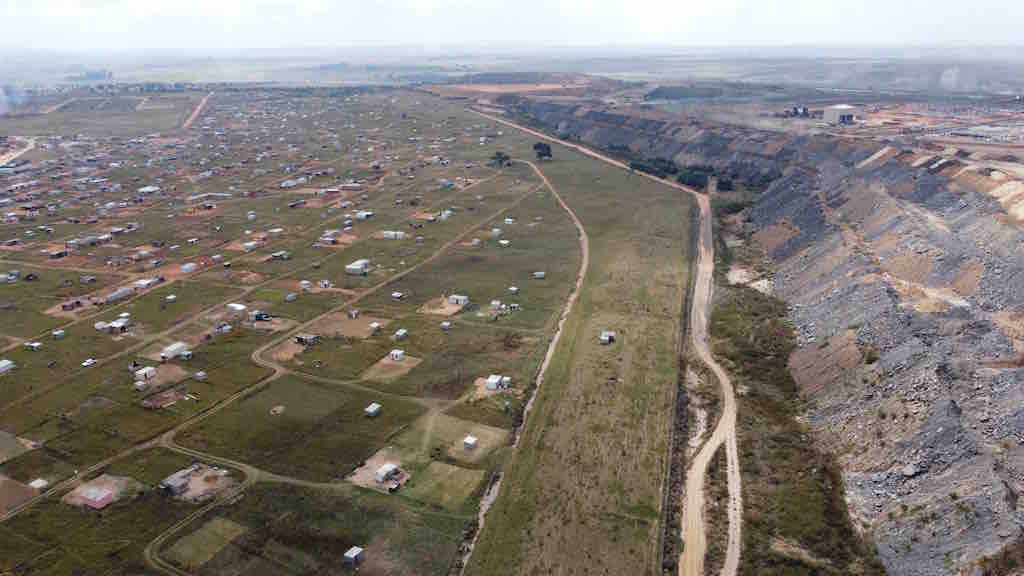 An ambitious new government strategy to deal with abandoned mines is welcome but needs more teeth, say those in the know. Andiswa Matikinca reports

The draft national strategy aims to manage the closure of mines to mitigate negative impacts on neighbouring mines, communities and the environment. Photo © Daylin Paul/Life After Coal

It has been almost six years since #MineAlert reported that it will cost R30-billion or more to clean up and rehabilitate the thousands of abandoned mines scattered around South Africa. In a series of data-driven investigations, starting with No (dis)closure on mining’s mess, #MineAlert highlighted the legacy impacts on the environment and the health of poor communities living along the mining belt.

In May 2021 the government published a new national mine closure strategy to deal with the problem. Still in draft form, the key focus areas include environmental rehabilitation, planning for “a diverse post-mining economy”, closure planning throughout the lifecycle of a mine and a regional approach to mine closures.

The draft strategy aims to manage the sustainable closure of mines regionally to mitigate negative impacts on mines neighbouring and connected to those due for closure as the closure of one mine has an impact on those that are still operating. The strategy also aims to mitigate environmental impacts such as the contamination of water sources, air pollution, radioactivity from uniferous waste and land degradation.

The implementation of these key aims focuses on planning for the economic succession of mine operations and developing a diverse economy from the mine and surrounding environment after the life of a mine has been reached. The strategy highlights food and non-food agricultural projects as one of the possible post-mining economic activities.

Mining companies and the government will have to work together in assessing the full social and environmental impacts of any proposed new mining project and drafting sustainable closure plans for the proposed mine. A peer review process throughout the life of the mine will go hand in hand with the monitoring and evaluation process, according to the draft document.

Professor Michael Solomon, one of the independent advisors to the Department of Mineral Resources and Energy during the drafting of the strategy and a professor at the University of Cape Town’s Department of Chemical Engineering, said this strategy is community focused and aims to provide an economic succession to mining as well as succession plans where mining should be seen as a catalyst of primary economies.

According to Solomon, the economic beneficiation of mines can also happen through “extending the economic footprint of a mine while it is still in production, by creating parallel economies on and around mining sites that are not necessarily tied into the mine’s economic value chain but can enhance the economic value of the infrastructure.

“This is to make sure there is an alternative economy that is not tied to the mine that will provide for post-mining development in the communities,” he said. 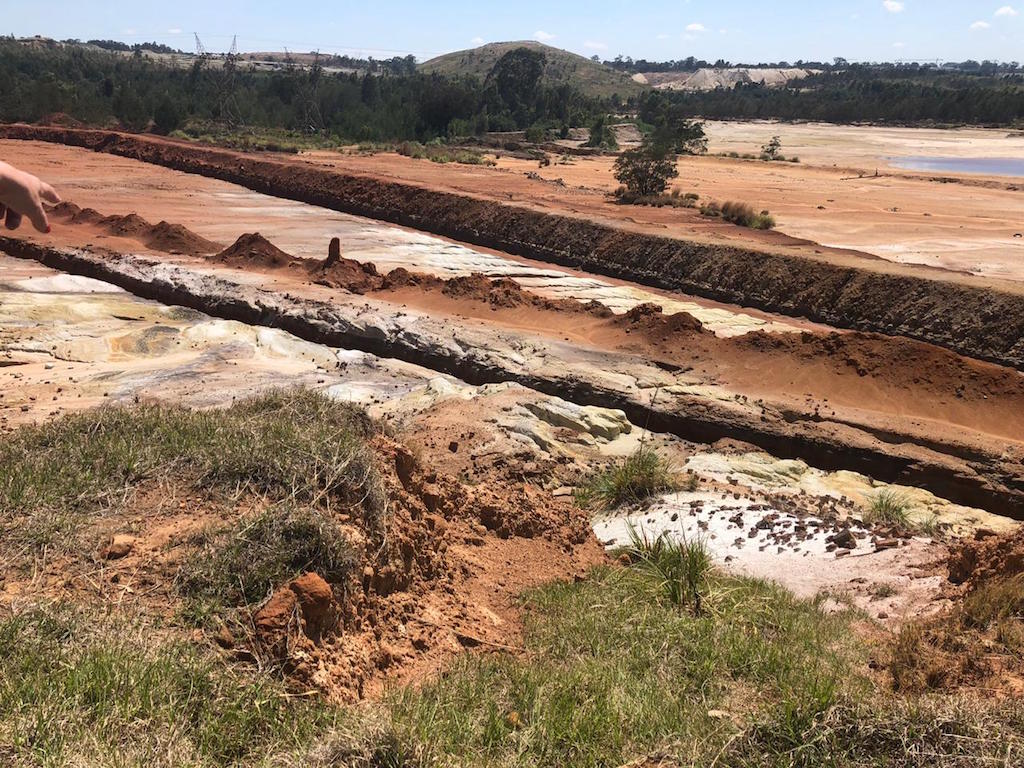 Acid mine water enters the Wonderfonteinspruit through unlined and unreclaimed pollution control dams on Mintails property. A Parliamentary investigation found a R460-million shortfall in the money needed for full cleanup. Photo supplied by FSE

Mariette Liefferink, chief executive of the Federation for a Sustainable Environment (FSE), an NGO that has been dealing with the legacy of abandoned mines for years, said there was an urgent need for this new strategy. It was originally developed by the Council of Geoscience as a regional mine closure strategy for the Witwatersrand goldfields in 2008, she said.

In their official comments submitted to the department, the FSE welcomed the draft strategy but Liefferink said before it can be turned into policy it needs to have more teeth. “We would like to see punitive and administrative measures taken against operators, managers and directors of companies if they are non-compliant with the policy that will flow from this strategy,” she said.

The strategy should have been finalised and published sooner to avoid certain undesirable consequences, especially in the declining gold mining sector where the closure of gold mines is imminent.

“It [the lack of a proper strategy] has incentivised certain mining companies instead of following a structured closure process. They simply liquidated and no one could be held responsible for the environmental and ecological damage,” she said.

In an 18-month data-driven investigation on mine closures across South Africa, #MineAlert revealed in 2016 that very few companies apply to close large-scale mines legally, and that the money set aside for environmental rehabilitation is usually minimal. A real-life case study of the undesirable consequences of unclear laws pertaining to mine closures was the R460-million mess left behind by gold mining company Mintails, which was granted provisional liquidation in August 2018.

According to Liefferink, nothing has changed on the ground with Mintails despite a parliamentary probe seeking clarity on who would foot the bill for the clean-up costs. (See Parliament probes Mintails toxic legacy.) The FSE is currently preparing an expert report on the current risks to the communities and the environment as a result of the abandoned Mintails operations, she said. 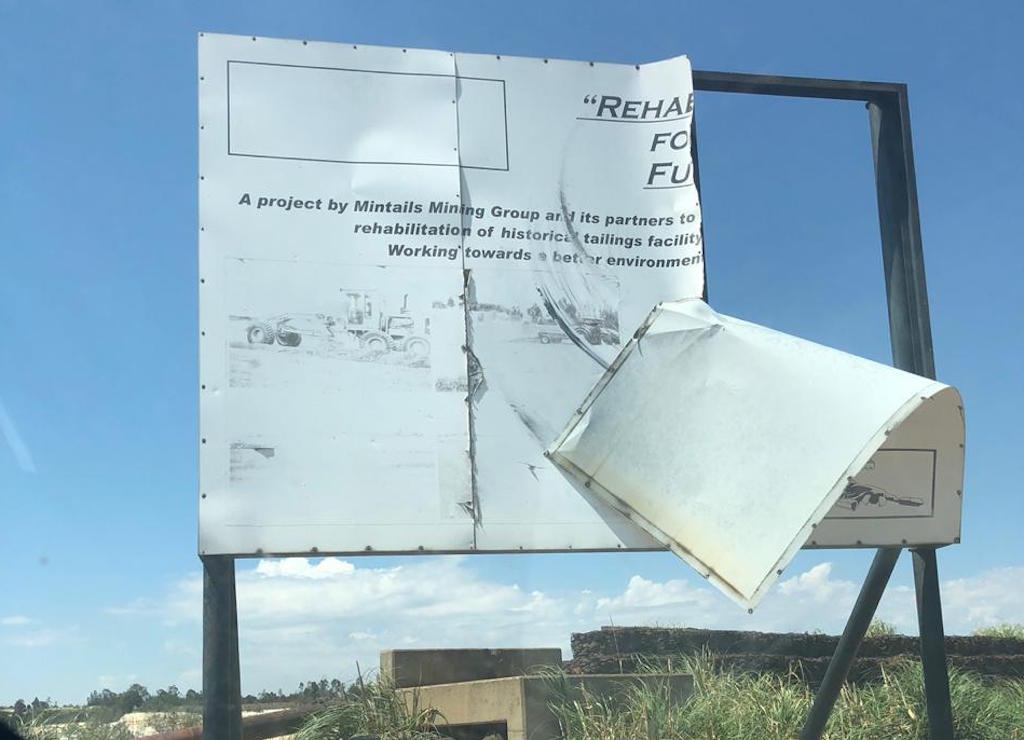 ‘Rehabilitating for the future’: A shredded sign outside one of Mintails’s operations proclaiming its intention to rehabilitate the gold mine in November 2018. Photo supplied by FSE

The proposed government strategy has many linkages with existing legislation that deals with mine closures, such as section 43 of the Mineral and Petroleum Resources Development Act as well as the Financial Provisioning Regulations for the rehabilitation and remediation of environmental damage caused by reconnaissance, prospecting, exploration, mining or production operations, which were published in 2019 and are still in draft format.

Environmental laws require that mining companies include studies that show the projected environmental damage ahead of their proposed mining activities and what the costs of rehabilitation will be in their Environmental Management Plans (EMPs) when applying for a mining right or permit. The companies also have to set aside funds to cover these costs.

The Department of Environment’s Financial Provisioning Regulations regulate how holders and applicants of mining rights and permits should provide funds for the rehabilitation of environmental damage caused by mining activities following the closure of a mine. The financial provisions as well other aspects related to mine closures previously fell under the Mineral and Petroleum Resources Development Act but now fall under the National Environmental Management Act.

Responding to questions about what is holding back progressive action when it comes to mine closures, Professor Tracy-Lynn Field, who holds the Claude Leon Foundation chair in earth justice and stewardship at the University of the Witwatersrand, said there is a lack of leadership to coordinate integrated and regional mine closure strategies.

“The Mineral and Petroleum Resources Development Act already allows for this, but to date we have lacked state leadership to take it forward,” she said. “As a result we have a fragmented and piecemeal approach which also applies to the funding of closure and the socio-economic planning for mine closure.” 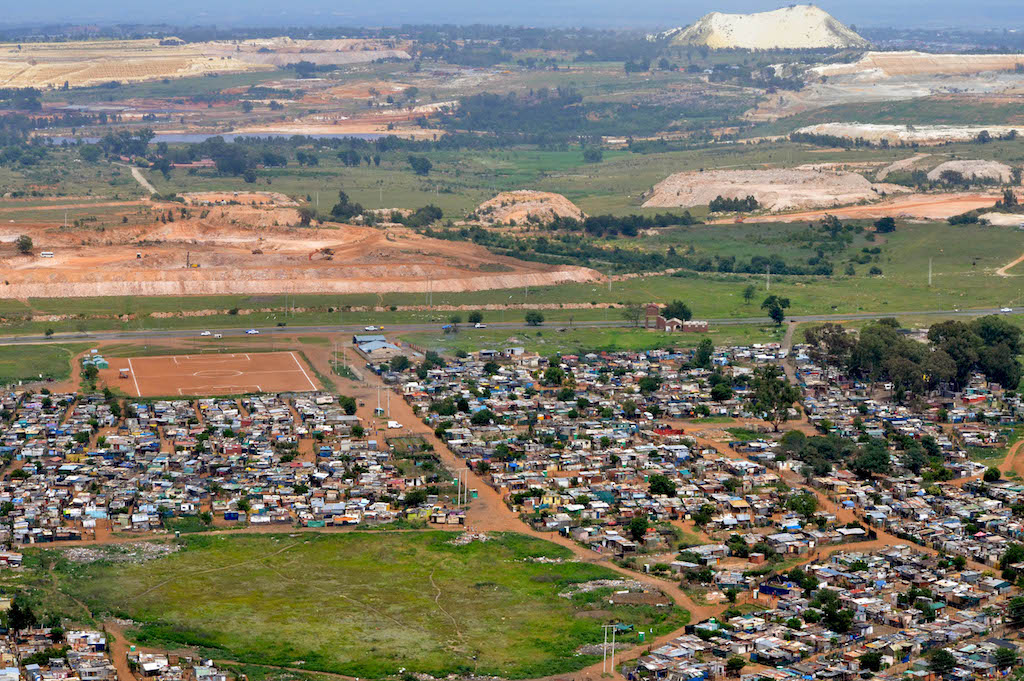 The legacy of unrehabilitated gold mines in the Krugersdorp area – water and air pollution affecting informal settlements in close proximity to the abandoned mines and remaining operations. Photo © Mark Olalde/Aerial photography made possible by The Bateleurs

The challenges with current mine closure processes, as reported by #MineAlert in the past, include the fact that only small amounts of the financial provisions are held in cash and are not enough to cover the full extent of the rehabilitation costs; delays in the issuing of closure certificates to mining companies; the abuse of temporary closure or care and maintenance laws to avoid expensive closure programmes; and mines being passed down to smaller companies that can only afford to mine the remaining minerals and are unable to cover the historical damage left by their predecessors. These mines are then abandoned, opening up opportunities for illegal mining to take place and leaving health and safety threats to communities.

“Neither the law, nor the accounting standards governing company disclosures, ensure the necessary transparency and accountability about financial provision for environmental rehabilitation. It is therefore impossible for shareholders or taxpayers to hold companies or regulators to account,” stated the Centre for Environmental Rights (CER) and Intellidex in a 2018 report, Full Disclosure: The truth about mining rehabilitation in South Africa.

Field said state failure to implement laws that require long-term mine closure planning and finalise amendments to the financial provisioning regulations “leaves companies in a prevailing atmosphere of uncertainty.

“There is a failure to arrest the ‘chain’ of buck-passing for closure liabilities that proceeds through legal means such as major asset sales, business rescue and company winding-up. There is also a lack of any legal mechanism to allow for partial closure, as is recognised elsewhere in the world.”

Field said instead of only focusing on punitive and administrative measures, the DMRE should be examining creative incentive schemes that will allow mining companies to transition or to facilitate the transition to other economic activities in mined areas.

The strategy document will inform and provide guidelines for a policy on mine closures. Solomon said there will likely be a two-stage process of looking at the comments and feedback on the draft strategy, followed by a second round of more focused consultations.

“From this there will be a more focused round of consultation with the relevant stakeholders and once that draft has been signed off by the minister it will go into a policy document and be gazetted,” he said.

Find the draft National Mine Closure Strategy here, and the FSE comments here

This article by #MineAlert manager Andiswa Matikinca was produced with support from Oxpeckers Investigative Environmental Journalism and Code for Africa’s WanaData project.