No (dis)closure on mining’s mess 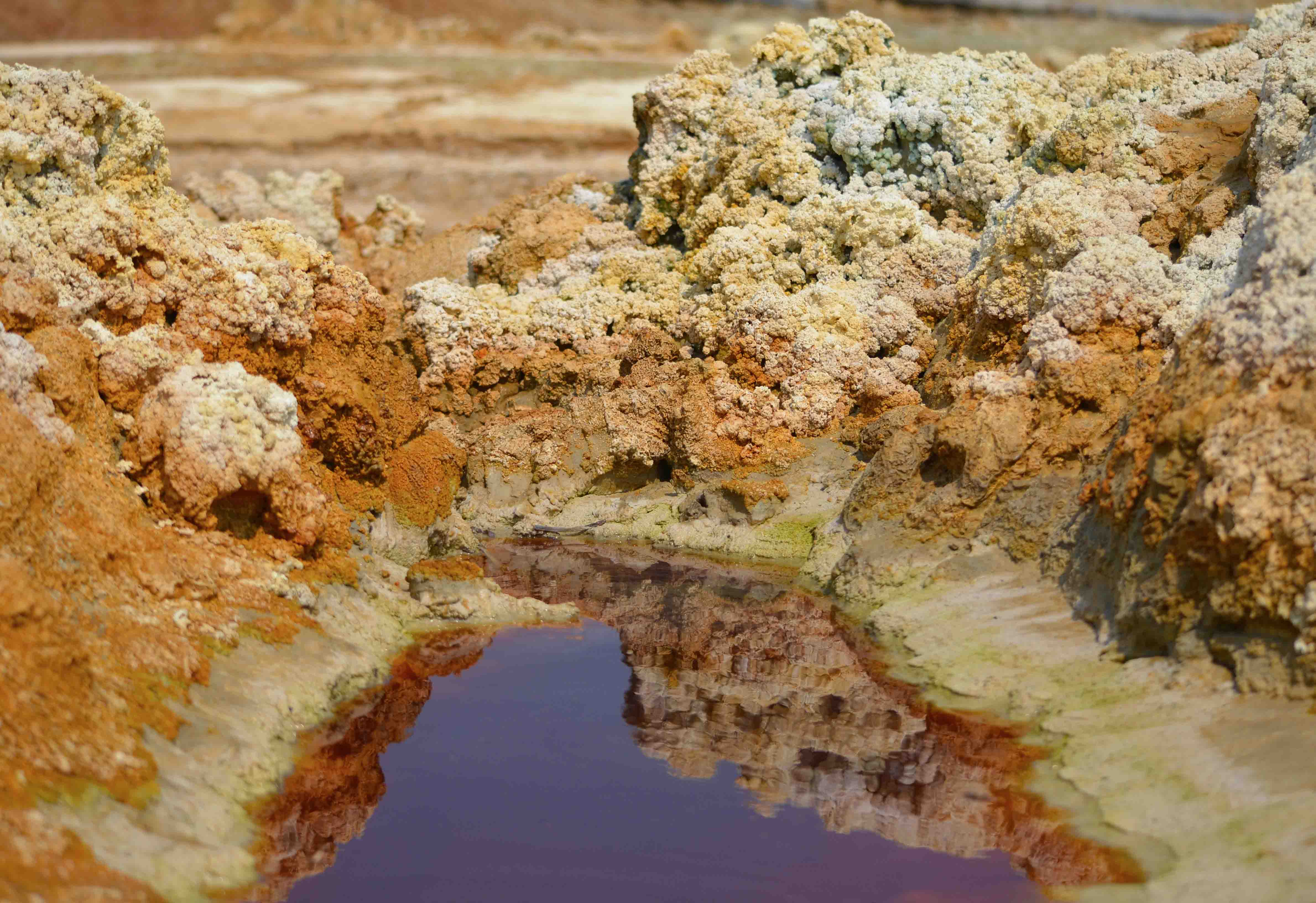 14 Oct No (dis)closure on mining’s mess

It could take R30-billion or more to clean up the thousands of abandoned mines scattered around South Africa. Who’s going to do it? And what are the implications for active and new mines? Mark Olalde investigates 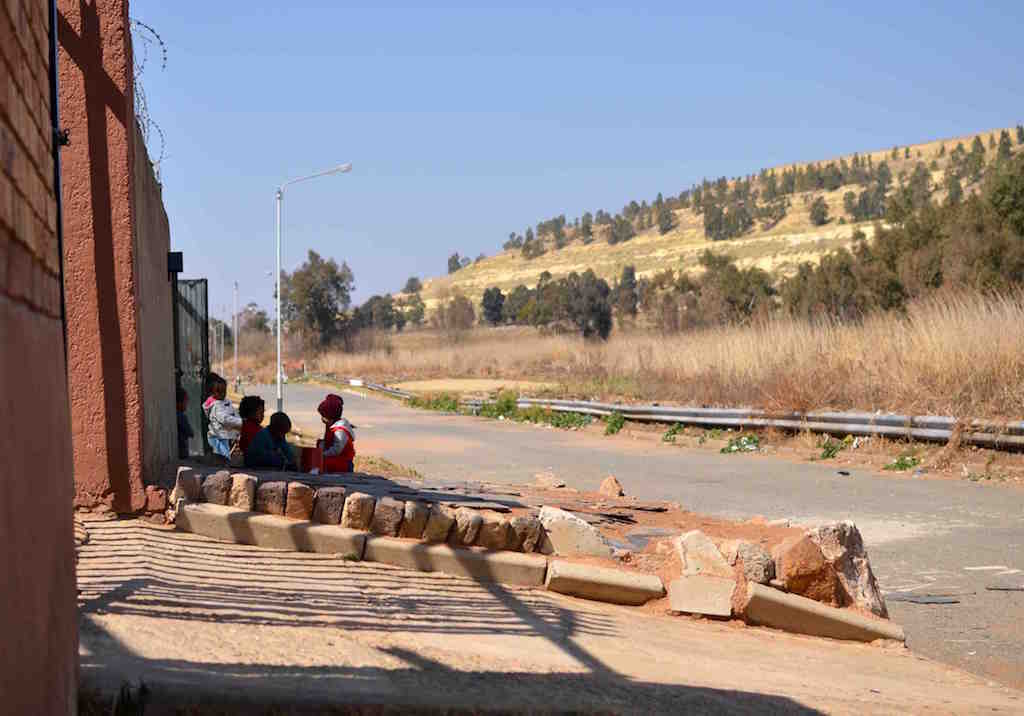 A tailings pile containing waste from gold mines looms behind children playing on Sand Street in Riverlea. When the wind blows in specific directions, uranium-laden dust blankets this street and others like it in Diepkloof, Soweto. Photo: Mark Olalde

On the border of Johannesburg and Soweto, the Riverlea community nestles among tailings piles to both the north and the south. Unlined and unfenced streams run along the piles of mine waste, the liquid cocktail dyed fluorescent blue or reddish-brown from the heavy metals and chemicals leaching off the dumps. During the windy season, dust from the dumps pelts residents.

Up the road, zama zamas (informal miners) work in an abandoned mine and process the gold by mixing and burning it with mercury. Much of life here is dictated by these old mines.

Regulatory failure around mine closures has scarred South Africa with thousands of abandoned mines and waste sites. Without proper closure, the gold mining industry in particular has left legacy impacts on the environment and affected the health of poor communities along the mining belt.

Patricia Plaatjies is a 62-year-old pensioner living across the street from the dumps near Riverlea. Since 2009 she has survived on an oxygen machine, spending 16 hours a day tethered to it in her living room.

“If I was younger I would have relocated from here, but look at my age. Where am I going to go?” Plaatjies said. “I’ve known this place all my life. It’s my home.”

At least 1,6-million people live in informal settlements around Johannesburg, many of them on or near mine waste sites, according to a 2011 study titled “Ecologies of Gold” in Places journal.

However, due to a lack of epidemiological studies on the impacts of living in proximity to this waste, litigation and other measures against offending companies are limited.

“A lot of the mining houses have been getting away with murdering this country,” said André Swart, dean of the University of Johannesburg’s faculty of health sciences. 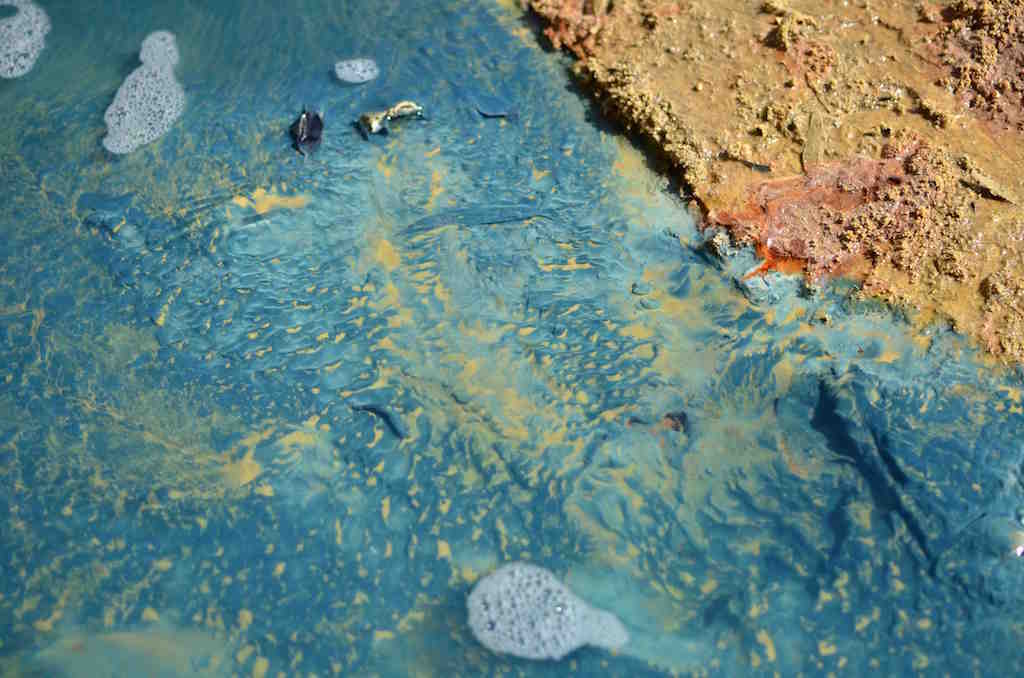 Water coloured a fluorescent blue leaches out of a tailings pile near Soweto. More than 270 such piles dot the landscape around Johannesburg, most of them unlined. Photo: Mark Olalde

During 129 years of gold mining in the Witwatersrand Basin, the industry dumped six billion tonnes of mine waste, and more than 270 tailings piles remain. Most are unlined and many were purposefully positioned on top of sinkholes and aquifers to dry them out more quickly.

“There’s a significant amount of leaching of heavy metals into the waters, and if people use these water sources, it will cause significant impacts to their health,” Swart said.

About 52 kilotonnes of gold were mined throughout the history of the Witwatersrand Basin, leaving an estimated 430 kilotonnes of low-grade uranium in the basin’s mine residue – equal to the weight of 2,365 Boeing 747 jetliners.

In the basin, tenfold more uranium occurs naturally than gold, and much of the West Rand and Far West Rand have uranium concentrations between 15 and 130 times the average in the earth’s crust.

“We put up residences, townships, developments quite close to these areas because it’s usually the cheapest piece of land we can find, and that just exposes the vulnerable to higher levels of pollution,” Swart said.

That means the production of one standard gold bar in 2013 unearthed nearly seven million kilograms of waste, equivalent in weight to the Springboks’ entire starting lineup 4,450 times over.

According to the 2012 Gauteng Mine Residue Areas Strategy, produced by the Gauteng Department of Agriculture and Rural Development, 374 “mine residue areas” – often toxic and radioactive land – exist over 321 square kilometres of Gauteng, the size of about 46,000 football pitches.

Because the area includes 94 gold mines and 60 re-mining operations, the report estimated that only 8% of the land could be cheaply rehabilitated.

“Collectively the dust problem poses a significant health risk and reduces the quality of life for a large number of citizens. Furthermore, this undermines the credibility of the mining industry as a responsible corporate citizen,” the report found. 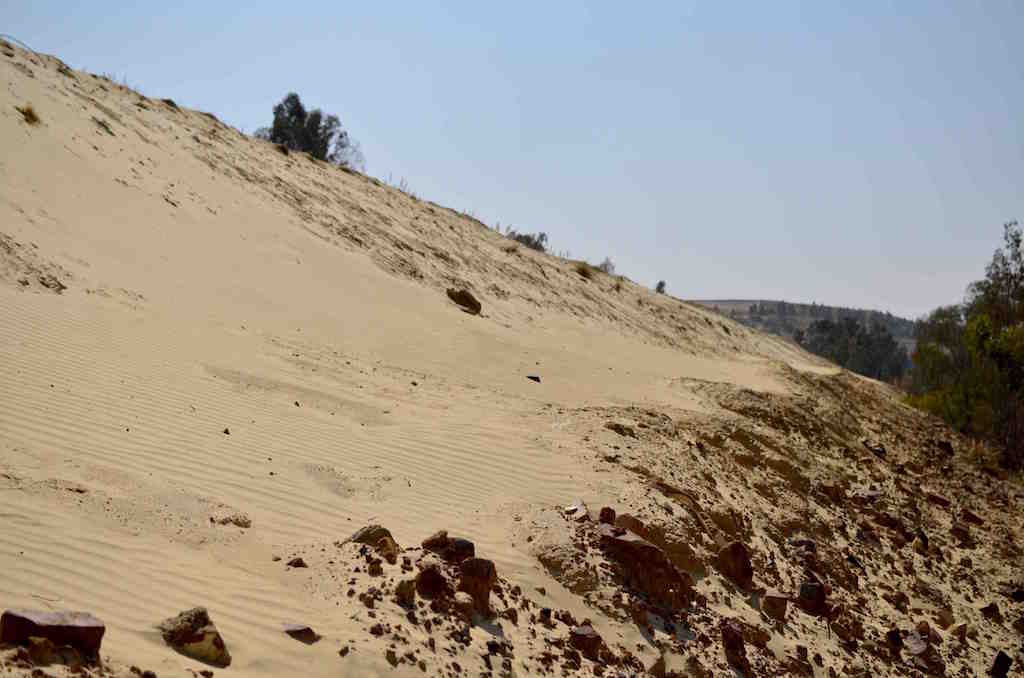 Sandy mine waste atop a tailings pile near Soweto contains uranium and other metals. In 2013 Chamber of Mines members produced about 562,000 times as much mine waste as gold. Photo: Mark Olalde

The government holds a list of 6,000 officially derelict and ownerless mines around the country, a list it is currently unwilling to make public.

It could take R30-billion or more to remediate these derelict and ownerless mines, according to a report published in May by the Gauteng City-Region Observatory, a think-tank partnering the University of Johannesburg, the University of the Witwatersrand and the Gauteng provincial government.

Ayanda Shezi, spokesperson for the Department of Mineral Resources, said rehabilitation of derelict and ownerless mines is administered by the Council for Geoscience and Mintek.

“On average, 40 sites have been rehabilitated per annum over a period of six years. The target has been raised to 50 sites per annum since 2014/15,” she said.

Seven Promotion of Access to Information requests were submitted by Oxpeckers to the mining department regarding mine closure trust funds, financial provisions, mine sales and closure certificates. After the allotted 30 days, the department indicated that two of the seven requests had been accepted but no documents have been provided yet.

“People are reaping the rewards [of mining] but have very little accountability,” said Louis Snyman, an attorney at the Centre for Applied Legal Studies at the University of the Witwatersrand. 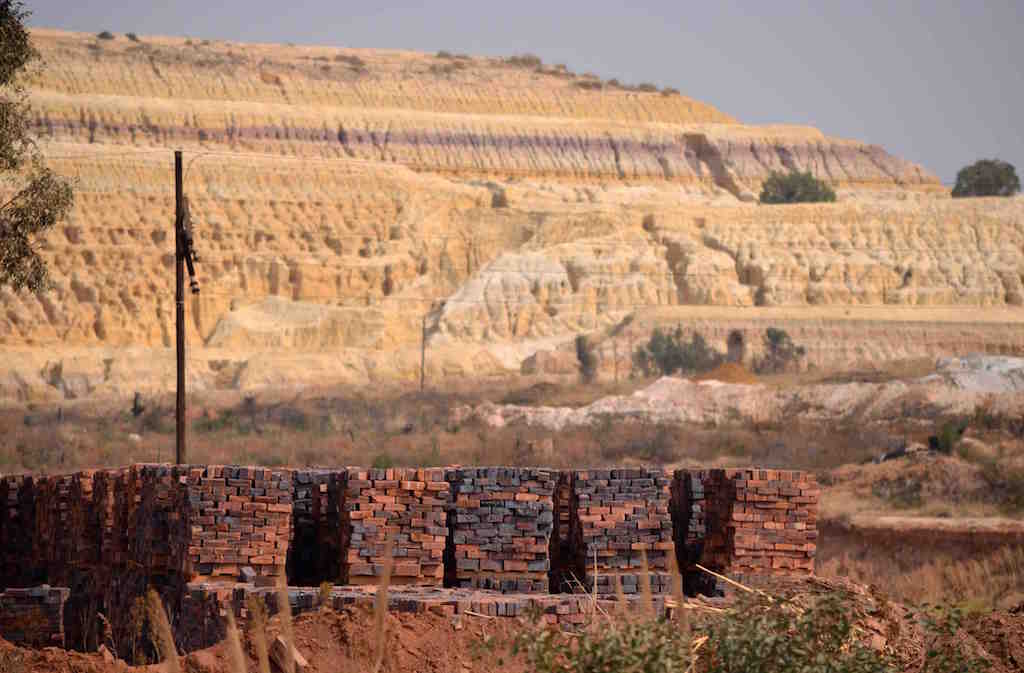 Bricks produced partially from mine waste reclaimed from tailings piles await shipment. Many of these bricks have historically been used in the construction of buildings in Johannesburg’s central business district. Photo: Mark Olalde

A lack of transparency also pervades the closing of currently operational mines.

All active mines are required by law to hold money in a mine closure trust fund or other financial provisions ring-fenced specifically for environmental rehabilitation. However, this money is often woefully inadequate to clean up a mine, and is sometimes not used at all.

Proper mine closure faces an additional challenge from the process of selling off mines to junior mining houses – often called “scavenger companies” – that can afford to mine the remaining low grade ore but almost never have enough funds for remediation. Mines are passed down the chain until they are finally abandoned and worked only by zama zamas.

“We have reasonable access to funds to put towards these projects, but the guy down the road might not have that. And there’s not a superfund of some sort,” Ellis said. “There is a requirement to be funded for mining liabilities, but we’ve seen where that’s gotten us. It’s not working.”

According to Shezi, trust funds and other financial provisions held across the country for mine closures total R45-billion. She did not respond to questions about how the money was being spent.

The department’s guidelines instructing companies on how to calculate trust funds have not been updated since 2005, not even to account for a decade of inflation.

When mines finally are abandoned, the department has the legal power to open and use the trust funds and financial provisions, but it is often wary to do so because it also takes on the mine’s liability.

Changes in legislation currently being implemented transfer regulatory power on closure from the Department of Mineral Resources (DMR) to the Department of Environmental Affairs, although enforcement will remain with the DMR.

The environment department declined to respond to questions on these changes. However, on October 14, the department announced in a media statement that proposed amendments to several pieces of legislation, including the National Environmental Management Act, would strengthen rules on financial provisioning for mine closures, the issuing of licences and government enforcement powers.

“There are very clear guidelines for mines’ closure and rehabilitation and management of these, but unfortunately they are not enforced. Just implementing and enforcing the relevant legislation will make a significant difference,” Swart said.

Falling gold prices over the past five years have been a mixed bag for the environment as expansion dropped off while companies abandoned a number of mines. Experts predict rapid movement when commodity prices bounce back, and coal, not gold, will be the target.

“There’s going to be a huge influx of new mining rights applications that will be granted,” Snyman said. “Northern Limpopo is one of the areas that has been identified as a mineral-rich area.

“Limpopo is also one of the poorest provinces in South Africa and has one of the highest rates of corruption in the country. It’s a perfect storm.” – oxpeckers.org