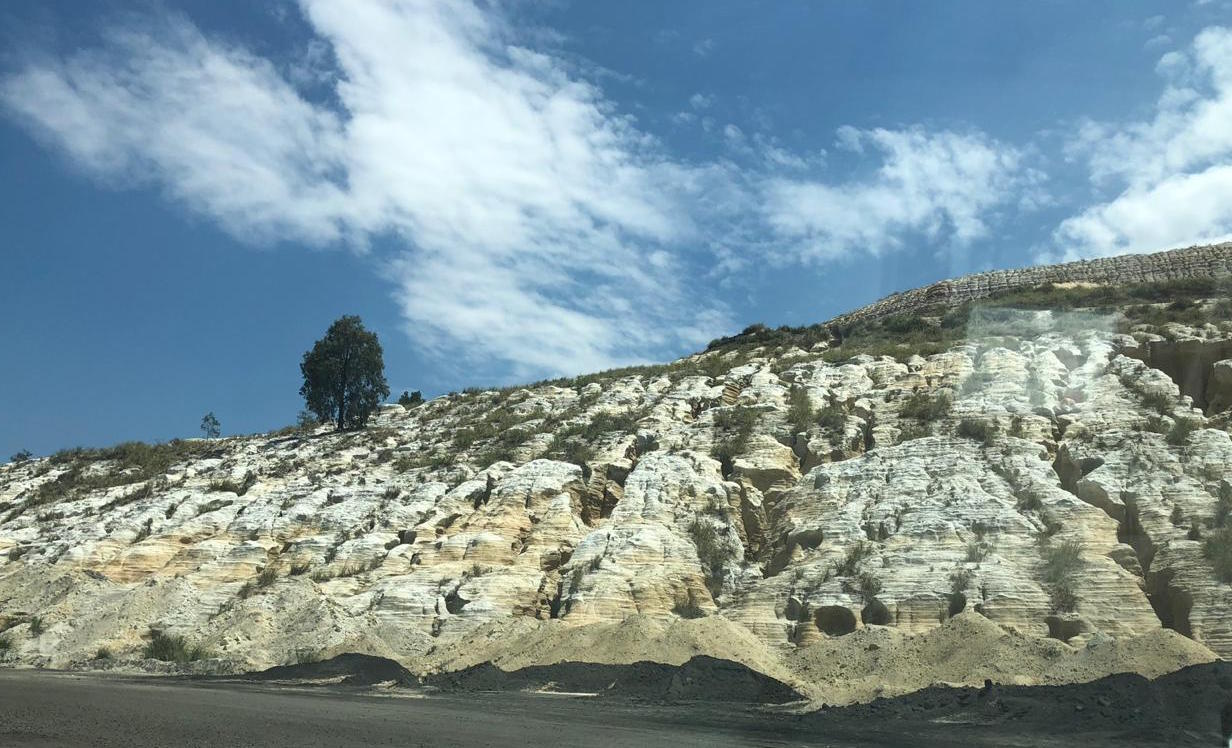 Executives at Mintails and DRDGOLD scramble to avoid liability and the possibility of criminal charges for R460-million environmental mess on the West Rand. Mark Olalde investigates. Additional reporting by Andiswa Matikinca

Directors of the Australian-owned Mintails face possible criminal charges after a parliamentary investigation found Mintails SA (Pty) Ltd is R460-million short on the money it owes to clean up the environment at its mining operations near Krugersdorp.

Sparked by an Oxpeckers investigation into Mintails’s failing 1,715ha gold mine, Parliament’s Portfolio Committee on Mineral Resources launched its own inquiry, uncovering a slew of illegal activities and lax oversight by the company and the Department of Mineral Resources (DMR).

Mintails failed to submit audited financial statements for the past five years, mined outside its permits and ignored commitments made in its social and labour plan. The company was not issued licences for its mining rights, although the DMR knew this and allowed mining to continue for six years, the documents show.

After the company entered liquidation in August, about 750 full-time or contract employees are out of work, while 90% of the funds expected to be recovered by the liquidation process will likely end up with an investor in London, according to letters from the business rescue practitioner to the DMR contained in court documents.

Responsible parties are doing what they can to deflect blame, but directors of Mintails now face the possibility of criminal charges as other mining companies turn on them.

“The [Portfolio Committee on Mineral Resources] is often confronted by instances of the devastation caused by careless mining where the DMR says it is a state liability because no one can be found to take responsibility,” the committee said in a report released on November 22. 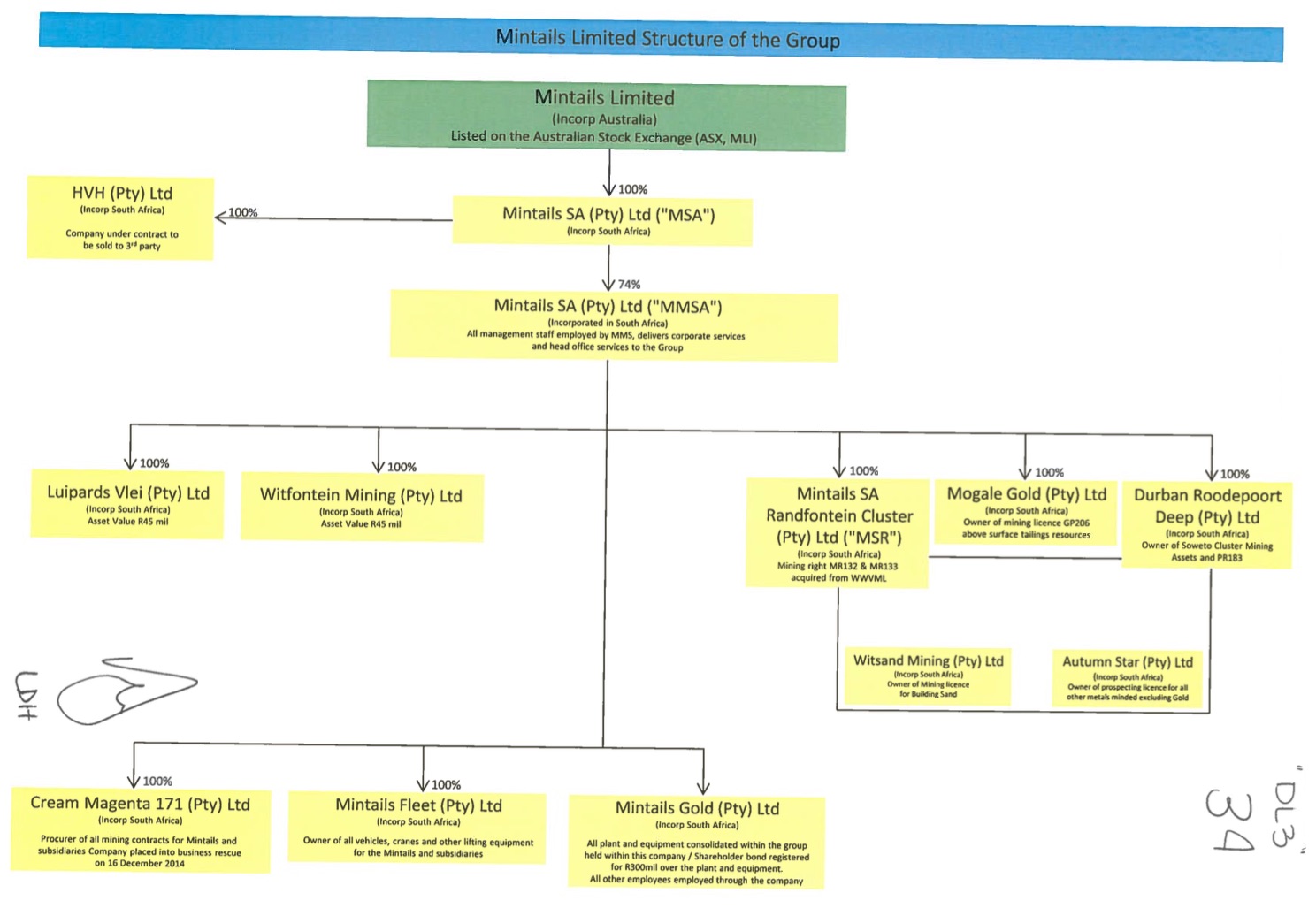 Profiting in the face of disaster

Mining companies often slip into business rescue and liquidation to avoid liability and to wall off environmental rehabilitation and workers from accessing profits.

Mintails’s executives and investors appear to have set themselves up to recover much of these assets while shrugging off responsibility.

Court records from the liquidation proceedings revealed letters from the business rescue practitioner, Dave Lake, and his attorneys sent to the DMR that admitted a single international majority shareholder is the only secured creditor.

This shareholder, Paige Limited, is an investment vehicle run by the wealthy Harbour family. The London-based Gideon Harbour is one of Mintails’s remaining directors, and his family will receive an estimated 90% of the funds expected from liquidation. Harbour did not respond to several requests for comment.

Workers and the environment are unlikely to see a cent, according to Lake.

The court documents show that Mintails South Africa and its subsidiaries, including Mintails Gold and Mintails Randfontein, are insolvent. Mintails Gold only had R819.43 in its accounts at the end of July. In addition to the cleanup costs, the company owed creditors more than R710-million.

Oxpeckers has reported for several years that, while an estimated R60-billion is held in financial assurances around the country, South Africa’s mine cleanup system is woefully underfunded and that the DMR has badly mismanaged the closure process, allowing companies to abandon numerous mines.

The Portfolio Committee on Mineral Resources confirmed these findings: “It is clear that some mining companies are still operating without adequate financial provision for repairing damage caused to the environment by mining activities, if they suddenly close.”

Hendrik Schmidt, a Democratic Alliance member of the committee, told Oxpeckers he plans to raise the issue of Mintails again next year, but he is worried the upcoming elections in 2019 could complicate parliamentary follow-up.

The committee’s report found the DMR “failed” to manage mine cleanup and that current legislation has “not proven effective in avoiding this situation where the state and the taxpayer still ends up paying for the environmental harm caused by mining”.

In a statement, a DMR spokesperson said the department was working closely with environmental NGOs to address the portfolio committee’s findings. 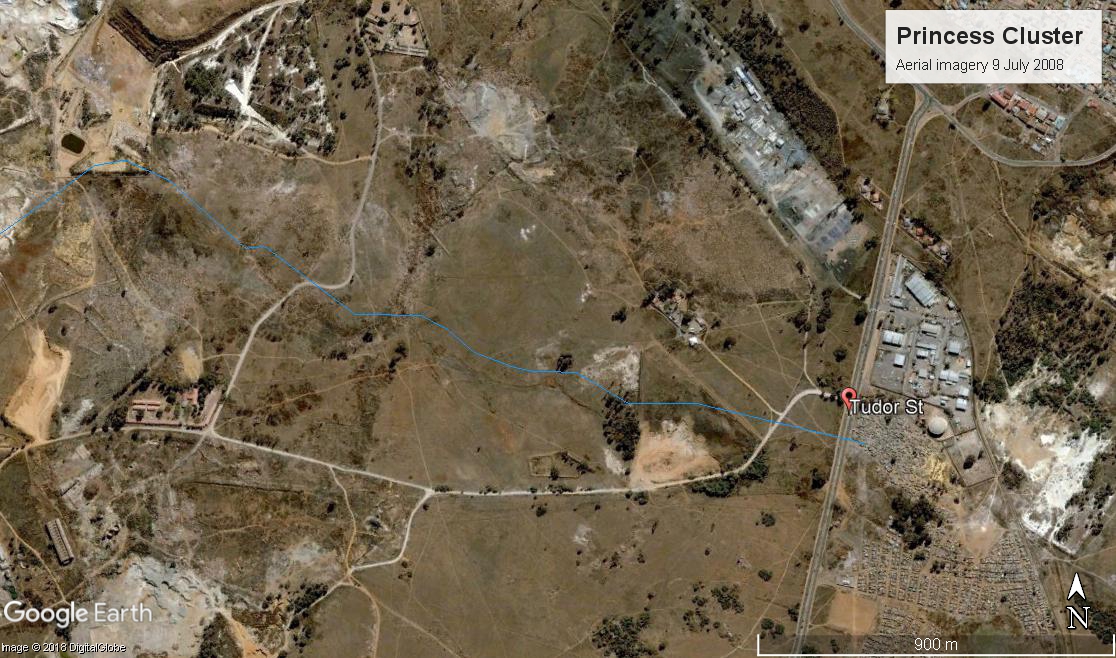 Mine creep: Satellite imagery shows how the Mintails mining operations advanced on Tudor Street settlements from July 2008 (above) to June 2018 (below) 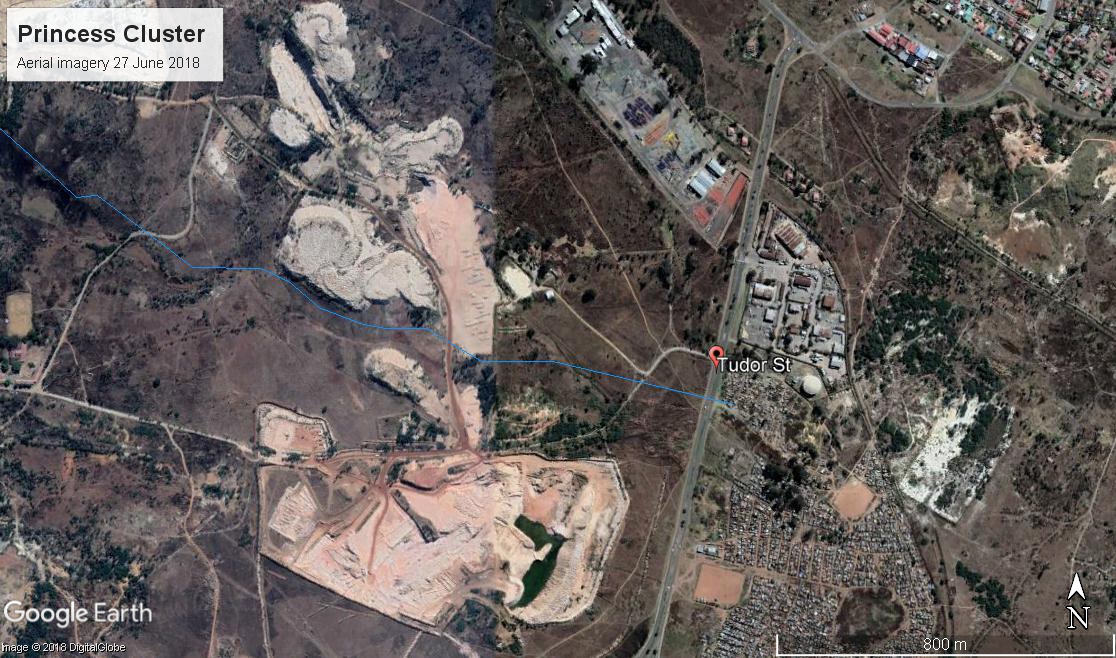 The report cited concern that Mintails’s West Rand operations will become the next Blyvooruitzicht Gold Mine or Aurora mine, two other major disasters in Gauteng born from the industry’s propensity for abandoning unprofitable operations.

DRDGOLD Limited, which sold part of the Krugersdorp mining concession to Mintails, is also one of the companies responsible for Blyvooruitzicht, having walked away from its operation there when a sale fell through.

One of the permits mined by Mintails is held by West Wits Mining Limited after a transfer was withdrawn due to a lack of BEE partnership, and it is unclear which company is liable. In an email to Oxpeckers, DRDGOLD CEO Niël Pretorius distanced the company from responsibility, though he sits on West Wits’ board of directors and DRDGOLD is the largest shareholder.

“We don’t believe either DRDGOLD or its personnel are liable for the malfeasance of Mintails and its directors,” Pretorius said.

“We have already found a lot of what may amount to evidence and, even though it is early days, I believe we may be able to make out a case that would see erstwhile directors being held accountable for the disgraceful mess they have left out on the West Rand,” O’Sullivan said by email, adding his group might pursue criminal charges.

The DMR is also targeting Mintails’s leadership. “A process has been initiated to hold them liable,” a department spokesperson said.

In addition, West Wits chairman Michael Quinert said his company should not be held liable and is considering legal action against Mintails executives. He said he had only recently learned that the sale to Mintails fell through.

“We are also considering instituting proceedings against individuals, including Gideon Harbour, arising out of their conduct in causing these unfunded environmental liabilities,” Quinert wrote in an email. “Our objective is to vigorously pursue Mintails and those concerned with managing and owning its business to ensure they are held to account.”

Johan Moolman is a director of Mintails and was chief executive until June. He refused to comment on the record and made vague threats of litigation. Additional Mintails’s representatives could not be reached for comment.

“We are hopeful that, as our investigations unfold, the persons concerned will realise the folly of their ways and take steps to fix things up, before it is too late,” O’Sullivan said. 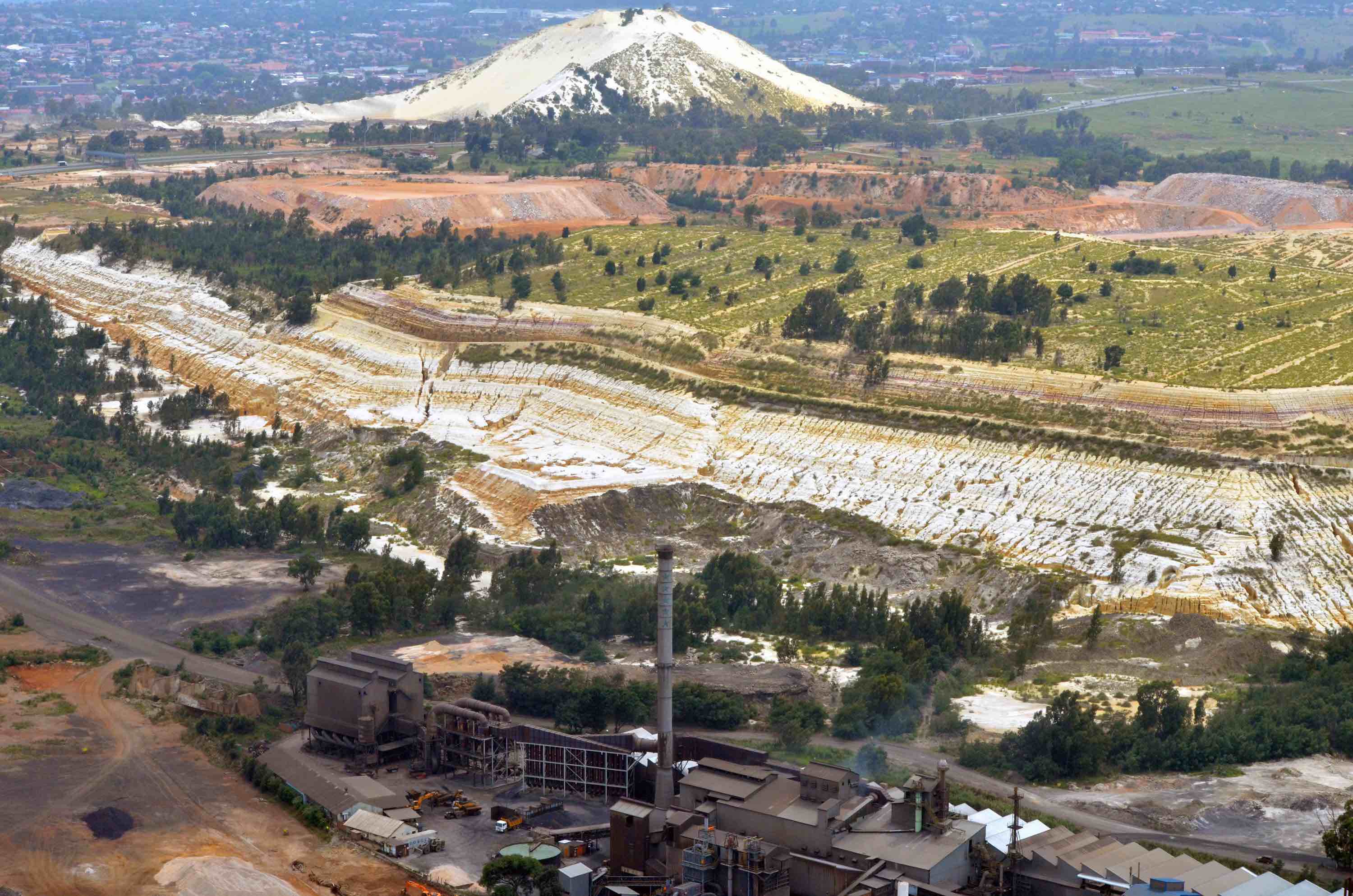 Environmental disaster: A smelter and the adjacent Mintails’s gold mine waste piles spew pollution and dust over the West Rand. Photo: Mark Olalde

While revenue is exported from the country, thousands in the nearby communities suffer from the unmitigated environmental and economic disaster.

The portfolio committee found that the three mining rights operated by Mintails would cost more than R485-million to clean up. There exists only about R25-million in financial provisions for that purpose, and the keys to the trust fund reside with DRDGOLD, not Mintails.

DRDGOLD’s Pretorius told Oxpeckers he is willing to spend the money on reclamation when the DMR asks, but the department said it is waiting until the liquidation process is complete.

In 2014, the DMR directed Mintails, which owns about 100-million tonnes of mine waste around Krugersdorp, to increase financial provisions to match the environmental liability. Moolman then brought in consultants to find lower liability numbers, which the DMR rejected. Mintails did not top up the funds.

In the ensuing years, Mintails contravened numerous aspects of its permits and relevant legislation. It entered business rescue in October 2015 and went to the DMR around May 2018 with a plan to save the company.

However, company directors were unable and unwilling to front the reclamation costs. As a result, the minerals minister declined the proposal and, in June, demanded that Moolman, the business rescue practitioner and Harbour remedy the situation.

With much of Mintails’s business gone after the DMR also stopped it from processing material brought in from other mining companies, the majority shareholders instructed the business rescue practitioner to file for liquidation. 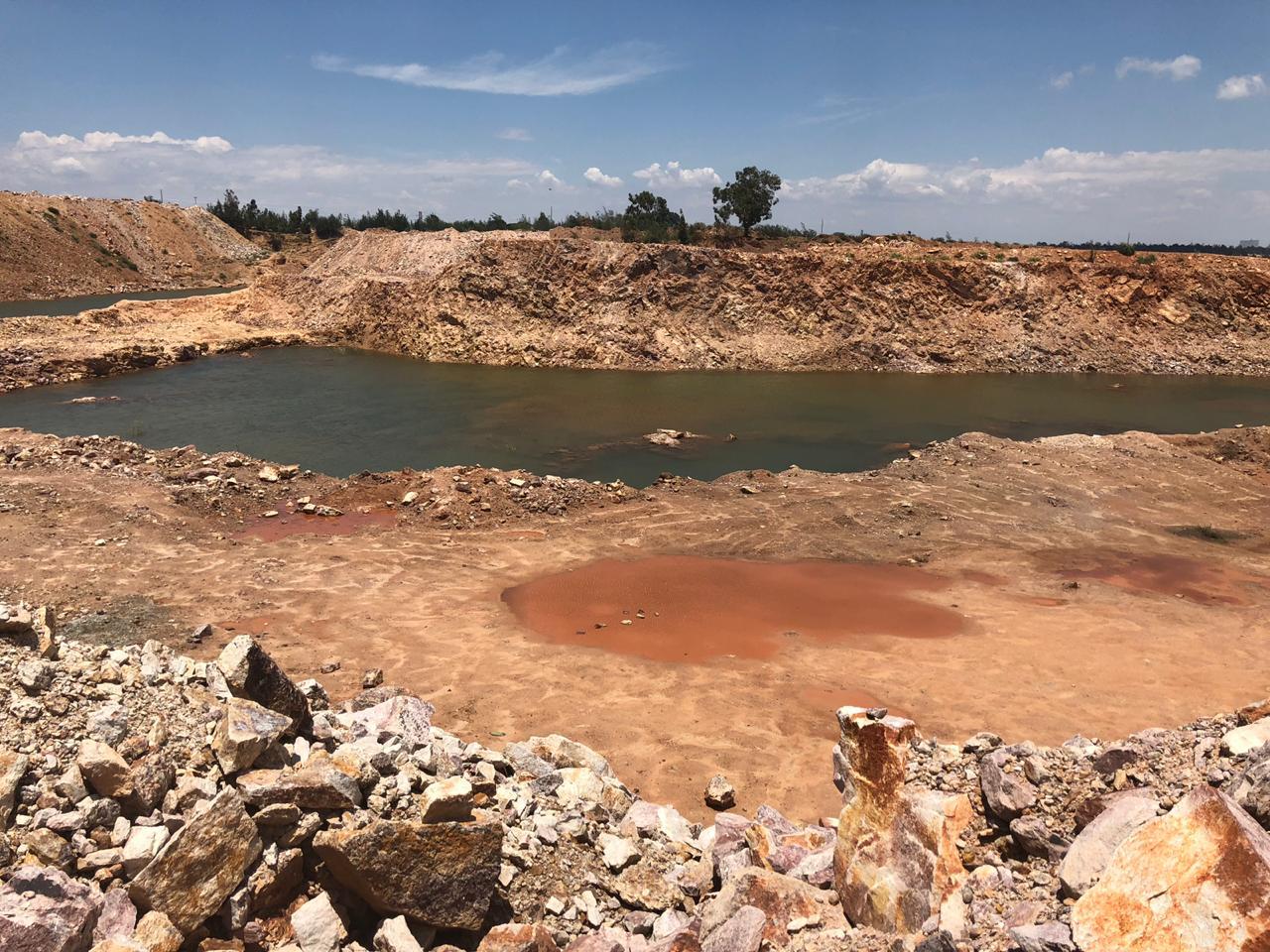 Death trap: According to Parliament’s investigation into Mintails’s liquidation, pupils have drowned and criminals have disposed of corpses in these unrehabilitated pits. Photo courtesy Mariette Liefferink/FSE

A number of site visits by Oxpeckers uncovered a crack in a pollution control dam that seeped toxic water into the Wonderfonteinspruit, unreclaimed waste piles and a number of spillages from pipes carrying acid water.

Federation for a Sustainable Environment (FSE) chief executive Mariette Liefferink, who toured Mintails’s operations with police in late November, said they discovered 14km of pipes that transported slurry had been stolen from the property, further worsening pollution.

The portfolio committee’s report also found that blasting at Mintails’s operations had previously cracked nearby homes, that there is increased illegal mining activity and that pupils had drowned in the open mine workings. Liefferink said zama zama activity in the nearby Tudor Shaft informal settlement is taking place within a metre of some dwellings.

In its statement, the DMR called the situation “unfortunate” but said it could not do anything to aid the roughly 750 affected workers directly because the liquidation “is not within the department’s jurisdiction”.

Selwyn Trakman from Highveld Trust & Management CC, the lead liquidator, declined to comment on a strategy for protecting the environment and workers while dissolving Mintails.

The FSE, represented by attorney Lucien Limacher of the Legal Resources Centre, has kept watch on the liquidation and has sent offers to assist that have been ignored by the liquidators.

“We are hoping that environmental justice occurs,” Limacher said.

• Read the original #MineAlert exposé on the Mintails collapse here, and on Business Live here

• #MineAlert helps you to track and share mining licences, and to explore mining threats to water resources