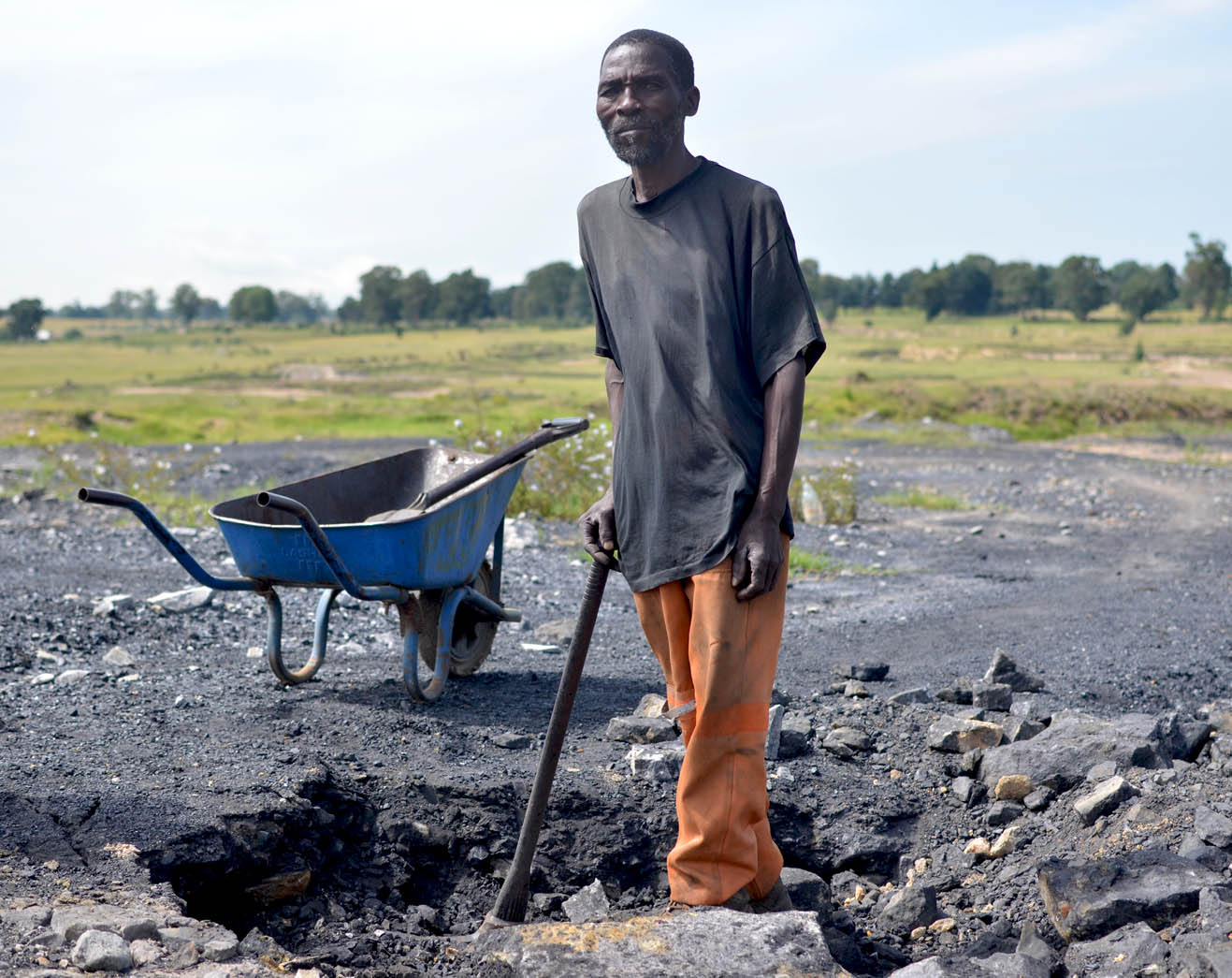 Posted on 7 Apr, 2017 by Oxpeckers Reporters

Oxpeckers publishes never-before-seen data exposing the lack of mine closures, despite R45-billion being held in financial provisions for rehabilitation in 2015. Investigation by Mark Olalde 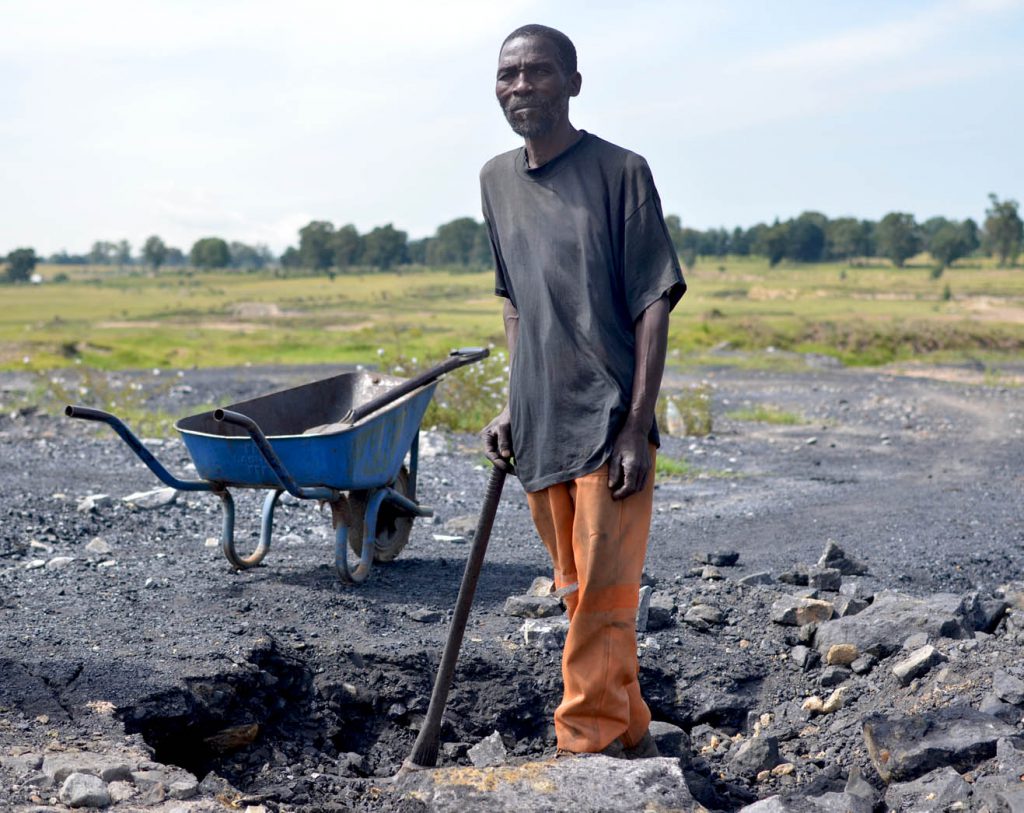 An artisanal miner digs coal at an abandoned mine in the Wesselton township in Ermelo, Mpumalanga. The mine’s complete lack of rehabilitation led to a booming illegal mining scene, which has resulted in numerous deaths. Photos: Mark Olalde

A 19-month data investigation of mine closures indicates that since at least 2011 no large coal mines operating in South Africa have been granted closure.

This means the mines have not been rehabilitated and are simply abandoned, leaving a legacy of local and global pollution.

The country’s operating and abandoned coal mines release greenhouse gases with a global warming effect equivalent to up to 4.3-million tonnes of carbon dioxide a year, estimates mining consulting firm Latona Consulting. That roughly equates to consuming 10-million barrels of oil and could be significantly decreased with proper mine rehabilitation, including backfilling pits, sealing shafts and replanting flora.

“The Department of Mineral Resources has been totally incapable of closing individual mines,” said David Hallowes, a coal researcher at the non-profit organisation groundWork. “A lot of this land is high productive agricultural land, and it’s ruined. End of story.”

Never-before-seen data released by the Department of Mineral Resources (DMR) in response to Oxpeckers requests under the Promotion of Access to Information Act (PAIA) exposes a system of mine closure in which large operations rarely apply for closure certificates and almost never receive them. Without a closure certificate, liability cannot transfer from a mining company to the government and a mine is not considered legally closed.

Data derived from the documents depicts the largest miners in the country holding the vast majority of financial provisions for rehabilitation. However, as some extractive industries plateau or contract, junior miners that operate on slim profit margins and often hold insufficient funds for rehabilitation are replacing the major mining houses.

Open data: Use this spreadsheet to find details about mine closure certificates and financial provisions for rehabilitation across South Africa. Data in the first 17 sheets was obtained from the Department of Mineral Resources by Mark Olalde, with additional assistance from the Federation for a Sustainable Environment. Data in the final sheet was obtained by DA shadow minister for minerals James Lorimer through a Parliamentary Q&A request.
Clicking the “Download” button will download the entire dataset in Microsoft Excel, while the dataset can be printed with the “Print” key.

Throughout the country, R45-billion was held in financial provisions for rehabilitation as of 2015, according to the DMR. Companies are required to set this money aside before obtaining mining licences. Once a mine is rehabilitated and closed, the money is returned. If a mine is abandoned, the department has the right to take these funds and use them for rehabilitation.

The largest funds are put up by holders of mining rights – one of three types of mining licences – which are larger than 5ha and can operate for decades without applying to renew the licence. The other two types are mining permits, which cover mines smaller than 5ha that must renew their permits every few years, and prospecting rights. Because of this definition, experts say certificates granted to mining rights carry the most weight.

Analysis of the documents obtained through PAIA requests, as well as information revealed in Parliament in response to questions from the Democratic Alliance, found that 803 closure certificates were issued across the country between 2011 and 2016. Of those, 88% went to prospecting rights, mining permits or borrow pits and other work associated with highway construction. 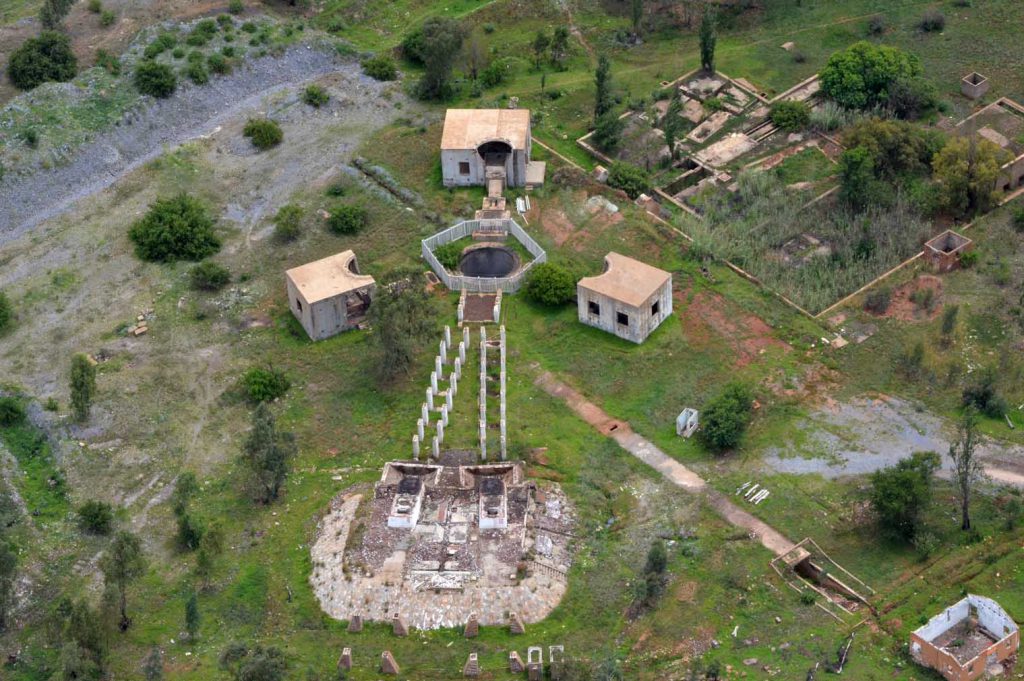 The Blyvooruitzicht Gold Mine in Carletonville has no closure certificate and has been abandoned since 2013, but the PAIA documents show the mine’s rehabilitation fund sits at about R35-million

Problems in the system

In the Free State, companies hold approximately 1,125 financial provisions for rehabilitation with a combined value around R5.4-billion. The largest 5% of the provisions comprise nearly 99% of the total funds. This means the remaining 95% of provisions hold, on average, less than R60,000.

However, of the 221 closure certificates granted in the Free State between 2011 and 2016, only one went to a mining right not associated with road construction.

The trend holds true in Gauteng, as well. Of the 628 bank guarantees – one type of financial provision – worth a combined R3.4-billion in Gauteng, the largest 5% account for 83% of all funds. The remaining bank guarantees average just less than R1-million.

Of the 15 closure certificates granted between 2011 and 2016 in Gauteng, zero went to mining rights.

While many companies include their financial provisions in the sales of mines, whether a rehabilitation fund is passed on to the buyer is dependent on individual terms of the sale, the department said in a statement.

“This will depend on the parties structuring a commercial transaction. The department’s role is to ensure that the state is not exposed to the risk of inheriting environmental liability in the long run,” the statement said.

The Blyvooruitzicht Gold Mine in Carletonville, Gauteng, for example, has no closure certificate and has been abandoned since 2013, when a sale between DRDGOLD and Village Main Reef fell through. The liquidator and activists failed to gain access to Blyvooruitzicht’s financial provision, which is still managed by DRDGOLD personnel.

The PAIA documents show the fund sits at about R35-million, a level DRDGOLD admitted was vastly inadequate to clean up the mine. Several mining executives currently face criminal charges relating to environmental transgressions at Blyvooruitzicht.

On the West Rand, Mintails Mining South Africa holds three mining rights, which cover 1,715ha near Krugersdorp and operate in business rescue. The business rescue plan shows that Mintails requires about R259-million to complete rehabilitation on those rights – a figure that is far too low, according to the environmental management programme report. The PAIA documents reveal that the company and related entities hold less than R17-million in funds for rehabilitation. 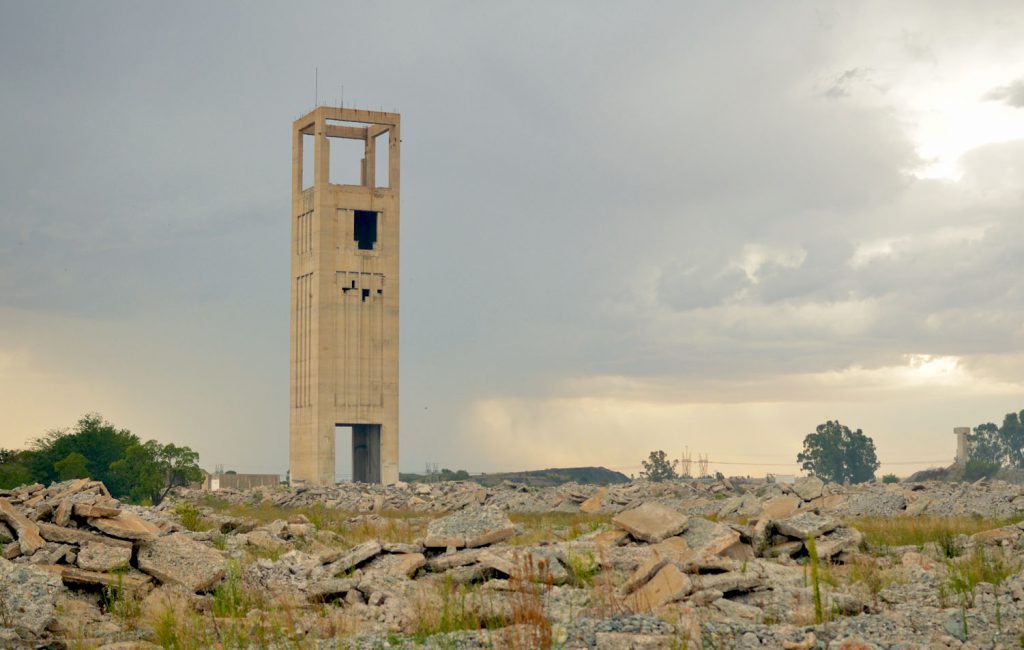 A mine shaft rises from the ruins of a former gold mine outside Welkom. Documents indicate that more than R5-billion is held in mine rehabilitation funds in the Free State, and the operations with the largest 5% of the funds account for 99% of that money

According to Department of Environmental Affairs statistics obtained by Oxpeckers, 40% of operational mines held inadequate financial provisions in 2012/13. This insufficient provisioning was in part due to the fact that the guidelines for calculating financial provisions have not been updated in more than 12 years. Exacerbating the problem, legislation does not allow funds to be used for concurrent rehabilitation.

The information from the environment department also sheds light on the confusion and lack of oversight involved with the granting of closure certificates. The department was told 575 applications for closure certificates were under consideration and 159 were issued in 2013/14 – however, according to answers the Department of Mineral Resources (DMR) provided in Parliament in response to questions from the Democratic Alliance, only 102 were issued that year.

The Western Cape and North West were the only DMR offices that failed to provide information in response to the Oxpeckers’ PAIA requests by the time of publication. The Mpumalanga and Limpopo offices handed over information relating to closure certificates, but they indicated a refusal to include information regarding financial provisions – in contravention of the national office’s legally binding decision to grant the requests.

The Northern Cape’s Springbok regional office provided a list of all closure certificate applications and all granted certificates since the Mineral and Petroleum Resources Development Act took effect in May 2004. Those records highlight the learning curve associated with new legislation. Between 2004 and 2008, companies applied for closure at only 13 sites.

A total of 184 mines applied for closure in Northern Cape’s Springbok region since the implementation of the minerals act, and 124 were issued closure certificates. An official from the Springbok office told Oxpeckers that the DMR must wait for the Department of Water and Sanitation’s comments on closure applications before granting certificates, a process that is often slow.

Listen: Mining law expert Professor Tracy-Lynn Humby from the University of the Witwatersrand explains the One Environmental System

Laws governing environmental management of the mining industry are shifting with the advent of the One Environmental System (OES) in December 2014. The new system was created with the goal of streamlining environment regulations by bringing together the DMR, the DEA and the Department of Water and Sanitation.

Marthán Theart, an attorney at the Centre for Environmental Rights, has been closely following the evolution of the hotly debated financial provision regulations, an integral aspect of the new OES system.

“The new financial provision regulations provide for a fund that is big enough to cover three types of rehabilitation: annual rehabilitation and remediation, the decommissioning of a mine, and latent or residual impacts of a mine – in other words, the risk of acid mine drainage,” Theart said.

In an imminent round of amendments to the provisions, the DEA plans to roll back its inclusion of “care and maintenance” oversight – a term the industry created to explain indefinitely mothballing unproductive mines – due to a belief held in the department that this oversight oversteps its mandate. The department is also considering removing the requirement that prospecting rights hold financial provisions.

In a statement sent to Oxpeckers, DEA spokesperson Albi Modise said: “Legislation and its implementation is generally an iterative process and therefore the system had to be tweaked to ensure that smoother operation was achieved.”

The National Water Act is also in need of updating, as aspects of the recently published amendments to the water use licensing process remain “very vague”, Theart said.

The Department of Water and Sanitation did not respond to repeated requests for comment on its role in the OES. The DMR only addressed some of the questions Oxpeckers sent for this story and did not comment on the implementation of the OES.

Modise said further amendments were necessary to comply with the Income Tax Act, to remove “restrictions on the use of trust funds” – another type of financial provision – and to provide “guidance on the manner of calculating the sum required to be set aside for financial provisions”.

In the meantime, it is unclear which laws apply. “The transition is not going very smoothly,” Theart said. “There is a big gap, and I think that gap is probably going to be filled by just applying the old regulations of the [Mineral and Petroleum Resources Development Act] that haven’t been repealed.”

In response to the OES regulations on financial provisions, members of the mining industry, including DRDGOLD and Sibanye Gold Limited, launched litigation in late 2016 against the three relevant government departments and others.

The court application – which Theart called “gun to the head litigation” – seeks to clarify aspects of the regulations, including how mine closure trust funds can be used, the tax implications of transferring funds among different types of financial provisions and clarifying environmental liability.

Tracy-Lynn Humby, a law professor at the University of the Witwatersrand and an expert on the legislation governing mining, said it is still too early to determine whether the OES will be a success, as the legislation needs to be fine-tuned.

“[The DEA] had a lot of pushback from industry. This is the single environmental system being tested,” Humby said. “Is this really a more sustainable solution or is this simply business as usual but with a green veil?” – oxpeckers.org

• Read Mine closures: what’s happening in your back yard?