Calls for a special wildlife crime court in Namibia 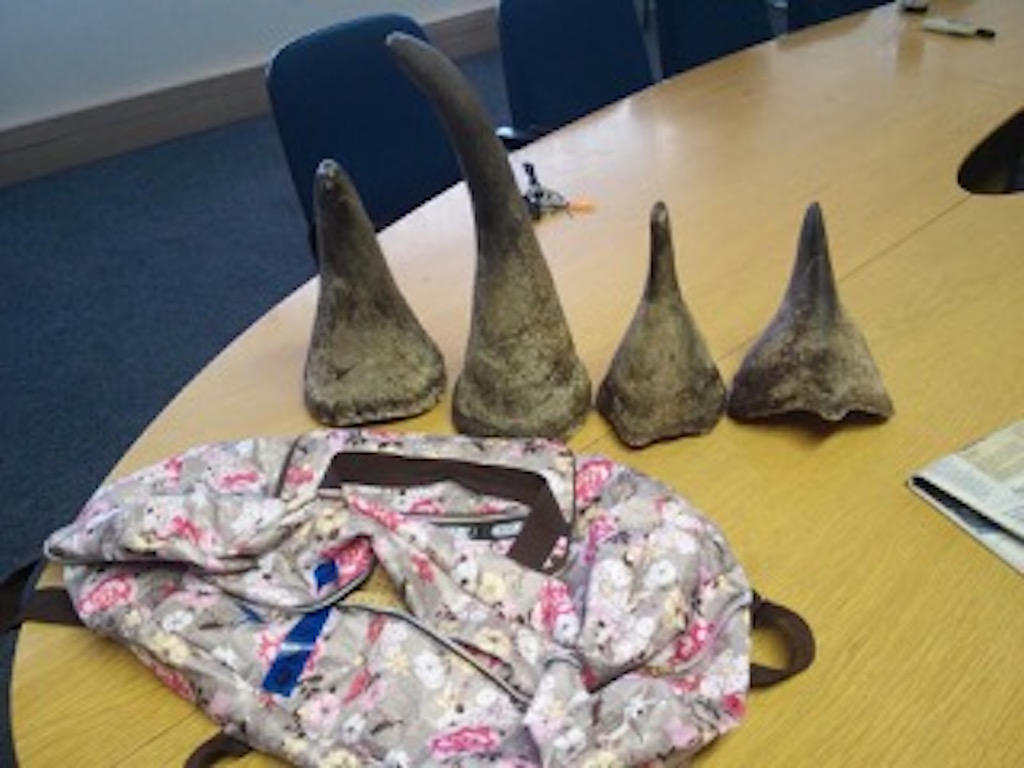 24 Feb Calls for a special wildlife crime court in Namibia

Namibia’s over-burdened criminal justice system is struggling to keep up with rhino-poaching court cases, some of them delayed by up to six years. Is a special wildlife crime court the answer? John Grobler investigates

Bling sting: Evidence produced in the case of Mox Namwandi and Darius Shaalukeni included four rhino horns believed to be from black rhinos. Arrested in June 2016, the case was again delayed in January 2021 due to lack of legal funds. Photo supplied

In the war on organised wildlife crime in Namibia, the arrest of Angolan teacher Fortunato José Queta in Oshikango on the Angolan border was some good news.

Queta was snared in August 2019 in police operations pursuing a group of seven suspects who had broken into a private lodge’s strong room to steal 33 rhino horns – derived from de-horning – in May that year.

“He was the first level four operator ever caught in Namibia, and it was a major breakthrough” that led to more arrests of what is considered the biggest rhino-poaching and horn smuggling syndicate active in Namibia, said Jo Tagg of the Rooikat non-governmental organisation, which works with the authorities in gathering intelligence on poaching.

Five of the Namibian suspects arrested in the case were granted bail – only for one to be arrested several months later on the South African border while trying to smuggle two of the stolen horns into South Africa.

What was key to the Queta case was the conspiratorial element, said Tagg – a difficult legal hurdle to cross with outdated legislation and a burden of proof that favours suspects.

Queta was not granted bail – for good reason, it emerged in his High Court application for bail in August last year. In testimony led by Inspector Felix Ndikoma, it emerged that Queta was the main middleman between Namibian rhino-poaching syndicates and an Ondjiva-based Vietnamese buyer named as David Somni.

He had also been dealing in rhino horn with “bling king” Mox Namwandi and disgraced Inspector Haipa, the former commander of NAMPOL’s Protected Resources Unit in Oshakati, Ndikoma testified in court.

Queta exploited weak border controls to move his contraband into Angola from northern Namibia, and was potentially the main buyer of rhino horn from the more than 400 black rhinos poached in the Etosha National Park since late 2014, it emerged from the bail hearing.

Queta faces charges of illegal trade in rhino horn, related conspiracy and money-laundering charges under the Prevention of Organised Crime Act, as well as charges of illegal entry into Namibia. His case goes to trial in the Windhoek Regional Court on February 26 2021.

His case has highlighted the major logistical and administrative obstacles in Namibia’s anti-poaching strategy in a vast and sparsely populated country where most cases are reported in the rural, impoverished northern regions and spread out across the width and length of the country.

Justice on hold: The Outapi Magistrates’ Court, where several of the older cases have been languishing for years. Photo: John Grobler

Intelligence-driven police work and pre-emptive arrests have seen a major reduction in Namibian rhino poaching over the past two years, according to the Revised National Strategy on Wildlife Protection and Law Enforcement released by the Ministry of Environment (MET) in early February 2021.

The report recorded a sharp increase in pre-emptive arrests in wildlife poaching instances involving high-value species, increasing from 561 arrests since mid-2018 to 1,352 by the end of 2020.

However, an over-burdened criminal justice system struggling to keep up with cases – some of them delayed by up to six years – indicates the urgent need for a specialised wildlife crime court, say state prosecutors and police.

The Oxpeckers Rhino Court Cases tracking tool maps information about 49 cases that made it to court between 2014 and 2020. Of these, only seven resulted in convictions. Three of the most recent cases to be finalised centred on conspiracy to hunt rhinos, and sentencing ranged from a suspended sentence of 24 months’ imprisonment to a choice between paying a fine of N$50,000 or jail time. Of the eight suspects involved in these more recent crimes, one was acquitted and walked free. Most of the accused faced multiple charges, with possession and the sale of rhino horns – poached and/or stolen – as the most common charge.

Data shared by the Blue Rhino Taskforce, a multi-departmental initiative introduced by the MET in mid-2018, show their investigators have had to attend 1,595 court hearings related to wildlife crimes over the past five years. Currently there are 392 ongoing cases and the taskforce would be filing several more in the coming months as its investigations are paying off, said the Blue Force commander, Chief Inspector Barry de Klerk. 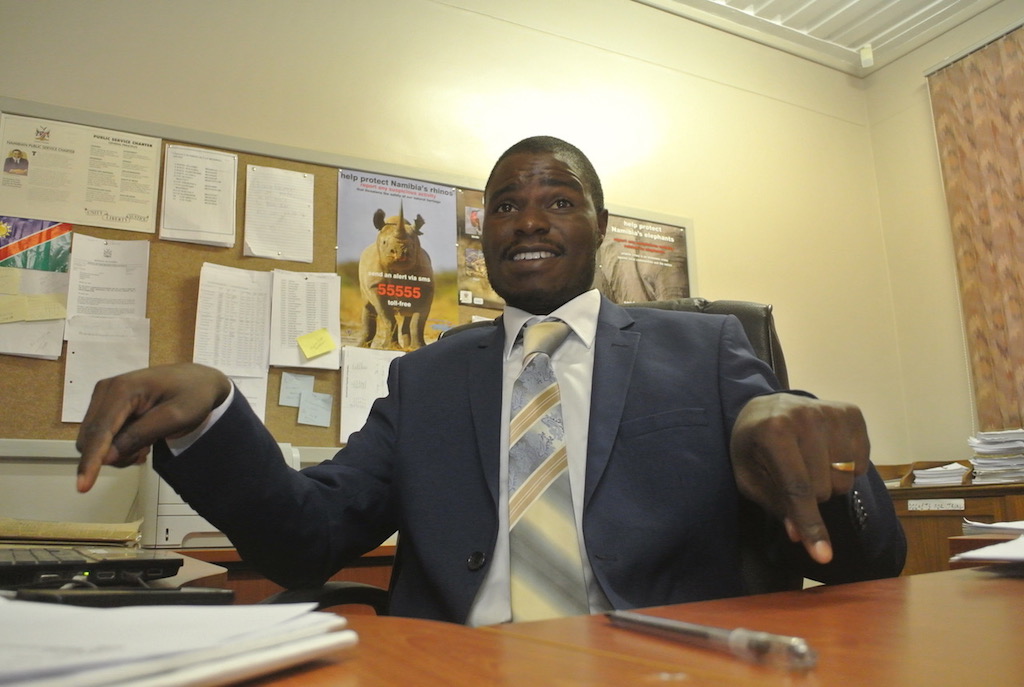 Difficulties in obtaining DNA or ballistic results in time for hearings due to inadequate resources were also a major problem, he said.

“Accused persons often delay [proceedings] to appoint lawyers or hire and fire lawyers before or during the course of the trial,” said Musondeka. “Sometimes one accused doesn’t turn up for trial in a case with multiple accused persons and the trial is postponed” – a waste of scarce financial resources when out-of-town witnesses have to attend such trials.

“Lawyers themselves are not readily available and when postponing cases, we have to get a date that suits the lawyers involved. If more than one lawyer is involved, you may find that both can only be available in six months’ time, or in a year’s time,” Musondeka said.

“The courts also have their own diaries clogged with many other cases and getting a date which suits the court, the lawyers and possibly the expert witnesses isn’t easy.”

Musondeka said serious wildlife crimes such as rhino poaching are conducted at regional court level, “which do not allocate enough time, given the legalities and logistics involved. For example, the Oshakati Regional Court B sits at Outapi, Ondangwa and Opuwo”, comprising four major regions where wildlife crimes mostly occur.

Matters are often complicated by suspects out on bail then committing further crimes. For example, former national soccer team medic Gerson Kandjii, facing criminal charges related to the poaching of four black rhinos in Namibia’s Etosha National Park, was involved in a rhino-related murder less than a year later. (See Namibia’s national soccer medic linked to rhino poaching and murder.) And “bling king” Mox Namwandi, first arrested for possession of rhino horn in 2016, was arrested for attempting to defraud the Ministry of Finance in 2017.

The Blue Force data shows that rural poverty is a major driver of wildlife crime, with Rundu, regional capital of the Okavango Region and on the border with Angola, emerging as the major hotspot, followed by Katima Mulilo, Outapi and Windhoek.

Namibians accounted for the vast majority of wildlife crimes recorded by the taskforce. Of 1,376 wildlife crime cases (579 involving high-value game) recorded since 2015, a total of 1,176 involved Namibians (85%), followed by Angolans (6%) and Zambians (3%).

Contrary to popular supposition, only two Chinese suspects (one in jail, one on bail) and one Vietnamese suspect (in jail) are currently awaiting trial for rhino-related crimes. Nine Chinese suspects have been convicted and sentenced while four have absconded.

The courts have not been soft on the Chinese suspects: when the first four convicted in 2016 appealed their 14-year jail sentences in the Supreme Court last year, the chief suspect Wang Hui was slapped with an additional six years for money-laundering.

Increased fines for rhino poaching of up to R25-million and jail terms of up to 25 years since June 2017 appear to have been of little deterrence, with 219 cases of rhino poaching reported since 2017.

Long road: The Okahao Magistrates’ Court in northern Omusati region, where most of the known Etosha National Park poaching cases first appeared, including that of former national soccer team medic Gerson Kandjii. The court only works half-days as most of the staff live in Outapi, 140km north. Kandjii is also charged in the Gobabis Magistrates’ Court, nearly 1,000km away. Photo: John Grobler

The Blue Rhino Taskforce’s strategy on wildlife protection and law enforcement proposes that a specialised wildlife crime court be created to deal with this specialised form of organised crime.

In South Africa, a dedicated environmental court dubbed the “green court” was set up in the Western Cape in 2003 to prioritise cases of illegal fishing, including abalone poaching.  It functioned as a regional court and had an 85% conviction rate in 2005, a year before the Department of Justice decided to close it, and all other specialised courts, unless they were mandated by a specific law.

Since then there have been calls for the reintroduction of specialised environmental courts to deal with both wildlife and water crimes in South Africa.

Would such a proposal stand any chance in Namibia? Officials and experts spoken to remained quietly hopeful, but added that it would require a political will that currently appeared to be lacking.