The second recent court development followed the sensational arrest of a young, up-and-coming Windhoek businessman named “Mox” Namwandi. Who is he? John Grobler tracks his connections 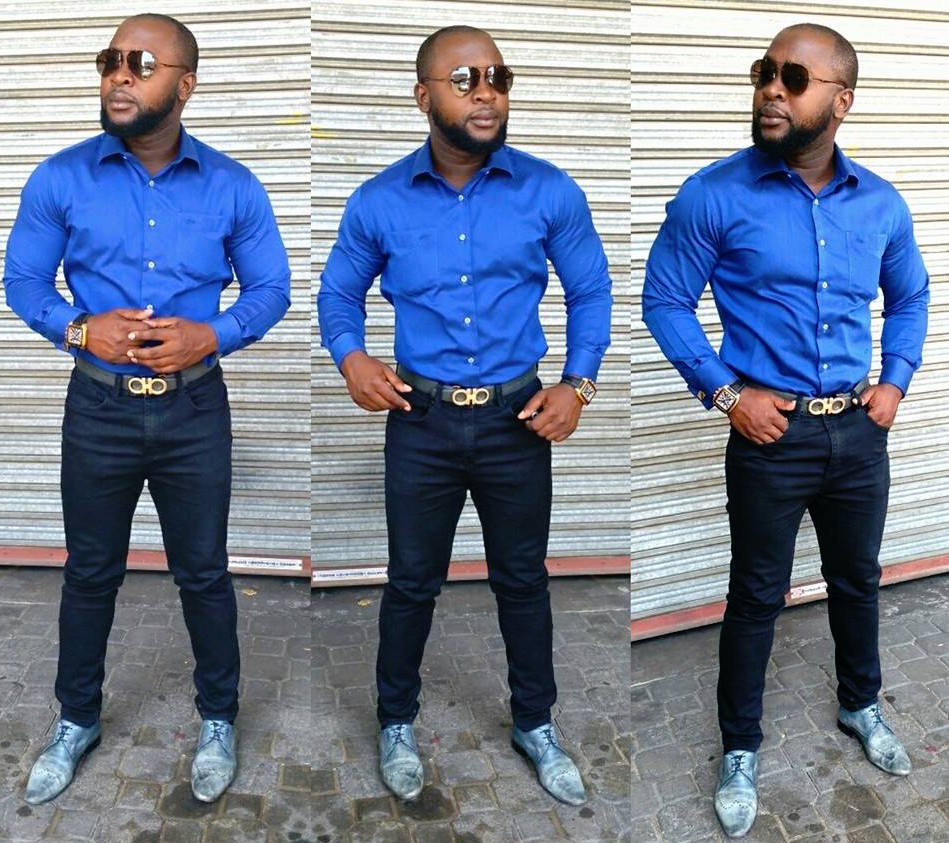 Mox Tangy Namwandi’s Facebook profile photo, posted on June 17, three days after the police sting operation. His nickname “Mox” comes from his own brand of hand-made shoe he was promoting

If the Ministry of Justice is in a hurry to bring an end to poaching of Namibia’s critically endangered black rhinos, it is doing a good impression of dragging feet and of deafness to calls from the Ministry of Environment and Tourism for swifter, harsher measures against poachers.

Two non-events last week illustrated how a dead hand was seemingly at work in the bureaucracy of bringing resources to bear in the battle to save what is left of 40% of the world’s remaining critically endangered black rhinos.

The first was on Wednesday when the long-awaited verdict of four Chinese citizens arrested two years ago at the Windhoek international airport with 14 horns in their luggage was postponed to July 15. Regional magistrate Alexis Diergaardt said she was not ready yet with her written judgment – the result of a crippling workload in Namibia’s lower court system.

The four Chinese citizens, all originally from Nan Tong area of the Yangtze River mouth in China (see “Who are Namibia’s Chinese smugglers?”, have been tried on charges ranging from illegal possession of rhino horn to money laundering. Wang was arrested in May 2015, more than a year after the first three were detained at the Windhoek airport with 14 rhino horns and a leopard skin crammed into two suitcases.

The second incident last week involved the sensational arrest of a young, up-and-coming Windhoek businessman named “Mox” Namwandi and one Darius Shaalukeni in a police sting operation on June 14 this year. The police found four horns, believed to be from black rhinos, in Namwandi’s flashy black Mercedes Benz 63 AMG, but would not release further details.

Namwandi’s arrest came as a surprise to everyone, including the police: after four years of sharply increased poaching by what is believed to be at least four syndicates operating in Namibia, the police so far had mostly arrested lower-level local poachers. Only one person, arrested in 2012, was currently in jail for rhino poaching.

Since 2012, at least 150 black rhinos out of an estimated population of 1,800 animals have been confirmed as poaching cases. Natural mortalities, exacerbated by a crippling four-year-long drought, may have killed another 100 or more. Early this year, 34 carcasses, including seven fresh ones, were found inside the Etosha National Park, in spite of increased patrols since late 2014. 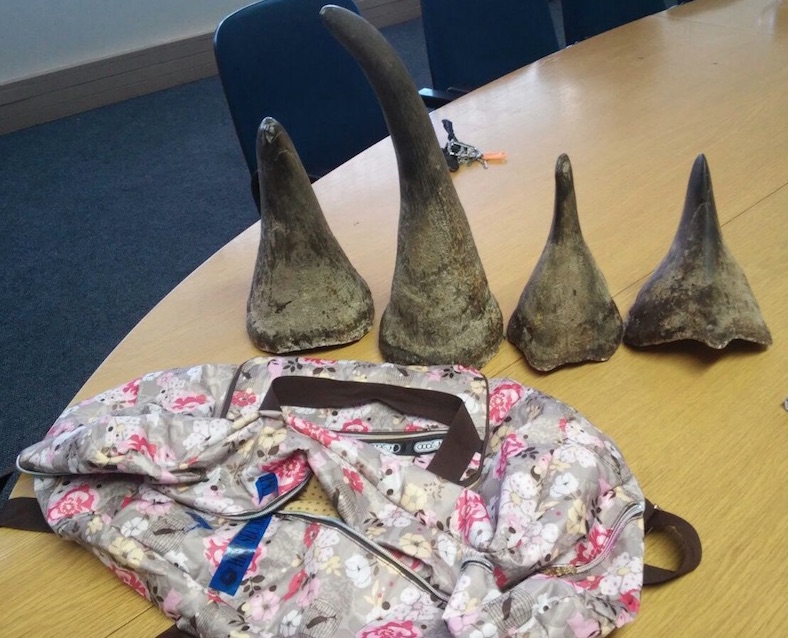 The handbag and four horns found in Namwandi’s trademark black Mercedes Benz 63 AMG. They could be confiscated if Namwandi is charged under the Prevention of Organised Crime Act

Namwandi and Shaalukeni’s bail application on Thursday was a well-dressed non-event: bail had been previously agreed to between the state prosecutor and the two accuseds’ lawyers, set at N$50,000 and paid later that day.

Namwandi, dressed in a designer black suit and sporting a massive red and gold watch on his right arm, fidgeted and frowned unhappily for the benefit of his blinged-up supporters in the packed courtroom. His co-accused, the more hapless-looking Shaalukeni, seemed uncomfortable and sheepish in a cheap T-shirt and tracksuit pants, wringing his cap occasionally.

Reaction to Namwandi’s arrest came from a group of similarly well-connected and well-dressed “black diamonds”, some of whom seem to have been “blessed” by Namwandi, according to their posts on his public Facebook account.

News on the arrest reported in the media was followed by cries of victimisation on social media, not least because Namwandi is close friends with Imms Nathinge, a member of the radical Affirmative Repositioning land reform movement.

Others who know him personally had an “A-ha!” moment: after being dismissed from a previous job for proposing corrupt business, he opened his own printing works in 2008 and started flourishing financially well beyond what a small printing business could bring, they suggested.

Namwandi was soon acquiring properties, businesses, luxury cars and beautiful women to bless, commented those who know him.

Sources close to the investigation said he was the nephew of former City of Windhoek property manager Lazarus Shaduka, who fled to Angola in December 2014 after the Supreme Court confirmed his conviction of murder for shooting his wife in the back of the head. Shaduka remains at large.

Namwandi and his partner in the printing business, Naftali Shailemo, also own equal shares in Mannax Mining, a company that has held two mining licences in the southern Kunene region since 2014. Significantly, these licence blocks both fall within the rock desert natural habitat of the world’s last few southwestern black rhinos, hit hard by poaching since 2014. (See “Caught in the crossfire: how cattle and mining interests are killing off Namibia’s black rhinos“)

A few hours of observing Mannax Printing and Design CC offices in Windhoek’s South Industrial area showed luxury cars coming and going – all of which seemed to belong to the beautiful female employees of Mannax. One of them called him a “blesser” on her supportive comment to his last social media posting, made three days after he was arrested on June 14.

Namwandi’s own Facebook page was completely dedicated to himself and his tastes in expensive designer clothes, hence his nickname “Mox”, after his own brand of hand-made shoe he was promoting. Like his lawyer and many others in his circles, he dresses impeccably, promotes a healthy lifestyle and an Islamic-style beard.

A visit to his registered address – a somewhat rundown property in an otherwise neat middle-class suburb, with two young pit bulls in a litter-filled back yard – shed little light. Neighbours said they had no idea who lived in two houses traced to him and his partner in Mannax Printing.

So, is Mox Namwandi an innocent man set up, as his supporters claim to be the case?

A former senior state prosecutor explained that there were rules of evidence that had to be followed in the case of setting up police sting operations. These included taking statements under oath, and ensuring in general that crime was not being commissioned by the police themselves, he said.

Sources in the police said they were as surprised as anyone else at information seemingly prompted by a reward of R1-million for tip-offs leading to poaching arrests. Regular radio broadcasts promoting the bounty seemed to have reached the right ears somewhere – but, as big fish go, Namwandi was not the syndicate boss.

“Let’s just say that he’s the knees holding up the rest of the body,” commented one police source.

For now, the police Protected Resources Unit is officially not saying anything: sting operations are always controversial and defence lawyers know the weaknesses. Bad stuff was in the air last week and everyone was keeping the lowest profile possible.

Namwandi’s arrest, if it ever gets to trial, has sent deep but still undetected shockwaves through this small and tight-knit society based on kin, clan and complete belief in Swapo. Just how deep those waves will have to travel before the earthquake is felt will depend on how deep the official investigation will be allowed to go.

And the main indicator will be if all the witnesses turn up when required and are willing to testify in an open court: last time a case like this was tried in court in 1995, the state’s sole witness withdrew his evidence at the first opportunity.

The magistrate ordered Shaaluekeni to hand in all travel documents and not leave the regions of Kunene, Omusati, Ohangwena and Oshona without the knowledge of the investigating officer.

That he was to report three times a week to the Ohangwena police station seemed superfluous: Kunene, Ohangwena and Omusati all border on Angola, and Shaalukeni, as a local resident, can legally cross the border with just a note from a friendly chief attesting to his identity.

What easier way for a case to get dismissed than because one of the two key accused had absconded? – oxpeckers.org