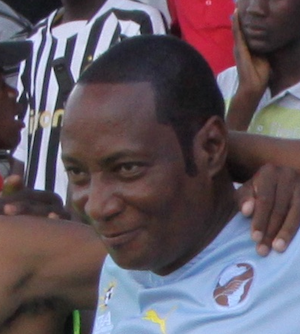 Posted on 6 Mar, 2015 by Oxpeckers Reporters 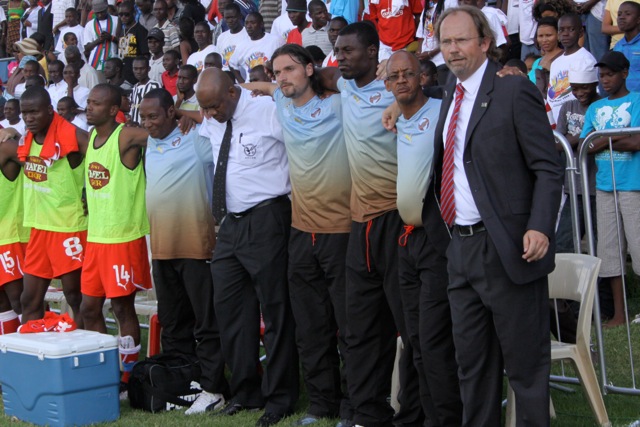 Kandjii, until recently team doctor to the Namibian national soccer team, and four co-accused were not asked not plead when they appeared in the Mariental lower court on Thursday. The case was postponed to May 5 to allow them to obtain legal representation, according to court records.

Kandjii and three other, different suspects were arrested in November last year and charged with the poaching of critically endangered black rhinos in Etosha.

He was granted R20 000 bail in early January by the Okahao magistrate’s court, before a ballistics test positively linking his personal hunting rifle to the Etosha poaching became available, officials said.

The second arrest came after an extensive manhunt was launched last Friday following the discovery of Schmidt’s gagged and bound body in the house on his private hunting farm Hoodia outside Kalkrand, about 200 kilometres south of Windhoek.

Schmidt was believed to have suffocated to death after his attackers had tied him up and taped up his mouth and nose, police told local media.

The rifle was equipped with a silencer and high-powered telescope, as was a second, unlicensed rifle seized from the third suspect, Daniel Nghidinua, arrested when he arrived in the area in September.

Nghidinua had also been granted bail by the Okahao magistrates court, as the evidence – apart from possessing a firearm for which he had no licence – was thin, Mpofu said.

“The ballistic linking Kandjii’s gun to the rhino poaching in Etosha was unfortunately not yet available,” he said. The entire case was moved to Outapi as a precautionary measure, he confirmed.

In the Outapi docket, he was charged along with Daniel Nghidinua of Omakufo village, his nephew Stephanus Dawid of Peneyambeko Court in Windhoek, and Martin Andami Kaninga of Okatjete for the illegal hunting of a protected species, as well as the illegal possession of a rifle and ammunition.

Kandjii and his co-suspects in the Outapi case pleaded not guilty. His nephew and another suspect brought a bail application as well, postponed to March 12.

Police sources said charges in connection with Schmidt’s murder were still being formulated, after the suspects were taken the scene of the crime this week.

Goods stolen from Schmidt’s farmstead had since been recovered after the suspects had sold them.

Kandjii and his five accomplices were also linked by police investigators to a mid-February farm attack near Aranos, about 150 kilometres south-east of Kalkrand.

In that case, five men had gained access to the Sandvlakte farmhouse of Johan Vermeulen, who was pistol-whipped, tied up and robbed of cash and valuables, including a vehicle that was later abandoned near Stampriet.

Domingos and Nakapandi were suspected of leading the attack on Schmidt, while Kandjii and Stephanus (who also appeared to be a relative) had driven the get-away vehicle, sources close to the investigation said.

More firearms and expended ammunition were seized from the suspects, which could lead to further breakthroughs in the ongoing rhino poaching cases elsewhere, sources said.

Last year 27 Kunene black rhinos died. This critically endangered population is recognised as a sub-species of rhino because of their adaption to the harsh desert conditions in the region

Kandjii and three of his four co-accused in the rhino poaching case were first apprehended in late September in the Kamanjab district by local police after locals became suspicious of their behaviour.

PRU commander Barry de Klerk said although a rifle with silencer and telescope and a large amount of cash was found in their vehicle, no proof of any crime committed could be immediately found as the firearm was licensed to Kandjii.

His nephew, Dawid Stephanus, was caught with Kandjii’s rifle in his possession later in November, leading to Kandjii and Kaninga also being arrested in due course of investigations.

Gun licences were not transferable, Mpofu pointed out in an interview in Outapi last week.

Investigators said he had arrived in the area with a hunting rifle equipped with a telescope and silencer, as well as an axe, knives and a picture of a rhino, and had wanted to know where to find rhinos.

Kamanjab is en route to the lower Kunene region and the communal conservancy areas where the world’s last free-roaming black rhinos have been heavily poached since late 2012.

According to the official Ministry of Environment and Tourism (MET) mortality data for Kunene, at least 20 critically endangered black rhinos were poached in this region between 2011 and December 2014.

In 2013, 16 Kunene rhino – recognised as a sub-species for their adaption to the harsh desert conditions in this region – were reported to have died in the Kunene, one of which was poached.

In 2014, 27 Kunene black rhinos died, 16 of which had been poached, according to the MET data, as compiled by the Save the Rhino Trust (SRT), an NGO that had been doing rhino monitoring since 1983 in the area.

These figures, however, excluded the four Etosha black rhinos (for which Kandjii and his co-accused are now facing charges), as well as three more black rhinos poached at the Uukwaluudhi Lodge in August last year. A fourth rhino bull had to be put down because of the severity of its injuries.

No further poaching was reported since late December, when certain internal reforms were implemented at the SRT and joint patrols with MET and special field force staff increased.