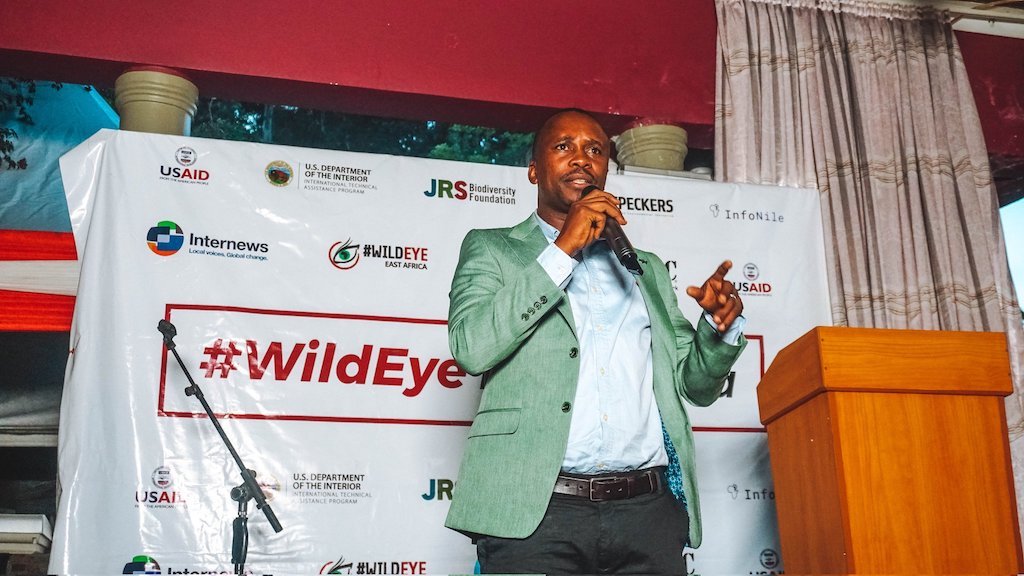 Posted on 6 Jul, 2022 by Oxpeckers Reporters

Journalists and investigators finally have a single place to access data on wildlife cases in East Africa that will help drive reporting and expose criminal syndicates, writes Andiswa Matikinca

‘Journalists, this tool was made for you’ – InfoNile co-founder and editor Fredrick Mugira at the launch in Uganda. All photos courtesy of InfoNile

The most recent addition to the Oxpeckers suite of #WildEye digital tools – the pioneering platforms that track environmental crime across the globe – was launched at a vibrant and colourful event in Fort Portal, Uganda, on June 29 2022.

#WildEye East Africa is a geo-mapping tool that tracks and shares data on court cases and convictions related to wildlife crime in the region. Developed by Oxpeckers Investigative Environmental Journalism in partnership with InfoNile, and supported by the Earth Journalism Network, it was designed by journalists for use by journalists, conservationists and policy-makers.

A series of journalistic investigations based on the data aggregated by the platform were featured at the launch in Uganda. These had been published by the project partners as well as regional media houses, and provided examples of how #WildEye data can be used in investigations.

“Journalists, this tool was made for you – explore it,” said InfoNile editor Fredrick Mugira in his closing remarks at the launch, which took the form of a combined online webinar and high-profile in-person evening of celebrations. Those in attendance included 10 regional editors from Ugandan media houses along with participants attending an extended workshop facilitated by the InfoNile team on data journalism and geo-journalism. 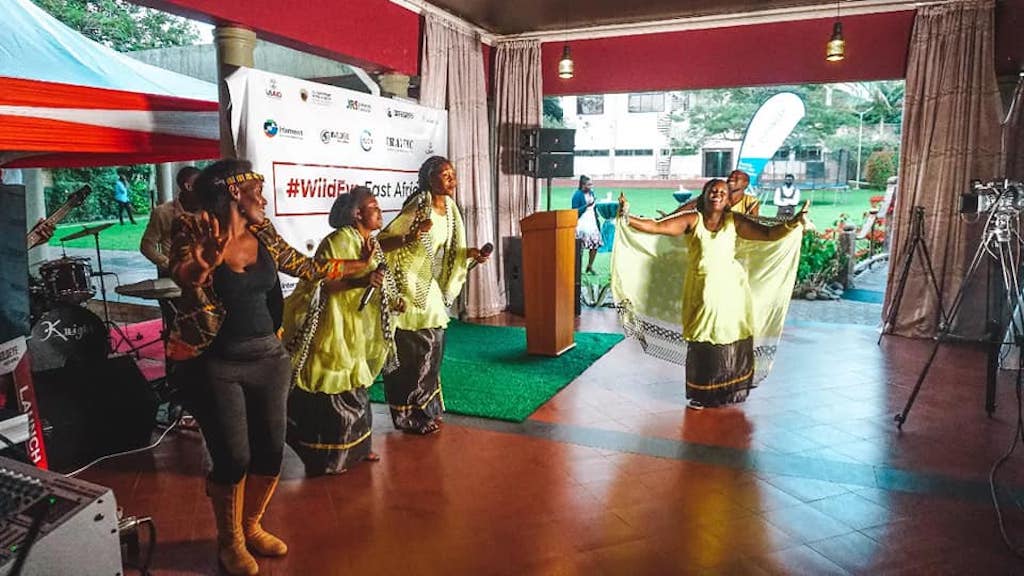 The East Africa version joins a suite of #WildEye data-driven tracking tools in Asia, Europe and Southern Africa. Together they address a major challenge facing wildlife crime reporters and investigators: the fact that information on these types of activities is hard to find and even harder to track over time, and across borders. This has allowed criminal activity to remain hidden from public scrutiny and hindered reporting on the multi-billion-dollar illegal wildlife trade.

“We’re proud to have developed a digital tool that anyone can use to find data on wildlife crime in East African countries,” said Oxpeckers editor Fiona Macleod, explaining how the platform highlights trends, gaps, and questions that journalists can use to build stories through court records, and freedom of information requests.

“Using data adds accuracy, credibility and transparency to wildlife crime reporting, and this kind of transnational collaboration between journalists will help to strengthen the media’s role in bringing criminal activities to light,” she said.

During the launch, Kenyan data journalist Sharon Atieno shared some of the difficulties she came across while collecting and collating data for #WildEye East Africa, and how she overcame them. Bureaucracy was one of the main restrictions to her accessing data, she said, so she had to think outside the box and often resorted to other mediums to find information on arrests, courts cases and convictions.

“I ended up getting data on convictions from the Kenya Law repository, it came through for me in a very big way because this information is basically what judges have put down on paper. I also had a good experience with using a platform called SEEJ-AFRICA [Saving Elephants through Education and Justice],” she said. 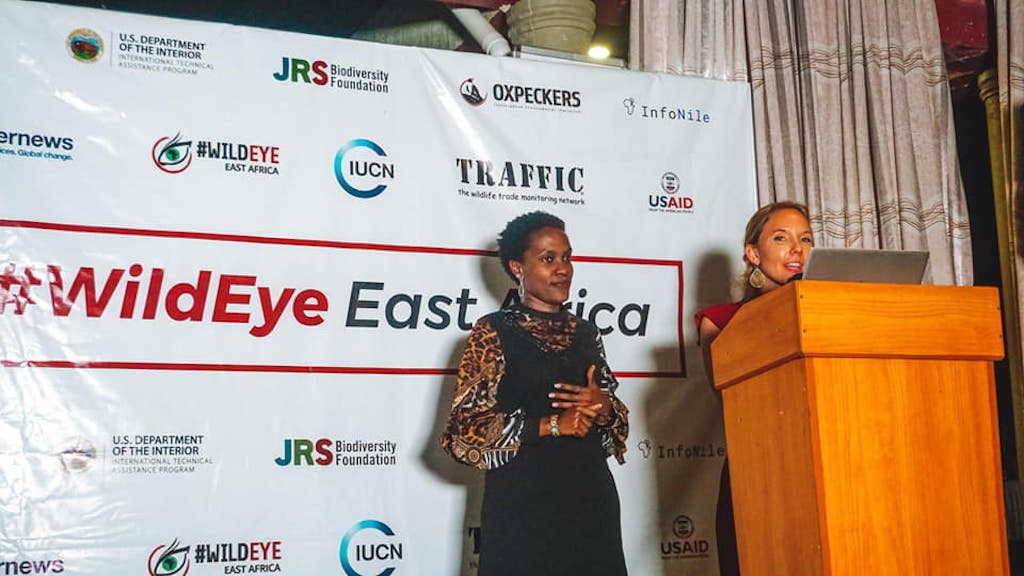 Ruth Mwizeere, programme and data officer at InfoNile, and Annika McGinnis, the unit’s co-founder and director, worked closely with the journalists throughout the project

The project teamed data journalists and investigative reporters in a collaboration extending across four East African countries: Rwanda, Kenya, Tanzania and Uganda. For Oxpeckers, it was also part of an ongoing professional support and training programme that aims to strengthen the capacity of all journalists to investigate and report on wildlife crime.

#WildEye East Africa currently shares more than 650 data points collated over eight months by the data journalists mentored during the project, and more points are continuously being added. The data was sourced from government agencies, law enforcement, wildlife conservation NGOs and media reports.

Eight investigative reporters used this data during investigations they compiled on a variety of wildlife topics in their respective countries, ranging from poaching of endangered species to crackdowns on wildlife traffickers. This series of data-driven investigations have been published both locally and internationally, with a few yet to be published in the coming weeks.

The investigations were accompanied by data analysis and visualizations that were produced by InfoNile using the data from the map. On the InfoNile site, all stories and dataviz are translated into either Swahili or French, depending on the story country.

Ugandan journalist Benjamin Jumbe, who investigated an increase in pangolin trafficking in recent years, had this to say about using the #WildEye tool as part of his investigation: “We have this challenge of wildlife crime and we really struggled with getting data or information from authorities such as the police, the judiciary and other agencies. But then with this tool we got great help to understand arrests made, particularly on the species we were reporting about.

“Journalists often hate working with numbers and if you find that it is difficult to access the information or difficult to break down the information for the ordinary person, then you’d rather drop it and go for politics where you write about what politician said what. Some editors also prefer going for that, but I am glad we also have editors who will get to appreciate data journalism to promote the conservation of wildlife – not just in East Africa but Africa as a whole,” said Jumbe. 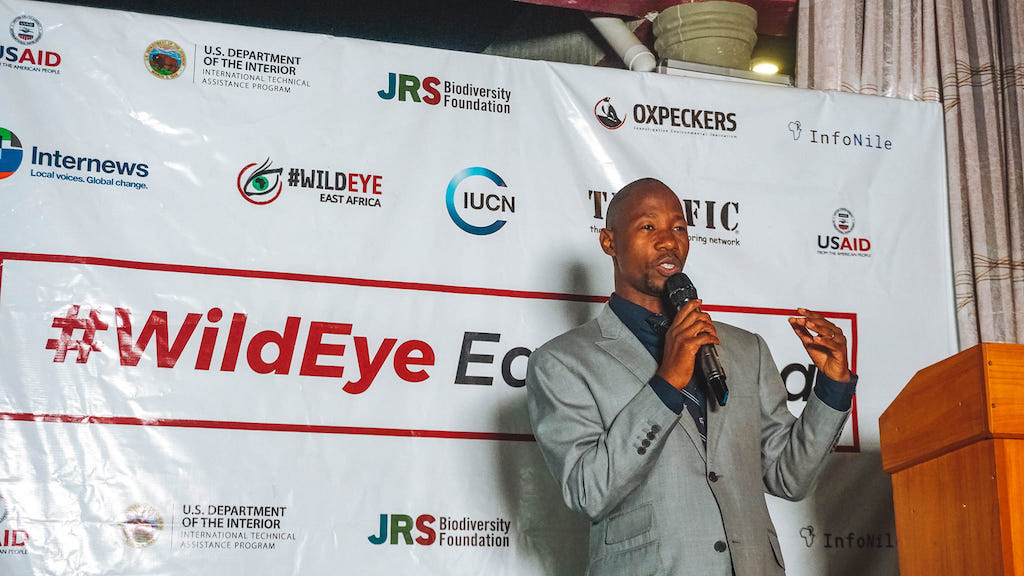 Analysis of the data by the Oxpeckers team shows that environmental crime in East Africa is on the rise, although there was a decline in 2020 and 2021. This decline can probably be attributed to COVID-19 and may also include difficulties around record-keeping and delayed court dates.

The top hotspots where environmental crimes were committed were Nairobi, Kampala, Mombasa, Dar es Salaam and Kwale, with the Democratic Republic of Congo, Burundi and Southeast Asian countries being the most popular thoroughfares or destinations. Some of the most popular items involved were ivory, tusks and meat, and most incidents recorded on #WildEye East Africa are convictions (43%), followed by arrests (34%) and court cases (23%).

Generally speaking, the punishments meted out by the courts for these crimes have increased over time and most sentences are monetary fines, with the possibility of going to prison if payment is not made.

#WildEye East Africa is now available for journalists and others interested in covering and following up on justice in action when it comes to wildlife crimes committed in the region. Users of the tool are able to tailor what they see on the map to suit their specific needs which include but are not limited to analysis, research and storytelling.

Journalists are encouraged to use the tool in their work and to give us feedback at any time. For any queries related to the data and the map, users can email wildeyeoxpeckers@gmail.com.

The #WildEye East Africa project is a partnership of InfoNile and Oxpeckers Investigative Environmental Journalism, with support from the Earth Journalism Network. Stories from the series of data-driven investigations are available here and here.