From Mozambique to China, money talks 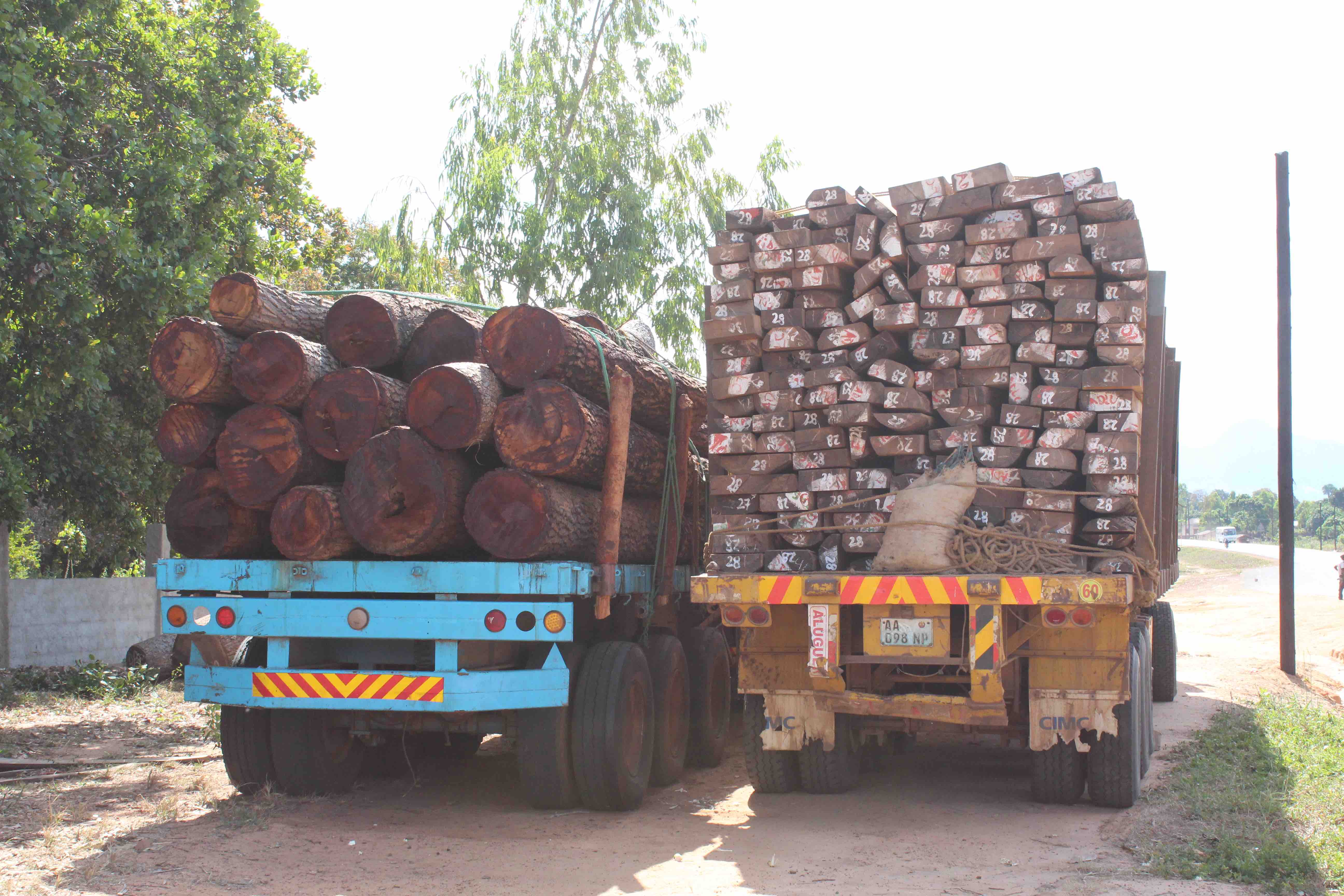 More than 90% of Mozambican timber is exported to China at less than its true value. Estacio Valoi uncovers collusion between shipping agents, customs officials and port managers 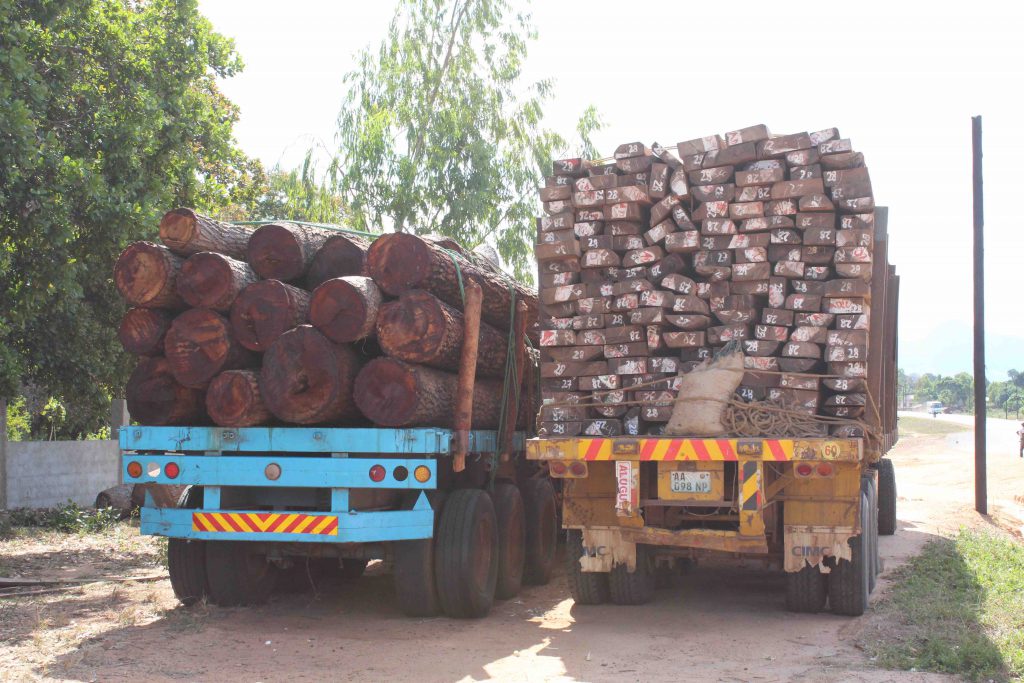 Truck loads of worked and raw timber on their way to a northern port. Photos: Estacio Valoi

Vast quantities of indigenous timber are being shipped from Mozambique to China via northern and central ports such as Beira and Nacala. After receiving tip-offs from sources working inside the harbours, this journalist witnessed evidence of illegal shipping involving shipping agents and customs officials colluding with port administrators.

Throughout a year-long investigation, one company with high-level ties to Mozambican Minister of Transport Carlos Mesquita emerged at the centre of these activities at Beira harbour: the Rotterdam-based Cornelder Holdings. Since 1998 the company has been a partner to Mozambique Ports and Railways in a joint venture known as Cornelder de Mozambique administration..

It is described by insiders as the “golden egg” to the Mesquita dynasty.

“All the cargo is strictly controlled by [Cornelder] administration… hundreds, thousands of containers. It is where their money comes from. Shipping,” said one official at Beira, who did not want to be named for fear of losing his job.

A report by the Ministry of Land, Environment and Rural Development (Mitader) analysing timber imports logged by China between 2005 and 2016 differs vastly – to the tune of some $950-million – from corresponding export data documented by Mozambican customs and the Forestry and Wildlife Services, the main entity overseeing timber exports. 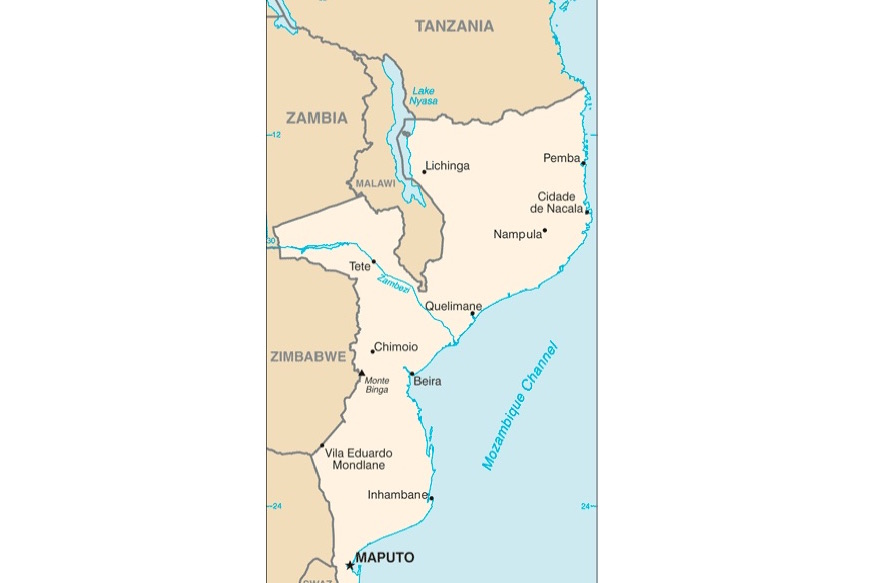 Export harbours: Beira in the centre of the country, and Nacala in the north, are the main timber smuggling ports. Map courtesy University of Texas Libraries

It is through Beira, the “primary gateway” managed by Cornelder, that much of this timber is exported. According to its website, the company maintains tight control over exports with surveillance equipment and CCTV cameras system installed at key points.

Sources working at the Beira harbour said this control has produced great wealth for the “Mesquita dynasty” and that for the owners of the port, “only money matters”.

“The port authorities are aware of everything happening,” said a source employed at Beira harbour.

Mesquita recently appeared before the Central Public Ethics Commission, set up under the Law on Public Probity, to answer concerns about an alleged conflict of interest involving a different company he partly owns.

His appearance related to a contract granted by the country’s relief agency, the National Disaster Management Institute, without a public tender, to the company Transports Carlos Mesquita Ltd (TCM). The minister is one of the owners of the Mesquita Group, the main shareholder of TCM, awarded the contract worth 20-million meticais (about US$296,000) in February this year.

Questions sent to Mesquita about his links to Cornelder and the allegations that the company is turning a blind eye to the shipping of illicit timber were not answered. Cornelder also did not respond to the allegations.

One illegal shipment of 1,500 cubic metres of wood destined for China was seized at the Beira port in October last year. Officials from Mitader and Forestry and Wildlife Services confiscated the timber, trucked in from Tete province, because it was above the thickness allowed by law.

This citizen video of timber trucks heading out of the forests of Mozambique, taken in July 2017, has become part of a petition to the government and the World Bank. The campaign also mapped 37 Chinese logging yards on a 45km stretch of the EN6 highway leading to Beira port

In early November last year the Mozambican Parliament unanimously passed a Bill banning the export of unprocessed timber logs, and the law came into effect on January 1 2017. The ban does not apply to semi-processed timber such as beams, planks and parquet, or finished goods such as furniture.

Celso Correia, Minister of Land, Environment and Rural Development, said in April that more than 120 timber yards had been inspected, many of them belonging to Chinese citizens, and illegal operations were found in 75% of them.

Correia said illegal timber operations were costing Mozambique between $150-million and $200-million a year. During the crackdown on illegal operators, fines had been imposed amounting to more than 157-million meticais (US$2,5-million).

During “operation trunk” timber exports were put on hold, but in order to minimise the losses of legitimate timber operators Correia authorised the exportation of certain loads with the right permits and taxes in place. 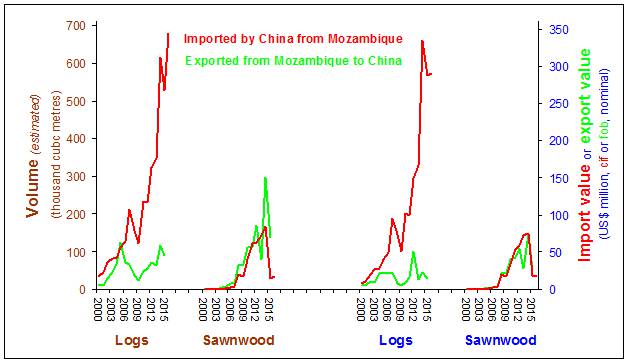 This graph, from a report by the Ministry of Land, Environment and Rural Development (Mitader), shows how timber imports logged by China between 2005 and 2015 differ vastly – to the tune of some $950-million – from corresponding export data documented by Mozambican customs and the Forestry and Wildlife Services

A year-long observation of the timber routes, following the flow of timber from the forests of Nampula and Chimoio to the northern and central harbours, indicated not all these exports were legitimate.

To investigate the process in the harbours from within, this reporter claimed to be a businessman anxious to move “mainly illegal” timber from Tete that was parked in a yard in Dondo district about 50km from Beira.

Harbour operators, customs officials and key shipping agents said the situation was “hot”, but not impossible. One shipping agent, “Elton”, renowned in Beira, offered to export the timber provided the “fee” paid to him covered the entire operation. It was conditional on whether the bribe could be shared with key associates involved in customs.

“You have to pay $150 per container so I can also pay my people,” he said. “You don’t have to be worried about agents, scanner controllers and customs officials. We work together.”

I asked to meet his associates in customs and the scan controller section. “You will meet them when you do the first payment,” he said, “and when you bring the containers to be shipped.”

This scenario played itself out with several other shipping agents. Some were more cautious. One agent, “Donald”, when presented with the same information, responded discreetly: “We can export it. We have our own way of solving it.”

A customs official in Beira went on to say the timber could be loaded into the shipping containers whatever its character.

Harbour employees and timber sellers in Beira said Chinese people were buying up large amounts of timber. “Money talks. You sell hot timber and even if it’s illegal, a negotiation is settled with customs officers,” said one harbour employee. 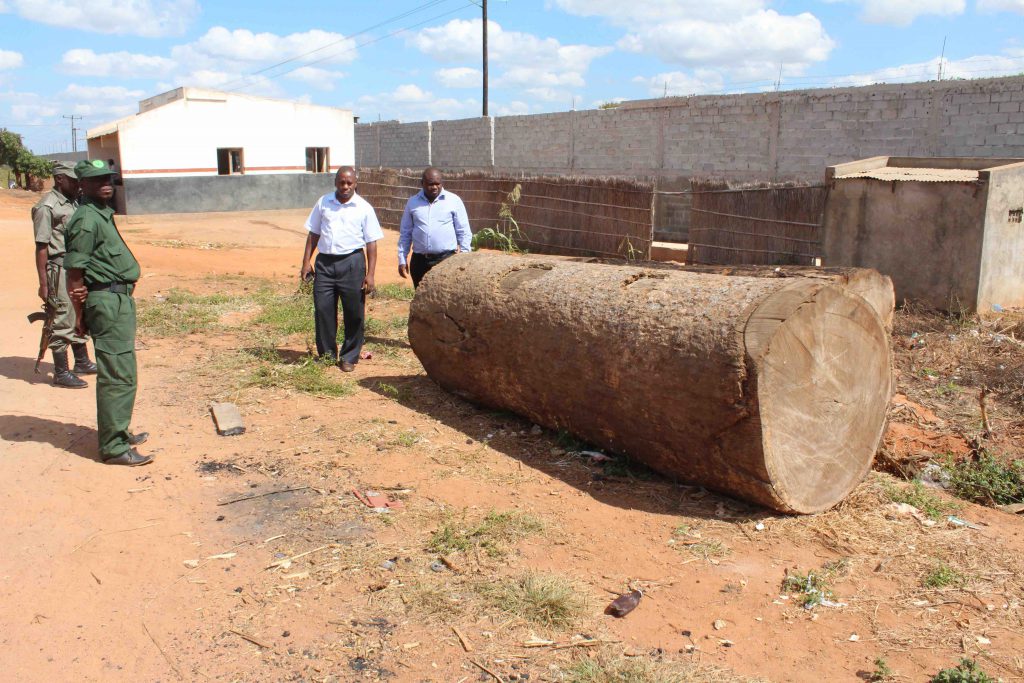 According to the provincial department of Mitader in Nampula, 28,895 cubic metres of timber were exported from the province in the first quarter of 2017 – 99% of it via the Nacala harbour to China.

It was at Nacala that a former minister of agriculture, Tomas Mandlate, and a company he partly owned attempted to export 1,020 containers of logs to China last December. At least 390 of the containers were found on the premises of the Nacala Special Export Terminal, a private company in which Mandlate is both a shareholder and board chairperson.

A Mitader team, led by its national director, Olivia Amosse, seized the timber and fined the company 15-million meticais [about $207,000). The remaining containers were found on the premises of three Chinese companies, Yzou, Zeng Long and Yang Shu.

Amosse told the independent weekly Savana that the timber, totalling 33,000 cubic metres of hardwoods, would have been illegally exported to China had it not been for the intervention of her team.

She said the situation she found in Nacala, “very strange” and showed “we are facing organised crime”. It was inconceivable that three separate enforcement bodies (the police, tax authority and the Environment Ministry) had not noticed what was going on, she said.

Other illegal timber consignments seized at Nacala have been disguised. Last October, for instance, 16 containers of hardwood declared as cotton fibre and destined for China were seized by a joint force of forestry and customs officials. The timber allegedly belonged to a Malawi-based Chinese syndicate.

Three containers of rare ironwood declared as cashew nuts and destined for China were seized at Nacala in May. The shipment belonged to a Chinese company called ABC and the timber, masked by false documentation, had been logged during the closed season.

The attorney general detained two harbour officials on charges of money laundering and illegal timber smuggling. Three of ABC’s 18 members were detained for money laundering while others still on running from the Mozambican authorities.

An official at Mitader’s department in Nampula said timber was frequently exported under other categories such as cashew nuts by using more than one permit.

“The containers are registered with two export permits, one for cashew nuts and the other for timber. While the first permit is used to get access to the Mozambican harbour for exporting, the second one is used for its final destination – China – where the real product inside the container, timber, is declared.” – oxpeckers.org

Estacio Valoi is a Mozambican investigative journalist. This investigation was produced by Oxpeckers Investigative Environmental Journalism, supported by the Organised Crime and Corruption Reporting Project (OCCRP) and co-funded by the World Wide Fund for Nature (WWF) in Mozambique.