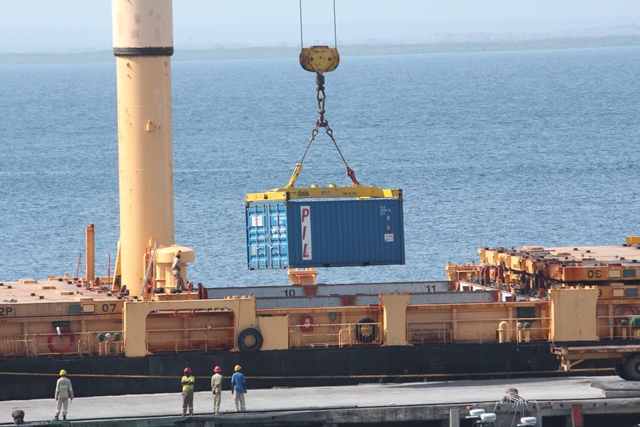 Despite a ban on the export of raw timber in Mozambique, containers filled with hardwood logs are piling up in northern harbours for export to China. Estacio Valoi investigates 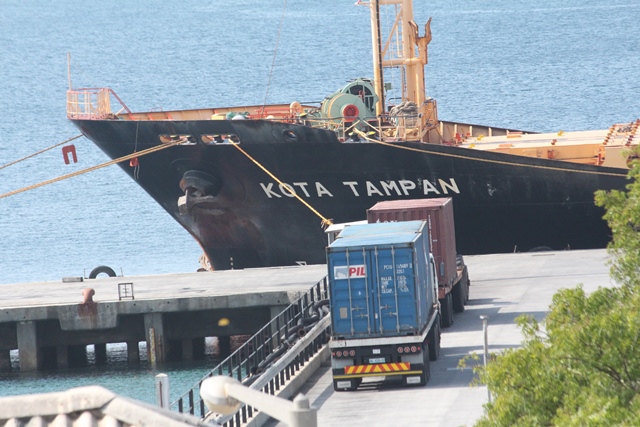 While Mozambicans were celebrating the festive season, the controversial Mofid timber company and its associates were stockpiling containers loaded with illegal timber and other suspected illicit products such as ivory in Pemba harbour.

Kato Tampan 9281346, a container ship flying the Singaporean flag, is docked in the harbour in the far north of the country. Over the past week it has been trying to load 30 containers filled with looted timber from the Chinese company Mofid (Mozambique First International Development, Lda) and its associate, Peng Pai Forest Company.

It appears that at least four of the containers were loaded on to Kato Tampan and the remainder will be loaded on to Bomar Rissen, a ship flying the Marshall Islands flag which arrived in the harbour on Sunday, January 8.

The Mozambican government announced a ban on the export of raw timber logs in November 2015, and suspended the logging of certain species such as ironwood trees used in charcoal production.

In early November last year Parliament unanimously passed a Bill banning the export of unprocessed timber logs, and the law came into effect on New Year’s day 2017. The ban does not apply to semi-processed timber such as beams, planks and parquet, or finished goods such as furniture.

Shortly after the law was passed, authorities announced the seizure of 1,300 containers of logs at another northern port, Nacala, in early December. It was the largest haul of illegal timber confiscated in Mozambique, and was believed to be headed for China.

The logs now waiting to be exported from Pemba harbour were dispatched by local shipping agent Gardino J Txopela, and the containers are under the name of Yu Gaing. 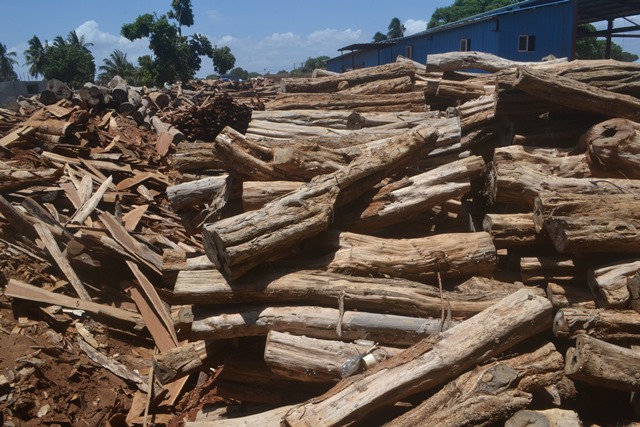 Logs piled high in the Mofid-Pen Pai yard, ready to be loaded into containers

Mofid was implicated in illegal logging in 2013 and its timber exploration licence was cancelled by the Cabo Delgado Agriculture Department, but the company has continued operating via associated companies such as Henderson International, Jian International and Kam Wam.

Vicky Lau is the general manager of Mofid and its subsidiary companies, Pemba Construction and Hui Yuan Fishery. An employee who did not want to be named said she is buying up all the illegal timber seized by the agriculture and environment department agents at the Pemba check points.

“The timber is not taken to the agriculture department this year but to Vicky Lau at Mofid, and the payment is in cash. Inside they have a kind of bank: money in different currencies, from meticais to US dollars, but only for Chinese people,” said the employee.

Mofid has been linked by sources in the Quirimbas National Park to leaders of the ruling Frelimo party and to government ministers involved in the timber looting. The Environmental International Agency tracked the involvement of the Agriculture Minister Jose Pacheco and the former minister, Tomas Mondlate, in looting timber from Mozambique to China on behalf of Mofid. Mondale’s agency was also allegedly involved in the logs recently seized in Nacala harbor.

The provincial services of Forestry and Wildlife of Cabo Delgado and of Land, Environment and Rural Development are the main agencies providing technical evaluation of management plans, issuing licences and permits for hunting, enforcing forestry concession laws, and overseeing forest operations like the movement of forest products, including the entry into the port of produce for export.

“A total ban on timber log exports means customs inspectors no longer have to determine what kind of wood is being exported, given that according to the current law the most valuable species have to be processed in the country,” said Correia.

“Estimates indicate that Mozambique has been losing 220,000 hectares of forest per year, from tree felling as well as forest fires related to slash and burn agriculture.”

At the Agriculture Department the revenues fall into the hands of a corrupt network of functionaries at both state level and various networks in the districts and communities. They accept illegal payments to help operators and traders like Mofid bypass the regulations. 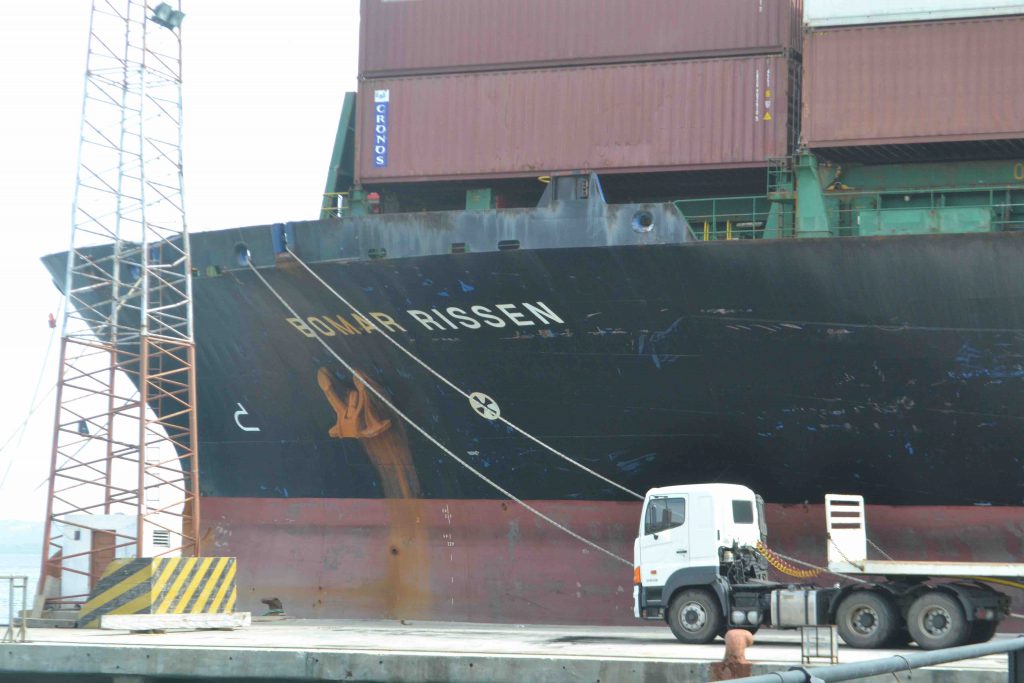 Bomar Rissen, a ship flying the Marshall Islands flag, arrived in the harbour on Sunday, 8 January 2017

Over the past weekend Mofid was trying to get its cargo inside Pemba harbour to be exported. Due a lack of permits and documents to export the containers, “they paid the customs service agents and their collaborators” and the cargo was downloaded, according to some of the drivers transporting the containers.

“We have been here since morning waiting for the Mofid owners to come and pay money to these people from the customs service to allow us to offload the containers and be shipped to China. The logs have no documents, no permits to be exported and that is why we are waiting for the money to pay them. The only documents in our possession are for these trucks,” said drivers.

The drivers also believed that other products such as ivory might be part of the cargo ready to be shipped exported abroad.

“Everything in those containers is illegal. People from Mofid are struggling to prevent the customs service from opening the containers. On January 5 another cargo was expected, of containers to be delivered to Pemba harbour. The Chinese woman has solved everything,” said one driver.

Requests for permission to see what was inside the containers were rejected by the Pemba chief customs agent, Nazilo Valabdas. He said opening the containers in the loading area would only be done if there was something “highly suspicious” and would require the presence of various parties, including the customer, agriculture service, state intelligence agents, the shipping agent and the owner of the containers.

The customs services records reflect that last year some 3,000 containers of six metres each carrying logs and processed timber were exported to China from Pemba. There were 220 declarations representing an incoming of US$1,267-million (90-million meticais) for the government. – oxpeckers.org

• Sources say the containers will disembark at the Chinese port of Zhanjiang. Situated in south west China, the port is currently the most vulnerable to corruption after the Chinese government strengthened security at other ports. The products inside the containers will be transported by truck to Shanghai and other parts in China, the sources say.

• Questions emailed to Vicky Lau and Mofid-Peng Pai about the allegations in this article remain unanswered.