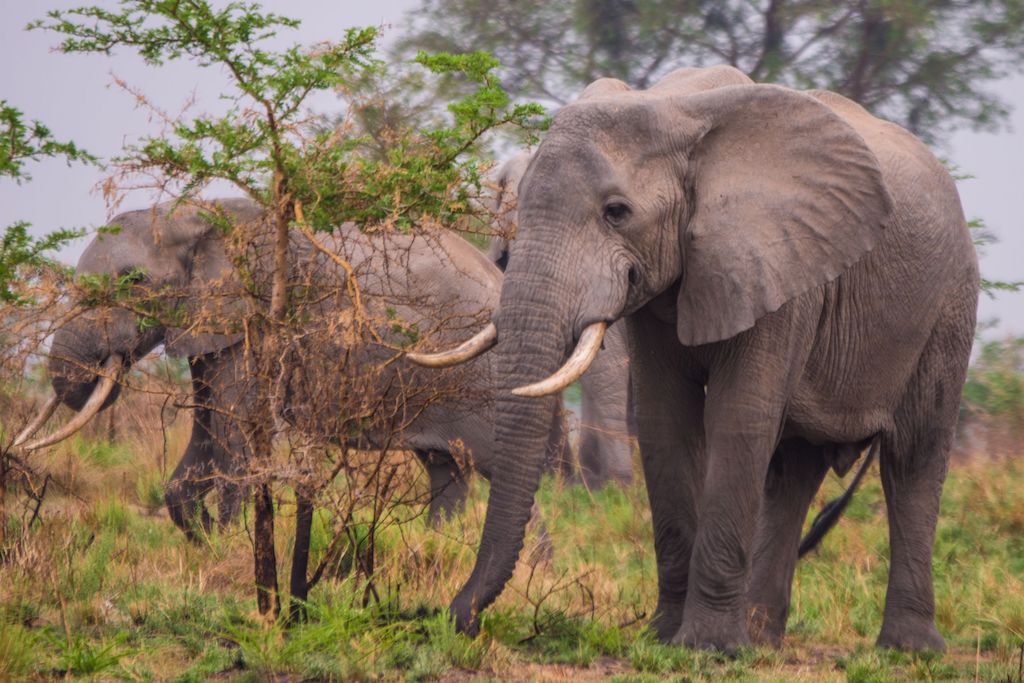 Posted on 8 Jul, 2022 by Oxpeckers Reporters

Handling of wildlife crimes in Uganda has improved since the establishment in 2017 of a special court to handle related cases, reports Cliff Abenaitwe

Elephants in Uganda’s National Parks are a major target for poachers because of demand for ivory. Photo: Cliff Abenaitwe

A special court established in Uganda, called the Standards, Utilities and Wildlife Court, was “critical to the country’s economic development”, then Chief Justice Bart Katureebe noted at its launch in 2017.

“Access to justice in this area has the capacity to promote investment in critical areas of the economy, protection of the environment, public health and ethical trade practices,” he said.

Between July 2020 and June 2021, the court handled 468 wildlife crime cases. According to information from the legal and corporate affairs department at the Uganda Wildlife Authority (UWA), 230 cases were concluded with 207 convictions, 20 dismissals, one acquittal, and two suspects were released on police bond (bail). However, 238 cases remained pending, with 179 due for further hearing.

One of the most high-profile cases handled by the court between July 2020 and June 2021 involved You Jing Dao and six others. They were arrested with 10 pieces of elephant penises, one kilogram of pangolin scales and six live tortoises. They were fined more than 15-million shillings (about USD4,000), including an order to pay UWA a fine of USD1,500.

Uganda is one of the common transit points for the trafficking of wildlife and wildlife products in the Central and East Africa region, according to the 2018 Uganda Wildlife Trafficking Assessment report produced by global monitoring group TRAFFIC. Criminal organisations are mainly associated with the smuggling of ivory, but in recent years have also been linked to pangolin trafficking.

According to this report, with the recent increase in wildlife crime, more than half of the world’s remaining mountain gorillas, 50% of Africa’s bird species, almost 40% of Africa’s mammal species and 19% of amphibian species in Uganda are at risk.

“Wildlife crime remains a significant obstacle to conservation in Uganda,” said Hangi Bashir, spokesperson for UWA, the government agency with jurisdiction over all national parks and game reserves in the country.

During the Covid-19 lockdown of 2020/21, UWA registered an increase in poaching. The worst scenario happened when six lions were killed in Queen Elizabeth National Park in 2020.

Hangi explains that this trend was due to the hard economic situation many people experienced at the time. “The lucrative wild meat market, as well as the booming international market for items like ivory, animal skins, elephant penises and pangolin scales, is fuelling poaching,” he added.

Hangi attributes the rising number of arrests and convictions to the country’s increased efforts to combat wildlife crime.

Conservation and security authorities have increased inter-agency collaboration and the country now has a Joint Wildlife Coordination Taskforce, he said. This task force comprises agencies like UWA, customs officials, Uganda police, the Uganda People’s Defence Forces and the Financial Intelligence Authority, among other organs. It aims at strengthening coordination among different agencies to combat wildlife crime.

“We know that wildlife crimes occur in a syndicated manner, and when items are got, they have to be transported internally and across the borders,” Hangi said. “Through working together the taskforce has achieved much, but it is also looking forward to achieve much more in the fight against wildlife crimes especially wildlife trafficking.” 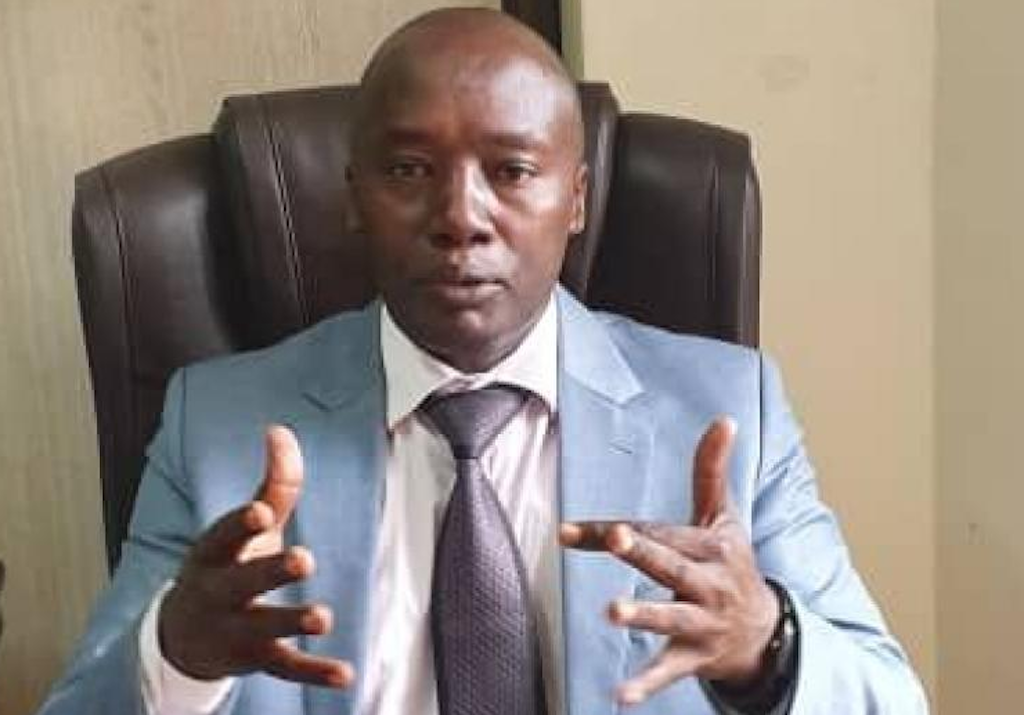 Uganda Wildlife Authority spokesperson Bashir Hangi: ‘Poachers are becoming cleverer and sometimes sophisticated in operation, but as UWA we are always ahead and smarter.’ Photo supplied

The Oxpeckers #WildEye East Africa digital tool, which tracks data on court cases involving environmental crime in the region, lists more than 100 cases in Uganda. Analysis shows that 48 wildlife crime cases were recorded from the western part of Uganda, five in the south-western part, 12 cases in central Uganda, nine in northern Uganda and six in the north and eastern Uganda regions in recent years. This data is still being updated, but it provides an overview of the extent of wildlife crime in Uganda.

All these efforts are geared towards protecting Uganda’s wildlife, which is a cornerstone of the tourism sector – the largest foreign exchange earner for the country.

“It’s true the poachers are becoming cleverer and sometimes sophisticated in operation, but as UWA we are always ahead and smarter,” Hangi said. The organisation has increased the capacity and the number of rangers in national parks, and intensified patrols in all conservation areas to safeguard wildlife and deter crimes like poaching.

“We now have a fully-fledged intelligence, investigation, evidence gathering and prosecution unit to deal with wildlife crimes. Our target is to reduce wildlife crimes especially poaching but also stop our country from being a transit route for wildlife traffickers,” he said.

Over the years Uganda has boosted its canine unit at key international transit routes, mainly at Entebbe International Airport, to intercept illegal wildlife products. These units have been expanded to other areas as well, with one at Karuma, located in the north-western part of the country, on the Kampala-South Sudan highway, and in the wider Murchison Falls National Park.

In 2020 the UWA deputy director of field operations, Charles Tumwesigye, was quoted by Africa Wildlife Fund saying: “The north-western region harbours trafficking routes for wildlife contraband smuggled across the DRC border and increasingly from South Sudan with the converging point being Karuma.” However, authorities at UWA believe that this canine unit is effective at detecting such illegal activity in this trafficking zone. 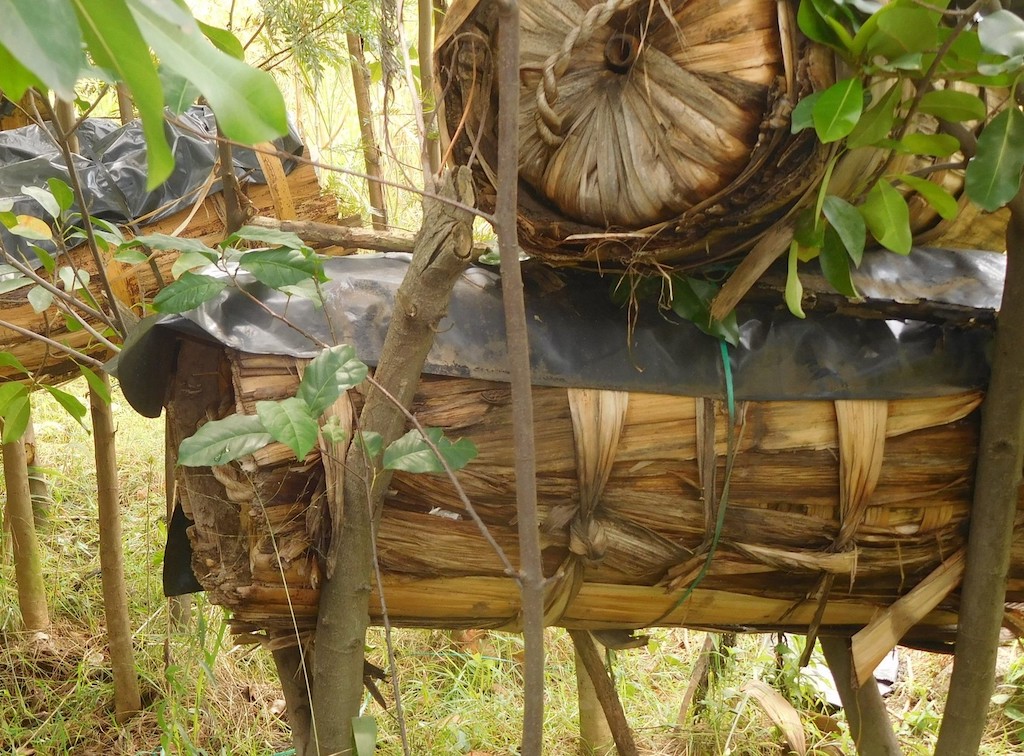 Traditionally made beehives that many farmers in Rubirizi district neighbouring Queen Elizabeth National Park use for alternative livelihood and income. Photo: Cliff Abenaitwe

UWA has also adopted community-based approaches to promote conservation. These approaches are aimed at raising awareness of the importance of conservation among people living in areas neighbouring national parks, according to Hangi.

He explains that communities are being supported to carry out income-generating, conservation-friendly projects like apiaries along the boundaries of conservation areas. Some of these projects are in areas like Muhoma (Bwindi Impenetrable forest), Kanyaryeru (near Lake Mburo National park), Bweyare and Karuma (along Murchison Falls National Park).

Apart from the income-generating projects, communities neighbouring national parks also benefit from revenue sharing. Established by the government in 1995, the revenue-sharing programme aims to balance the disadvantages people encounter living next to protected areas while fostering improved conservation behaviours.

Under this arrangement, UWA shares 20% of the protected area entrance fees with local governments to benefit communities living adjacent to national parks. For communities neighbouring Bwindi Impenetrable Forest National Park, this revenue is supplemented by USD5 from every gorilla tracking permit.

“We have managed to construct water dams for communities in Biharwe division which neighbours the Lake Mburo National Park using revenue-sharing resources. This has eased water scarcity and farmers no longer frequent the national park for water,” said Robert Kakyebezi, the mayor of Mbarara City in south-western Uganda.

Apollo Mwesigye, the community development officer for Katunguru sub-county in Rubirizi district, one of the districts adjacent to Queen Elizabeth National Park, says continuous community sensitisation and utilisation of funds received under the revenue-sharing scheme has helped people appreciate the value of wildlife conservation.

“We now look at wildlife as a treasure we must all protect because of the tangible benefits we are enjoying,” said Tweteise Mwinemugisha, the chairperson of Kyambura village in Rubirizi district.

Support for  development and production of this story came from InfoNile, in partnership with Oxpeckers Investigative Environmental Journalism, with funding from the Earth Journalism Network. Data visualization by Ruth Mwizeere and Annika McGinnis / InfoNile.