Clipping the wings of crane poachers in Rwanda 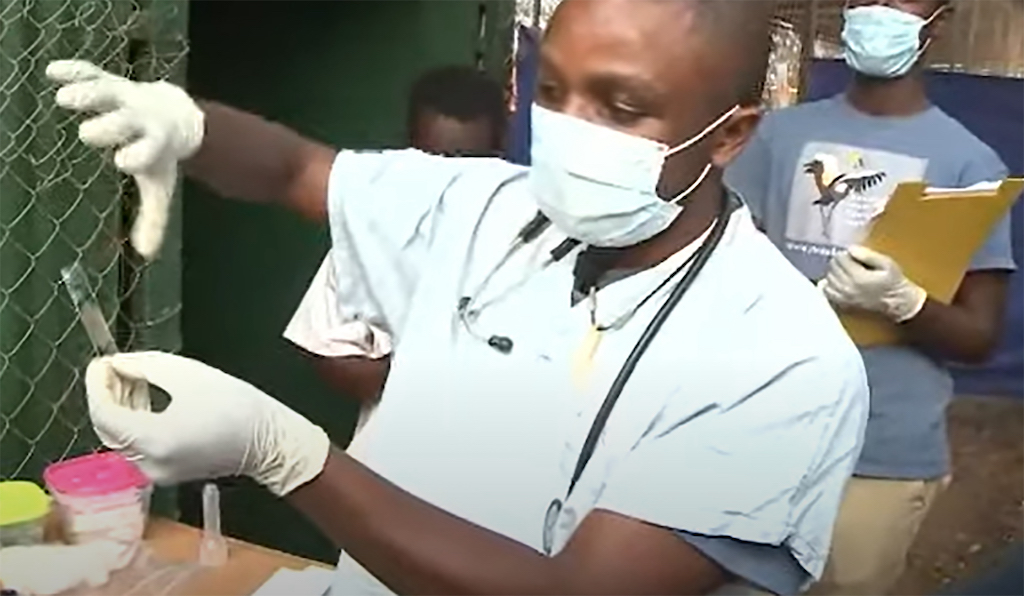 31 May Clipping the wings of crane poachers in Rwanda

Moves to stop the domestication and illegal trade of grey crowned cranes have seen the population of these endangered birds grow by more than 105%, reports Aimable Twahirwa 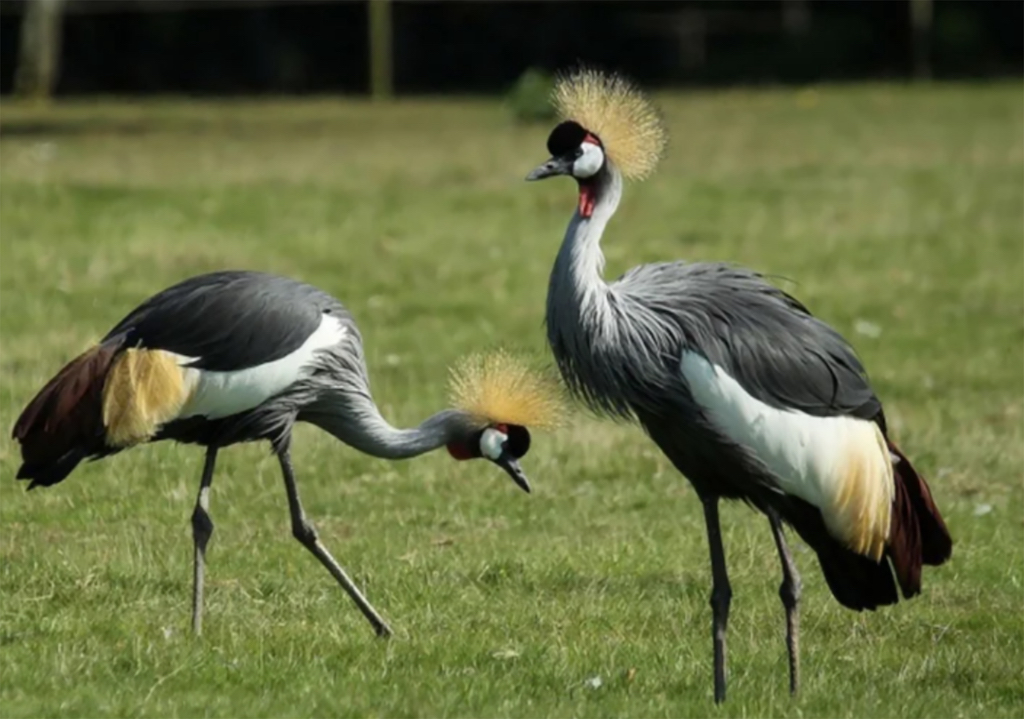 The only species of crane found in Rwanda, grey crowned cranes are threatened by several human factors, including habitat loss and poaching of adults, chicks and eggs. Photo © Aimable Twahirwa

Jane Nayituriki, a farmer from Burera district in northern Rwanda, used to wake up early every morning to catch the migratory grey crowned cranes flying along the neighbouring Rugezi wetland in order to raise their chicks as domestic pets.

Nayituriki, a mother of four, was a member of a group of poachers who used to set up their camps in different parts of marshland zones in Rwanda to catch the grey crowned cranes flying around her village.

“In the past, people here were engaged in unsustainable practices of poaching cranes, but thanks to the latest conservation efforts, most of the villagers have now stopped hunting,” she said in an interview.

These illegal activities by local villagers were conducted before an initiative to address this threat to the endangered cranes was developed. Nayituriki is now among a group of crane poachers who recently refrained from trapping the birds and found other means of earning a living.

Along with farming, Nayituriki now benefits financially from activities such as the regular crane census, when conservation groups hire local communities to help count the birds. The Rugezi wetland is a protected area and one of headwaters of the Nile River where thousands of grey crowned cranes congregate.

The adult crane has grey plumage and white wings tipped with a range of colours and a distinctive black patch. The bird’s head has a crown of stiff golden feathers, which many consider as a symbol of wealth in Rwanda.

Official records in Rwanda show that the grey crowned crane is hunted for meat and alleged medicinal value, and some people use the birds as pets in their households and hotels. They are also sold to international illegal wildlife dealers.

The species is listed on the International Union for Conservation of Nature (IUCN) Red List as an endangered species and occurs beyond Rwandan borders in the Democratic Republic of the Congo, Uganda and Kenya south through Tanzania and Burundi to Mozambique.

Illegal domestication of these endangered birds for both commercial purposes and consumption has gained ground in recent years.

In response, the Rwanda Wildlife Conservation Association has made a concerted effort since 2015 to address the threats: confiscating all cranes being kept illegally in domestication, returning those that are in good health to the wild in the Akagera National Park, and working towards establishing a good captive facility for those that cannot be released – serving ultimately as an education centre for crane conservation.

Several hundred grey crowned cranes that fell victim to poaching and wildlife trade in the past few years are now safe in a newly established facility known as Umusambi Village (Cranes Village) located in Nyandungu, a suburb of the Rwandan capital Kigali.

During the rescue operation, conservationists retrieved many cranes that were disabled and injured as a result of living in captivity. Umusambi Village currently provides sanctuary to about 70 of these birds, which can no longer fly.

The 21ha2 facility is the first of its kind in the country after the Rwandan Cabinet approved in September 2020 a draft law giving the green light to private companies or associations seeking to venture into wildlife conservation for commercial purposes.

Before the new law, associations like the Rwanda Wildlife Conservation Association (RWCA) were only authorised to release cranes from captivity into the wild, but the new measures allow the association to run facilities like Umusambi Village privately.

Some of the people who used to capture cranes are now employed in the sanctuary, which is also generating revenue from tourists who come to see the cranes.

“Thanks to these efforts, local communities living around the site are benefiting from ecotourism opportunities in their area,” said Olivier Nsengimana, a Rwandan veterinarian who designed the project aimed at saving the country’s endangered grey crowned crane.

Nsengimana is the executive director of RWCA, a local non-government organisation seeking to abolish the illegal trade of the grey crowned crane in Rwanda.

The only species of crane found in Rwanda, the grey crowned crane is threatened by several human factors, including habitat loss and poaching of adults, chicks and eggs.

Legislation approved by the government in 2020 prohibits the domestication and illegal trade of wild grey crowned cranes, but the practices are still common in both rural areas and urban settings.

These threats, according to experts, are often driven by poverty, livelihood disadvantage and lack of conservation awareness, as well as people and animals competing for the same habitat.

Increased pressure on land, mainly for agriculture and human settlement, has made it difficult to conserve grey crowned cranes effectively, according to Nsengimana and Ruhagazi of RWCA.

This is because land pressures affect the birds’ breeding cycle as their main habitat is wetlands and marshlands, said Telesphore Ngoga, head of the conservation division at the government’s Rwanda Development Board.

While Rwanda is home to an incredible variety of biodiversity, the country is challenged by high population density and poverty. With a population of more than 12.6-million people living on 26,338km2, land and resources are often overstretched due to high competition between people and wildlife.

Back to the wild

Despite the challenges, conservation experts say the threats against grey crowned cranes have greatly reduced in Rwanda due to the recent initiatives.

According to Nsengimana, the number of grey crowned cranes in Rwanda has reached impressive levels, driven by measures such as providing support and engaging communities in initiatives to reduce poaching.

Some wetland zones in Akagera National Park, located about 100km from Kigali, have become a vital transfer station for formerly domesticated birds. Of the 319 cranes that have been removed from captivity, 242 have been reintroduced to the wild in the national park.

Deo Ruhagazi, crane project programme manager and field veterinarian at RWCA, said that while selling rare birds was a major economic activity for rural households, “community awareness has been important to those engaged in poaching, selling and keeping cranes at home”.

One of the successful measures is the development of bird-themed tourism, including an awareness campaign focusing on the environmental consequences to those reluctant to hand back any crane they might have.

“Local residents have transformed from poachers to bird protectors as they have realised that protecting cranes is protecting themselves,” said Ruhagazi.

Since 2014 the RWCA, in collaboration with the International Crane Foundation’s conservation medicine department, has undertaken public awareness campaigns and helped to officially register 319 cranes held in captivity to supplement a remnant population in eastern Rwanda.

Support for development and production of this story came from InfoNile, in partnership with Oxpeckers Investigative Environmental Journalism, with funding from the Earth Journalism Network. Data visualizations by Annika McGinnis / InfoNile. This investigation was published by the Rwanda Dispatch here, and by InfoNile in English here and in French here.