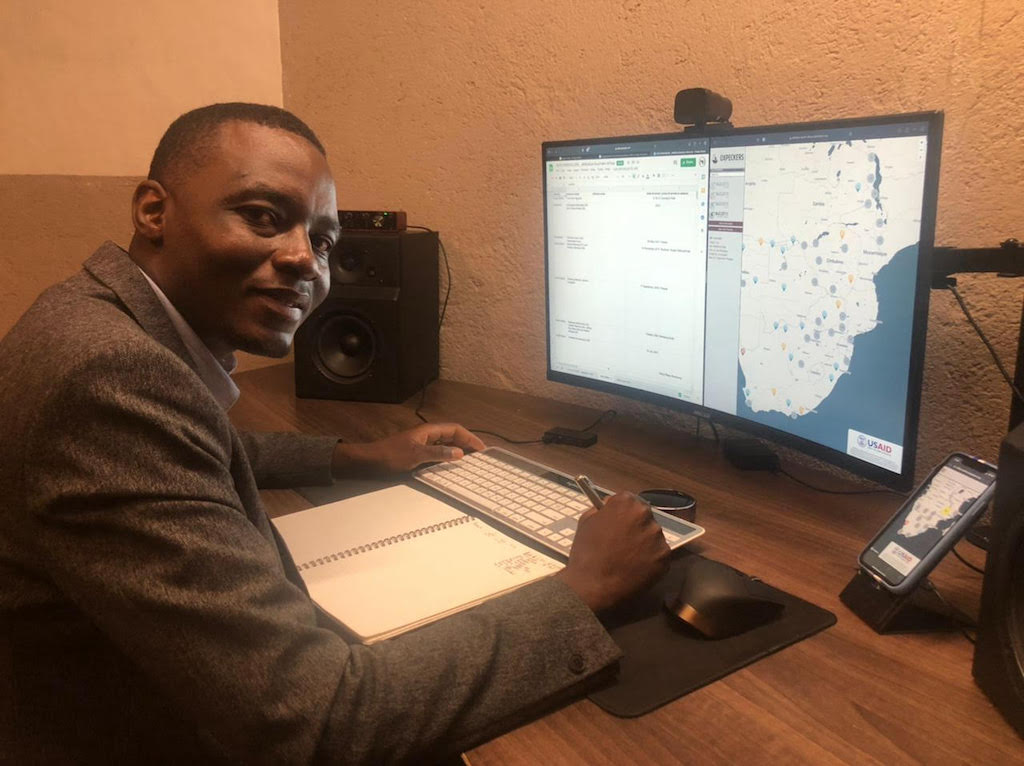 Through analysis of the data he gathered and contributed to the #WildEye tool, Zimbabwean data journalist Sean Ndlovu was able to identify wildlife crime hotspots in his country

In a boost for environmental crime reporting in Southern Africa, journalists who completed the inaugural six-month Oxpeckers course on using data to report on wildlife crime have committed to using their freshly honed skills to keep pushing for access to information in their respective countries, while reporting on wildlife crime across borders.

As part of the Oxpeckers Professional Support and Training Project, the course aimed to improve the ability of journalists to tell data-driven stories. The curriculum’s practical tasks, including using access to information laws and gathering data sets, assisted participants to navigate the complex information and legal landscapes in five Southern African countries.

Supported by experienced mentors and legal experts, participants gained the knowledge and skills to source and work with hard-to-access wildlife crime-related data.

“As course alumni, we aim to keep pushing forward on accessing information and cultivating relationships with officials and those with information,” said Nompumelelo Mtsweni, the participant from South Africa. “We’ll follow up and keep adding data to the database and encourage other journalists to use the tool while collaborating with other data wranglers and growing our community.”

Mtsweni is collecting and collating data released to her by the National Prosecuting Authority for use on the #WildEye Southern Africa digital tracking tool, which follows court cases and convictions related to wildlife crime in the region.

“As a practice, data journalism is different to investigative journalism, and the training reflected that,” said Oxpeckers learning specialist Derick du Toit, adding that credible, accessible data on incidents of poaching, seizures, arrests and court cases is used to identify trends, patterns and gaps that journalists analyse to report on wildlife crime. 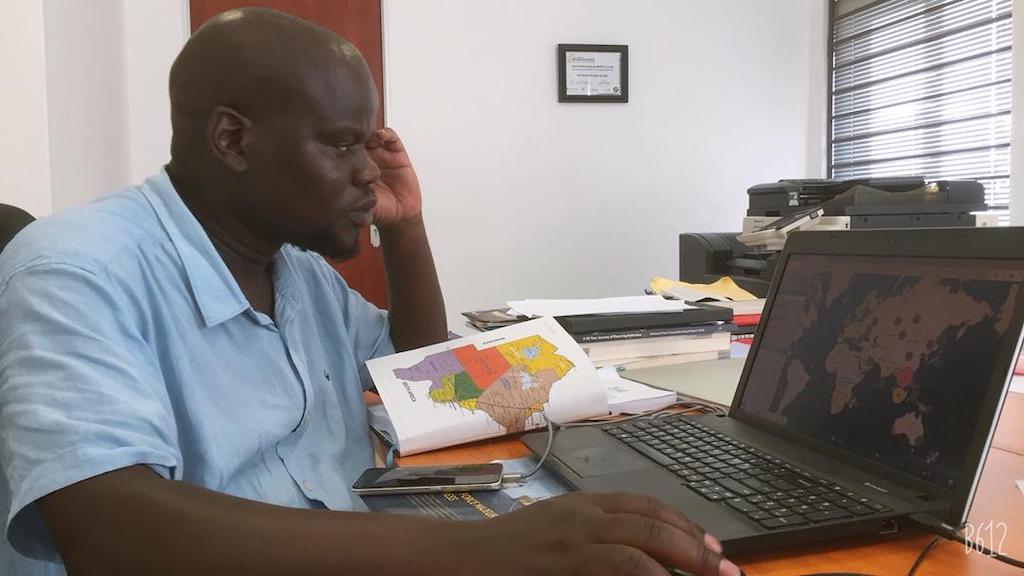 Calistus Bosaletswe, course participant from Botswana, discovered that getting data on wildlife crime from officials in his country is no easy task

In completing their tasks, all course participants faced varying levels of intimidation and bureaucracy but were ultimately able to contribute data to the #WildEye Southern Africa tool.

Developed by Oxpeckers with a grant from USAID/Southern Africa, the tool gives journalists access to geo-tagged and evolving data on wildlife crimes in Southern African countries. Launched in November 2021, anyone can use and access it to track wildlife and other environmental crimes in the region.

“While it’s focused on Southern Africa, its impact is global,” said Oxpeckers associate Andiswa Matikinca, and the more information added to the database, the more powerful it becomes.

Getting data, however, is no easy task. “Persistence is crucial; journalists have to keep pushing for access to information by using the law, cultivate relationships with officials who may not cooperate, and understand the processes involved in getting information from courts and other sources,” said Oxpeckers co-founder Fiona Macleod, who shared her own experience of using data to drive ground-breaking environmental journalism during the course.

Seasoned Malawian journalist and course participant Mbauwo Chavula was shocked by the lack of responsiveness among officials tasked with sharing information on wildlife crime in her country, but learned that “if you really want data, you’ll get it”.

Through analysis of the data he gathered and contributed to the #WildEye tool, Zimbabwean data journalist Sean Ndlovu was able to identify wildlife crime hotspots in Zimbabwe.

“There is still a lot of work to be done in the region. My hope with #WildEye Southern Africa is that other journalists, researchers, NGOs and officials join us in this fight to make wildlife crime data easily available and publicly accessible by all,” he said. 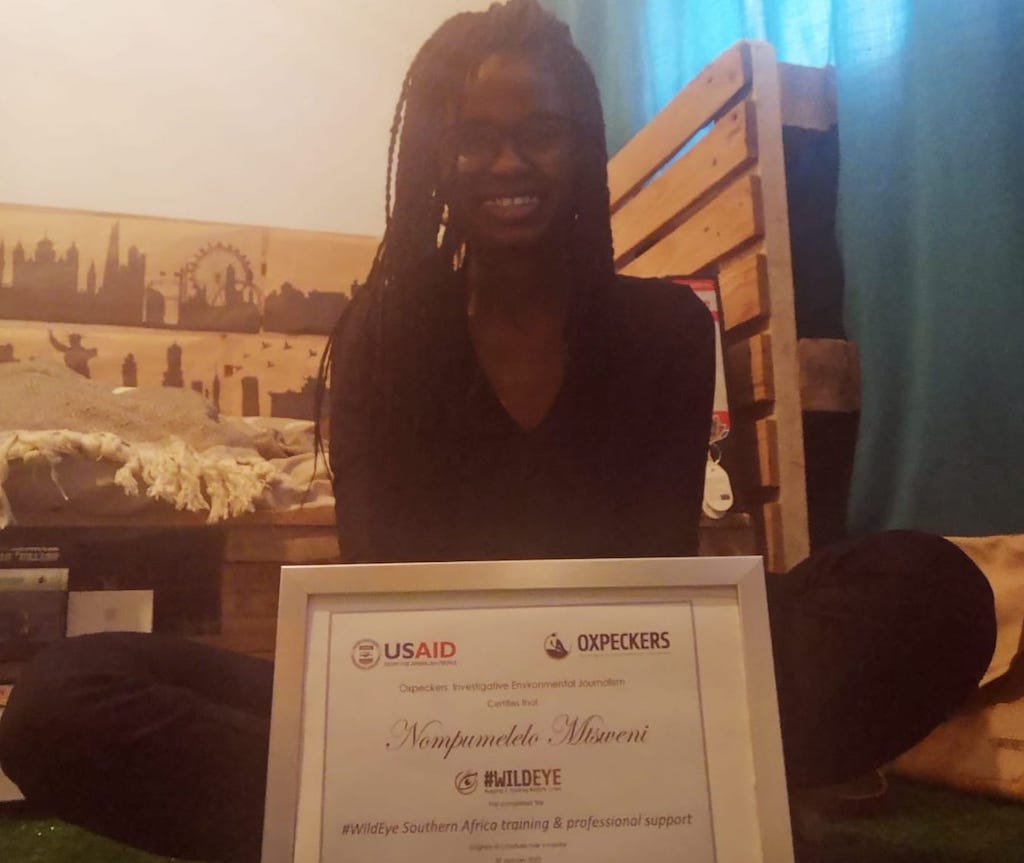 Nompumelelo Mtsweni, course alumni from South Africa, continues collecting and collating data released to her by the National Prosecuting Authority

Each participant gained a certificate of completion to recognise the time and effort they put into developing the knowledge and skills associated with data journalism. “We congratulate them on a very fine effort and having done some arduous and difficult tasks to get this far,” said Du Toit.

Resources and learning materials from this project have been shared online to advance data journalism and environmental reporting around the globe. These include videos, articles and documents featuring tips and tools, documenting first-hand experiences from data journalists and the legal processes involved in combating environmental crimes, and describing how the #WildEye tools can be used. (See the Oxpeckers Learning Kit.)

The work Oxpeckers has undertaken with USAID/Southern Africa’s support will strengthen the capacity of journalists to investigate and report on wildlife crime, supported by the open-source digital resource #WildEye Southern Africa. It is part of USAID’s VukaNow Activity, a region-wide programme to significantly reduce the level of poaching and illegal trade in wildlife and enhance law enforcement capacity and promote sustainable utilisation of natural resources.