Pakistan poachers lure ‘ambassadors of peace’ out the sky 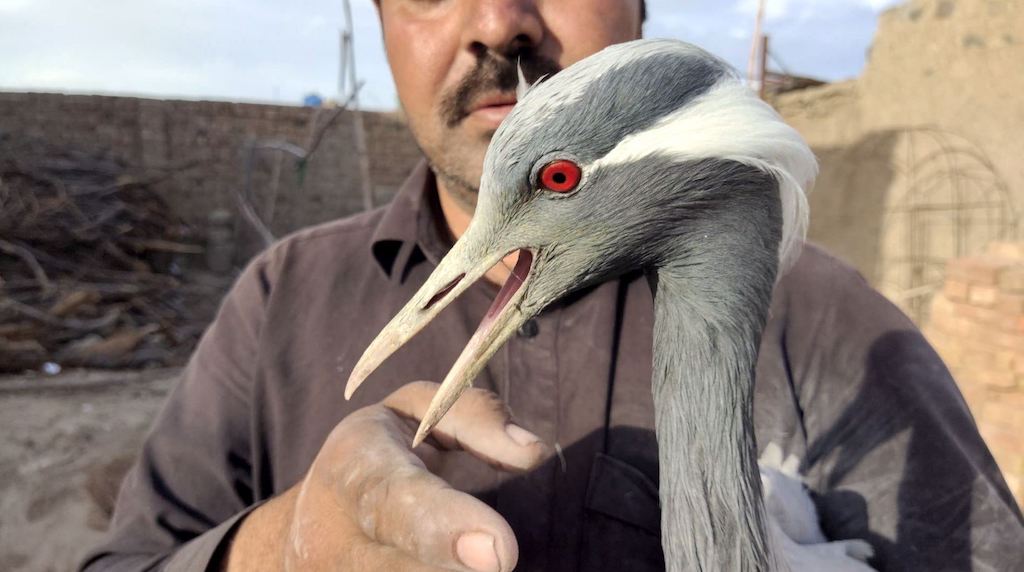 18 Jan Pakistan poachers lure ‘ambassadors of peace’ out the sky 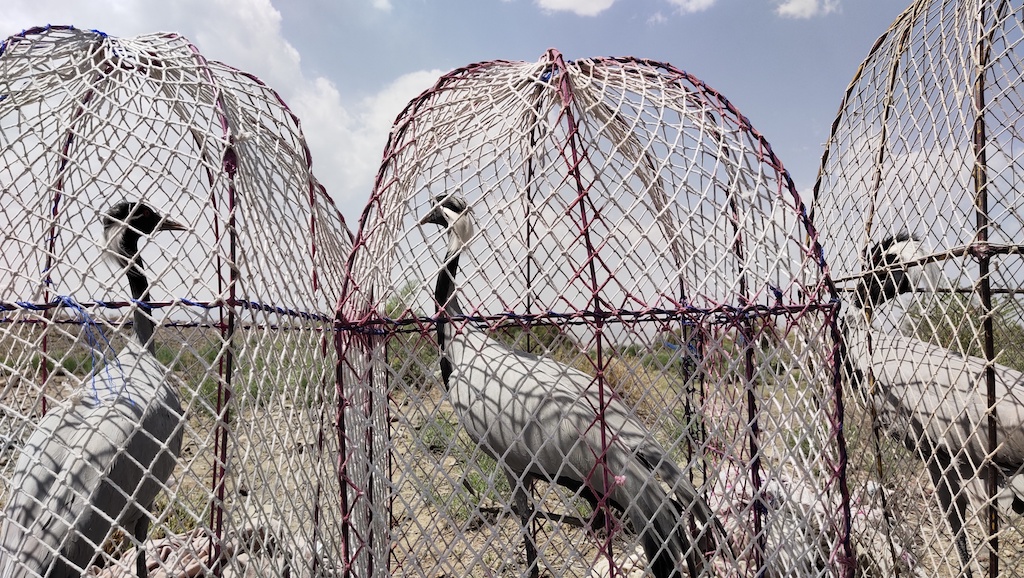 For many cranes passing over the Zhob valley, the treacherous migration journey ends up with them being trapped, having their wings cut off and confined to a cage. Photo: Rafiullah Mandokhail

Long-necked cranes are not only famous for their heart-touching voice and beautiful wings but are also considered to be the symbol of beauty, an omen of a happy life and good fortune. The tall flying birds are also a poetic metaphor in classical literature, known as the “ambassador of peace”.

Twice a year, in the Zhob valley of Balochistan in Pakistan — which shares borders with neighbouring Afghanistan and the tribal region South Waziristan — the migration of the cranes heralds the arrival of spring.

Thousands of cranes congregate near the Zhob River, which flows from the north of the city into the Gomal River. The riverbank is an important stopover on the cranes’ long migration route from Siberia’s icy forests. It is a spectacular nature show, but with each passing season the cranes are increasingly endangered by illegal hunting and trapping.

Tahir Rashid, director of WWF Balochistan-Sindh, said the migration of four crane species to these wetlands is centuries-old, but with each passing season the flocks are reduced in numbers and strength.

Official data shows that the cranes fly more than 6,000km from Siberia to India. Their perilous journey starts in September-October when cold weather compels the birds to find moderate temperatures.

Knowing no boundaries, the flocks travel across rivers, mountains and deserts to reach their destination. They fly via Kazakhstan, Tajikistan, Iran, Afghanistan, Hidu Kush and Karakoram, including some parts of Balochistan, to the hotspot of Bhatapur Rajasthan in India, via the Indus and Punjab watersheds.

According to the International Union for Conservation of Nature (IUCN-Balochistan), vanishing forests and drying up of lakes are the some of the causes behind the rapid decline of cranes, but it is the ruthless trapping, killing and poaching by humans that has brought the population of cranes close to the verge of extinction.

Muhammad Akber, who has been associated with the hunting of cranes for the past 10 years in the Zhob area, said that when winter is over the cranes fly back to their native habitats and nesting grounds in March-April.

They stop over at lakes, river banks and water basins in many parts of Pakistan, including the mountainous area of Zhob and bordering districts. The birds can fly about 200km a day during the migration period, he explained.

“The crane lives and breeds near water basins. It emits a honking sound when flying. The bird can live for 20 to 30 years. A guide crane who is familiar with the migratory route leads the flock with a loud honking sound,” he added.

“After the cranes are trapped, the poachers cut their wings off and confine them to cages. In many cases they are forcefully crammed into very small boxes which sometimes paralyse their legs,” Akber said. “The captured cranes are then transported to the bird markets for selling purposes, where people belonging to well-off families buy them to keep as pets.”

As soon as the migration season approaches, a large number of hunting parties set up their camps along the Zhob River. Although the district administration in Zhob imposes regulations that ban hunting of the cranes, influential parties – mostly from Lakki Marwat, Bannu and other parts of Khyber Pakhtoonkhwa province – backed by some locals, make the official restrictions and obstacles meaningless.

Hussain Alam, who has 23 cranes at home and lives on the river bank in Zhob, explained that the eyes of cranes are very delicate and they are easily affected by the light. When they hear the calls of the migrating cranes in the air, the caged cranes in his courtyard also call and try to fly with their severed wings. 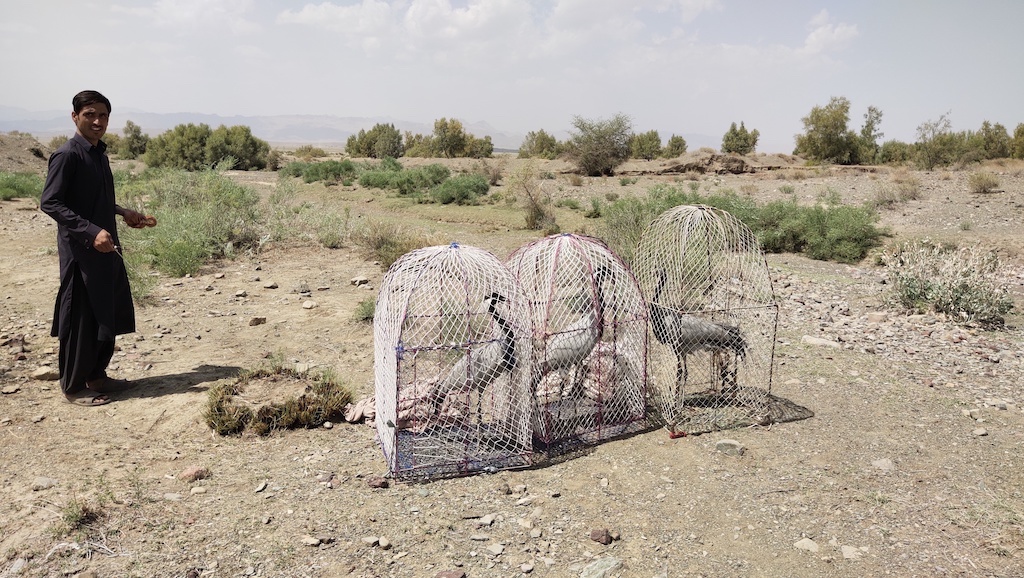 Hussain Alam keeps 23 cranes at his home on the river bank in Zhob. When the caged birds hear the calls of migrating cranes in the air, they call back and try to fly with their severed wings. Photo: Rafiullah Mandokhail

According to the International Crane Foundation (ICF), 11 of the world’s 15 species of cranes face extinction.

In March 2018 the United Nations Office on Drugs and Crime and WWF-Pakistan signed an agreement to work together to curb illegal wildlife trade in the country. Hunting of cranes is a violation of the Balochistan Wildlife Protection Rules of 1975 and a more recent piece of legislation, the Balochistan Wildlife Protection, Preservation, Conservation and Management Act of 2014, under which all cranes are protected.

Pakistan is also a signatory to the Bonn Convention on Migratory Species and the Ramsar Convention, an international agreement on the protection of wetlands. Five of Pakistan’s 19 wetlands listed as Ramsar sites are in Balochistan and are estimated to be home to about 20,000 birds, but the sites themselves are in decline.

Hunting is a violation of the laws protecting all crane species in Pakistan, and fines for violating the laws range from 10,000 rupees (about US$56) to 30,000 rupees (US$170) or two months’ imprisonment, or both.

Salmeen Khpalwak is a social activist in Balochistan, struggling for the preservation of olive forests and the protection of wildlife in the province. He said the number of cranes migrating to the valley has dwindled with the passage of time, as little has been done to preserve and protect the cranes from being hunted.

“Wildlife conservationists are urging the government and non-governmental organisations to prioritise this issue at national level and take coordinated measures to conserve endangered species. Wildlife protection officers and district administrative officers are taking no action against these crane hunters. They either take a bribe or lack good administration,” Khpalwak lamented. 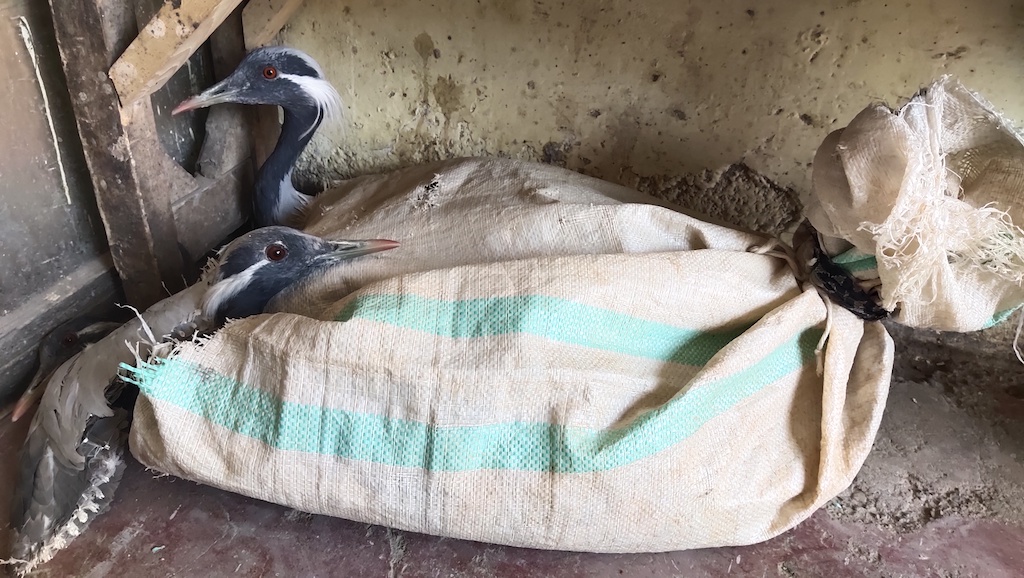 Poachers use tamed and caged cranes as decoys to attract flocks migrating to the area for spring. Photo: Rafiullah Mandokhail

Gul Nawaz, a resident of the Lakki Marwat area, explained that hunters use a pair of tamed cranes as decoys, separating the males from the females in two different cages. The pair is taken to the hunting spot at night, before the arrival of the migratory flocks. Soon after, the decoys start crying and the cranes flying overhead are deceived by them, swooping down close to the captured pair. (See this video shared by Quetta Voice.)

The hunters then throw a swirling iron weight, tied to a thread, over the flock to entangle the cranes’ necks, wings and feet. Sometimes hunters shoot down the birds with firearms. They also use mp3 voice recordings of the cranes’ honking to lure migrating flocks, according to Nawaz.

Borja Heredia, head of the Avian Species Team at the Conservation of Migratory Species of Wild Animals, said hunting in general, and of cranes in particular, is a complicated issue in Balochistan. Tribalism and involvement of influential individuals are considered to be the major hindrances in the implementation of the law.

“A strong multi-stakeholder platform needs to be brought on board with the various political, social and military stakeholders to develop a common conservation agenda. Otherwise, hunting of cranes will remain rampant in the future as well,” he suggested.

Although Balochistan has laws in place to protect its wildlife, the number of cranes is declining every year, due to relentless poaching in the province.

On the other hand, officials claim that they are committed to curbing illegal wildlife trade with an iron fist, as protecting wildlife from all sorts of threats is the government’s top priority.

WWF-Pakistan recommended that the district administration and wildlife department should use all their available resources to provide local communities with incentives to curtail crane hunting and trapping through public awareness of the ecological system.

Rafiullah Mandokhail is a multimedia journalist based in Islamabad, Pakistan. This investigation was published by The Frontier Post, Parliament Times and Quetta Voice. It is part of a series of investigations into environmental crime in Asia, supported by the Global Initiative Against Transnational Organized Crime, the Henry Nxumalo Foundation and Oxpeckers Investigative Environmental Journalism.