Tourism adds to pressures on snow leopards in northern Pakistan 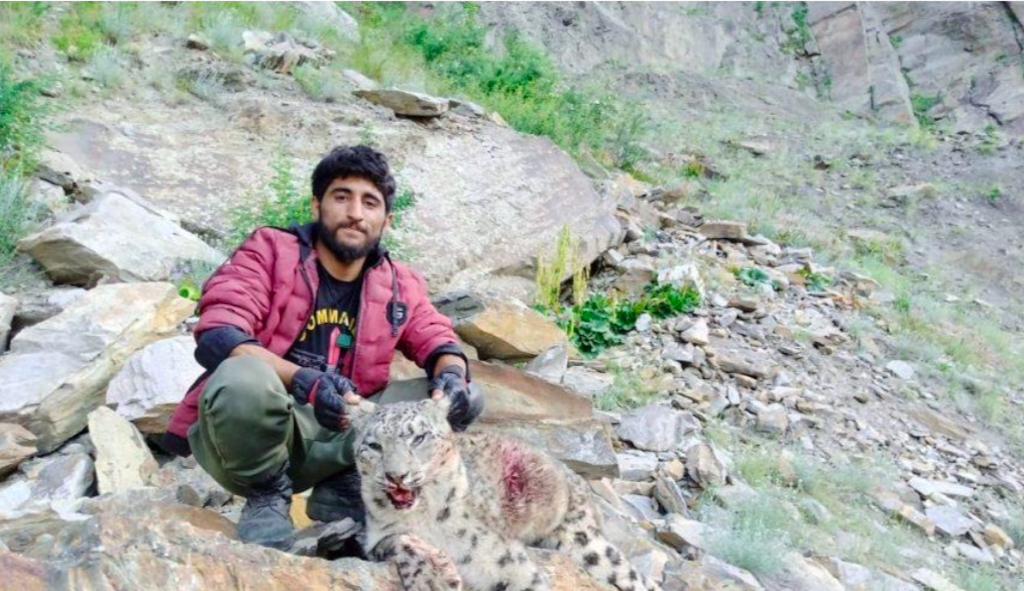 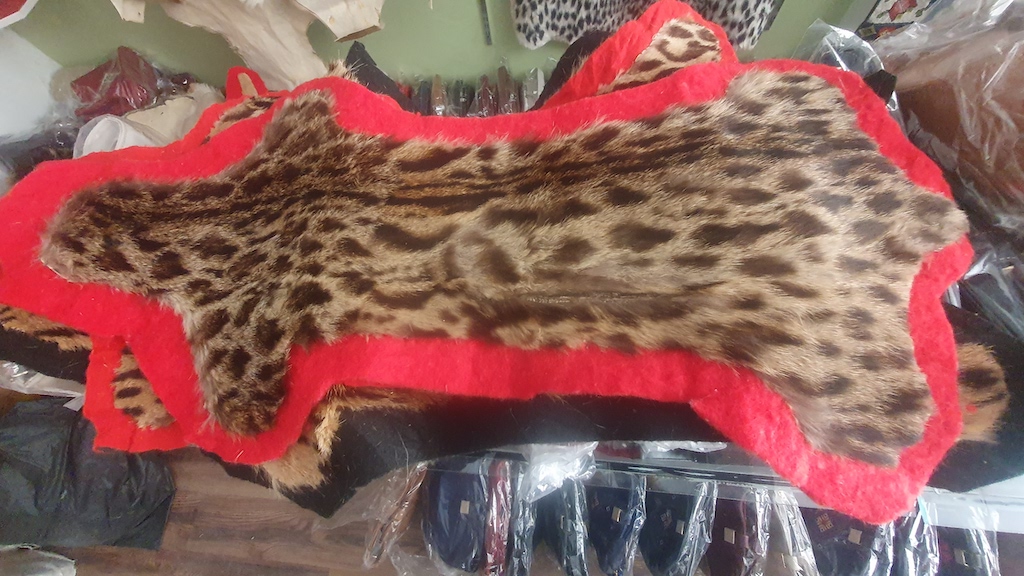 Leopard cat pelts marketed by a vendor in Hunza as snow leopard skins, in an attempt to raise the price. Photo © Daily Pakistan

Hunza, the crown jewel of Gilgit-Baltistan in northern Pakistan, is renowned for its wildlife, landscape, culture and organic food. Every year millions of both domestic and foreign tourists visit Gilgit Baltistan, particularly Hunza.

Formerly known as the Northern Areas, Gilgit-Baltistan is a region administered by Pakistan as an administrative territory, and constitutes the northern portion of the larger Kashmir area.

As the region is home to unique carnivorous and ungulate species, including snow leopards, leopards, lynxes, Sulaiman markhor and Marco Polo sheep, tourists throng the valleys in a bid to see them.

However, not everyone comes to Gilgit-Baltistan with the same intent. There are poachers entering the region under the guise of wildlife tourism. There are also people trading the skins of carnivorous species illegally right in the heart of the main tourist attraction of Gilgit-Baltistan – Hunza.

An Oxpeckers investigation revealed that in the Karimabad valley of Hunza some of the shops selling shawls and cultural artefacts are openly trading leopard cat, red fox and mink skins; and caps and jackets made from the fur of Himalayan wolf and red fox.

One vendor had up to five leopard cat skins. He was marketing the pelts as those of snow leopards, as these can fetch a higher price and ordinary tourists wouldn’t be able to identify them as leopard cat skins.

Snow leopards are classified as a distinct taxonomic species from leopard cats, which are small wild cats native to continental South, Southeast and East Asia and are listed as of least concern on the Red List of Endangered Species by the International Union for Conservation of Nature (IUCN). Snow leopards are native to the mountain ranges of Central and South Asia, and are classified as vulnerable by the IUCN. 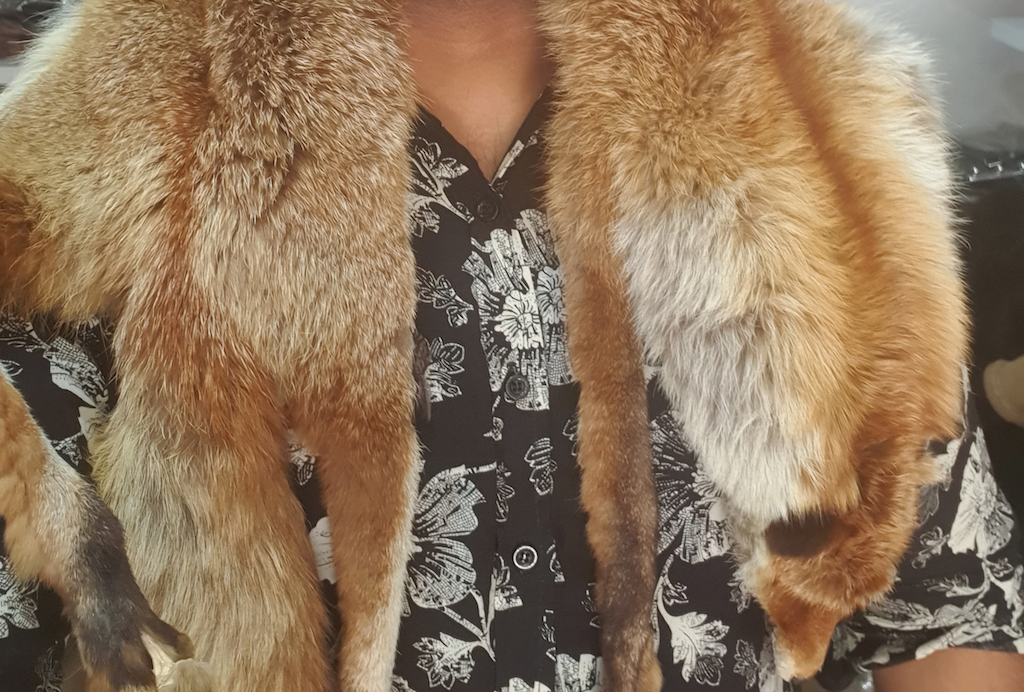 A member of the investigating team wears the pelt of a red fox for the picture. Photo © Daily Pakistan

The Oxpeckers investigating team went to the markets disguised as tourists and sought permission from the vendors to take photos of the skins.

When the photos of the leopard cats’ skins were shown to experts at the Wildlife Department of Gilgit-Baltistan and Karakoram International University (KIU), it was confirmed that they were not skins of snow leopards.

Dr Saeed Abbas, an Assistant Professor from the Animal Sciences Department at KIU, was one of the experts to examine the photos. “These could be the hides of leopard cat but since the species is rare in Gilgit-Baltistan and difficult to hunt, it is possible that it might have been hunted outside of Pakistan and smuggled here for sale,” he said.

Looking at photos of the wolf caps, Dr Abbas said the fur was from the Himalayan wolf found in Gilgit-Baltistan. There are still fragmented populations in the region, though the wolves are hunted extensively in Gilgit, Diamer and Astore districts for predating on livestock, he said.

“In my village in SAS valley, in District Nagar, wolves have disappeared due to illegal hunting,” he added. Similarly, red foxes are killed for attacking poultry, Dr Abbas said. 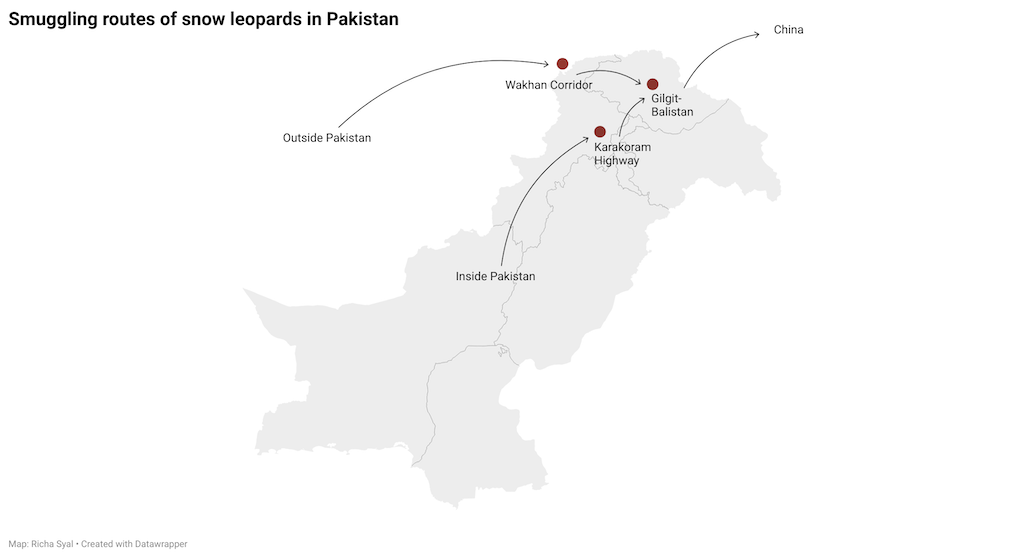 When the Hunza vendor was asked whether the skins he was selling came from snow leopards (actually leopard cats) hunted in Gilgit-Baltistan or whether they were brought in from outside Pakistan, he said they were smuggled through the Wakhan Corridor – a narrow strip of territory in Afghanistan, extending to China and separating Tajikistan from Pakistan.

For centuries traders from Hunza valley in Gilgit-Baltistan and the Wakhi tribe in Afghanistan have engaged in barter trade at the Wakhan Corridor.

The possibility of the Wakhan Corridor being used for wildlife trafficking requires further investigation, said Dr Ali Nawaz, director of the Snow Leopard Foundation in Pakistan.

Nawaz said the foundation had conducted a detailed survey on the illegal hunting and trade in snow leopards in 2017.

“The survey team, disguised as potential buyers, went to the markets of Gilgit, Peshawar, Islamabad, Lahore, and Karachi,” he said. “We concluded that from 2007 to 2017, at least 50 snow leopards had been poached in Pakistan, and were killed by shooting, poisoning and snares.”

More recent figures on the hunting and illegal trade of the elusive cat in the region are not available.

According to Nawaz, snow leopard poaching incidents are still taking place in Gilgit-Baltistan and parts of Khyber Pakhtunkhwa, but they have reduced recently due to the introduction of tough laws by the wildlife departments.

Nawaz said research had shown hunters sell the snow leopard pelts to traders for a meagre amount, indicating that the trader or middleman gets the real profit.

Dr Saeed Abbas of KIU believes that illegal trade is going on unabated in Gilgit-Baltistan, and the hides of snow leopards and other endangered species are being sold to tourists.

“I got to know this when I was working with World Wide Fund for Nature-Pakistan on a survey to investigate illegal wildlife trade in Pakistan,” he said. “The survey recorded the use of derivatives of 12 mammals (including snow leopards, Indian pangolins, common leopards, black and brown bears); five reptiles (marine and freshwater turtles, spiny-tailed lizards and snakes); two birds (peregrine and saker falcons); and many invertebrate species being sold by street vendors and local herbalists.”

The survey showed a total of 14 social media groups out of 24, and 14 Facebook pages out of 130 assessed, were found to be involved in the illegal sale of wildlife in Pakistan, Abbas said.

“As we were disguised as potential buyers to get information for the survey, the traders from Gilgit told us that they can get us the skins of the snow leopard, Himalayan brown bear and Himalayan wolf if we are interested,” he said.

The results of the survey were “re-confirmed from the fact that when a male brown bear was killed in Gilgit-Baltistan in 2019, its genitals were chopped off. This was not retaliatory killing – the bear was hunted for its genitals,” he added.

Dr Abbas also referred to an incident that took place in Skardu market in Baltistan region in 2020, where a snow leopard skin was found though the wildlife department couldn’t trace the culprit. “The District Forest Officer, Muhammad Akram, said it was an old skin.”

In a separate incident in 2018 that took place in Misgar valley of Hunza, a snow leopard was killed in retaliation for the loss of livestock by locals and its body was found without the skin. Such incidents indicate that even in the case of human-snow leopard conflict, the snow leopard is not just killed but its skin is also peeled off to be sold in the market, Abbas said.

“Sadly, the poaching of snow leopards is taking place in Gilgit-Baltistan but is not being reported,” he said. 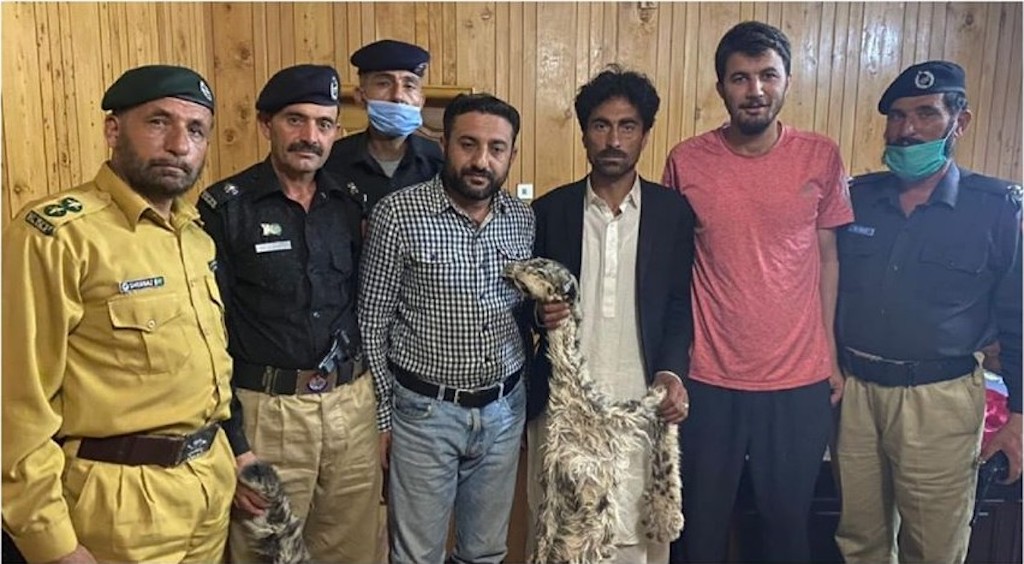 “This is a sensitive matter because people in Gilgit-Baltistan are concerned about wildlife and the environment,” according to Dr Zafar Khan, chairperson of the Department of Forestry, Range and Wildlife Management at KIU.

He is of the view that the possibility of illegal hunting of snow leopards in the region cannot be ruled out. “Retaliatory killing and carcass poisoning happen, and to a lesser extent illegal trade of snow leopard skins and its body parts,” he said.

In fact, Ahmed believes that the population of snow leopards in the region has increased. “There are an estimated 150 to 200 snow leopards in Gilgit Baltistan and we have enacted strict laws to reduce illegal hunting,” he said.

“Last year in October, when a female snow leopard was hunted in Hopper valley, in Nagar, Gilgit-Baltistan, the hunter was jailed for six months and was fined Rs0.5 million [about US$2,860]. The matter is still in court.”

Pakistan’s draft Wildlife Act 2021 and its predecessor, the 1975 Wildlife Act, categorically state that it is illegal to trade in wildlife in Pakistan without a certificate of lawful possession. Even if the wild animal has died a natural death, it still belongs to the government. 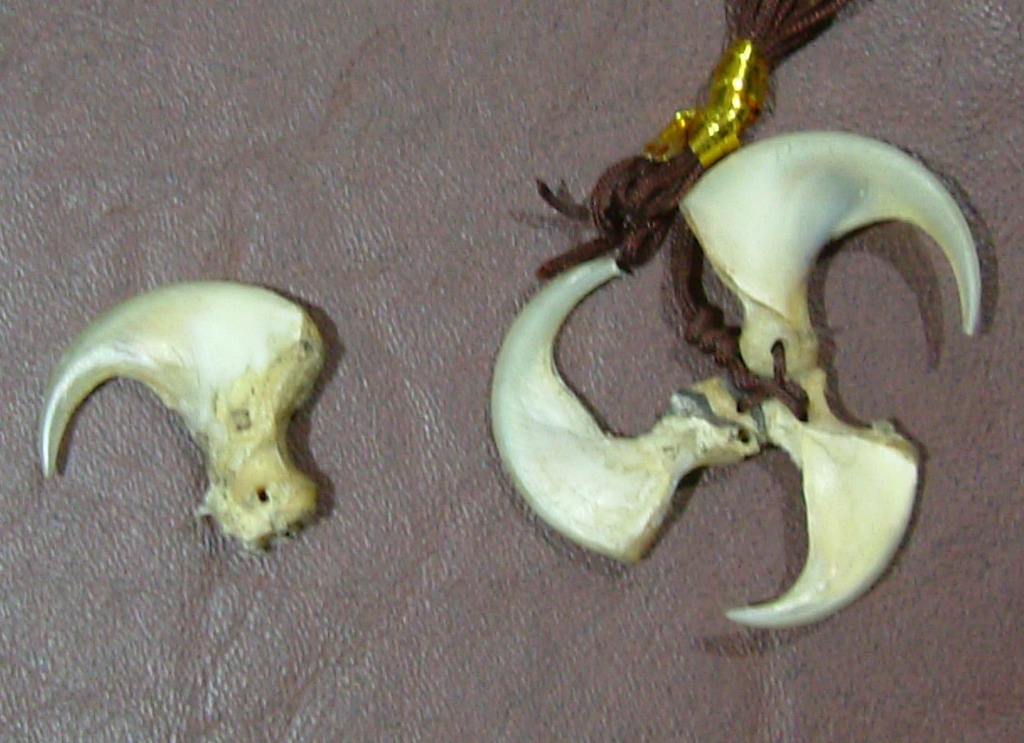 Ashiq Ahmed Khan, a senior wildlife expert in Pakistan, denied the existence of any organised racket of snow leopard poachers operating within Gilgit-Baltistan.

“The illegal hunting of snow leopards and trade in their body parts is next to none. Hardly five snow leopards might be hunted in a given year, which is documented. Other than that, it is not documented.”

Khan said more than 95% of the snow leopards hunted is actually retaliatory killing. “The bakarwals [nomadic community members] kill the snow leopards in retaliation for the loss of livestock and such incidents usually occur on high pastures,” Khan added.

“It is nearly impossible to trace such incidents unless the wildlife watcher is present at the crime spot, otherwise scavengers such as the Himalayan vulture, Bearded vulture, Magpie, and Alpine chough consume the carcass. The nomads don’t sell the snow leopard skin in Gilgit and other cities due to their fear of getting caught,” he said.

“The issue of retaliatory killing of snow leopards by bakarwals has neither been investigated nor documented.”

All the experts indicated that there is limited information available about possible trade in the bones of snow leopards and the smuggling of their body parts to China, where wild cat parts are sold for medicinal and commercial potions.

“The bone trade of snow leopards is rare, and has not been reported in Pakistan. However, it is possible that the snow leopard bones are being smuggled to China through the Karakoram Highway, which needs to be investigated,” said Ashiq Ahmed Khan.

Dr Ali Nawaz of the Snow Leopard Foundation agreed that the possibility of smuggling snow leopard skin and bones to China cannot be ruled out. “We did not get clear evidence on that, though there is the possibility,” he said.

This investigation was produced in partnership with Daily Pakistan, which published it here. It is part of a series on illegal trade of snow leopards, supported by Oxpeckers Investigative Environmental Journalism and the Global Initiative Against Transnational Organised Crime