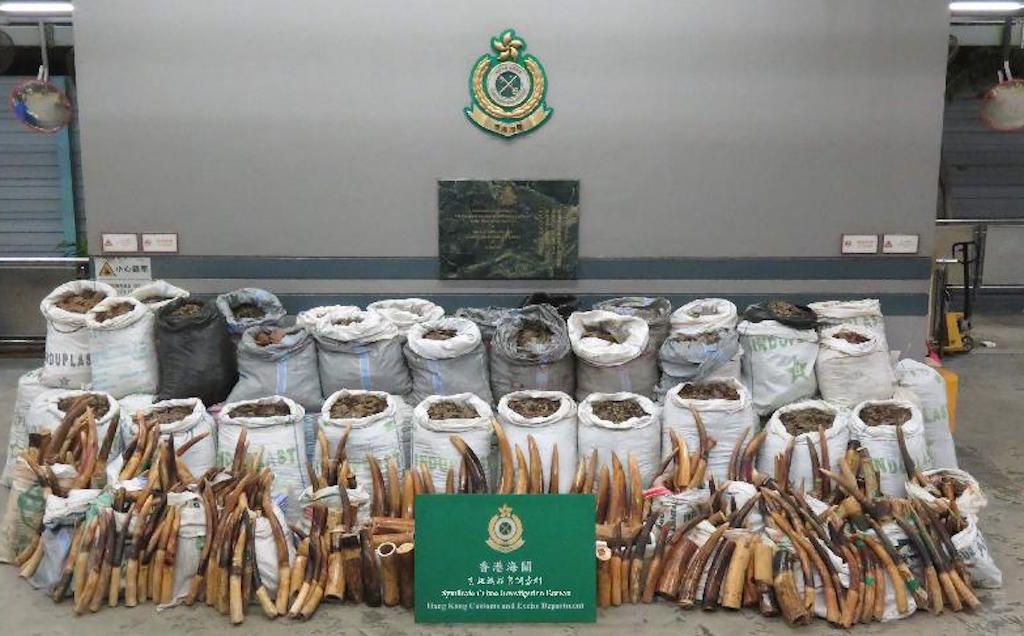 19 May Business as usual for Hong Kong’s wildlife masterminds

Seizures of smuggled wildlife are so huge in Hong Kong that they are measured in hundreds of tonnes. In 2019 alone, 375 tonnes – equivalent to 375,000kg – of endangered species and their parts were seized, according to the city’s Customs and Excise Department.

With its busy ports and transport networks, Hong Kong has been long known as a major trading hub of endangered species. Despite its small size, wildlife seizures in the city are comparable to those of big nations — in 2019, for instance, they were equivalent to almost a third of mainland China’s seizures.

In 2018 the government upped punitive measures and penalties for wildlife smuggling offences through an amendment to the Endangered Species Ordinance, which now provides for a fine of up to HK$10-million and/or 10 years in jail.

However, wildlife trafficking in the city has showed no signs of slowing down, and data collated by #WildEye Asia shows that the new legal provisions are having little impact on organised criminal networks involved in the huge illegal shipments.

“The reason to increase penalties was for deterrence, but we haven’t seen a reduction in the volumes of seizures,” said Sophie le Clue, environment programme director at the ADM Capital Foundation, a Hong Kong-based non-profit that campaigns against wildlife crime in Asia. “We believe that’s because the people they are prosecuting are at a very low level.”

Based on analysis of court proceedings and publicly available data since 2017, ADM research shows that the highest rate of prosecution resulting from recorded seizures —  84% — occurred when illegal goods were found hidden on individuals, or “mules”, arriving in Hong Kong via the airport. The individuals carrying the goods were mostly financially strained, with no previous criminal records, and had committed their crime under the instructions of a friend, a boss or a contact.

“Through analysis of the prosecutions, we have seen a focus on prosecuting individuals who are caught red-handed,” said Sam Inglis, wildlife programme manager at ADM.

The foundation found that although increasingly harsh sentences are being handed down by the courts, these have done little to deter those benefiting from illegal supply chains, according to its study published in March 2021, “Still Trading in Extinction: The Dark Side of Hong Kong’s Wildlife Trade”.

A case in 2019 exemplified the situation.

In July 2019, customs agents at the Hong Kong International Airport intercepted two men who were planning to take four suitcases out of the airport’s restricted area. Inside, the agents found 100kg of pangolin scales. The men were swiftly arrested.

One of the men, 21-year-old Ding Wei, who was working in the Democratic Republic of Congo as a gold trader, said in court that he was instructed by another man to bring four suitcases to Hong Kong, and to hand over two of the suitcases to 47-year-old Zhang Guozhu upon arrival.

Ding said he was promised 12,000 yuan as compensation, and Zhang — a farmer from mainland China who was diagnosed with schizophrenia — was to receive 1,000 yuan for flying into Hong Kong to pick up the suitcases, and take them over the border to mainland China.

Ding and Zhang were sentenced to jail terms of 27 and 21 months respectively.

“The tricky thing here is, the individuals are not motivated by trafficking the goods, they are motivated by financial incentives, making them easily replaceable,” Inglis said. “There is a whole network of people, bank accounts and companies that link to wildlife trafficking, but not enough effort has been put into understanding the full scope and the whole network that is involved in the commission of the crime.”

Global significance: Ivory and the largest amount of pangolin scales ever seized by Hong Kong Customs. It was labelled as frozen beef, arriving from Nigeria and bound for Vietnam. No prosecutions have been made so far, and the gang has continued with their smuggling activities. Photo courtesy Customs and Excise Department

Another long-standing issue is that authorities in Hong Kong do not appear to be prosecuting the largest seizures made in the city, citing lack of evidence, Inglis said.

According to ADM research, the largest volumes of illegal wildlife were brought to the city in shipping containers. But of the 19 seizures involving sea cargo containers in 2018 and 2019, authorities made just seven arrests, resulting in only one successful prosecution.

The successful case resulted in the conviction of a part-time salesperson and housewife, Cai Huimian, whose address and phone number were used on a customs declaration form for the illegal shipment of 29kg of Honduras rosewood. She pleaded guilty and was sentenced to three months in prison. None of the masterminds behind the shipment was prosecuted.

Data collated by #WildEye Asia on court trials between 2018 and 2020 shows that it’s not rare in Hong Kong for globally significant cases to turn cold.

The goods were transported in a refrigerated container labelled as frozen beef, arriving from Nigeria and bound for Vietnam. The container was linked to a man named Lin.

Investigations by the Fuzhou Customs Anti-smuggling Bureau discovered that Lin and three associates had been smuggling ivory, rhino horns, pangolin scales and other endangered species out of Africa since 2017. The contraband would be shipped to ports in Hong Kong and Vietnam, then across the border to mainland China through places like Guangxi.

According to local media reports, the gang continued with their smuggling activities despite the record bust and in February 2019 again bought ivory and pangolin scales in Nigeria, concealed them in frozen beef containers and sent them to Singapore for transit to Vietnam.

Follow-up investigations by Hong Kong authorities resulted in the arrest of a 39-year-old male proprietor and a 29-year-old female staff member of a trading company in Mong Kok. No prosecutions have been made so far.

“As far as we are aware, no masterminds have actually faced penalties or gone to prison for their crime,” Inglis said.

Could a Bill change that?

“When you have wildlife being smuggled on a container ship, what often happens in Hong Kong is that investigators will go after the logistics company that’s involved in the case, they will say that they don’t know who was responsible at the other end, then the investigation hits a dead end,” said Amanda Whitfort, associate professor of law at the University of Hong Kong.

To identify the network behind the crime, intel related to financial transactions is critical, she said. But Hong Kong’s primary law regulating illegal wildlife trade – the Protection of Endangered Species of Animals and Plants Ordinance (Cap 586) – does not give prosecutors sufficient legal powers to identify and pursue international smuggling syndicates that traffic wildlife through Hong Kong.

That could change if a proposed amendment Bill is approved, Whitfort said.

The proposed amendment, put forward by Elizabeth Quat of the Democratic Alliance for the Betterment and Progress of Hong Kong, the city’s largest pro-establishment political party, and several wildlife NGOs will include wildlife crimes under the Organised and Serious Crimes Ordinance (OSCO) .

The legislative reform, explained Whitfort, would enable authorities to tackle wildlife crimes with powers that are currently reserved for serious crimes such as drug and arms trafficking.

Under OSCO, investigators could use court orders to make suspected wildlife smugglers answer questions and hand in materials such as business and contact records.

“Under Cap 586, people who are at the end of the trade have the right to silence, and therefore investigation ends,” Whitfort said. “If the crime is in OSCO, they cannot rely on their right to silence. It would give prosecutions the lead that they need to ensure linked-up chains are being identified, and people who are masterminds are therefore convicted.”

“Prosecuting the mules does not appear to be critical to the operations of criminal syndicates, because the mules are replaceable, and the people who are higher up the chain couldn’t care less,” Whitfort says. “With wildlife, traceability is key.”

It would be good news about a trade that has global impacts, said Le Clue: “There’s a global biodiversity crisis and wildlife trade is contributing to that. It’s not just about enforcement in our city, it’s part of a solution to a global problem, and Hong Kong can actually make a difference.”

Hsiuwen Liu is a journalist based in Hong Kong. Her reporting focuses on geopolitical developments, human rights and social justice around the region. This investigation was sponsored by #WildEye Asia and Internews’ Earth Journalism Network.

Data used in this investigation is shared in our Get the Data section. You can track these and other cases by subscribing to alerts on the #WildEye Asia tool here.