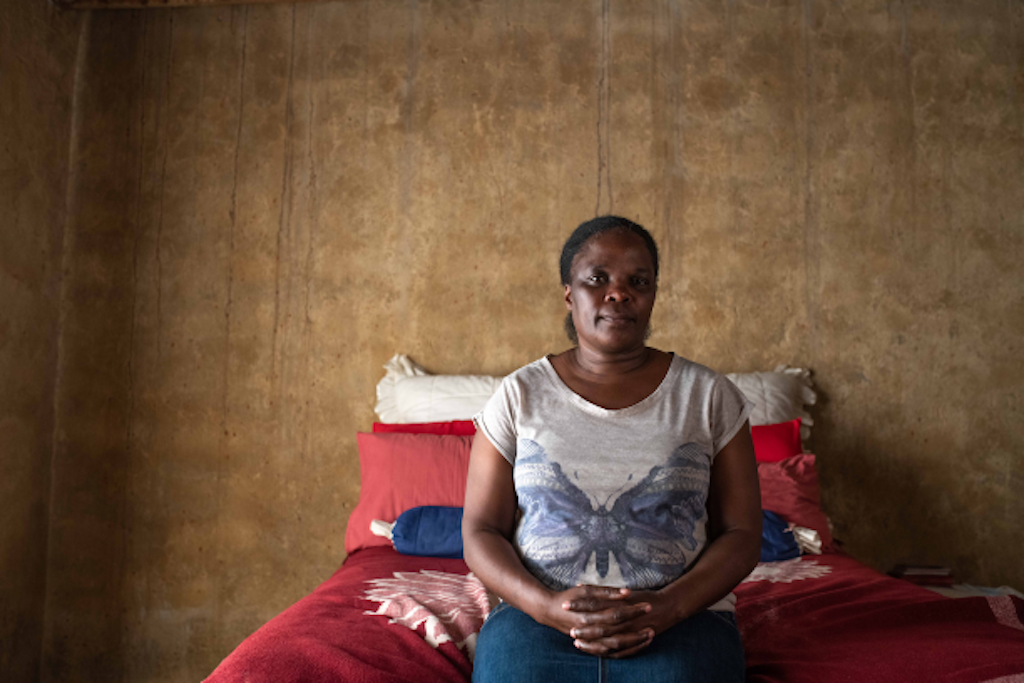 27 May Deadly Air: a case about real lives & real people

A landmark court case sees the South African government being sued for the first time by environmental activists for the alleged violation of a Constitutional right to clean air. Andiswa Matikinca reports

‘I feel the pain’: Promise Mabilo has lived in Emalahleni for the past 22 years and has been directly affected by the air pollution in the area. Photo: Daylin Paul / Life After Coal

Promise Mabilo has been living at the epicentre of the world’s largest coal-fired power plant emissions hotspot for the past 22 years. Her son was diagnosed with asthma in 2008, which has affected his studies as well as his childhood.

Mabilo is one of the applicants in the landmark “Deadly Air” case heard in the Pretoria High Court on May 17 and 18. She gave an emotional account following the conclusion of the hearing about how the air pollution in the Highveld Priority Area in the north-east of South Africa has affected her.

“For me this case is very important because people around the Highveld are really suffering,” said Mabilo. “I have a son who is suffering from asthma and I feel the pain when I look at him.

“His childhood had limitations because he couldn’t play with other children, run around or carry heavy objects. I also noticed his school performance dropping because he wasn’t attending school regularly as he would be sick for one week then be okay the next.”.

Mabilo, who has been living in Emalahleni for the past 22 years, said the poor air quality has also affected her emotionally. “The more I see the results of breathing in this polluted air and the people I live with in the community who are also sick and suffering from asthma, I feel abused and violated because I know what the cause is,” she said.

Two environmental justice groups, groundWork and the Vukani Environmental Justice Movement, represented by the Centre for Environmental Rights (CER), are seeking recourse from the High Court on the high air pollution levels in the Highveld Priority Area, which was formally declared a pollution hotspot in terms of the National Air Quality Act in 2007.

Mabilo said she would appreciate a positive outcome that shows the courts see and acknowledge the problems they are dealing with. She hopes that serious measures will be taken to make sure that the polluters are compliant with air quality laws and that there will be serious consequences for those who fail to do so.

“We wish for the government departments to work together with other departments, such as the department of health. We do not just want compliance from the polluters because once we get sick, we even struggle to get proper healthcare because we don’t have money,” she said. 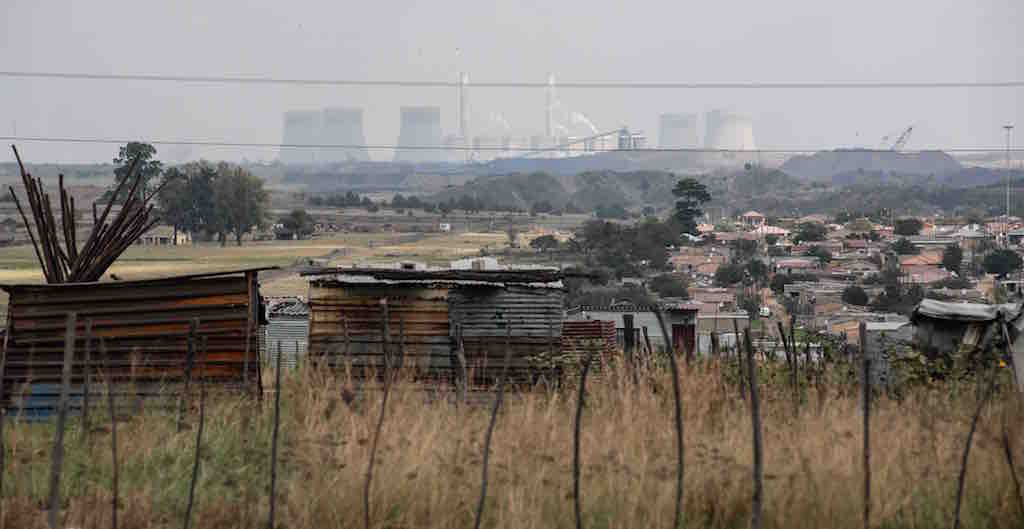 Pollution hotspot: The Highveld Priority Area was declared a pollution hotspot in 2007 by the department of environmental affairs. The area is home to most of South Africa’s coal mines and 12 of the country’s coal-fired power stations. Photo: Daylin Paul / Life After Coal

“This is a case about real lives and real people,” said groundWork’s environmental health campaigner, Rico Euripidou, at the virtual press conference hosted by CER. “The people most impacted by air pollution are the least responsible for the pollution, and to make matters worse they have the least agency and the least power to act.

“That is why this court case is necessary, to give those people who are vulnerable the agency so that the government is held accountable to what they themselves said they would do,” Euripidou said.

In court oral legal submissions were made by advocates representing the applicants, the state respondents and the United Nations Special Rapporteur for Human Rights and the Environment,  Professor David Boyd. Boyd was admitted as amicus curiae (a friend of the court) in November 2020 and is represented by the public interest law organisation Lawyers for Human Rights in the matter.

The respondents are the president of South Africa, the minister of forestry, fisheries and the environment, the national air quality officer, and the MECs for agriculture and rural development in Gauteng and Mpumalanga.

According to Bobby Peek, the director of groundWork, this campaign is not a new issue that started two years ago when the applicants presented papers for the government and the judiciary to hear. “We started following government processes in 2007 to be able to understand how we can assist the government in making the situation better in the Highveld Priority Area.

“That failed, protesting failed, challenging the government to hold proper records and meeting minutes failed, and eventually we had to seek legal action,” Peek said.

The Highveld Priority Area was formally declared a pollution hotspot in terms of the National Air Quality Act by the environment minister in 2007. The area covers parts of the Gauteng and Mpumalanga provinces, and is home to major towns such as Emalahleni, Middelburg, Secunda, Standerton, Edenvale, Boksburg and Benoni – all known for their poor air quality.

This constitutional litigation, which has become known as the “Deadly Air” case, was launched in June 2019 requesting the court to declare that the poor ambient air quality in the Highveld Priority Area constitutes a violation of Section 24a of the Constitution, which states that “everyone has the right to an environment that is not harmful to their health or wellbeing”.

The court application, according to Timothy Lloyd, an attorney from CER, “addresses the state of the air quality in the Highveld Priority Area, the health impacts caused by the various pollutants, independent expert studies confirming the major sources of air pollution, namely power generation in the area, and the coal mines that supply the 12 coal-fired power stations in the Highveld”.

In October 2017 the CER estimated that 2,239 human deaths a year could be attributable to coal-related air pollution in South Africa, as well as more than 9,500 cases of bronchitis among children aged six to 12.

In the same year, the Department of Environmental Affairs conducted its own mid-term review to assess whether the Air Quality Management Plan (AQMP) launched in 2012 was meeting its objectives. It found that there had been no meaningful improvement in the air quality and that there had been limited progress in implementing the plan.

The applicants have asked the Pretoria High Court for two primary orders: a declaration that the poor air quality in the Highveld Priority Area is a breach of the residents’ right to “an environment that is not harmful to their health and wellbeing”; and an order directing the minister within six months of this order to prepare, initiate and prescribe implementation regulations in terms of Section 20 of the National Air Quality Act, which will be to enforce the AQMP that is in place.

Judge Colleen Collis reserved judgement in the case, which means the applicants now wait with bated breath for her to consider all the facts presented before the court, draft her judgement and come to a decision.

Update: On March 18 2022, Judge  Collis handed down a judgement on the landmark ‘Deadly Air’ case recognising the poor air quality in the Mpumalanga Highveld region as a breach of the residents’ Constitutional right to an environment that is not harmful to their health and well-being. She  ordered the government to pass regulations to implement and enforce the Highveld Priority Area Air Quality Management Plan, aimed at cleaning up the air on the Highveld to meet health-based air quality standards.

In a press release following the handing down of the judgement, the CER said that “this [judgement] has important implications for big polluters Eskom and Sasol, as well as for national and local government capacity for air quality management – particularly compliance monitoring and enforcement.”

• You can find the judgement here

Andiswa Matikinca is manager of the #MineAlert platform. This article was produced with support from Oxpeckers Investigative Environmental Journalism and Code for Africa’s WanaData project