Until the last tiger roars 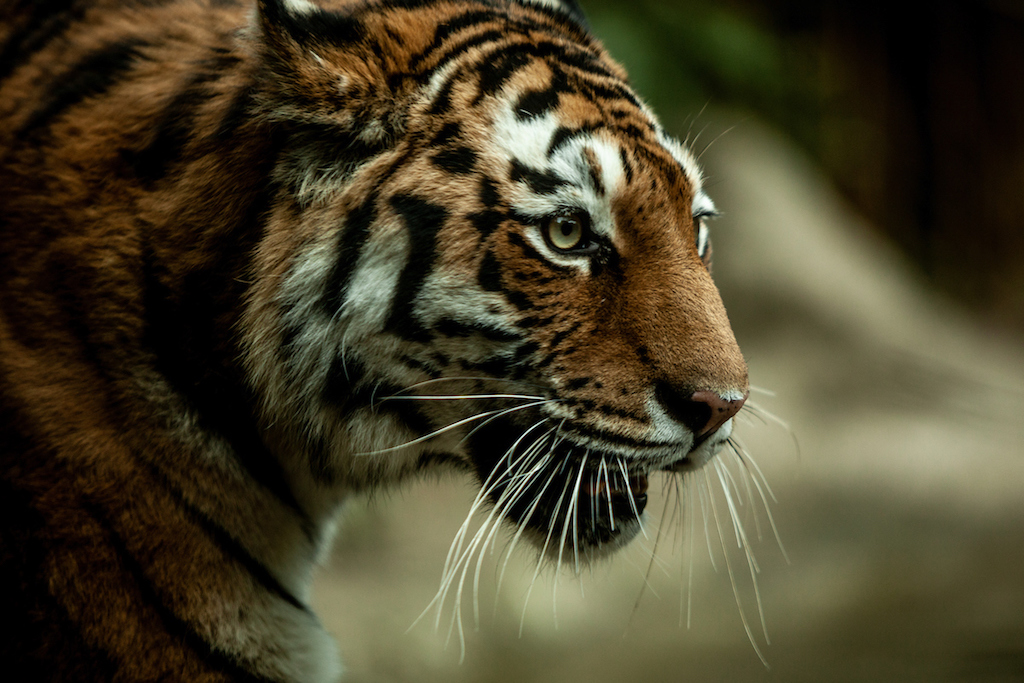 10 Mar Until the last tiger roars

Lack of data about the tiger trade in Europe is stimulating illegal trafficking in this endangered species – and Italy and France are two of the major hotspots. Rudi Bressa investigates

Wild no more: Conservation groups estimate there are more big cats living in captivity on the continent than in the wild. Photo: Elisabetta Zavoli

“I tried to get into one of the cages for the animals. And literally, I cried. There was no way to turn round, to lift one’s head, there was no possibility to feed them, or to give them some water. There was nothing there. If an animal is transported in these conditions, there is no intention other than the certainty that he dies.”

David van Gennep, director of the European animal welfare organisation Aap (Animal advocacy and protection), describes his experience when he got into one of the cages used to transport 10 tigers from Italy to Dagestan, in Russia’s Caucasus.

The starving, thirsty and filthy tigers had been transported for six days across some 2,000km, and one had died by the time they were stopped by border guards at the crossing between Poland and Belarus in October 2019. Investigations indicated they had been sent by a circus outfit in Italy, and were most likely destined for the black market in tigers and their body parts. (Find further details of the case on the #WildEye mapping tool here.)

The incident highlighted Europe’s role in illegal tiger trade, and sparked debate among animal welfare organisations, politicians and the public about the management of big cats born and grown in captivity. Poznan Zoo in Poland resuscitated the nine surviving tigers; four of them were too weak to travel and were kept by Poznan and another zoo in Poland; the other five were sent Aap’s rescue centre in southern Spain. 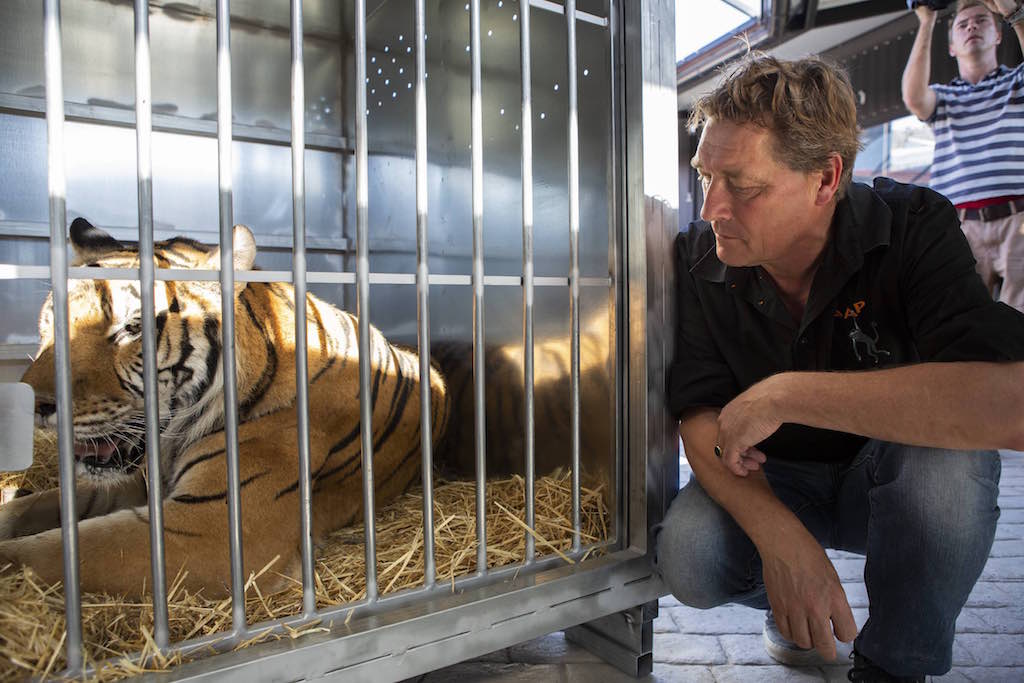 Destined to die: David van Gennep, director of the animal welfare organisation Aap, with one of the tigers seized en route to Dagestan in 2019 and re-directed to sanctuaries. Photo courtesy Aap

Nobody knows exactly how many tigers there are in Europe. Conservation groups estimate there are more big cats living in captivity on the continent than in the wild, and that differences in laws from country to country create opportunities for wildlife traffickers.

Wild tigers are an endangered species and are included in the Red List of Threatened Species by the International Union for Conservation of Nature (IUCN). Though they are strictly protected, the world population has decreased from about 100,000 to about 3,900 individuals over the past century, according to scientific reports. Loss and fragmentation of habitats, and above all poaching, are killing off these symbols of “wild nature”.

Trade in wild tigers is forbidden under Appendix I of the Convention on International Trade of Endangered Species (CITES). In Europe, the Wildlife Trade Regulations of the European Union forbid the commercial use of the species, although some exemptions are made for educational purposes, research or breeding.

However, the growth in private captive tiger facilities across the EU and the UK, combined with weak legislation and limited checks, has seen tigers and their parts enter the illegal trade, according to a December 2020 report compiled by WWF and TRAFFIC, Falling Through the System: The role of the European Union captive tiger population in the trade in tigers.

The lack of reliable data about captive-bred tigers means authorities are unable to control the commercial exploitation of this species, stimulating not only legal and illegal trade of live tigers, but also trade of by-products as pelts, bones and meat, often to meet demand in Asian countries. According to one insider who asked not to be named, a dead tiger can fetch more than 40 times the amount paid for a live tiger.

According to data reported by the global welfare organisation Four Paws in March 2020, the number of captive tigers in zoos, wildlife parks and circuses was 913. The NGO said an estimated 23 of them were in Italy.

“These numbers do not depict the reality,” the report cautioned, “since 19 countries (of which 15 are EU member states) were unable to share numbers. Through media reports, observations by Four Paws and intelligence from local partners it is clear that the actual number of captive tigers in Europe is much higher.”

In Italy authorities treat the tiger as dangerous for public health and safety. They may only be kept by institutions approved by the prefectures, and by circuses and zoos. Transporting them across borders needs to be authorised by import and export permits.

In response to #WildEye inquiries about the number of tigers in captivity in Italy, the Environment Ministry said there are now a total of 75 in zoos with permits, or where permits are under evaluation. This number is low compared to the estimated figures provided by CITES.

After the 2019 seizure on the Polish and Belarusian border, the Environment Ministry asked the Italian CITES division to investigate the number of tigers in captivity in the country. This census showed there were 93 tigers (two of them hybrids between lions and tigers) in zoos, rehabilitation centres and breeding facilities, and 68 tigers in circuses.

“This is one of the biggest problems concerning the management of exotic fauna in Europe: not all countries have updated data, and Italy has badly incomplete data,” said Andrea Casini, head of the exotic animals section of the Anti-Vivisection League (Lav).

“The difference between reality and official data involves hundreds of tigers. Our archives indicate the number of tigers in the circuses would be at least 160, without counting those in the zoos or on private properties.”

According to Casini this situation “is out of control: anything might happen to the animals because a united register between the different inspection institutions doesn’t exist. This data gap opens doors for the trafficking of this species.”

Data collated by #WildEye on seizures, arrests and court cases confirms that illegal tiger trade has been on the rise in Europe between 2011 and 2020, with at least 25 seizures and seven convictions secured in court.  France and Italy are two of the major hotspots on the continent, judged by the number of seizures and convictions.

While body parts are a popular commodity and are primarily sent to Southeast Asia, live animals are mainly traded as exotic pets or for entertainment purposes. Animal-based circuses and interactive experiences – for example, offering paying customers the opportunity to take selfies or hold tiger cubs – are common throughout both western and eastern Europe. 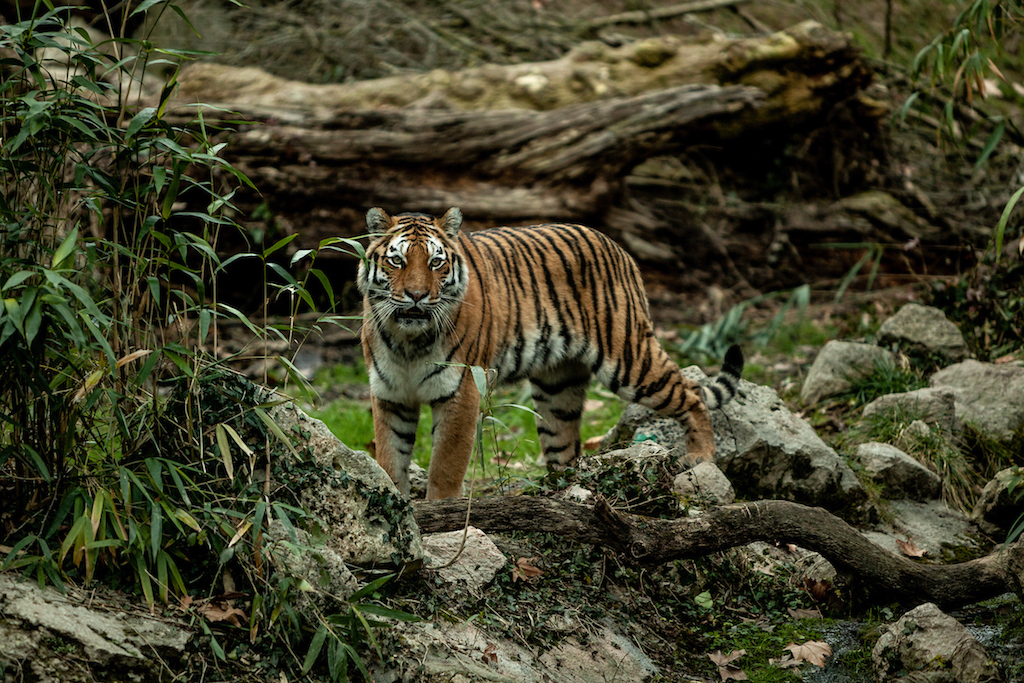 Raising awareness: A Siberian tiger at Natura Viva Park, a zoo in Italy. Owners of captive facilities say their aims include helping people get a deep interest in these animals. Photo: Elisabetta Zavoli

For an insight into how captive breeding facilities work, #WildEye visited one of the biggest institutions in Italy, which asked not to be named. At the time the outfit housed 18 captive tigers and 18 other big cats, some of which were trained for use in movies or advertising campaigns.

Observing the tigers, it was evident the animals had built a relationship with their trainers and keepers. They seemed to be healthy and active, they didn’t show signs of stress, and were even approachable, always under the trainer’s guidance. The cages seemed in accordance with the law (80 square metres), even if they didn’t have many outside extensions, either natural or artificial.

“The interest should not be in knowing how many tigers there are. The main point is knowing what these tigers in captivity are used for,” said Giacomo Ferrari, one of the associates and trainers at the facility.

Ferrari boasts decades of experience of working with these animals, and said captivity has two basic advantages: the first is for conservation, because it is useful to have a genetic line that helps keep the tiger population healthy. The second is awareness, and the chance to create knowledge of and empathy towards tigers.

“Captivity needs to create a deep interest and to make people understand that this animal is like all others and, as such, he has to be respected,” he said.

Inside the facility guided tours are possible, for visitors to look closely at the big cats. Ferrari explained his idea of training, saying it is a job like any other that needs to yield results: “Violence doesn’t pay, because there is no gain. Those who still use violence in training are going against their economic interest.”

The training, understood in this way, also has medical benefits, he said: the same methods are used for taking biological samples, so that vets and biologists can use these to test the health of the animals or to carry out deeper investigations.

His outfit keeps in close contact with the circus sector, with which he exchanges individual cats to create better genetic lines. “My interest is ensuring that my animals are healthy, beautiful and balanced,” he said.

Asked about Italy’s role in the international trade of tigers, Ferrari denied that Italy is involved: “Italy doesn’t export tigers – simply because we don’t have enough to supply a market.”

France, Germany and East European countries are the real breeding hotspots, in his opinion. The demand for by-products and derivatives from tigers is growing, as the recent seizures confirmed, to supply demand for “medicines” in the Far East.

“Nowadays it’s not possible to stop this trade because the demand is too high,” he said. “The way forward is to help people get a deep interest in these animals, and to help them understand that thinking an animal can heal us is wrong. This is the secret.”