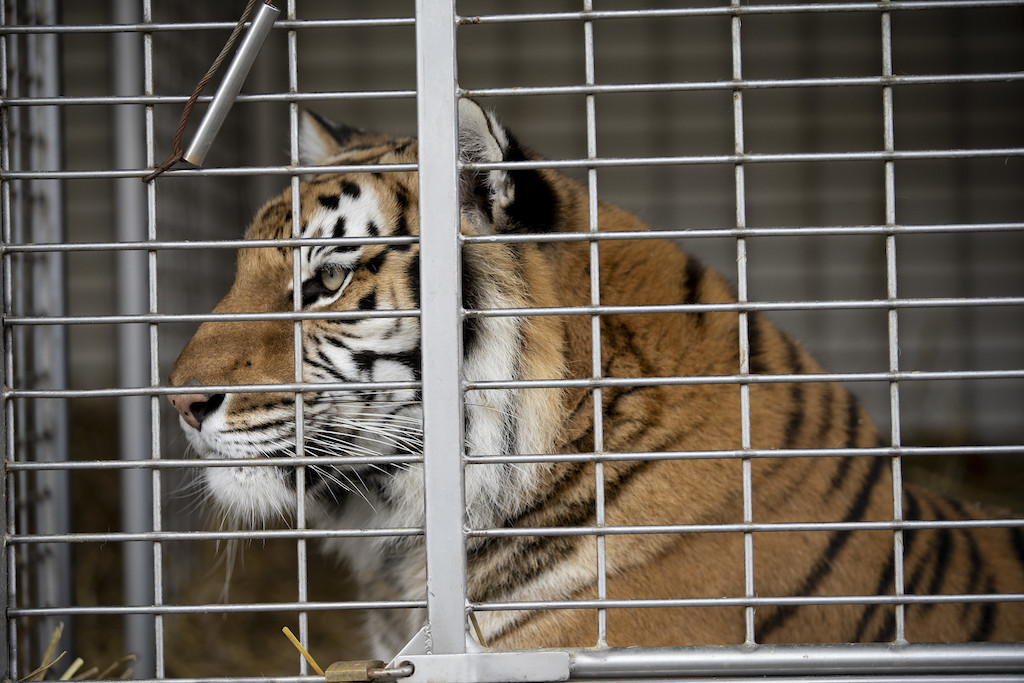 Captive tigers are big business in France. A new law to ban wild animals in circuses could change this – or end up driving the market underground. Guillaume Pajot investigates 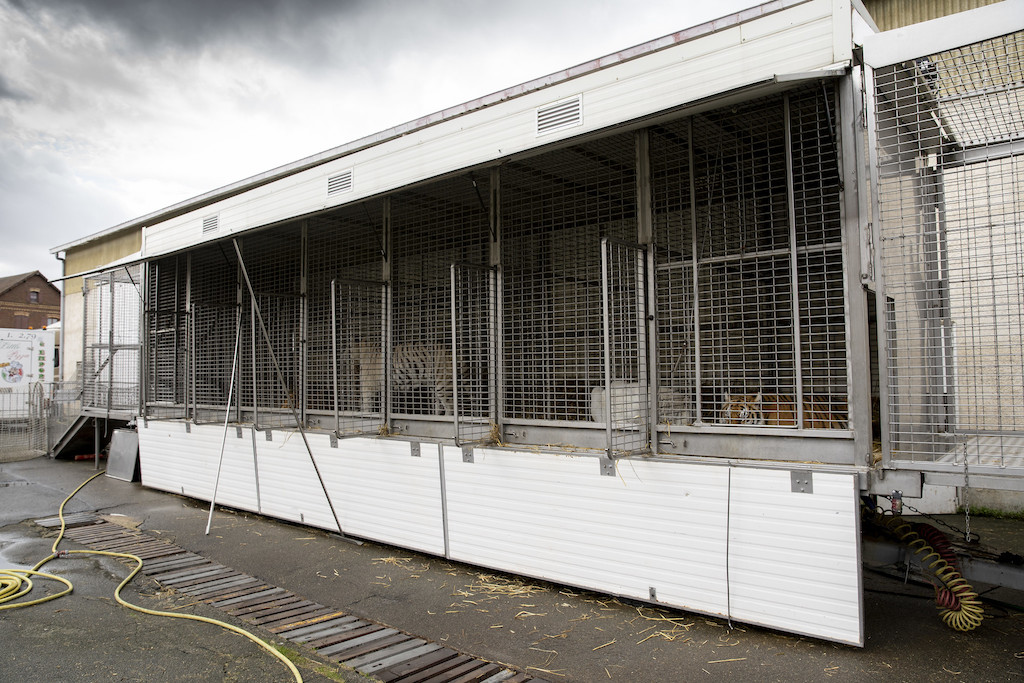 Deplorable conditions: Mario Masson said his tigers had been moved into tiny cages on the back of a truck for no more than eight days. Photo courtesy One Voice

Blacourt is a quiet village in the Oise region of northern France – with about 600 residents, a church and, until last December, 10 tigers that the neighbours used to hear growling in the morning.

The big cats, owned by animal trainer Mario Masson, were housed in a small paved arena discreetly hidden in the courtyard of an unused factory, until they were seized by French law enforcement authorities on December 16 2020 following a complaint of animal abuse by One Voice, a non-governmental organisation.

The NGO denounced the deplorable living conditions of the animals “locked up all year round, except on rare occasions”. The French Office for Biodiversity confirmed the description and led the seizure. An investigation is under way.

It was the first time that such a spectacular seizure, in terms of size and the number of tigers involved, had been registered in France. Contacted by phone, Masson said the felines are his livelihood, and that he uses them for circus entertainment or for filming. He is keen to get them back as soon as possible.

Masson said the tigers had been moved into tiny cages on the back of a truck for no more than eight days: “We comply with legal standards and regular checks have been carried out.” The court will have to decide over the next months.

The Blacourt case is not isolated, as data collated by #WildEye shows. Last year a seizure of six tigers and eight lions took place at an establishment called Caresse de tigre, in Arelaune-en-Seine near Rouen. The place, which presented itself as an animal shelter, was open to the public year-round, even though it did not have the permits to be open more than seven days a year. It was also possible for the public to take selfies with the cubs – €50 for 10 minutes of cuddling.

In 2019 a white tiger was discovered at a man’s residence in Brignoles in south-east France, along with royal pythons and marsupials: the unnamed culprit was sentenced to eight months in jail for a previous fraud, and the cub was taken to the Barben zoo. 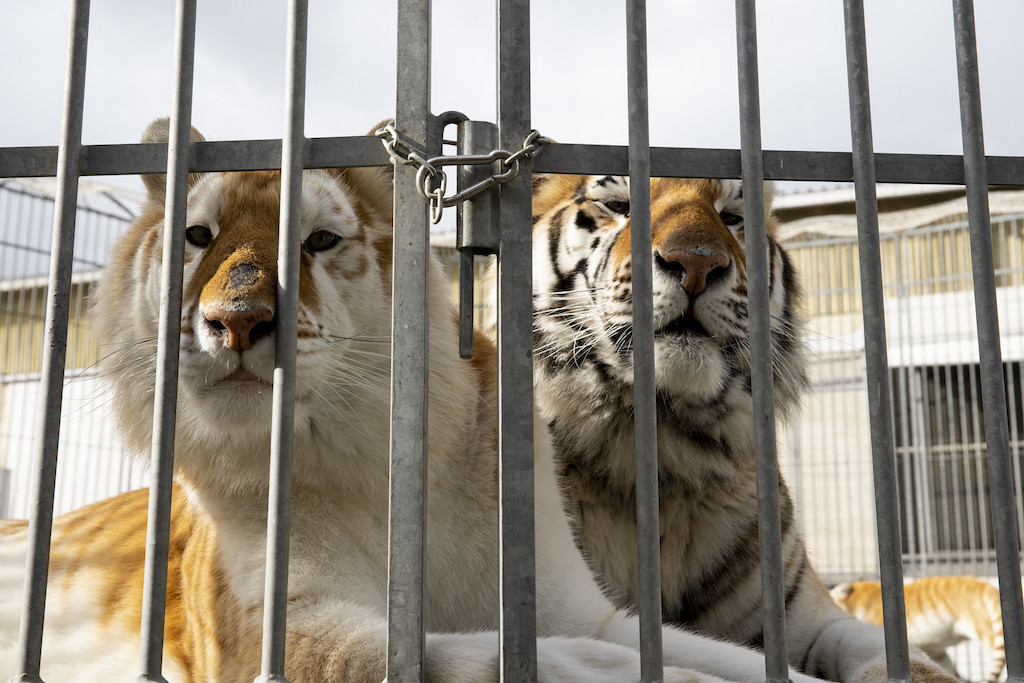 Behind bars: Masson’s tigers were taken to a sanctuary, but he wants them back. Photo courtesy One Voice

Captive tigers are particularly numerous in France. How are they registered ? Since December 31 2018, administrative registration of non-domestic species is mandatory. To do this, a database has been created: the I-FAP file.

The Ministry of Ecology said 635 living tigers were registered on the I-FAP database on December 22 2020, which some organisations consider to be an underestimate. “Many animal trainers don’t register their animals,” said Christophe Coret, head of AVES (A Voice for Endangered Species) France, which investigated the Caresse de tigre establishment.

In France anyone can own a tiger, subject to two legal obligations: obtaining a certificate of competence, which attests to the expertise to ensure care for animals and the maintenance of their living space, and authorisation from local authorities. Without these documents, it is unlawful to possess wild animals and offenders can be punished with one-year imprisonment and a fine of up to €15,000.

Despite these constraints and the existence of the I-FAP file, the sale, purchase and exchange of tigers is difficult to control. France regularly exports and imports tigers, and these sales are regulated by CITES (the Convention on International Trade in Endangered Species).

It is a real “tiger business”, involving trade in the animals all over the world. Sometimes this legal activity also serves as a cover for illegal wildlife trade, which is widespread across the globe.

“Some European tigers are exported to Asia, because the buyers there believe that European big cats are bigger and stronger, which makes them especially valuable for breeding,” said Kieran Harkin, head of wildlife campaigns at the international NGO Four Paws. In China and Vietnam, tigers are sometimes exploited in “tiger farms” and then killed for their bones, teeth and skin.

Tiger trafficking in France is fuelled by a fad around feline babies. On social media, celebrities and the general public pose with baby tigers or lion cubs in their arms and share their photos, making others want to get an animal by all means.

In October 2020, for instance, nine people were taken into custody after a couple from Le Havre spent €6,000 on a three-month-old Sumatran tiger. The arrests were the outcome of a rare two-year investigation.

Dismantling this illegal market requires long and thorough investigation, which is carried out by the Central Office on the Fight against Threats to Environmental and Public Health of the National Gendarmerie of France (OCLAESP) and the French Office for Biodiversity.

“These tigers are probably bred on our territory, where not very scrupulous breeders take care of their reproduction, especially as we know that tigers breed very easily in captivity,” said Colonel Ludovic Ehrhart, second in command of the OCLAESP.

A police source compared the trafficking of big cats to the market for stolen works of art: “It works on demand, à la carte: there is not necessarily stock, but we will find what you are looking for.” 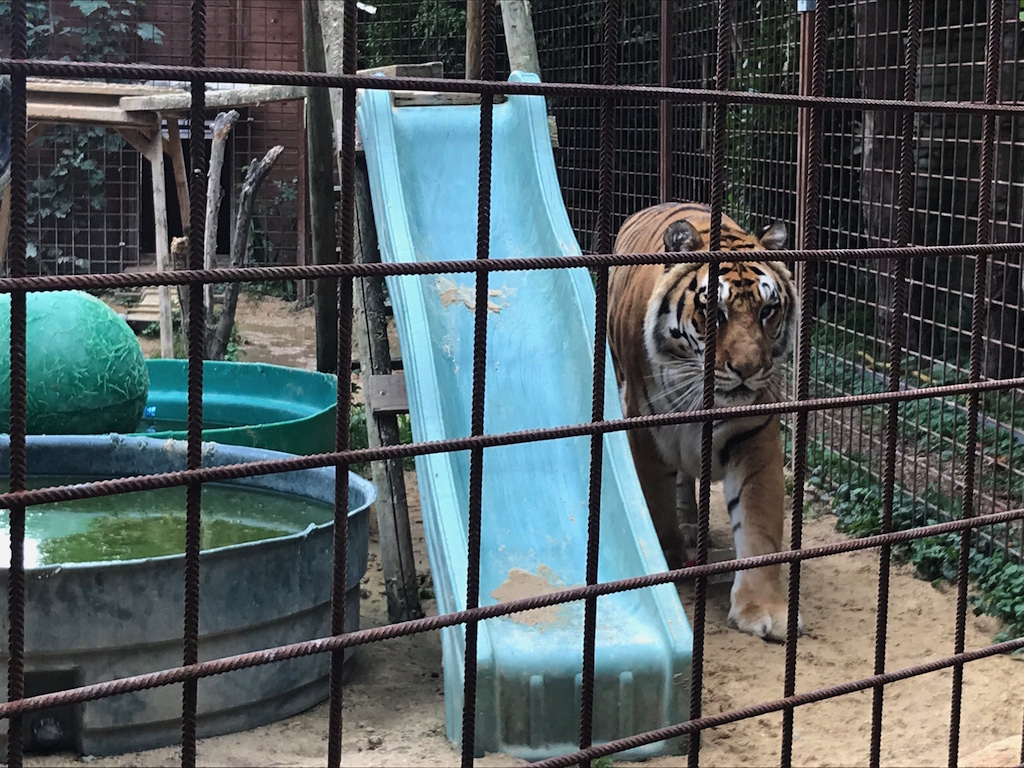 The situation of captive tigers in France could change rapidly. A Bill against animal abuse is to be debated in the Senate, after being widely adopted in the National Assembly.

As soon as the law is promulgated, the purchase and reproduction of non-domestic animals in travelling circuses will be forbidden. Moreover, this law will give circus owners five years to stop using these animals in their shows and to create a different future for them. However, establishments such as zoos will continue to be allowed to have wild animals.

There are an estimated 500 big cats in France’s travelling circuses, according to the union of the owners of circus animals. What will happen to these animals if they no longer have economic value?

France has only a handful of government-recognised shelters that can host big cats: Tonga, La Tanière (Eure-et-Loire) and Le refuge de l’Arche (Mayenne). Their capacity and financial resources are limited.

“The monthly maintenance of a big cat costs between €350 and €400,” said Jean-Christophe Gérard, a veterinarian and vice-president of Tonga.

Wildlife conservation organisations fear that the end of big cats in travelling circuses without proper monitoring could increase trafficking. “Some trainers may take the opportunity to dispose of their big cats illegally, or sell them abroad,” warned Alexandra Morette, president of the NGO Code Animal.

Preparing for the future law, owners of tigers and lions are already starting to work out ways to keep their animals and continue their activity. This is the case of Mario Masson in Blacourt, who is working on a “safari lodge” project, announcing in the regional press that visitors could sleep and have breakfast “10 metres away from the tigers”.

For him it is a possible way to continue the “tiger business” in an alternative form – if he manages to get his animals back.