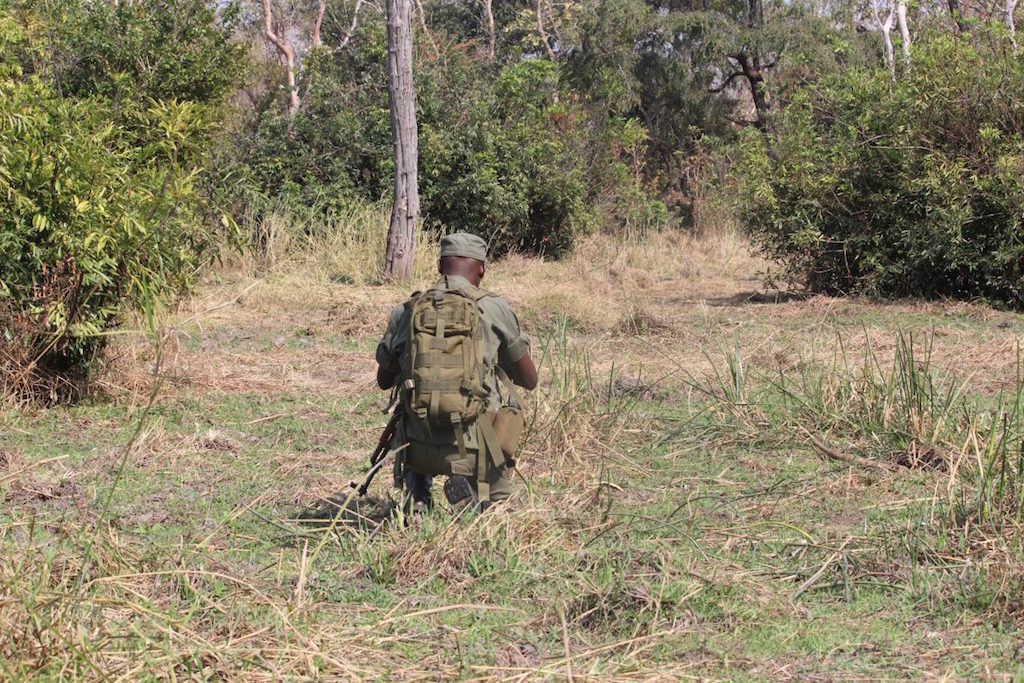 The release of 83 rhino poachers from South African jails last year did not help the uphill battle faced by special prosecutors dealing with environmental crimes in Mozambique, reports Estacio Valoi

Ranger in the field: Inspection activities in Mozambique’s conservation areas had to be stepped up after poachers released by South Africa mostly returned to crime. Photo: Estacio Valoi

For years environmentalists have warned that the biggest threat to the future of rhino populations is the indiscriminate killing of these animals in South Africa’s Kruger National Park by organised syndicates infiltrating from neighbouring Mozambique.

While the kingpins build their mansions on the proceeds of the slaughter of rhinos in the Kruger, home to the biggest population of these endangered animals in the world, young Mozambicans living along the border with the national park leave their families without saying goodbye and, motivated by the pursuit of money, head out on a journey that often means no return.

The situation resulted in finger-pointing between Mozambique’s judiciary, police, parks authorities and environmentalists amid claims that “they release poachers”, and that some cases were not well presented in court.

One outcome was the appointment of special prosecutors in each province in Mozambique who are mandated to deal with environmental cases. The Administração Nacional das Áreas de Conservação (ANAC), a public conservation institute with administrative autonomy, assists these prosecutors in cases of crimes against biodiversity.

ANAC head Carlos Pereira says significant steps have been taken in raising awareness among prosecutors’ offices and setting up specific channels for contacting and assisting prosecutors in the case of environmental crimes, in particular poaching. Seminars and training of prosecutors were carried out, and today there are standard procedures for prosecutors to act in cases involving this type of crime.

“The obstacles are usually the same as always, but it has improved a lot,” he said. “There are flaws in the drafting of the legal documents, which sometimes leads to the annulment of the charges.

“Among the judiciary there is often a lack of knowledge about protected species and about the modus operandi of crimes against biodiversity in general and organised crime in particular, which results in the release of suspects on bail even in cases involving protected species.” 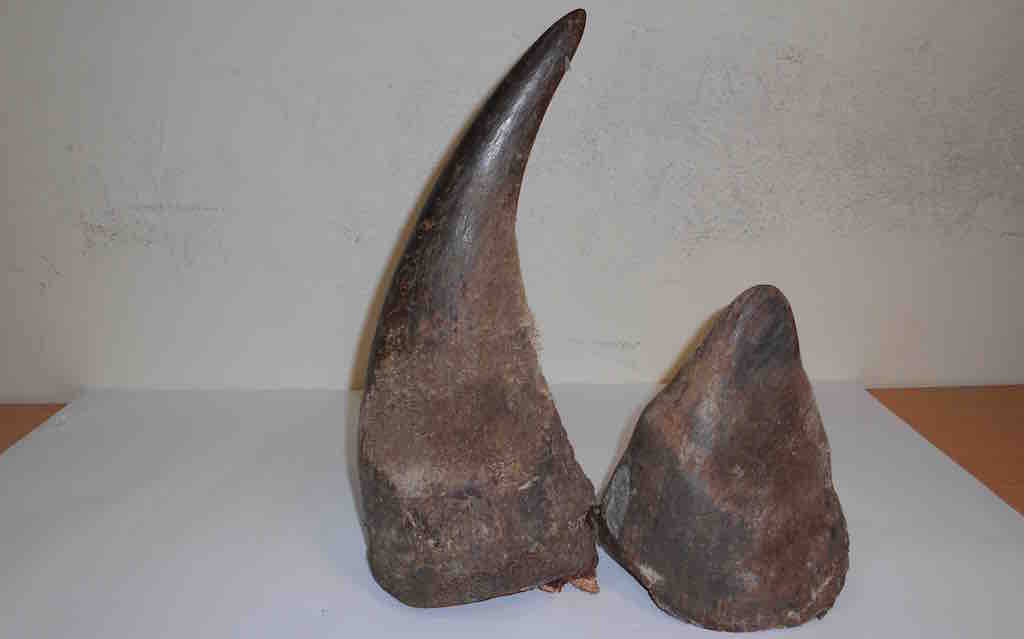 A major setback for anti-poaching efforts in Mozambique was the release of convicted poachers in July 2020 by the South African government in order to relieve congestion in prison facilities during the Covid-19 pandemic, Pereira said.

“Covid-19 did not stop inspection activities that take place normally in the conservation areas,” he said. “The biggest impact in the southern region was the release of 83 rhino poachers who were imprisoned in South Africa and received a presidential pardon.

“These poachers mostly returned to crime by increasing poaching activities in the districts of Magude, Moamba and Massingir, and by incursions into South Africa to kill rhinos,” Pereira said.

The released poachers were part of a group of 183 Mozambican prisoners in South African facilities who were released on July 14 2020 and returned to Mozambique. “They were all prisoners and were returned to freedom by the South African government,” Juca Bata, spokesperson for the provincial directorate of Migration in Maputo, told media at the time.

The prisoners were received at the Ressano Garcia border post, close to the southern section of Kruger National Park, and among other crimes had been detained in South Africa for illegal immigration, drug trafficking, forgery of documents, theft and 83 for poaching.

Final data on cases that went to court in 2020 is not yet available. In 16 cases offenders were sentenced to prison terms ranging from four to 19 years, the ANAC records show.

The Attorney General’s Office (PGR) is setting up an integrated database so that cases can be monitored from arrest to prosecution to trial. Questions sent to PGR spokesperson Emmanuel Zaqueu in early March about this database, and asking whether the introduction of special prosecutors for environmental crimes had improved court processes, remained unanswered at the time of publication.

ANAC assists in the verification of the offences and works with the Mozambican Criminal Investigation Service (SERNIC) in the arrest of suspects who are then prosecuted in court.

“In these cases, our lawyer becomes an assistant to the public prosecutor in accordance with article 63b of law 5/2017 and assists the prosecutor in accusing the suspect. If so desired, the attorney general’s office may request ANAC to participate in the investigation phase, which rarely happens,” said Pereira. 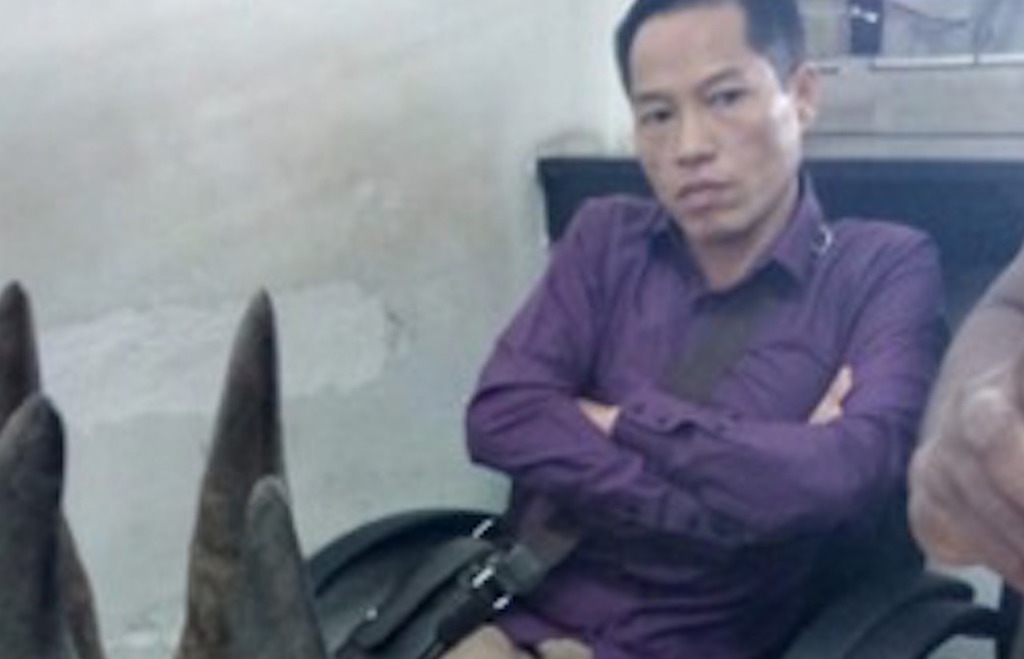 Fugitive from justice: A suspected trafficker of Vietnamese nationality who was arrested with rhino horns at Maputo International Airport. The investigating judge granted him bail and the suspect disappeared. Photo courtesy ANAC

Three main court cases related to wildlife crimes were registered by ANAC in 2020. A suspected trafficker of Vietnamese nationality was arrested with rhino horns at Maputo International Airport, where ANAC made the detection and the authorities of the airport the detention. In this case the investigating judge decided to provide a bond (bail) and the suspect disappeared. After learning of the provisional release of a foreigner without residence, ANAC appealed to the Attorney General’s Office and a new arrest warrant was issued. The suspect remains a fugitive from justice.

The second case was the arrest, in close collaboration with SERNIC, of a Tanzanian poacher who had fled Tanzania where he had been imprisoned for poaching. He was wanted in connection with the slaughter of 26 elephants in the Niassa Reserve in northern Mozambique. He is detained in Lichinga and the Tanzanian authorities have officially requested his repatriation.

The third case involved the suspected possession and trafficking of irradiated tortoises, a protected species, on Ilha de Moçambique. A suspect was arrested by ANAC, working in close collaboration with the prosecutor and SERNIC, and 79 tortoises were confiscated. The case is being processed by the judicial authorities of Nampula province.

To tackle wildlife crime in the the region, Pereira said, ANAC is part of several international and regional forums within the Southern African Development Community. It has bilateral relations with countries in the region, with conservation areas such as Kruger National Park and Gonarezhou National Park in Zimbabwe, and with the authorities who manage the national parks in neighbouring Tanzania.

Pereira referred to a reported instance where seven convicted Chinese poachers fled Zimbabwe in September 2019 with the assistance of a corrupt policeman and escaped via Mozambique (see The perfect rhino crime). He said ANAC had been immediately informed about the escape, but the poachers had vanished.

“It is not the responsibility of ANAC in these cases to pursue and detain fugitives from another country,” he said. “We provided all the information so the police and migration authorities could detain the traffickers, but this was not successful and the fugitives left the country, probably by sea.”