Mission to the Kawe 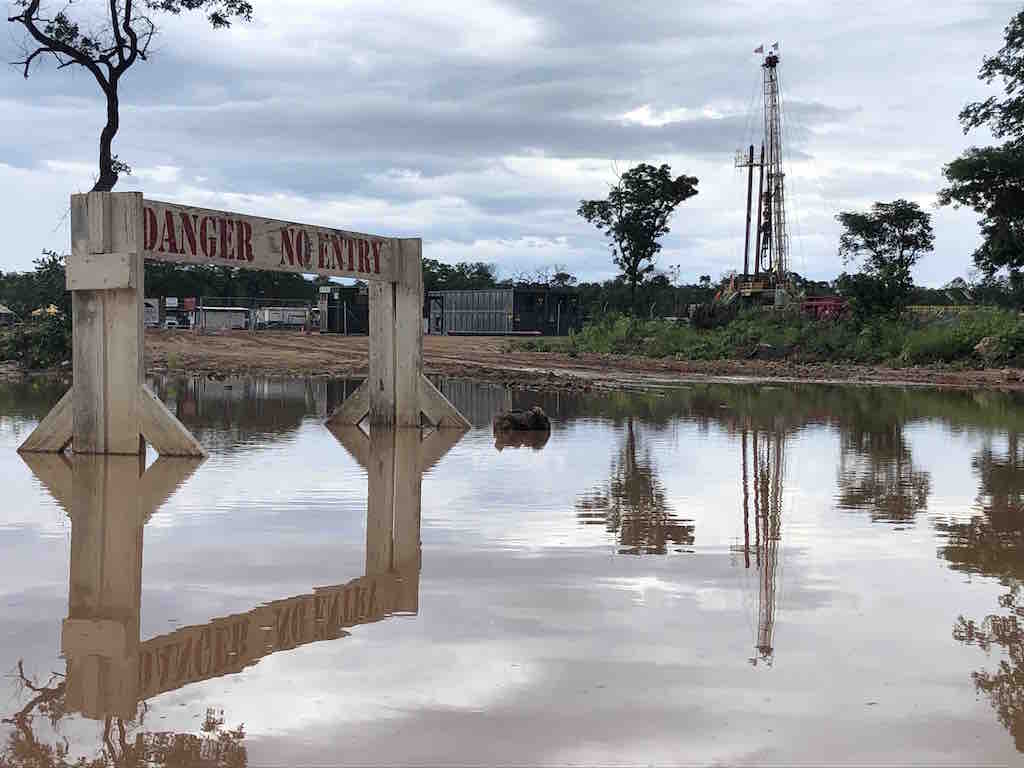 01 Feb Mission to the Kawe

Posted on 1 Feb, 2021 by Oxpeckers Reporters

Entrance to the ReconAfrica site at Kawe. Photos: John Grobler

Canadian oil and gas company Reconnaissance-Africa (ReconAfrica) on Friday sought to downplay the risks its exploration programme in Namibia posed to the ecologically sensitive tributary of the Kavango River, saying their mud-based drilling method was no threat to the aquifer and insisting their three drill sites on communal land were all legally occupied.

“The [waste] water is so safe you can drink it if it was not so muddy,” said the company’s Cuban deputy general manager, Yuri Perez Martinez, during an interview with him and and his co-director, Raydel Toirac Proenza, about their drilling programme in Kawe.

They were reacting to evidence presented to them that the waste pond was not lined with a non-permeable membrane to prevent leakage of chemicals used in the drilling process from leaking into the groundwater.

It was a joke, Martinez hastened to add – but it is one that has potentially major local and regional environmental implications.

Kawe is located about 40km due south of the Kavango river and on the western bank of the Omatako-Omuramba, an ephemeral river system that once flowed from central Namibia into the Kavango river 70km east of Rundu at Ndonga Linena. As such, it is part of the larger Okavango Delta ecosystem. 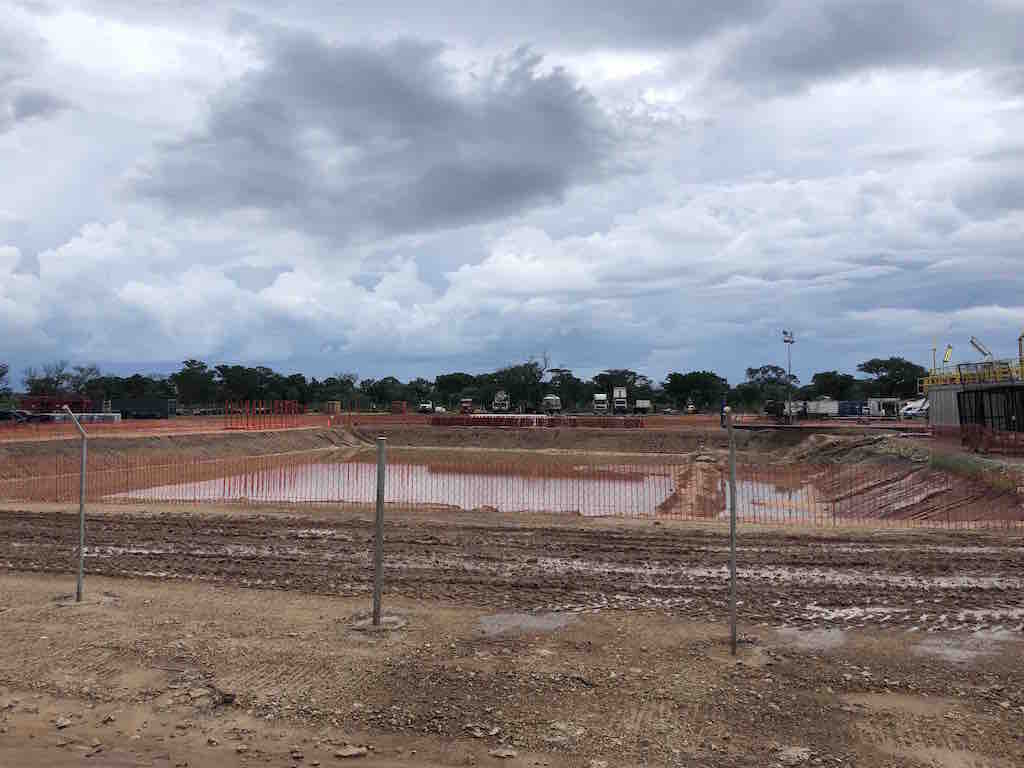 Several visits to Kawe drill site last week showed that drilling, which started on January 11 and which Martinez confirmed had reached a depth of 300 metres, had been paused.

Plans for three more community water boreholes, to be drilled by a local sub-contractor, were also postponed on the apparent instructions of ReconAfrica’s head office, it was established.

“Yes, they were granted ECC [environmental clearance certificate] for the drilling at Kawe, other [two] sites which are not yet started and not sure at this stage if they will be started,” Mufeti said by WhatsApp.

The Canadian junior oil and gas company so far has avoided discussing the potential impact and risk to the aquifer which all local residents and farmers depend on for water, sourced from boreholes or shallow wells in the porous, sandy substructure.

Instead, ReconAfrica has confined debate to its current seismic testing programme over 450km during public meetings held in the regional capital, Rundu.

Presentations by its environmental consultant, Sandile Mwiya, did not mention the potential risks of boreholes and the local clay-built houses collapsing if such seismic testing was done in close proximity.

Mwiya repeatedly said that questions over ReconAfrica’s proposed fracking plan were premature at this stage. They were only looking, not drilling, he stressed in response to questions from the audience. 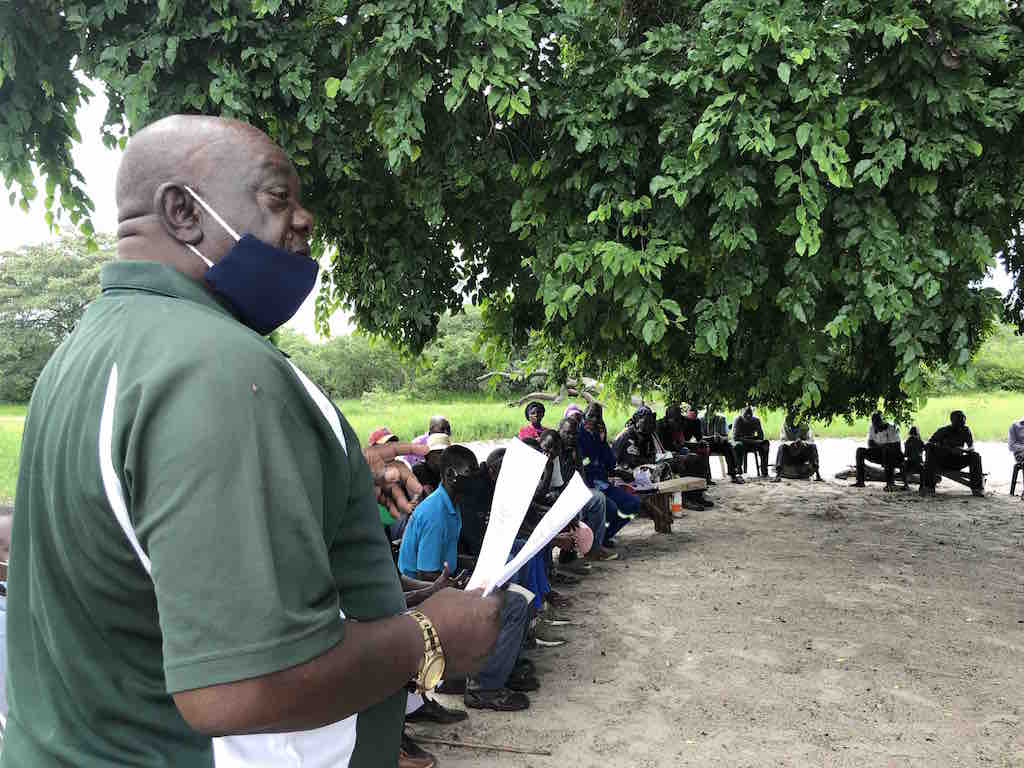 Former MP Alois Gende, appointed as ReconAfrica’s community coordinator, informed the Mbambi community that the meeting with his employers had been postponed

The impact on wildlife would be minimal because there were no elephants within the area of the seismic testing, Mwiya said, a fact disputed by the Kapinga Kamwalye Conservancy.

This assertion was undermined by the fact that the Ministry of Environment, Forestry and Tourism had issued a controversial tender in December 2020 for the capture and removal of 90 elephants from Kavango East – as part of a group of 170 animals to be sold.

The seismic testing – conducted by slamming a hydraulic hammer into an aluminium dome to generate shockwaves of 300mHz into the ground – would not bother the elephants, Mwiya said. Elephants’ feet-based, long-range communication was conducted at 24mHz and only occurred at night when ReconAfrica would not be working, he said.

“They did not answer anything,” said Adolf Moremi, chairperson of the Kavango East Farmers’ Union, afterwards. Even the Okavango Land Board was not approached by ReconAfrica about their plans, confirmed the current chair of the board. 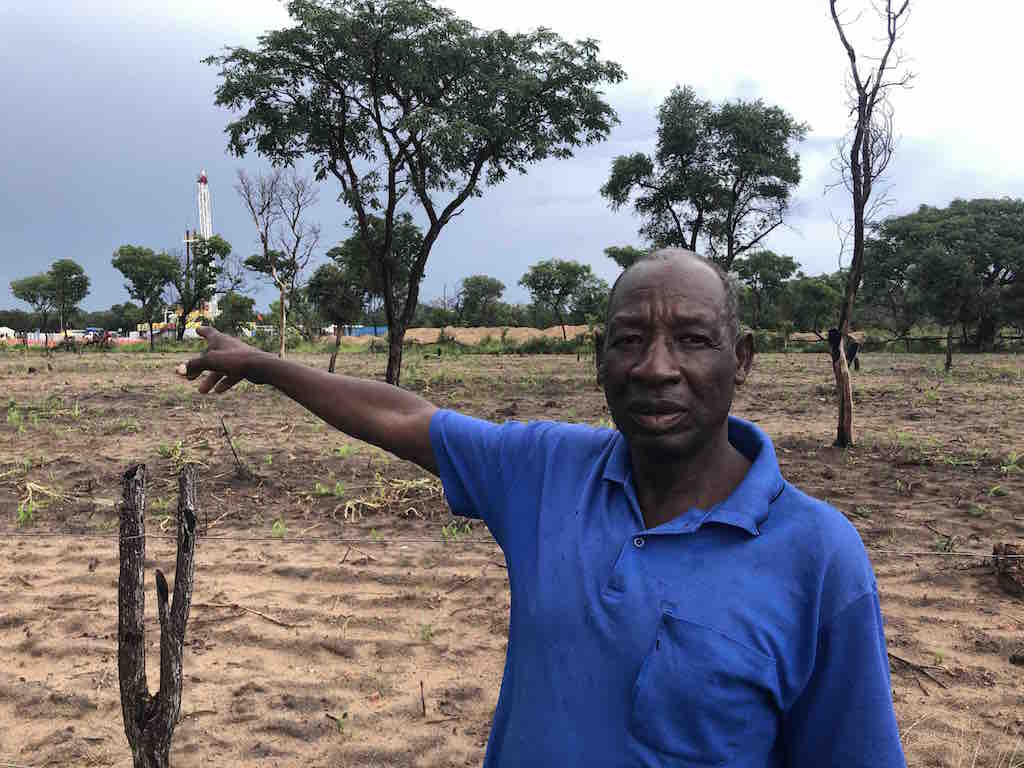 Andreas Hawano in front of his sorghum fields, one part of which was occupied by ReconAfrica without prior warning or notification

Back in Windhoek, Martinez said the company had followed every legal and traditional protocol in occupying communal land for their exploratory drill sites, which were located at places where they think the Kavango sedimentary basin is at its deepest.

At Kawe and at Mbambi, ReconAfrica had occupied land that was previously allocated to local people, a visit to the area established.

Andreas Hawano, a retired heavy-machine operator, said he had moved to Kawe seven years ago with his livestock on land allocated to him by the local headman Daniel Haufiku, which Haufiku confirmed was the case.

In early November last year, he said, sub-contractors hired by ReconAfrica arrived in Kawe and informed him that they were allocated a piece of land right inside his mahangu (sorghum) gardens and adjacent to his homestead.

“They said they found something – I do not know what, petrol or diesel – and they are going to drill here,” Hawano said in an interview at his homestead in the shadow of the towering ReconAfrica drill rig.

He feared he would be ordered to relocate somewhere else but hoped he would be compensated. “If we have to leave, what are we going to do? Our children are going to school hungry. You know yourself how it is,” he said.

Promises of local employment had proved empty, said his unemployed 25-year-old son Mawano. Although ReconAfrica currently employed 17 local people and hired six casual workers on a weekly basis, he has not been able to land even a part-time job.

“The problem is that their security chase you away [from the site’s gate], telling you there is no work. There is no chance to speak to Johannes Kangoro, the foreman,” he said.

Efforts by the local communities to get answers from ReconAfrica stalled after the company repeatedly postponed scheduled meetings at Mbambi, Nçamagoro and Nçaute during the past week.

At Mbambi Village, headwoman Eveline Ngila and about 100 of her people waited for three hours for the meeting ReconAfrica had pre-arranged and advertised in the state newspaper before the company’s appointed community coordinator, Alois Gende, arrived to tell them the meeting was off.

While waiting for ReconAfrica, Ngila said the meeting was called to hear ReconAfrica’s side in a land dispute lodged by a local family over what they claim was ancestral land allocated to them but now occupied by the company’s second drill site.

Gende, a former member of parliament, said the meeting was cancelled because of a dispute over the use of a gravel quarry at nearby Mbambi Mabure for material for the drill site. 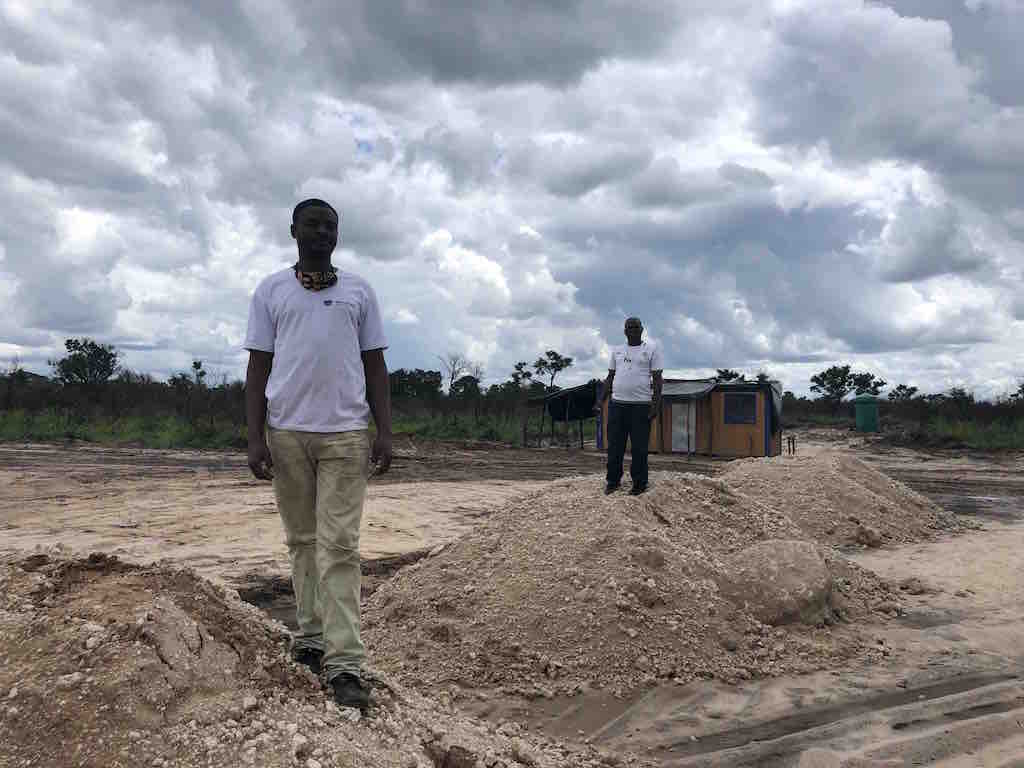 Andreas Kawana (front) and Andreas Sinonge looking at what used to be their family’s mahangu (sorghum) field outside Mbambi, where ReconAfrica’s second site is to be drilled

Andreas Sinonga, a teacher and spokesperson for the Kalenga-Mwabenga families, attended the earlier public meeting in Rundu to raise objections to having communal land used as a drill site at Mwiya.

However, the authority to allocate communal land to a private company was questioned under both customary law and the Communal Land Reform Act on both legal and procedural grounds.

The ReconAfrica agreement handing their land to the company was signed by the current acting Sambyu chief, Fumu Sophia Mudjembwe, according to Andreas Sinonga. But was this legal?

Under formal local governance law, the government has the right – in consultation with the governor – to recognise or reject any local traditional leader, who then is put on the state payroll.

But the Ministry of Local and Regional Government has since 2018 failed to recognise and appoint a successor to the late Sambyu fumu Mutembe Rubebe, who died two weeks before she was to marry Alois Gende, it was established.

Similarly, the Okavango Governor Bonny Wakudumo and the regional governance ministry had also been dragging their feet for two years in recognising a new Gçiriuku “king” or Fumu, who is always selected from the matrilineal lineage according Kavango culture.

A decision to over-rule existing ancestral land rights would have to be taken by a full Sambyu council meeting of all traditional leaders. Sophia Mudjembwe, in her acting capacity, did not have such authority, said Emma Mungunda Walker of the Mbukushu line of traditional chiefs.

Secondly, the Communal Land Reform Act of 2002’s Article 36 only makes provision for the expropriation of communal land for the purpose of official government projects, or for the construction of schools, hospitals and clinics, churches, non-governmental and community projects.

On the same Friday as ReconAfrica’s Rundu meetings, a copy of the Ancestral Land Commission that had been collecting dust in the President’s office since July 2019 was leaked to local media.

Among others, the 780-page report made it clear that all land in Namibia has been allocated – which could spell financial and political trouble for ReconAfrica in the Okavango region if it has to pay thousands of people to leave their land. While the company maintains the area is relatively unpopulated, there are more than 4,000 voters registered in the Kawe district and twice as many in the Nçaute area.

“They think this bush is all empty, but there are people everywhere,” said Andreas Sinonga.

John Grobler is an Oxpeckers associate based in Namibia