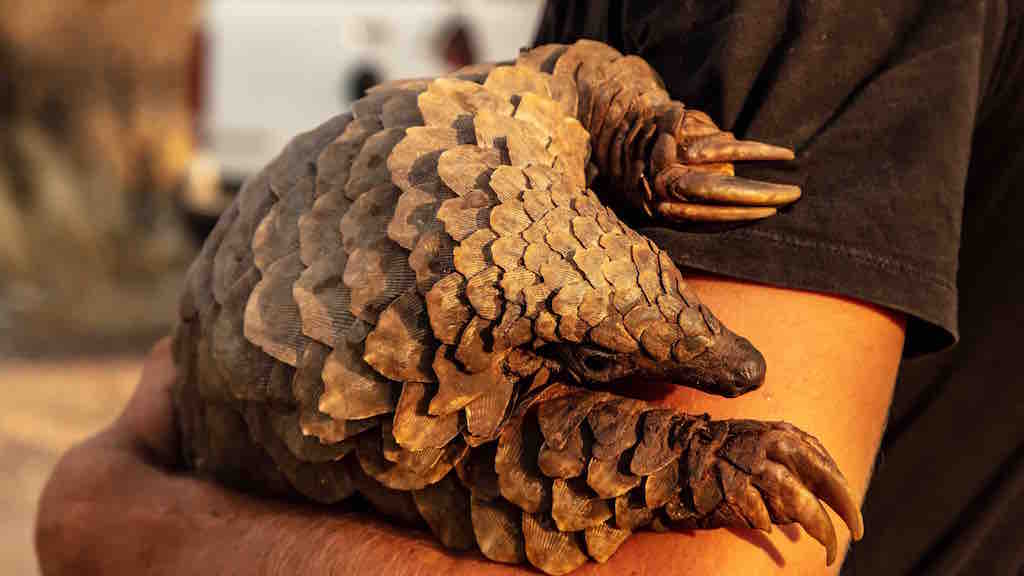 Posted on 2 Jul, 2020 by Oxpeckers Reporters

New #WildEye data reveals that Eastern Europe is an important region for wildlife traffickers. And it seems likely that many crimes go unnoticed and unpunished, writes Marius Daea

Under siege: Pangolins and their scales are now the world’s most trafficked wildlife products. Photo: Piqsels.com / Public domain

Turkish authorities at Istanbul International Airport made an intriguing discovery in November 2019 when they inspected a shipment labelled as furniture, on its way from the Democratic Republic of the Congo to Romania.

Instead of wooden tables or chairs, they found 1.2 tons of scales stripped from poached pangolins, highly endangered mammals that look a bit like armadillos. A shipment of this size would be worth three million euros in China, where the scales are used in traditional medicine. So why was it heading to Romania?

Eastern Europe’s role in global illegal wildlife trade has received little attention. This is in part because of perceptions that trafficking is more of a problem in Western Europe, where many big seizures have been made. But there are also concerns among conservationists that smugglers are avoiding scrutiny by moving wildlife products through Eastern European countries with less stringent law enforcement. 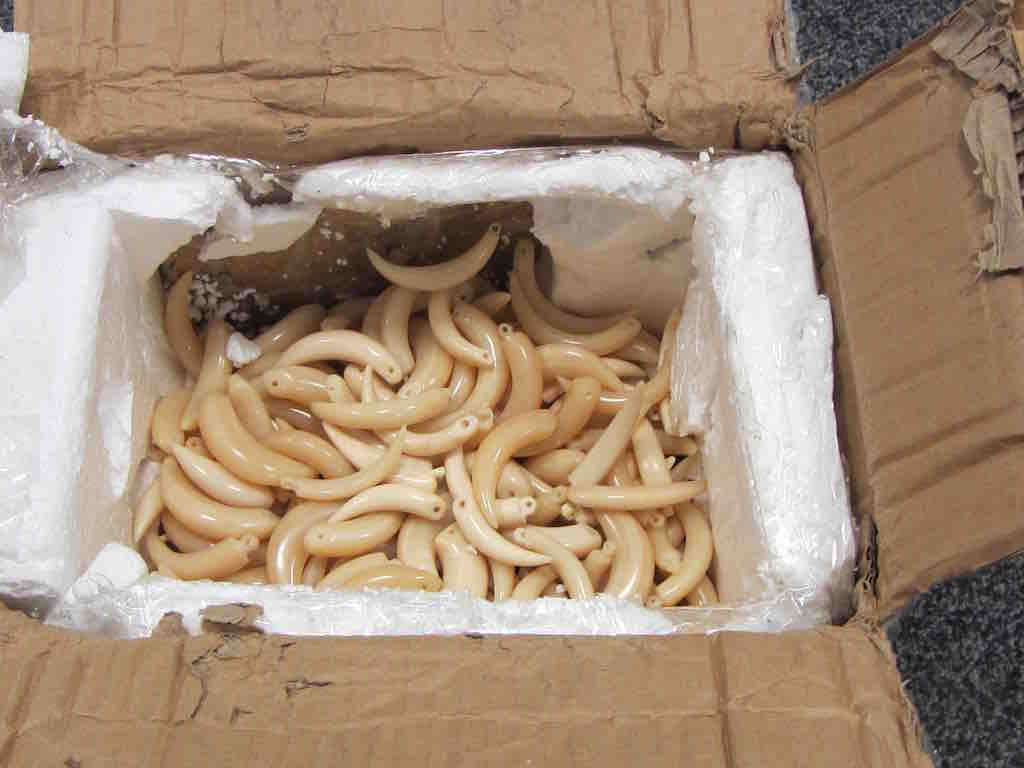 The latest data on the platform, to which I have been contributing, reveals that Eastern Europe is an important region for wildlife traffickers. And it seems likely that many crimes go unnoticed and unpunished.

One of the main tools for regulating wildlife trade is the Convention on International Trade in Endangered Species (CITES), which bans all trade in certain endangered species and heavily restricts trade in others. Most countries are party to the treaty.

Each year EU member states report their CITES-related seizures to a central database. An analysis of the 2018 data, published by the European Commission, revealed that authorities in the EU had seized CITES-listed species more than 6,000 times that year. The smuggled goods they seized included 2,825 pieces of elephant ivory weighing a combined 145kg, as well as 1,135 live birds; 2,311 live reptiles; and thousands of other items derived from wildlife.

The report showed that Europe is indeed a major market, transit hub and source region for illegal wildlife products. But 79% of the seizures were made by just five countries in Western Europe — France, Germany, the United Kingdom, Spain and the Netherlands. While France had the largest number of seizures (1,256), countries in Eastern Europe made hardly any. Slovenia reported nine and Slovakia eight. Bulgaria reported five, and Romania just two. 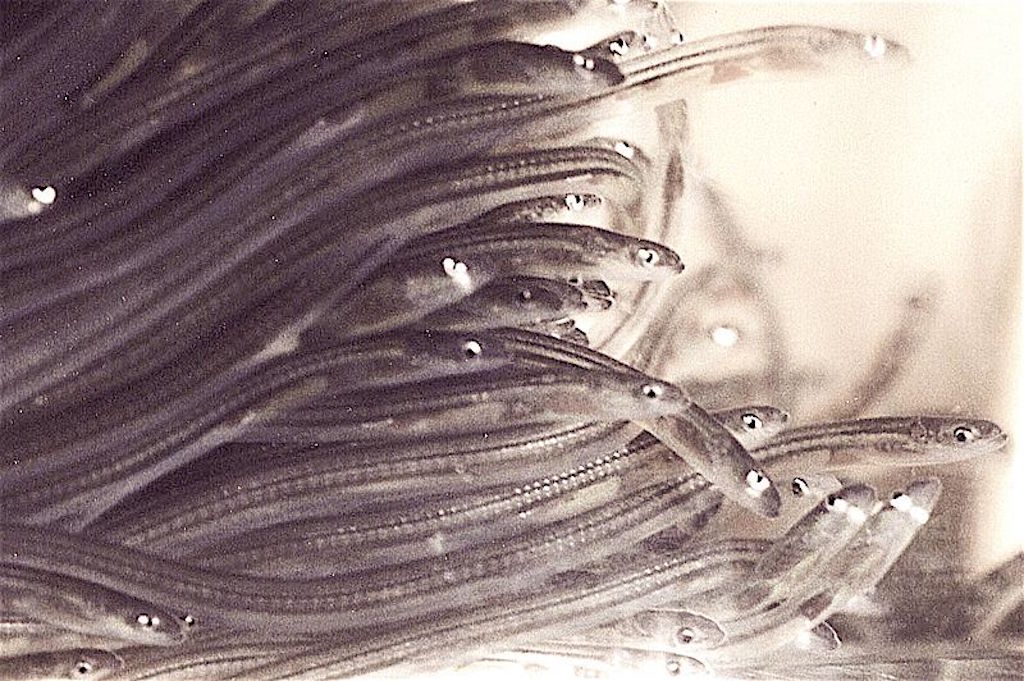 Black market: Each year large numbers of critically endangered glass eels are smuggled from Europe to Asia. The illegal trade is worth millions of euros. Photo: Uwe Kils / Creative Commons

There are various possible reasons for the East-West differences. Western Europe has more economic and cultural ties with Africa, the source of most CITES-listed products. It also has many more large airports and seaports with direct links to Africa. Western Europe also has a larger population of people with Asian heritage, some of whom create demand for CITES products, such as medicine made with rhino horns.

But it is also possible that the uneven distribution of seizures reflects more active enforcement in Western European countries, and that many cases of illegal wildlife trafficking in Eastern Europe are simply going undetected.

The new #WildEye data certainly suggests this. It reveals that very high-value wildlife and wildlife products are travelling through Eastern Europe on their way to more lucrative markets. That shipment of Congolese pangolins bound for Romania was, for example, likely meant to be sent onward to Asia. 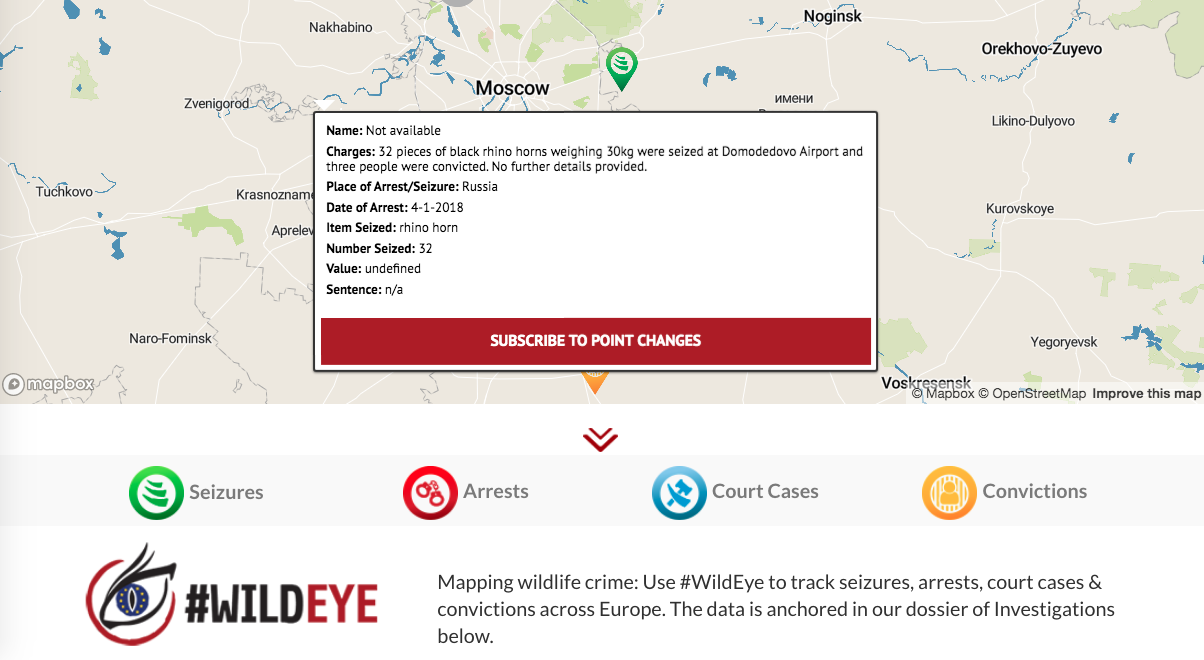 On the map: More than 100 cases in eight Eastern European countries are now tracked by #WildEye

Seizures made by customs officers in other countries confirm that Romania is a source of illegal wildlife products. At the end of 2018 officials in Thailand found 700 kg of critically-endangered European glass eels that had been shipped illegally from Romania on a commercial flight. The eels had a black-market value of more than one million euros. Yet nobody in Romania has been charged or arrested in connection with this crime, and the Romanian Border Police have made no public comment on the case.

In another case, in 2017, a group of Italian men managed to smuggle 1,119 songbirds they had hunted illegally in Romania on to a flight back to their country. They packed the birds along with ice packs to preserve their meat for the market. The smugglers were caught when Italian authorities at Orio al Serio airport searched their luggage.

These cases show that Romania is both a source of illegal wildlife products and a conduit for goods trafficked from other source countries to lucrative markets in Asia. But from my interactions with the Romanian Border Police and other authorities in Romania, it appears that they unprepared, overwhelmed, or indifferent to the situation.

In 2018, for example, Romania was the only EU member state to miss the deadline for reporting its confiscations to the EU’s central database. When Romania did submit a late report, it mentioned just two cases — the confiscation of two deer trophies by customs in Cluj-Napoca, and the Congolese pangolins seized in Turkey on their way to Romania.

Cristina Muntean of WWF-Romania says officials need more training to help them detect wildlife crimes, in part because plant and animal parts are not always easy to identify. “CITES courses are of course needed, but not insignificant are collaborations with specialists to identify species, and more severe penalties for those who deal with this type of traffic,” she said. 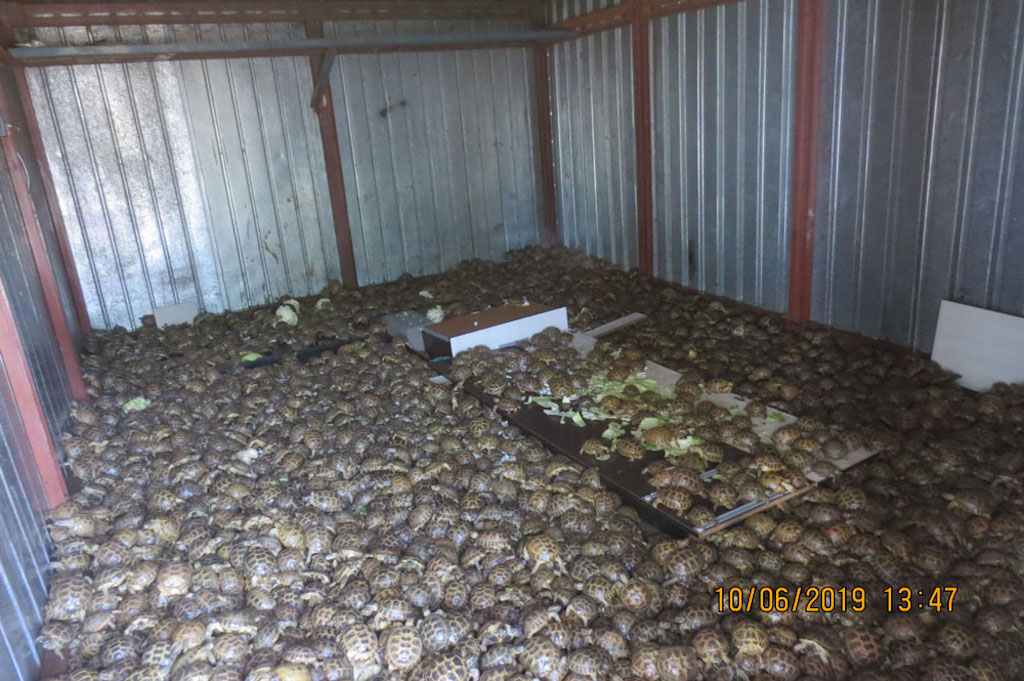 The new #WildEye data shows that other Eastern European countries are also significant sources, markets or smuggling routes for illegal wildlife products. One trafficking hotspot the data reveals is the border between Ukraine and Poland.

In 2018 and 2019 there were 91 incidents (mostly confiscations, but also a few arrests) involving both these countries. The many species seized included live tigers, elephant ivory, caviar, tarantulas and live snakes, parrots and corals. The vast majority of products were coming from Ukraine and were detected by Polish authorities across the border in Rzeszów.

Moving further east, Russia also features prominently in the new data. A few examples highlight the nature of the problem:

These cases are some of more than 100 — in eight Eastern European countries — that are now mapped and tracked by #WildEye. Together, these cases and the stories behind them paint a bleak picture of widespread trafficking, limited law enforcement, weak penalties and just few convictions.

Based on what we know about how the illegal wildlife trade operates, it is likely that many of these cases were linked to organised crime and that some may have even been facilitated by corrupt officials.

But these cases are just the tip of the iceberg. According to Interpol, only 10% to 15% of illicit wildlife products transiting through all of Europe are seized. So, it is possible that somewhere in Eastern Europe tonight there is another shipping container hiding pangolin scales, another suitcase full of eels waiting to fly East, and another caged tiger being driven down a dark road to oblivion.

This story was first published in Romanian by Newsweek Romania here and in English here. It was produced with support from the Internews Earth Journalism Network’s Investigating Wildlife Trafficking project.