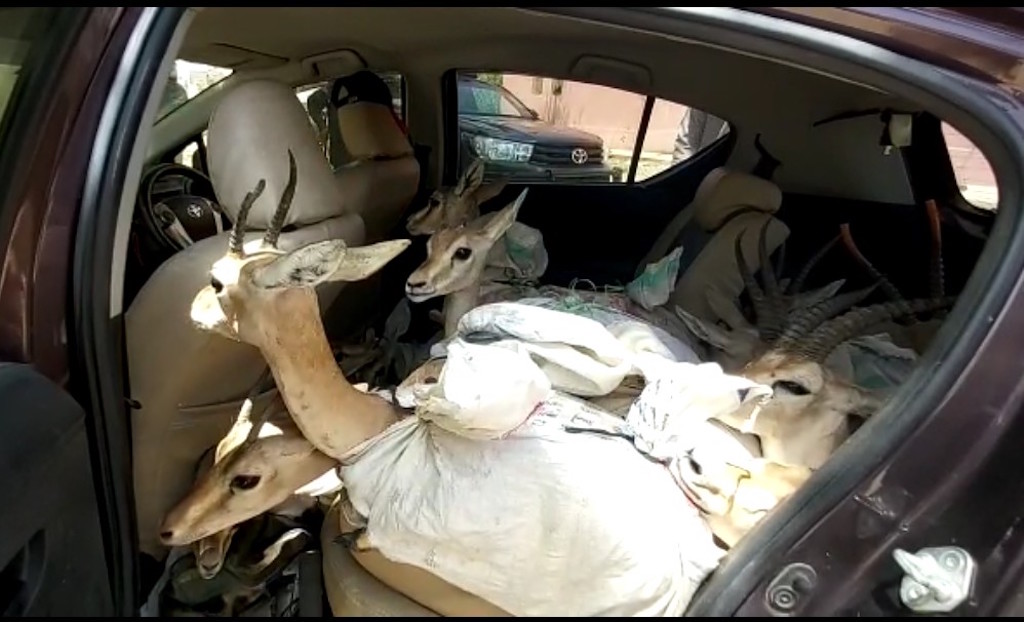 Posted on 8 Jun, 2020 by Oxpeckers Reporters

Authorities say loss of livelihoods and diverted attention has led to a surge in illegal activities in India, Pakistan and Nepal

As countries in South Asia went into lockdown to curb the spread of coronavirus, criminals in the illegal wildlife trade took advantage. With authorities focused on enforcing lockdown restrictions, poachers felt less likely to be caught.

Authorities in India, Pakistan and Nepal said as a result there was a surge in illegal hunting, including of endangered animals and rare birds. To make matters worse, the economic consequences of the Covid-19 lockdown also saw people who had lost their livelihoods turn to poaching to support themselves.

While these countries have battled illegal wildlife trade for many years, the recent lockdown has shown that the black markets are well entrenched. Security personnel in India recovered a huge cache of arms and ammunition from three poachers arrested in connection with the poaching of a rhino in Kaziranga. Photo courtesy India Today

As India went into lockdown, there was a spike in poaching registered in many parts of the subcontinent – from wild birds in cages, to animals caught for bushmeat, to prized commodities in the international illegal poaching trade.

In Odisha, four men were apprehended on May 10 with a leopard skin in Simlipal tiger reserve. On the same day, officials found a rhino killed by poachers in Kaziranga National Park and tiger reserve in the northeast state of Assam.

In early June security forces arrested three poachers with a huge cache of arms and ammunition from Assam’s Karbi Anglong district for their alleged involvement in the poaching of the rhino in Kaziranga National Park. Conservationists said the Indian rhino population will not survive without constant vigilance, because its horn is highly valued in illicit trade.

A sharp rise in poaching has come to light in Rajasthan, including several cases of the endangered chinkara, a desert antelope that has been pushed back from a larger range and is now predominantly found in Rajasthan.

Sumit Dookia, who studies desert ecology and works on community conservation, said this may just be the tip of the iceberg. “From our estimates, at least 55 cases of poaching were reported [in Western Rajasthan]. The animals poached include chinkara, black buck, spiny-tailed lizard, desert hare, peafowl, monitor lizards and grey francolin,” he said.

In Karnataka’s Bandipur tiger reserve, a poaching ring was discovered – 50kg of chital deer meat was seized and nine people were arrested. This was among a string of poaching incidents. Some of the accused used to work in the forest department in temporary jobs.

Trafficking triples in parts of Pakistan

In the northern region of Khyber Pakhtunkhwa, the lockdown period from March 22 to May 12 saw a spike in incidents of hunting and poaching.

“From March 20 to April 30, we made a record registration of 600 cases of illegal hunting and poaching,” said Muhammad Niaz, the divisional wildlife officer in Khyber Pakhtunkhwa’s wildlife department. In regular months, he said, the total cases are between 150 and 200.

Most of the cases involved the smuggling of captured birds and animals to supply markets in the major cities, some of which were open to allow essential items.

The biggest case was the smuggling of 65 demoiselle cranes on March 24 from D.I. Khan city to Peshawar. The cranes were found tied up with their heads covered with cloth in an ambulance, whose operators pretended they were shifting a body, Malook said.

Sharifuddin, the chief conservator of forests and wildlife of Balochistan province, said smuggling cases had increased in KP because the province is a key resting point for migratory birds flying back to Siberia from India along the Indus Flyway. 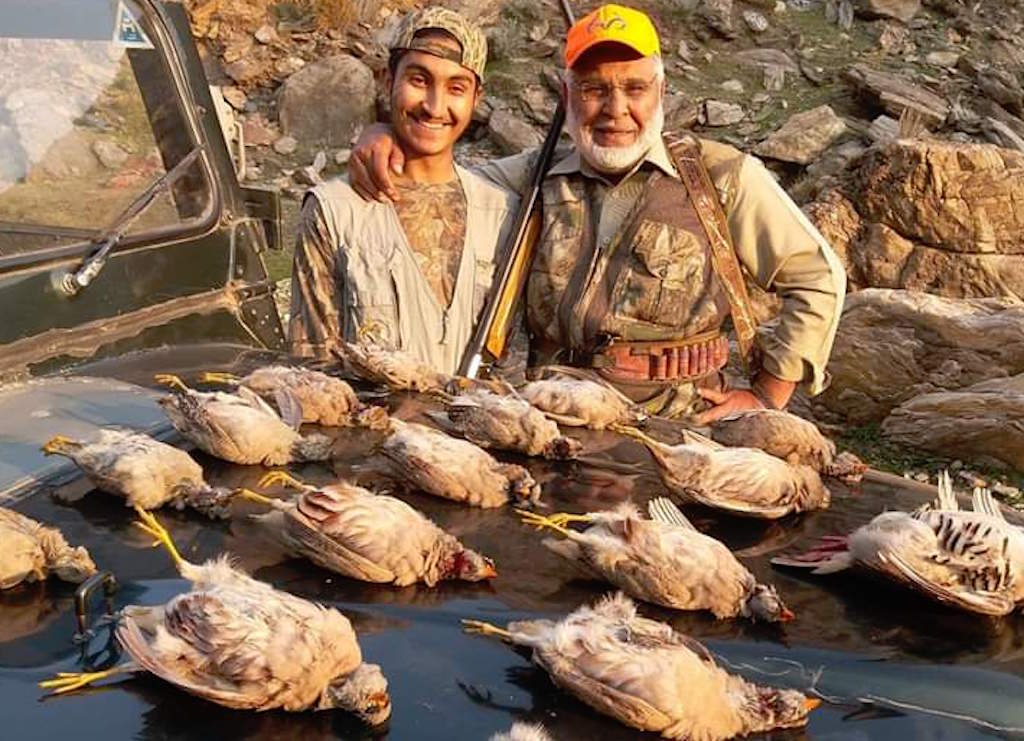 Ground bird hunter Ghulam Mustafa was apprehended after he uploaded pictures of an illegal hunt in Khyber Pakhtunkhwa, Pakistan, on social media. His license was cancelled and he was charged in court. Photo courtesy Pakisan Wildlife Foundation/Facebook

Poaching is a lucrative business and people have taken advantage of the lack of activity at the wildlife department during the corona lockdown period, said Muhammad Sohaib, a bird seller in Peshawar, capital city of Khyber Pakhtunkhwa. Sohaib admitted there had been an increase in the supply of birds by poachers during this time.

There is big money in hunting birds. Poachers selling cranes and other rare species can easily earn hundreds of thousands of rupees on a monthly basis.

Wildlife officials believe there has been a surge in the clandestine wildlife trade because people have had to look for other sources of income, including poaching, during the lockdown, which put a stop to commercial activity. Not only professional poachers, but ordinary people have moved into the illegal trade as authorities have been distracted. 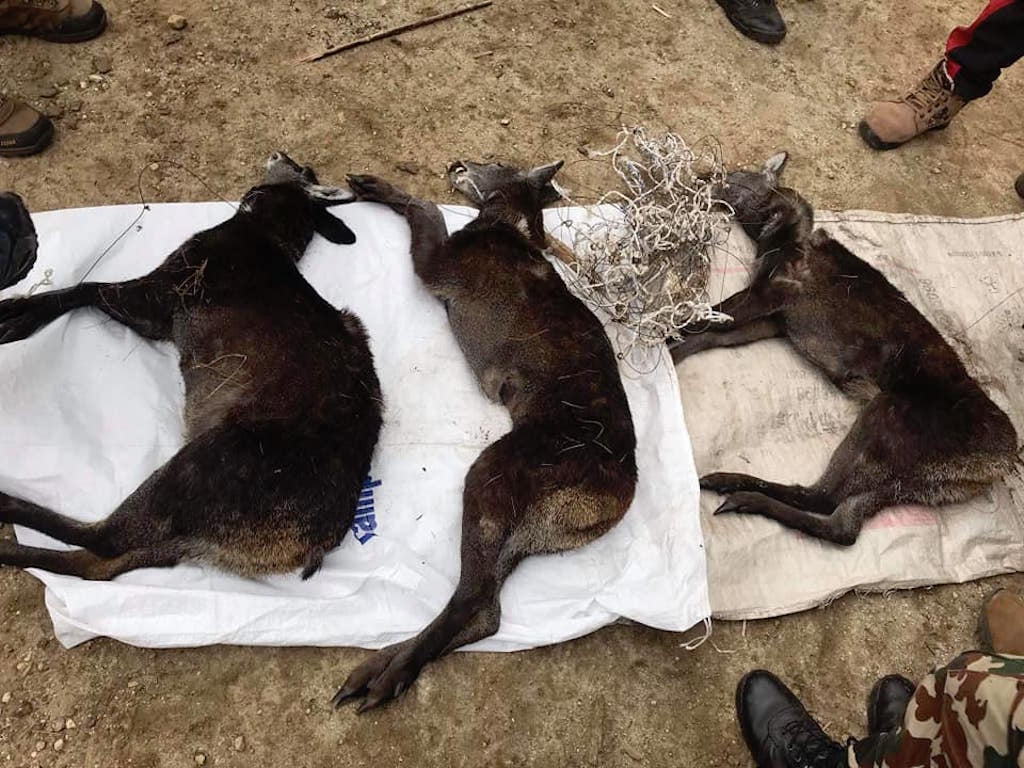 On April 25 the bodies of six musk deer were found inside Sagarmatha National Park, below Mount Everest. Five alleged poachers were taken into custody, according to Nepali Times. Photo courtesy Dawa Nuru Sherpa/Facebook

In Nepal, major incidents involving endangered species have raised suspicions about an increase in poaching as the country went into lockdown.

Officials said a host of issues such as loss of livelihoods, restrictions on movement and a lull in tourism may have encouraged poachers to take advantage of the situation.

On April 25 the bodies of six musk deer were found inside Sagarmatha National Park, below Mount Everest, a month after the Covid-19 lockdown was imposed. Park officials say it was “one of the worst cases of poaching” in recent years.

“When we reached the site where the bodies were found, we saw that the deer were trapped and killed. The pod on one male deer had been removed,” said Bhumiraj Upadhyaya, chief conservation officer at Sagarmatha National Park.

The Himalayan musk deer, more commonly known as Kasturi in South Asia, is one of the most endangered species in the region. Scent glands from male musk deer can fetch thousands of rupees, and are used to make perfume and traditional medicine.

Dawa Nuru Sherpa, a resident of Khumbu on the foothills of Everest, wrote on his Facebook page that a dead golden eagle was also found inside a trap in the same area. More wire traps were also found.

Another incident in southern Nepal’s Parsa National Park saw poachers exchange fire with patrolling soldiers. One soldier was hit, while a poacher died on the spot, said Bishnu Shrestha, information officer at the Department of National Parks and Wildlife Conservation. Officials managed to arrest one of the poachers, who worked as a painter in Kathmandu and had returned home after the lockdown because of a lack of work, said Amir Maharjan, the park’s chief conservation officer.

Conservation officials have stepped up security efforts in the wake of these incidents. “All our offices have opened even as the government has not listed us under essential services,” Shrestha said.

Most of Nepal’s national parks see an influx of tourists during spring season. But the protected areas are currently deserted, and that has encouraged poachers to kill wild animals, said Upadhyaya.

“The Everest region would be brimming with people with the advent of spring,” he said. “But this year, with the lockdown, it’s easier for [poachers] to set up traps.”

Numerous minor incidents related to wildlife poaching and illegal logging have also been recorded in the country since the lockdown, said Shrestha. At Chitwan National Park, Nepal’s most popular conservation area, an elephant and three crocodiles had been reported killed. 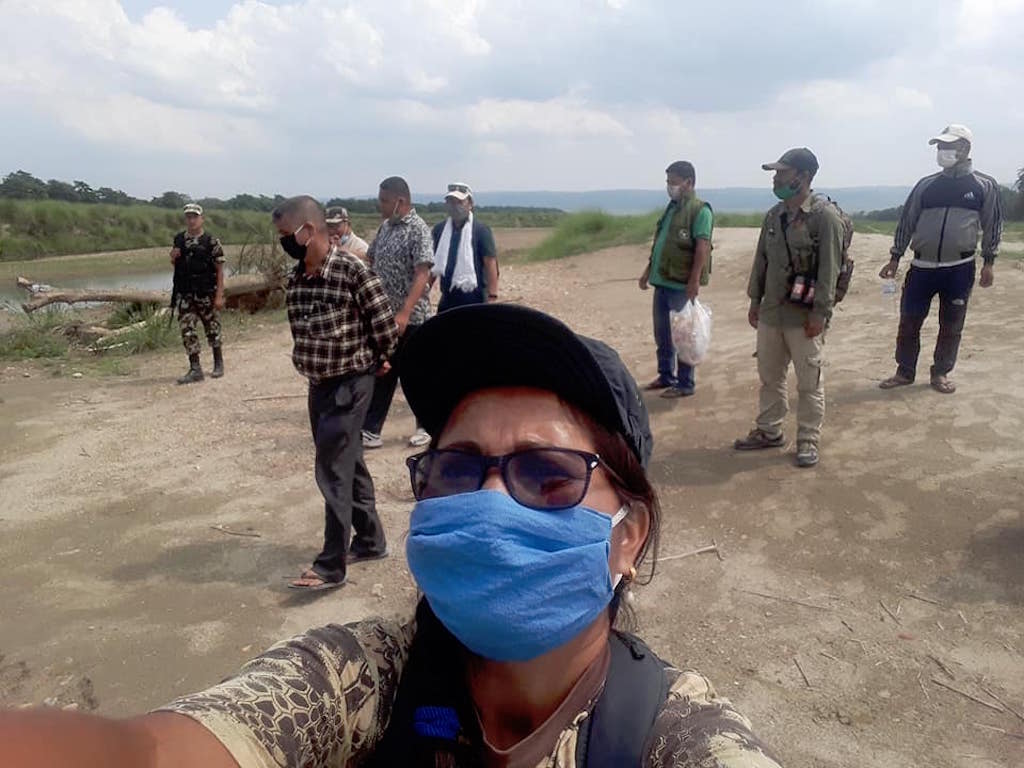 In contrast to the rest of the region, wildlife officials in Bangladesh said poaching has been kept under tight control during the lockdown period.

“We have had no cases of poaching to date after the pandemic arrived in Bangladesh. Despite lockdown, our Wildlife Crime Control Unit is working relentlessly. Since transportation is prohibited, controlling poaching wildlife is now possible,” said Mihir Kumar Doe, conservator at the forests, wildlife & nature conservation circle.

“Bangladesh does not have its own market for wildlife species; rather it is used as a route… But wildlife poaching is going down in Bangladesh during the pandemic,” said Amir Hosain Chowdhury, chief conservator of forests.

According to the Wildlife Crime Control Unit, there were 438 cases of wildlife trafficking recorded between 2013 and the end of 2019, with only 107 cases in 2019.

However, other sources said the illegal trade continues. Some local species – such as deer, pangolin, lizard turtles and native birds – are still being poached and smuggled out of the country, said Shahriar Caesar Rahman, chief executive of Creative Conservation Alliance.

“Now that law enforcement is busy [with the] coronavirus issue, smugglers have opportunities to increase trading through illegal land ports. Many communities in hill areas are now getting involved with poaching or killing wild animals for their livelihood. It is alarming,” he said.

This investigation was published by The Third Pole here. Reporting was done by Adeel Saeed in Pakistan, Neha Sinha in India, AR Joshi in Nepal and Nazmun Naher Shishir in Bangladesh.