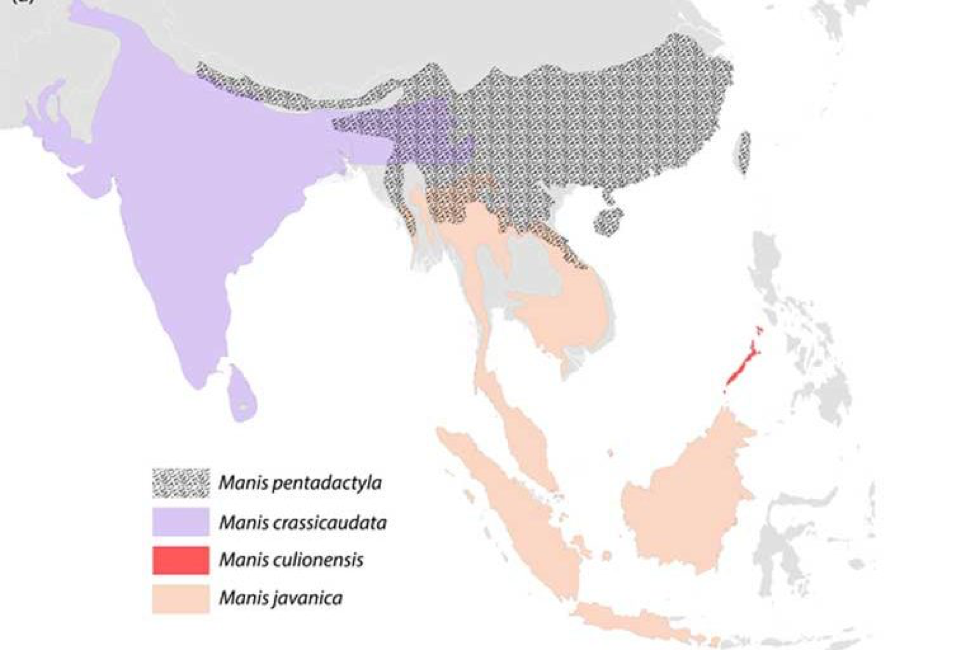 The range of the four Asia pangolin species: the Chinese, Indian, Sunda and Philippine pangolins. A mix of colors within the maps indicates an overlap in the different species’ distributions. The species’ ranges are based on the IUCN Red List assessments (IUCN 2014). Image courtesy University of Adelaide/TRAFFIC

An official from the Association of Southeast Asian Nations’ Centre for Biodiversity (ACB) says governments across Southeast Asia have vowed to strengthen measures to curb illegal wildlife trade, which some suspect may have contributed to the coronavirus outbreak.

“What needs to be enhanced is more collaboration to address wildlife trafficking at a multi-country or at the regional level,” said Theresa Mundita-Lim, executive director of the ACB. “The region is ready to step up efforts to curb [the] illegal wildlife trade.”

Those efforts – outlined in a statement issued by ASEAN ministers in March 2019 – include strengthening global and regional wildlife trade policies, demand reduction, law enforcement, and cracking down on wildlife cybercrime. Mundita-Lim said the ACB is ready to support states to ensure that concrete actions pledged last year are achieved.

The issue was meant to be at the top of the agenda at ASEAN’s Conference on Biodiversity in Malaysia in late March 2020, but the gathering was postponed due to concerns around COVID-19.

The coronavirus pandemic is believed to have originated from a market in the central Chinese city of Wuhan that is suspected of having sold live mammals, including bats and civets — previously linked to the spread of a similar disease, SARS, in 2002. 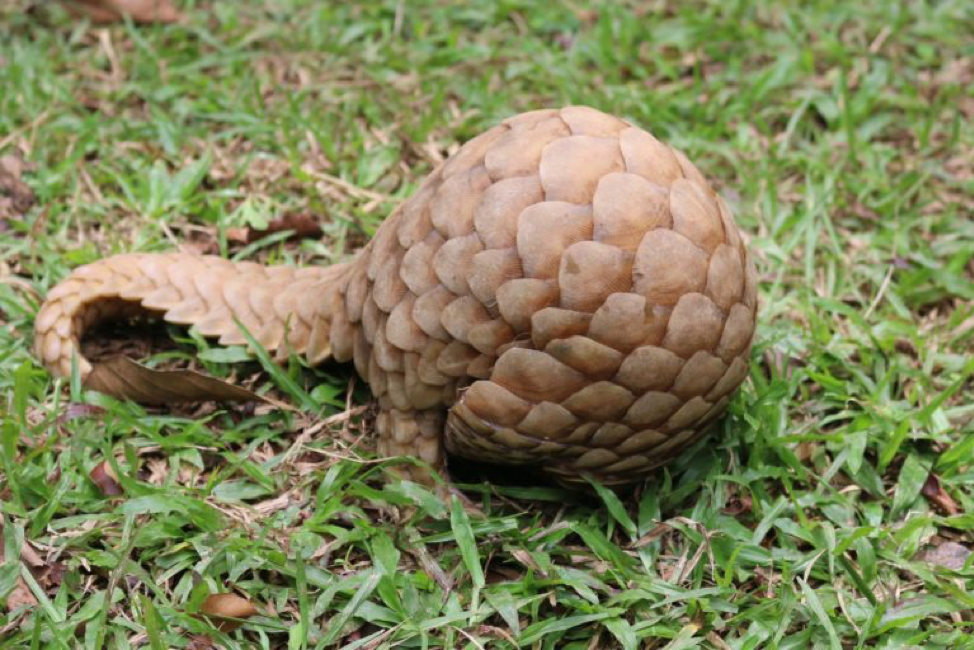 Pangolins, also known as scaly ant-eaters, are shy creatures in high demand for their meat and scales, which are used in traditional medicine. Photo: Wildlife Alliance via Flikr

The reason wildlife trade has come under the microscope is because pathogens that sparked past outbreaks have jumped to people from animals.

“While person to person spread is now common with COVID-19, wildlife to human spread remains a valid and scientific means of transmission and therefore a perceived threat to the health of the general population,” said Dr Jonathan Moses C Jadloc, chair of the Philippine College of Physicians. “This has bearing on the illegal trade of wildlife, particularly pangolin.”

Recent, inconclusive studies found high genomic similarities between the novel coronavirus and a virus found in pangolins, but researchers who study the virus say the similarity should be higher before a source can be identified.

“This move, along with its [China’s] ongoing efforts to contain the virus, will have a significant impact on reducing the animal-to-human transmission of infectious disease,” she said. “Protecting wildlife and improving animal health and welfare are also important in safeguarding public health.”

As early as 2003, Southeast Asia started exploring solutions to wildlife trafficking after Thailand admitted to being a wildlife trade hub, according to the latest report from the Analytical Centre of Excellence on Trafficking (ACET), an open-source data fusion centre.

With China entering the crackdown a decade later through increased enforcement and surveillance, Southeast Asia has seen an increase in reported trafficking cases, and thousands of seizures, arrests and prosecutions.

This, however, has not been enough for the region to support a sustainability plan against wildlife trafficking, which involves each of the bloc’s 10 member states committing $15,000 a year to ASEAN’s Wildlife Enforcement Network, which was launched in 2005 as an inter-regional network of law enforcement agencies to counter the illegal cross-border trade in endangered flora and fauna.

The stalemate in supporting the plan is due in part to the bloc’s consensus voting rule. “As ASEAN is based on consensus, it only takes one out of 10 members to veto a motion,” the ACET report says. “For nine years, Malaysia cast that vote of opposition. When Malaysia finally agreed to join the majority to support a sustainability plan, a new and surprising vote of opposition appeared: Thailand.”

But as the COVID-19 epidemic spreads, it might tip the scales and prompt ASEAN governments to support the sustainability plan and implement stringent policies to protect native species, said Mundita-Lim. This would also be in line with stronger measures that governments are expected to take after the lapse of the 2020 Aichi Biodiversity Targets, including the creation of heritage parks and protected areas.

“Actions on transboundary cooperation and promoting sustainable livelihoods in and around ASEAN heritage parks and natural habitats will help stop the reliance of local communities to poaching, overharvesting and illegal trading of wildlife and their by-products as means to earn income,” Mundita-Lim said. 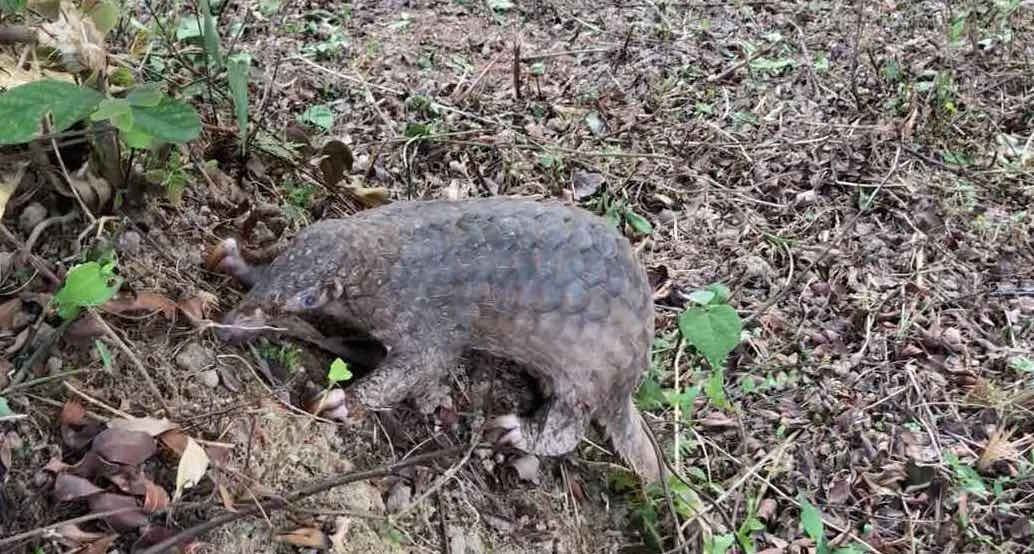 A Malayan pangolin returned to the wild after rescue in China. Photo courtesy China Biodiversity Conservation and Green Development Foundation

Among the animals that need to be protected are the little-known pangolins, the most trafficked mammal in the world. These scaly anteaters are in high demand for their meat and scales, used in traditional medicine. Researchers worry that being linked to the virus increases the threats to these docile creatures, as people might kill them en masse — similar to what happened to civets after the SARS outbreak, the research journal Nature reports.

Populations of pangolins in the region have already dwindled drastically due to heavy poaching activities in the past two decades, according to the international wildlife trade monitoring group TRAFFIC. A TRAFFIC report released earlier this year estimated that around 895,000 pangolins were smuggled in Southeast Asia from 2000 to 2019.

There are eight pangolin species in the world, four native to Africa and four to Asia. All the Asian species are declared critically endangered by the IUCN, including the two species native to Southeast Asia: the Sunda pangolin (Manis javanica) and the Philippine pangolin (Manis culionensis).

Populations of both the Sunda and the Philippine pangolins remain unknown but are assumed to be decreasing rapidly. In Palawan province, the only place where the Philippine pangolin occurs, only 17 individuals were spotted in a 2019 survey that covered 2,400ha of the 165,000ha Victoria-Anepahan mountain range in the town of Rizal.

The survey, led by Dr Sabine Schoppe as part of the US Agency for International Development’s (USAID) Protect Wildlife project, noted that the pangolin count was much lower than in similar ground surveys conducted in other parts of Palawan between 2013 and 2015, but gave no particular number.

“Pangolin poaching and trafficking continue as long as there is a demand from active buyers, both foreign and local,” the report says, adding that limited information on pangolins “hampers the ability of conservationists and local authorities to establish proper baselines for protecting the remaining pangolin strongholds in the wild”.

Reports of rampant trafficking prompted international wildlife trade regulator CITES to bump pangolins into the highest bracket of protection in 2016 by banning all international trade in the species. In spite of this, however, trafficking of pangolins and pangolin parts (scales, meat and blood) continues.

Prior to the ban, pangolins were openly shipped in the region, often smuggled alongside parts from tigers and hawksbill sea turtles, both threatened species.

The trafficking ring in the region follows an intricate maze, ACET’s report says. “Pangolins were sourced and openly shipped from Indonesia, with smaller loads gathered in Cambodia, Thailand, Myanmar, Malaysia and the Philippines,” it explains.

“Live animals and body parts were sent to Yunnan and Guangdong by road, ship and eventually by air to Kunming, Guangzhou and Hong Kong.”

The illicit trade has since been intertwined with that of illegal drugs and other contraband, making it challenging for security forces to crack down on shipments. Indonesian authorities described the region’s illegal wildlife trade as being as sophisticated as the drug trade, according to the Global Environmental Reporting Collective’s The Pangolin Reports.

In the Philippines, the Palawan Centre for Sustainable Development has identified a transnational route that starts at the port of Balabac in southern Palawan and heads north to the island of Mindoro and across to the port of Batangas before exiting the archipelago.

While crackdowns on illegal wildlife trafficking continue on a top-down model, communities have taken their own efforts toward wildlife protection, warning outsiders and migrants against hunting pangolins in their areas and seeking training as forest guards.

“Pangolins are sacred to our culture so we need to guard and protect them from poachers,” said 33-year-old Rolito Landuan from the Palaw’an tribe in Palawan Province. “Indigenous peoples are very much aware of their high value in the market, but for us, they are our symbol of luck in the forest. We are coordinating with the park rangers, forest guards, government and law enforcements in protecting these precious, beautiful, shy creatures.”

In addition to supporting communities to protect wildlife and their habitats and share information about the value of conservation, Rebecca Paz, chief of party for the Protect Wildlife project, said actions that would benefit communities directly were important.

“We also need to look into boosting opportunities for viable and sustainable livelihoods in these communities to dissuade them from engaging in illegal practices that are harming wildlife and other natural resources,” she said.

A different version of this story originally appeared in Mongabay on March 4 2020. This version was published by the Earth Journalism Network here, and was updated for clarity and to include the latest data and information