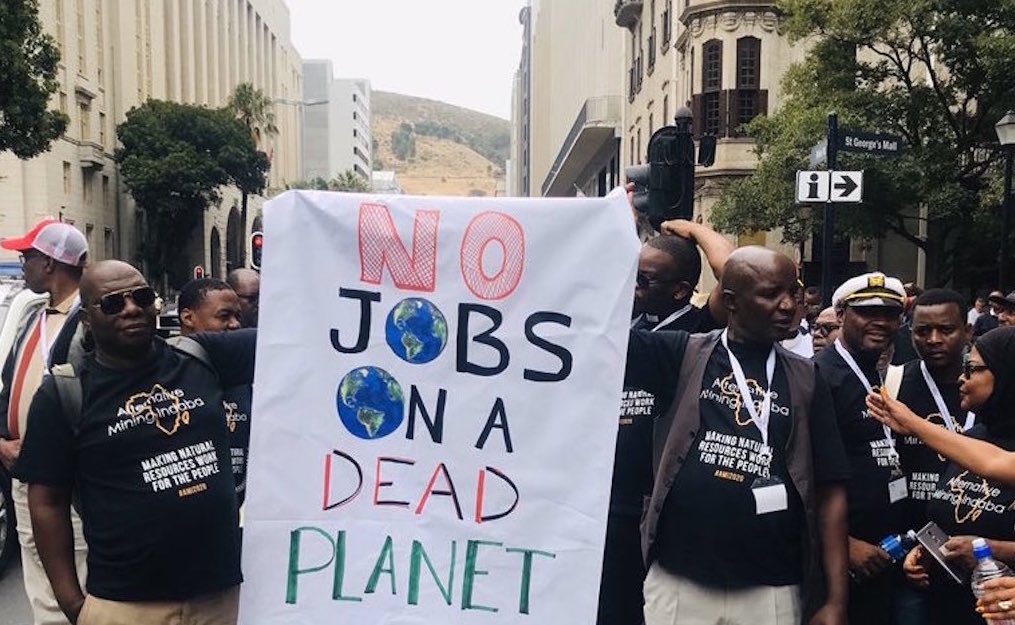 Deliberations at the 11th Alternative Mining Indaba focused on environmental damage and climate change caused by the extractives industry. Andiswa Matikinca was there 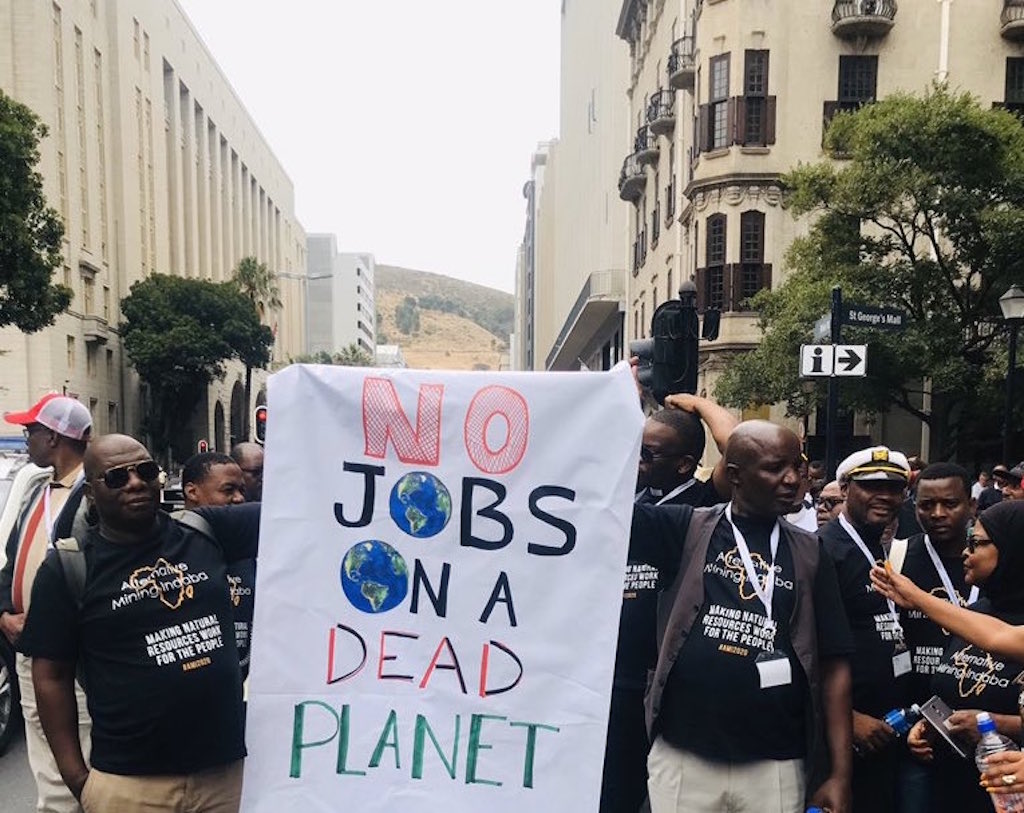 Marchers on their way to deliver the 2020 declaration to the corporate mining indaba. Photo: AMI

Coinciding with the 26th Investing in African Mining Indaba held at the Cape Town International Convention Centre, where mining companies, investors and governments met to discuss the future of mining in Africa, the 11th Alternative Mining Indaba (AMI) convened in Woodstock, Cape Town, last week with more than 500 participants.

The conference’s theme for this year was “environmentally and economically sustainable mineral economies in an era of climate change” and the three-day programme focused on engagements around the extractives industry and climate change. Participants from 33 countries included representatives from the AMI steering committee, official stakeholders, private-sector representatives, representatives from mining-affected communities, NGOs, faith-based organisations and traditional leaders.

The gathering, which takes place annually in February, has grown over the years and brings together stakeholders to discuss various issues in the extractives sector. It also serves as an empowerment tool through training of community members.

“We meet at a time of a deep-climate change threats not only in Africa but throughout the world, characterised by droughts, flooding, energy and health crises, among others, that could have been prevented. While corporations, particularly mining companies and those in the extractives and elites in general, continue as business as usual, the poor communities are left to carry the burden,” read the final declaration that was drawn up after two-and-a-half days of community dialogue and handed over to the Corporate Mining Indaba.

“Communities are carrying the costs of environmental damages caused by mining corporates although they are not the major polluters of these environmental disasters. The extraction of mineral resources in Africa has not benefited Africans but the elites in the global north and the emerging economies like China and India.”

AMI was launched 11 years ago to deal with social injustices prevalent in the African extractives industry, and in response to the annual Investing in African Mining Indaba excluding important stakeholders such as the communities directly affected by mining.

“AMI helps to make the government realise what its role is, because the government sometimes forgets that it is a regulator and not a partner of business,” said Mandla Hadebe, member of the AMI steering committee and acting executive director of the Economic Justice Network (EJN).

AMI delegates share an assortment of interests, Hadebe said. “Each player has a different role and a different opinion, but the primary focus is on the communities. They should be at the centre of all the engagements here, and they always will be as they are the only people who are unprotected and unrepresented.” 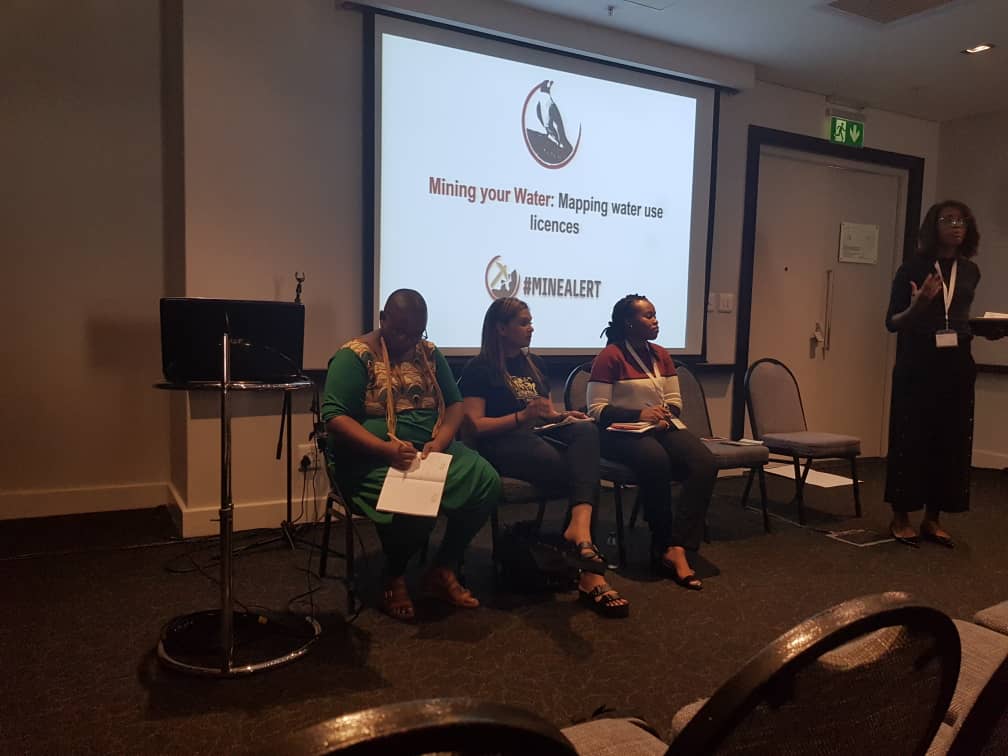 Andiswa Matikinca (far right) discussed the #MineAlert Mining your Water project at a panel discussion on Gender and Climate Change in the Extractive Sector. Photo: AMI

Nomonde Nkosi, regional coordinator of Mining Affected Communities United in Action in Mpumalanga, said being part of a panel discussion as a woman from a mining-affected community was her highlight at this year’s AMI. “Sometimes I feel as if AMI doesn’t accommodate women’s issues in mining-affected communities. We should have this in the plenary, where everyone is there to hear,” she said.

Nkosi mentioned that, although AMI is still very relevant and important, she feels that the space is losing some momentum: “Every last day of the conference we march and take a list of demands drafted during the first two days to the other Mining Indaba, but we don’t get adequate action and responses to those.”

Responding to similar concerns voiced by delegates from mining-affected communities, Hadebe highlighted that important work needed to be done at a national level prior to the convening of AMI so that “the issues come up at the global space. Even the programme should start at the national level, and hopefully we will have the community ideas to frame the agenda, who we are going to engage with and how we are going to use this space which is theirs [the communities].”

“The most important work that needs to be done is at the national level, and that is where our core focus will be. When communities come and they haven’t caucused at national level, then the global issues that are spoken about at AMI will not resonate,” Hadebe said.

The AMI declaration delivered to the International Council on Mining and Metals, the Department of Mineral Resources and Energy and other industry officials at the Investing in African Mining Indaba on the last day of AMI concluded: “We need to craft a political economy that does not generate such natural resource devastation, that embeds and does not externalise the costs of social development and health and public-sector obligations within extractive activities.”