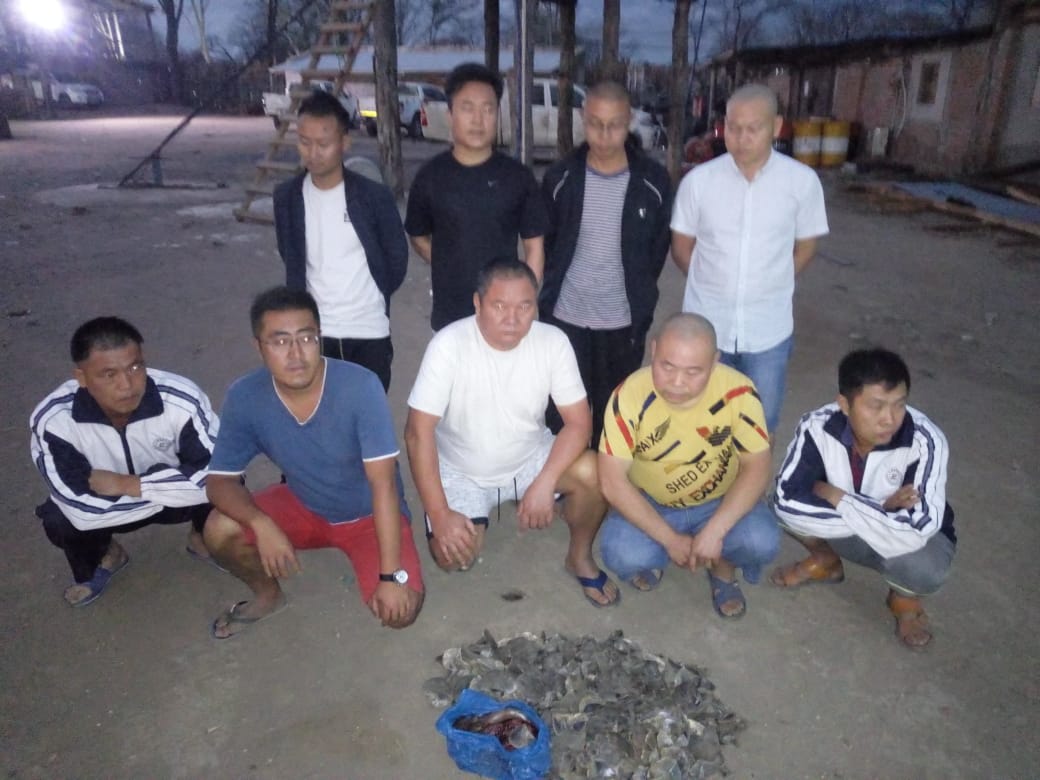 An apparently open-and-shut case of pangolin poaching and torture hit a brick wall when it got to court. Ed Stoddard investigates

Scales of multiple pangolins were recovered when the nine suspects were arrested on September 25 in Tete. Leaked video footage shows some of these same suspects overseeing the torture and killing of a live pangolin. Photo: supplied

The video is short but sickening: a pangolin is placed in a pot with boiling water poured over it, apparently part of a process to remove its scales, a coveted ingredient in Asian traditional medicine.

Several of the men in a leaked video of the incident were among nine Chinese nationals arrested in Mozambique’s Tete province on September 25 2019, according to a report compiled by regional authorities that was obtained by Oxpeckers.

Trafficking and killing of any species of pangolin is a violation of Mozambican and international law. The suspects were apprehended by national wildlife rangers shortly after the torturous killing of the animal, an endangered Temmick’s ground pangolin.

This apparently open-and-shut case then hit a brick wall, according to the report and local authorities who spoke to Oxpeckers on the condition of anonymity.

“Despite hard work on this case by central and regional level branches of the National Administration of Conservation Areas, the National Criminal Investigation Service and the Public Ministry and General Attorney’s office, local Judge Samuel Muiambo (based in Songo, Cahora Bassa) proceeded to overturn all efforts to bring those arrested to justice and immediately released the men under highly suspicious circumstances,” the report says.

According to the report, earlier in September cell-phone footage was circulated of the suspects torturing and boiling a pangolin. On September 24 rangers received information that three pangolins were being held captive at the same facility and were slated to be slaughtered.

“The law-enforcement officers immediately requested authorisation to rescue the animals and make the arrests, but due to delays related to a national holiday the clearances were not received in a timely way. After numerous delays the rangers finally received clearance on September 25 and made the arrests in tandem with the Criminal Investigation Police.

“Unfortunately one pangolin had already been slaughtered, with clear evidence at the crime scene. Scales and body parts of two to three pangolins were seized.” 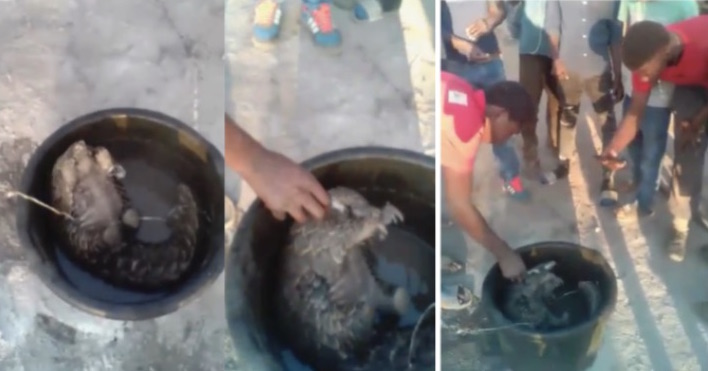 Screengrabs from the video of a pangolin being placed in a pot with boiling water poured over it, apparently part of a process to remove its scales. Photo: supplied

The arrests were made at a facility on a concession of EDN Ltd, a Mozambican-registered timber company situated a few kilometres from Magoe National Park, which forms part of Tete province’s elephant range and “where elephants are also being subjected to intensive poaching.

“This is the second time in less than 12 months that Chinese nationals arrested for illegal activities taking place on EDN timber concessions have been immediately released,” the report says.

Mozambican judicial authorities could not be reached for comment.

For conservationists in Mozambique, such setbacks are frustrating because progress has been made with prosecuting authorities to clamp down on the illicit wildlife trade in one of the world’s poorest countries that is also home to magnificent African flora and fauna.

When the suspects were arrested, according to the report, red flags were immediately raised. The foreign nationals did not provide any identification or immigration documents, as required by law.

The suspects were  suddenly transferred to the Cahora Bassa District. “… this unusual transfer request immediately aroused suspicion as customarily arrests are processed in the same district in which they were committed,” the report notes.

“The legal documents were then handed to Judge Samuel Muiambo, who legalised the arrest despite the documents in this case being incorrectly prepared in accordance with the Mozambican law.

“In a case like this, an ‘Auto de Noticia’ is required to be filed by the law enforcement officers, but instead an ‘Auto de Denuncia’ was filed, documenting a case usually filed by civilians who are a victim of a crime. The failure to prepare the proper legal documents thus allowed the judge to order their release on bail and ‘terms of identity and residency’ – this despite no identity documents ever being provided.

“This strongly suggests the entire ‘legal’ process may have been rigged to facilitate their release,” the report says.

The suspects remain free and at large in the area.

Pangolins have the unfortunate distinction of being dubbed the “world’s most trafficked mammal”, and all the African species of pangolin are staring down the barrel of extinction. In countries such as Mozambique, the trade has been linked to the illegal trade in timber and other wildlife products.

Ed Stoddard is a freelance journalist and editor based in Johannesburg, South Africa