The fight to bring a deadly illegal industry to justice 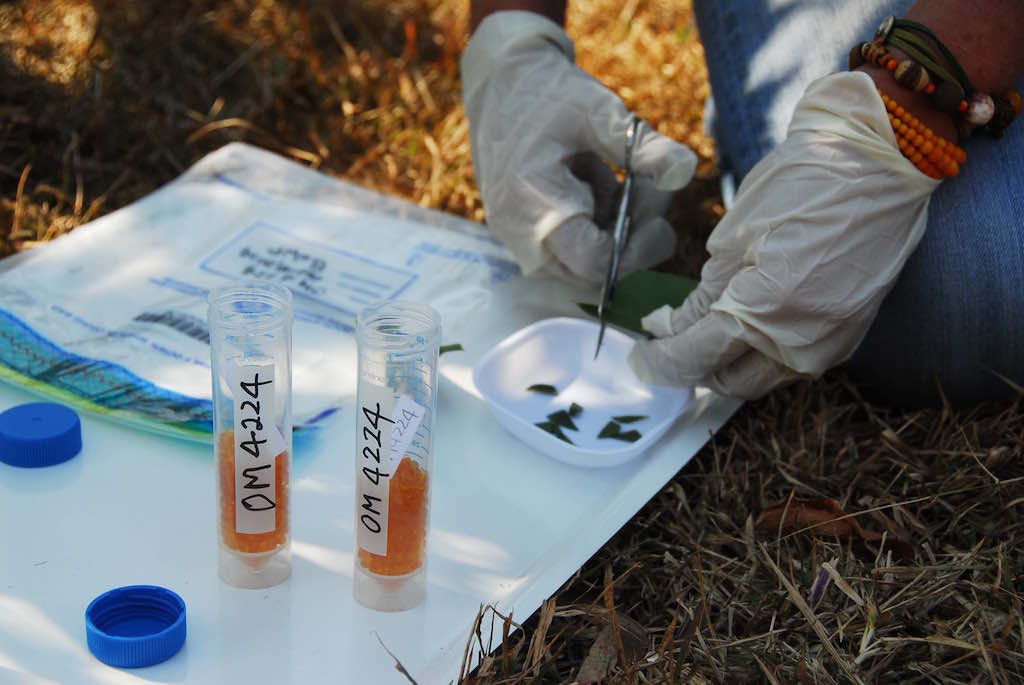 Cycad DNA samples being collected by the Barcode of Wildlife Project in South Africa. DNA sequencing and fingerprint analyses are now the weapon of choice in the fight against wildlife crime. Photo © http://www.barcodeofwildlife.org/sa.html

The cause of death was easy to figure out. The gun had left a deep wound, allowing Fiona Howie to locate the pellet at the base of the deceased’s neck. Spread across the grey metallic table, the victim had been dead for a week. The cadaver was found the day before in the middle of a field, by a passerby who had been walking his dog.

The body on the table is not that of your usual victim, just like Howie is not your typical forensic pathologist. She is a veterinary pathologist, and on her table is a young peregrine falcon.

Wildlife crime is not always taken seriously, despite the fact that wildlife trafficking is the fourth largest illegal industry worldwide, after human, weapons and drug trafficking.

In Europe, unlawful killing of wildlife and seizures of trafficked species rarely lead to arrests. The number of cases that end up in European courts appears to be even more limited, according to data collated by #WildEye.

Part of the problem is that for a criminal case to reach the prosecution stage, law enforcement needs to make a convincing case.

“The difficulty with wildlife crimes is that they often occur in remote areas, so there is rarely a witness,” says Nick Lyall, head of operations at Bedfordshire Police in the United Kingdom and national chair of the Raptor Persecution priority delivery group, an organisation focused on the investigation of crimes involving birds of prey.

“This means that it is even more crucial to recover physical evidence by using robust forensic techniques. If there is no realistic prospect that a case will be successfully prosecuted, because this evidence is lacking, it won’t be taken to court.”

The need for better evidence from a crime scene, to link suspects to wildlife crimes, has led to the rapid development of a field known as wildlife forensics – DNA sequencing and fingerprint analyses are now the weapon of choice in the fight against wildlife crime.

Whenever a person is found dead, identifying the victim, where they come from and whether the death involved foul play are the first steps in an investigation. These questions are particularly difficult to answer with wildlife – often because the remains of the victim are incomplete, or because they have been intercepted far from where the crime has occurred. 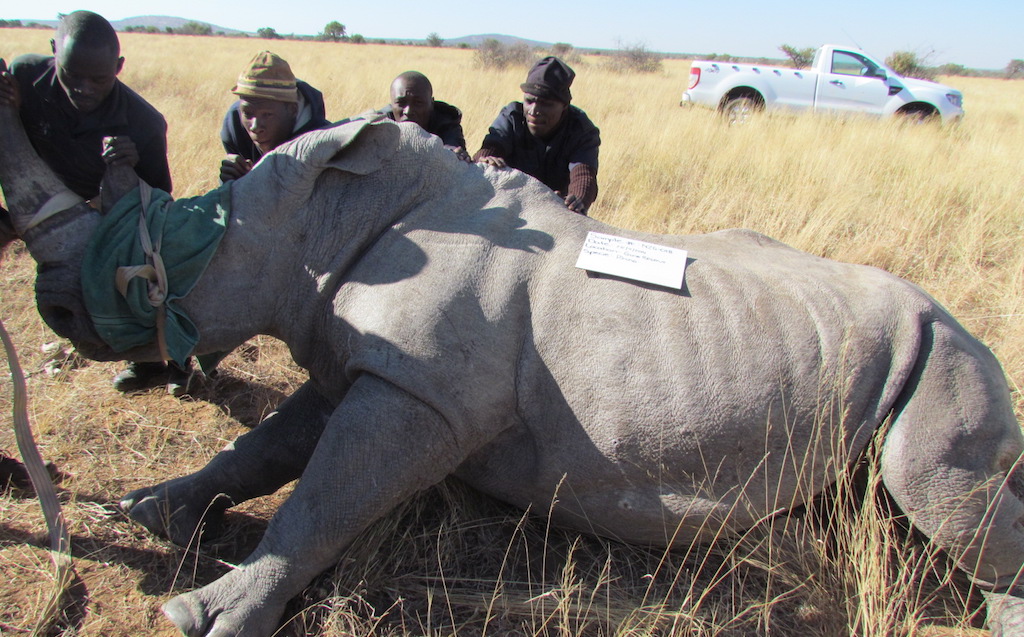 Rhino DNA is collected and stored by the National Zoological Gardens of South Africa. Photo © http://www.barcodeofwildlife.org/sa.html

“My primary role is to look for evidence of criminal activity,” says Howie, who works as a veterinary investigation officer with Scotland’s Rural College in Edinburgh. “I might find evidence of trauma, but I would have to look specifically at the cause of that trauma, whether the animal has been shot or caught in a trap, or if it got injured in another way, perhaps through misadventure. For that you need a good knowledge of what’s normal and what’s not in the anatomy, [appearance] and behaviour of an animal.”

Compared to other types of crimes, victim identification takes an entirely new dimension in the context of wildlife crime – and requires precise DNA analyses.

“We work with such a wide range of species that it can be hard at first to determine precisely which one has been recovered at a scene and whether it’s protected – and thus whether killing it was illegal,” says Nadja Morf, a researcher at the Institute of Forensic Medicine at the University of Zurich, Switzerland.

“Identifying the species we are dealing with is one of the main questions that wildlife forensics are here to answer. Take the example of bushmeat confiscated at an airport. Law enforcement will want to know which species or genus it is, before they know whether they need to investigate and prosecute.”

Experts rely on morphological analyses and on the use of traditional techniques to sequence the non-human DNA samples recovered at a crime scene – be it from animal parts, blood, feathers or bones. Depending on which of these materials scientists are dealing with, the DNA extraction technique may differ, but the idea is always to come up with a DNA sequence that can be matched to known sequences listed in reference databases, in order to quickly identify the species involved.

The problem is that these databases are incomplete and not always reliable. Genbank is an example of a large database that forensic scientists can turn to, but the fact that it is open-access limits its use.

“The data on Genbank is uploaded by people who may misidentify things, and may associate genetic data with the wrong species,” says Lucy Webster, a wildlife forensic scientist from the Science and Advice for Scottish Agriculture (Sasa) laboratories. “You have to be cautious if you use it for species identification, and I try to use more secure, validated databases, but the problem is that they are not as complete.”

The question of where an animal or a plant comes from is relevant because the international Cites treaty protects some species only in certain countries. Learning about the provenance of a specimen may also help trace illegal trade networks.

If ivory products are seized in one location, for example, knowing where they came from and where the elephant was poached can give precious information about where the poaching hotspots are at a given time.

But identifying the origin of a species is no easy feat. “Finding out where something is from and whether it’s a wild or a captive specimen is important. Stable isotope analyses is one of the preferred methods, but again the issue with that is you need reference databases covering the locations where a specimen might have been from so you can actually assess and associate it back to where it was from – and we don’t have those yet,” says Webster. 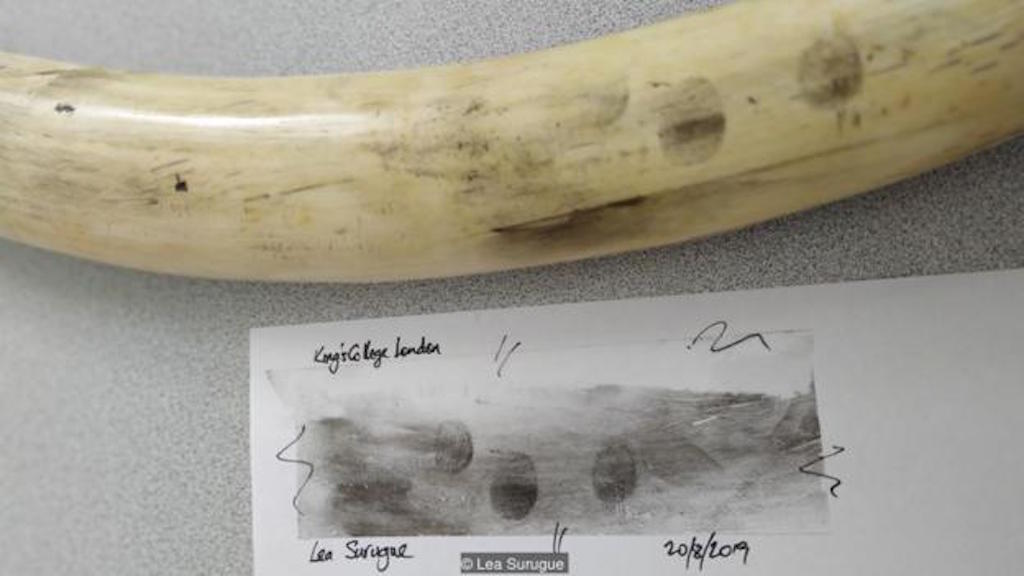 Fingerprints soak into the tiny pores on ivory over time, making them difficult to trace, but a new powder can reveal who touched tusks up to 28 days later. Photo: Léa Surugue

Some success stories do exist. When DNA samples are collected properly, Webster says their analyses can help secure convictions. In a recent case, she was able to use DNA sequencing to prove that the feathers found in the jacket of a man suspected of having stolen kestrel chicks were in fact feathers from this species. As a result, the suspect changed his plea to guilty.

Scientists from WWF Germany have also shown it is possible to create a database with information on wild species using an initiative known as IvoryID to fight international wildlife trafficking. With stable and radioactive isotope analysis methods, they have shown that it’s possible to determine the age of ivory samples, and to match their characteristics to data contained in a free reference database of more than 700 samples of ivory from African and Asian elephant range states. How this model can be replicated to other, more elusive species remains unclear, however.

In 2015 the senior prosecutor for the Royal Society for the Prevention of Cruelty to Animals said, in a presentation to leading scientists, a third of the cases he prosecuted failed because it was difficult to connect a suspect to the crime, even when good evidence had been recovered that could demonstrate what had happened to the animal.

“Even when investigators could identify the species that had been killed and what had happened to it, they appeared to be having difficulty linking the criminal act to a particular suspect,” says independent forensic expert Jo Millington, who attended the talk. “This seemed like a significant disconnect, and it led to new conversations among experts about how human forensics – and techniques such as DNA, pathology, fingerprint or bloodstain pattern analysis – could be applied in an animal context.”

This means conducting research to test, validate and adapt the methods used routinely in human forensics to the context of wildlife crimes – for example, answering questions such as whether a fingerprint can be found on ivory tusks in the same way that fingerprint evidence is recovered from regular evidence, like glass.

One of the most successful examples of such research is perhaps the collaboration between Leon Barron from King’s College London and Mark Moseley from the Metropolitan Police Service, who worked together to develop a new ivory fingerprint kit, which is dispatched to more than 40 countries. The powder it contains can reveal prints up to 28 days after poachers have touched the ivory, compared to two or three days with conventional methods.

“Fingerprints on ivory degrade rapidly over time as they soak into its tiny pores, almost like a sponge,” says Barron. “The small powders we use are only about 40 micrometres in diameter, so they can stick to less fingerprint residue on ivory and give higher definition images, much like increasing the number of pixels in a camera. We have created something that’s really simple to use on the ground and has direct implication to identify a suspect and catch poachers which, at the end of the day, is what we want to do.”

Barron also recently showed that it is possible to predict the age of a person from the DNA contained in their blood, using artificial intelligence. The hope is that this can be replicated and validated for blood stains at crime scenes, and potentially used to solve future wildlife crimes.

Back in the field, Nick Lyall is optimistic that the use of these advanced techniques can help catch criminals sooner – but scientific work still needs to go hand in hand with a robust legal response.

“Sanctions that wildlife criminals receive are not strong enough, even when there is good evidence brought forward by robust forensic methods. Forensic sciences are a major step forwards in the fight against wildlife crime, but the law needs to be stricter and better enforced if we are to end this problem once and for all,” Lyall concludes.

• Find out more about the Barcode of Wildlife project here