Craving for caviar is driving the Danube sturgeon to extinction

Amid rising demand from oft-unwitting consumers, local greed in a failing economy, weak controls and corrupt law enforcement, the wild sturgeon stock along the Danube is being driven toward extinction. Denise Hruby investigates

Fisherman Ivan Ivanov inspects his net at his home in Bulgaria. He was fined $1,500 for catching a sturgeon. Photo: Arno Friebes / LA Times

Silistra, Bulgaria — Whatever had got caught in Ivan Ivanov’s net, he knew it wasn’t an ordinary fish. The sheer strength with which it was pushing against the Danube River’s current suggested a mass several times Ivanov’s own body weight.

Reeling it in, the fish towed him and his boat as if they were toys. “It could have killed me,” Ivanov recalled. Only a sturgeon, he reckoned, could put up such a fight. It turned out to be 485 pounds (about 219kg).

It was an extraordinary catch. Sturgeons have become so rare in the Danube that they have been declared a protected species by several nations. Fishermen face hefty fines or jail sentences for breaking the laws.

But sturgeons like the one in Ivanov’s net hold the promise of changing one’s life. At that weight, the sturgeon would have carried roughly 110 pounds (49kg) of roe, which, when cured, is caviar. The world’s most expensive food, caviar retails for as much as $3,000 per pound (0,45kg).

Fishermen like Ivanov, who was caught by authorities with the still-live sturgeon, are the first link in a sophisticated global supply chain that funnels caviar from illegally harvested wild sturgeons to fine-dining tables of New York, Los Angeles or London.

Amid rising demand from oft-unwitting consumers, local greed in a failing economy, weak controls and corrupt law enforcement, the wild sturgeon stock along the Danube is being driven toward extinction.

Sturgeons may have survived the demise of the dinosaurs, but chances are high that they will be wiped out within years.

Fish farms have long offered a sustainable alternative, but it isn’t easy to farm sturgeon. Investments are necessarily high and demand tremendous patience. While farmed sturgeons cost money each day until they carry roe — for some species after up to 15 years — the Danube is raising them for free.

Criminal syndicates have cynically caught on: all that must be done is to label a wild, illegally sourced caviar as originating from a farm. In 2003, five years after a first big crackdown on the wild caviar trade, the United Nations reported that “perhaps no sector of the illegal fauna or flora trade has been criminalised to the extent of that of sturgeon and caviar”.

In the mid-2000s, US Fish and Wildlife Service investigators found that illegal caviar selling had became so lucrative that seven of the East Coast’s 10 biggest caviar traders were illegally importing millions of dollars’ worth annually, unbeknown to consumers. The US government has signed an international agreement to improve labelling systems to ensure consumers that their caviar is legally sourced and sustainable, but has yet to implement it.

Amid spotty enforcement, the market continues to grow, from $360-million in 2017 to a projected $500-million in 2023, according to an analysis by Global Info Research.

As with any illicit trade, it’s impossible to know just how much illegally sourced caviar is flooding the market, but recent market analysis and DNA tests have shown that it is still found across the globe, according to Jutta Jahrl, who works for the World Wildlife Fund for Nature and manages the Life for Danube Sturgeons project.

“In volume, it’s got to be less than before, simply because there aren’t many sturgeons left. But it’s clear that it’s devastating for the few that remain,” Jahrl said. 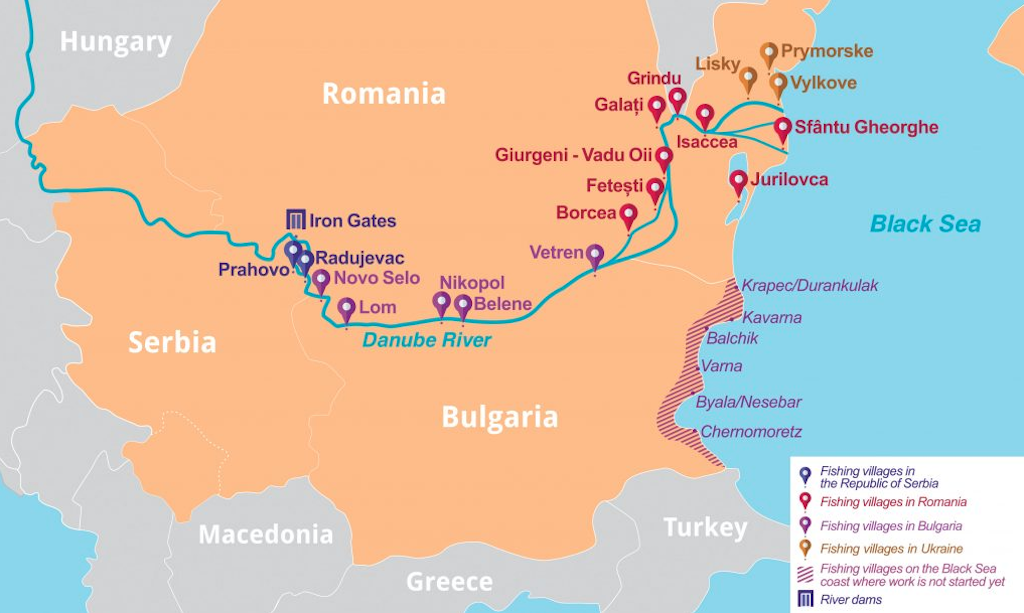 Death on the Danube: With weak controls and fishermen lacking alternative means of income, the trade was driven underground. Map courtesy Life for Danube Sturgeons project

Rulers of the Danube

Several decades ago, fisherman Rumen Troskov said, sturgeons were so abundant that he fed caviar “by the spoon” to his then-pregnant wife. The 62-year-old said  the nourishing roe is the reason his son weighed 10.6 pounds (4,8kg) at birth.

Troskov lived and fished in the Bulgarian border town of Tutrakan all his life. “They used to call us the rulers of the Danube,” he said, and talked about himself catching sturgeons that weighed up to 250 pounds (113kg). Others regale listeners with stories of legendary catches of up to 1,000 pounds (453kg) that brought wealth and turned fortunes to the degree that the angler was elected to public office. It’s sometimes difficult to dissect where truth ends and bravado begins.

Before Romania first issued its moratorium on sturgeon fishing in 2006, total catch figures had plummeted. According to data provided by the Romanian government, catch figures for the Russian sturgeon — the source of osetra caviar, among the most expensive types — plummeted from 8,214 pounds (3,725kg) in 2002 to just 82 pounds (37kg) in 2005.

Bulgaria followed Romania’s lead in 2011, but the ban and rarity of sturgeons served only to increase demand. Prices skyrocketed, and with weak controls and fishermen lacking alternative means of income, the trade was driven underground, Jahrl said.

For fishermen willing to risk the penalties, catching a female carrying roe is equivalent to winning the lottery, she said. Troskov’s last catch, in 2017, was a small male. Saying now that he was unaware of the law, he listed the catch in a booklet he was required to keep that documents his fishing activities. When authorities checked the booklet, he said, they scolded him for catching a sturgeon, but otherwise let him off the hook.

Cheekily, he showed a so-called Karmak — a line with sharp, thick hooks concealed by corks that float a few centimetres above the riverbed. They’re designed specifically to catch sturgeons.

“Of course, they aren’t allowed anymore. They say they are cruel, and that we need to protect the sturgeon,” Troskov said, noting that he keeps the Karmak solely for nostalgia.

Sturgeons may have survived the demise of the dinosaurs, but chances are high that they will be wiped out within years. Photo courtesy Life for Danube Sturgeons project

Karmaks are a main focus for Mihail Mihailov. As director of the fisheries and aquaculture agency for Bulgaria’s central Danube region, he confiscated more than 80 in the first five months of this year. But, he said, he lacks the staffing, equipment or jurisdiction to make a dent in sturgeon poaching.

“We always confiscate about the same number, every year,” he said. For the most part, he relies on informants who point him in the right direction. It’s old-school detective work, but he said it works — after all, that’s how he caught Ivanov.

Ivanov’s catch was so large, he called a friend for help. Together they finally pulled out the sturgeon, rode to the shore and lifted her into the back of a van, which was just big enough to fit the fish. She was bleeding but still breathing when Mihailov and his team intervened.

The fish was soon released back into the Danube next to a national park — with a microchip implanted to keep track of it.

This month, Ivanov was ordered to pay a fine of about $1,500. It’s more than he makes fishing for carp and catfish in an entire year, he said.

Mihailov knows that his work hits hardest at the lowest rung of the supply chain, its poorest link. Still, he said, “everyone is responsible for themselves. They know the law, and we can’t make a difference between rich and poor.”

The law, Ivanov countered, was made without considering those most affected by it. Since he lost his job as a night guard last year, fishing has been his only source of income.

“I’m almost 62 — who’s going to hire me?” Ivanov said, staring at a wall blackened by a recent gas fire that destroyed parts of his ramshackle home. “I had to come up with my own way of making money.”

Instead, he’s landed in debt. Yet Ivanov still claims to be innocent, saying he had wanted to release the sturgeon back in the Danube after nursing her injuries. Authorities issued the fine after determining that his story made no sense.

And the fish, at last check, was still swimming in the murky waters of the Danube.

This investigation was supported by a grant from the Internews Earth Journalism Network and was published by Los Angeles Times here.