Posted on 1 Aug, 2019 by Oxpeckers Reporters

How the online illegal trade of rhino horn works, and how innovative technology is being used to disrupt the market

Blind trust: A sophisticated criminal network is driving the slaughter of rhinos, leading to the creation of a vast online ecosystem in which their horns  are being sold. Photo: Yolandi Groenewald

With increased internet access, new avenues for marketing and selling endangered species and their products are being created at lightning speed. As demand grows, so too does the variety of commodities available and the techniques used to avoid detection.

Cyberspace allows for both sellers and buyers to remain anonymous, and to find things that might otherwise be difficult to find (often because they are critically endangered), all with just a few clicks.

Sellers sometimes use their real names, but will never give away their actual identity or let any details about their lives slip in casual conversation. Although they have to start somewhere – the part of the internet that is open and accessible to anyone is the usual starting point – these types of interactions often end up on what is called the “Darknet”. Access to this level of the internet requires password authentication and includes platforms like Whatsapp, closed Facebook Groups and WeChat.

It is easier to remain undetected by the use of different keywords, by having a virtual private network (VPN) turned on at all times and, in many cases, a seller and buyer will never meet in person. A successful transaction relies on discretion, blind trust and middlemen. 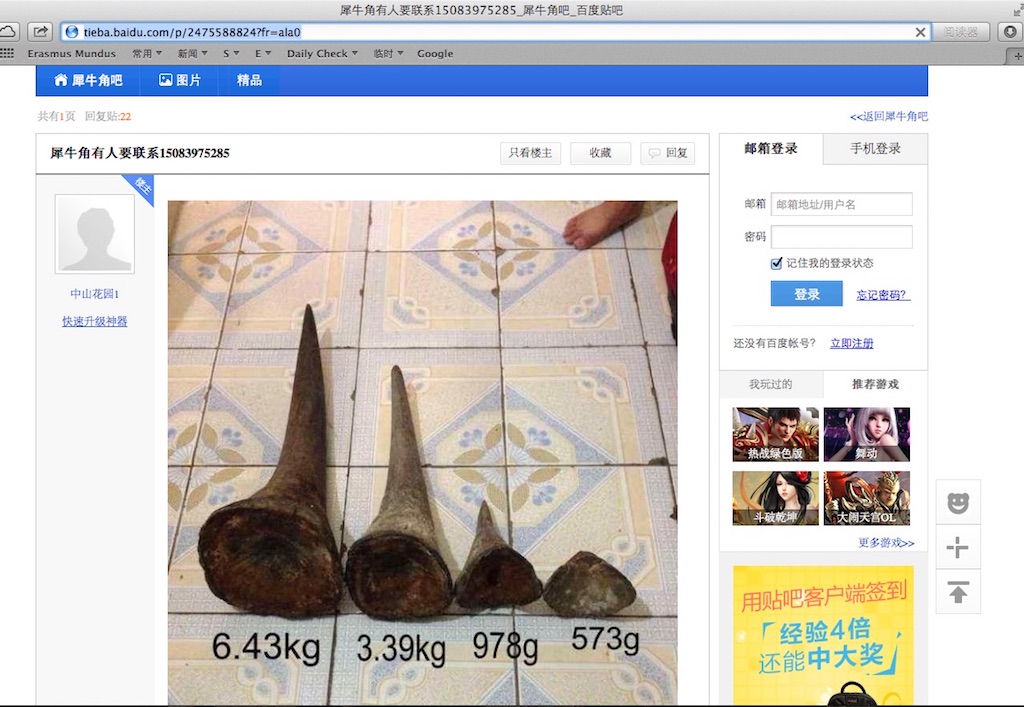 Starting point: Rhino horns offered for sale on China’s largest online community platform Baidu Tieba. It is not possible to tell from the advert whether they are real or fake. Photo sourced

When it comes to payment, Western Union is a popular choice. Mostly, this is because you can make and collect payment in cash, so there is no need to worry about involving bank accounts. Senders and receivers both need to present a legitimate form of identity document, which is why some traders prefer to have someone else collect payment, like a middleman/woman. They may also already have a fake ID.

Other global payment platforms, such as PayPal, require a bank account to be linked to them, making transactions more easily traceable, and an undesirable option for illegal wildlife trade.

Sometimes the deals are conducted in person at trade fairs, where everyone operates with cash and often deals are set up online beforehand, through group chats and forums.

This sophistication means that, at the moment it is possible to get away with illegally trading wildlife online. When law enforcement becomes more sophisticated, the market just goes deeper and further into the hard-to-find parts of the Darknet. If this happens, there could be an increase in the use of cryptocurrency as payment for illegally traded commodities.

Tracking these trades is taking up more and more time for organisations such as the International Fund for Animal Welfare and the global wildlife trade monitoring group TRAFFIC, which have researched online illegal wildlife markets, gathering information about advertisements found on e-commerce platforms, public forums and social media.

Their starting point is often an advertisement — for an animal as endangered as a pangolin — placed on an e-commerce platform or social media. While this request is public, the responses are not.

Their research shows that while placing an advertisement online might only seem like a small part in the bigger picture of illicit wildlife trade, it is increasingly becoming the place where actively interested communities are created.

Driven by this demand, rhino poaching in South Africa — home to about 80% of the world’s rhinos — has grown dramatically since 2008

Since 2008 rhino poaching in South Africa has hit a critical point. Although fewer rhinos are being poached – figures released by the Department of Environmental Affairs on July 31 showed 318 were killed in the first six months of 2019, as against 386 in the same period in 2018 – rhino numbers are declining. This is in part because of how expensive it has become to protect them – right now, a rhino is worth more dead than it is alive.

South Africa’s largest private rhino breeder, John Hume, is reported to have said it costs him at least $5-million a year to protect and take care of his nearly 1,700 white rhinos. The controversial breeder, who is a leading supporter of the legal, international trade in rhino horn, successfully challenged the government’s 2009 moratorium on the domestic trade of rhino horn in 2017. Earlier this year, he claimed bankruptcy and released a crowdfunding plea.

Turning to technical innovation to protect endangered species such as rhinos has become the leading approach by organisations like the Global Initiative against Transnational Organized Crime and Rhino Coin.

At the beginning of last year, the Global Initiative (GI) launched Digital Dangers, a project that aims to better understand and disrupt digitally-enabled wildlife trafficking. In partnership with the Centre for Analysis of Social Media, it created an online search engine that monitors how, where and when endangered plants and animals, or commodities containing them, are transacted using the internet.

This tool, the Dynamic Data Discovery Engine, searches the internet for any and all mentions of specific keywords like “ivory”, “scales” and “horns”, and then separates out the relevant results, to create a list of URLs where users can find advertisements and conversations of what is potentially illegal activity – in other words, where people are selling and buying endangered animals, and their parts and products.

Project lead and senior researcher Simone Haysom says trying to understand the big picture is what led the GI to use technology to look at possible interventions. “The internet confounds traditional research methods – you can’t visit physical locations and use face-to-face interactions to understand illicit markets, or examine dockets and trial hearings, because there is so little enforcement of online law breaking,” she says. 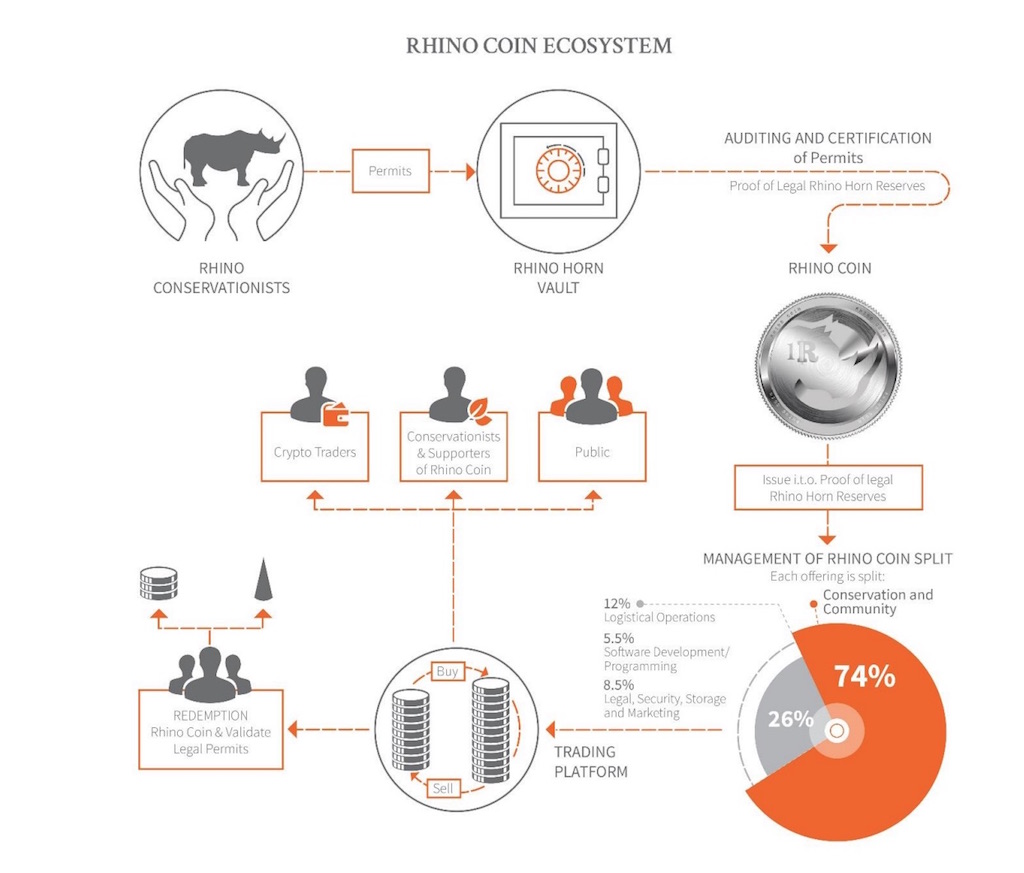 Blockchain solution: At present, there are close to 110,000 Rhino Coins in circulation. Graphic: sourced

Rhino Coin founder Alex Wilcocks believes that turning the focus from dead to live rhinos is the way forward: “We need to allow the rhino to produce a profit, but right now there is a massive liability risk in keeping them alive.”

When one of his family’s rhinos was poached about four years ago, Wilcocks decided to create Rhino Coin, an asset-backed blockchain solution. The idea, he explains, is to separate the physical asset from its value. It has an underlying economic value on redeeming cryptocurrency for the actual representation it was issued against, by converting it to cryptocurrency in a 1:1 coin:gram of horn ratio. At present, there are close to 110,000 Rhino Coins in circulation.

“It is difficult to raise funds from our own economy, and we can’t really raise funds internationally because they can’t get access to the horn legally,” he says. The rhino horns, which are brought to his organisation by conservationists and go through a rigorous process of auditing and ensuring that they are indeed legal, are stored in a secure vault “somewhere deep underground”.

The asset stays in the vault and participants trade its value online. An important aspect of Rhino Coin is traceability, due to it being traded via blockchain. If the global ban on rhino horn trade is lifted (currently, it is legal to trade legal rhino horn within South Africa), the organisation “can supply the eastern market with legal horn that has not been poached” and Rhino Coin will be able to track the movement of money and of the horns as they move across the globe, he says.

Digital market: Ivory cut pieces sold on Yahoo! Auctions in Japan. Research by TRAFFIC tracked at least 13 such items weighing from 500g to more than 1kg that were sold over a four-week period by four sellers, three of which were registered businesses

Online illegal wildlife trade is always evolving, and has shown an ability to adapt, as long as there is money to be made, says Caroline Cox, a senior lecturer at Portsmouth Law School who co-founded of the Ivory Project, which researches and reports on trade in ivory goods among antique dealers and auction houses based in the United Kingdom.

Increased efforts to disrupt it, while necessary, could force the market on to the Darknet, which will in turn require an even greater need for technological interventions, she says.

Cox says disruption will rely, in part, on big online-based companies stepping up and taking more action: “They have to put in proper, relevant and realistic interventions to see what traders are putting up. All the cards are in their hands.”

This investigation is part of a transnational series investigating how online illegal wildlife trade facilitates illicit financial flow, produced with the support of the Money Trail project. The article appeared in the Mail & Guardian newspaper of August 8 to 15 2019.