Europe cracks down on wildlife crime 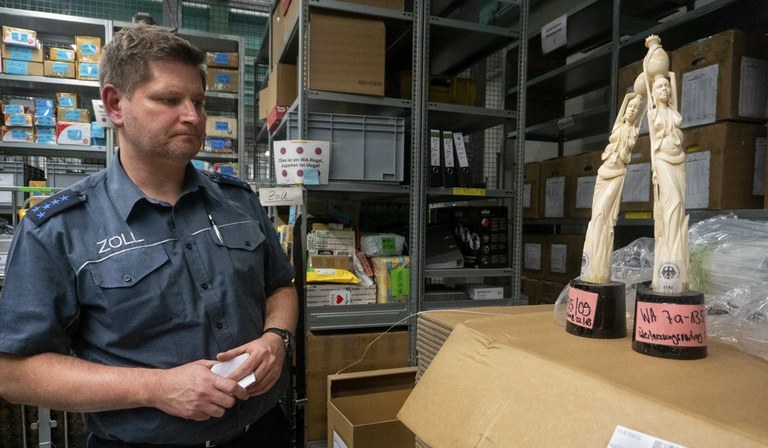 Analysis of #WildEye data shows there has been an increase in the number of court cases and convictions taking place across Europe, writes Roxanne Joseph

In the mail: Customs officer Marcus Redanz with statues made of ivory seized by his team at the International Postal Centre in Frankfurt, Germany. Photo: Denise Hruby

If you follow news about illegal wildlife trafficking, you may feel overwhelmed by the increasing number of daily reports about the interception and seizure of huge amounts of natural resources being traded illicitly around the globe.

“Every single wildlife shipment has been orchestrated and facilitated by several individuals. For every seizure several individuals should be identified and prosecuted. Every. Time. #wildlifecrime #investigation,” tweeted @WildCrimePro in response to the seizure on July 21 by authorities in Singapore of yet another “record haul”, this time of ivory and pangolin scales en route from the Democratic Republic of the Congo to Vietnam.

Global pressure to crack down on illegal wildlife trade should mean more convictions and tougher sentences. Data shared by the Wildlife Justice Commission via the #WildEye digital tool suggests that it’s working.

Analysis of the data shows there has been an increase in the number of court cases and convictions taking place across Europe: in recent years about 10% of reported incidents have resulted in convictions, leading to jail time, community service or hefty fines.

This is in large part due to a change in attitude and policy by the European Union. In 2017 wildlife trafficking was recognised as a priority under the EU’s fight against transnational organised crime, which subsequently led to more resources being devoted to combating it between 2018 and 2021.

This has led to greater collaboration among law enforcement agencies and increased financial support for cross-border investigations, resulting in major seizures such as Operation Thunderstorm last year and Operation Thunderball in June 2019. 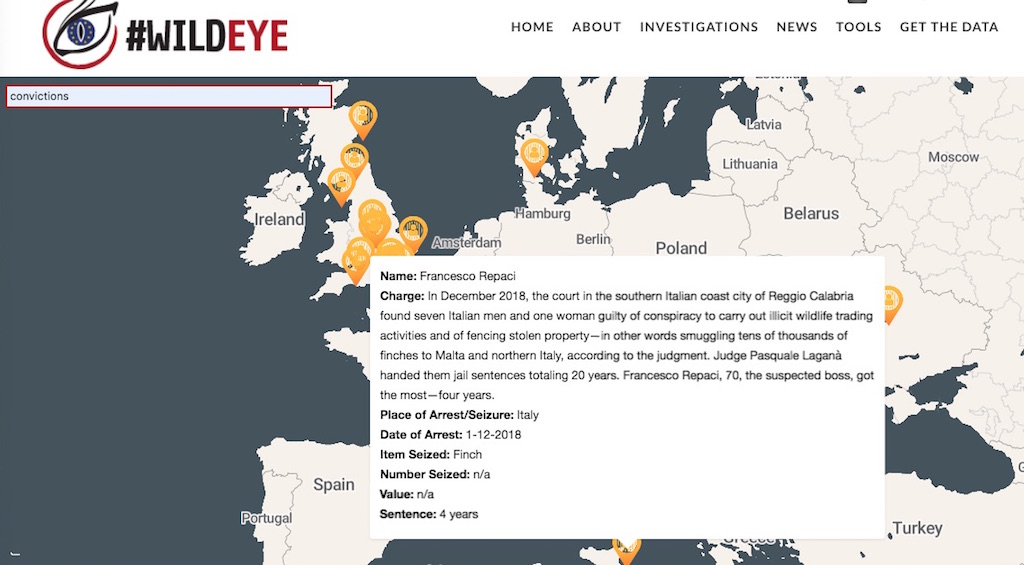 On record: A search for convictions on #WildEye

#WildEye tracks and shares information on seizures, arrests, court cases and convictions related to wildlife crime in Europe. Launched in January 2019, in a partnership between Oxpeckers Investigative Environmental Journalism and the Earth Journalism Network, the platform is creating one of the largest, open-source databases of wildlife crime to aid journalists, organisations and law enforcement agencies in monitoring and investigating illegal wildlife trade across the continent.

Our recent partnership with the Wildlife Justice Commission (WJC) has helped to broaden the #WildEye dataset. The WJC works to disrupt and help dismantle transnational organised criminal networks trading in wildlife, timber and fish. It carries out investigations in some of the biggest trade hotspots (including Vietnam, Malaysia and China), and works closely with law enforcement agencies to stop wildlife crime.

WJC provided #WildEye with data on more than 200 Europe-based incidents, and a further 66 events linked to Europe – where commodities either originated from or were transported through the continent.

Out of 216 incidents reported between 2007 and now on the dataset, 20 ended in conviction – this entailed serving time in prison, doing community service, or paying hefty fines. Twenty-nine incidents ended in arrests and 28 investigations are ongoing.

Around 2016 there is a spike in the data reflecting the number of convictions, with eight that year alone. Previously, between 2007 to 2015, the data only shows six convictions in total.

As time goes by, the length of prison sentences also starts to increase, and the fines imposed on offenders grow, drastically.

Efforts to maintain and update the #WildEye database entail continuously reaching out to law enforcement and organisations who collect this type of information. Keep an eye on the tool to keep track of the seizures and their outcomes.

#WildEye is part of a broader project that aids journalists to investigate illegal wildlife trafficking in Europe. Their in-depth investigations expose wildlife smuggling networks and how they work across the continent, providing insights into how the links operate on a global scale. Find the dossier of investigations below the #WildEye map here.