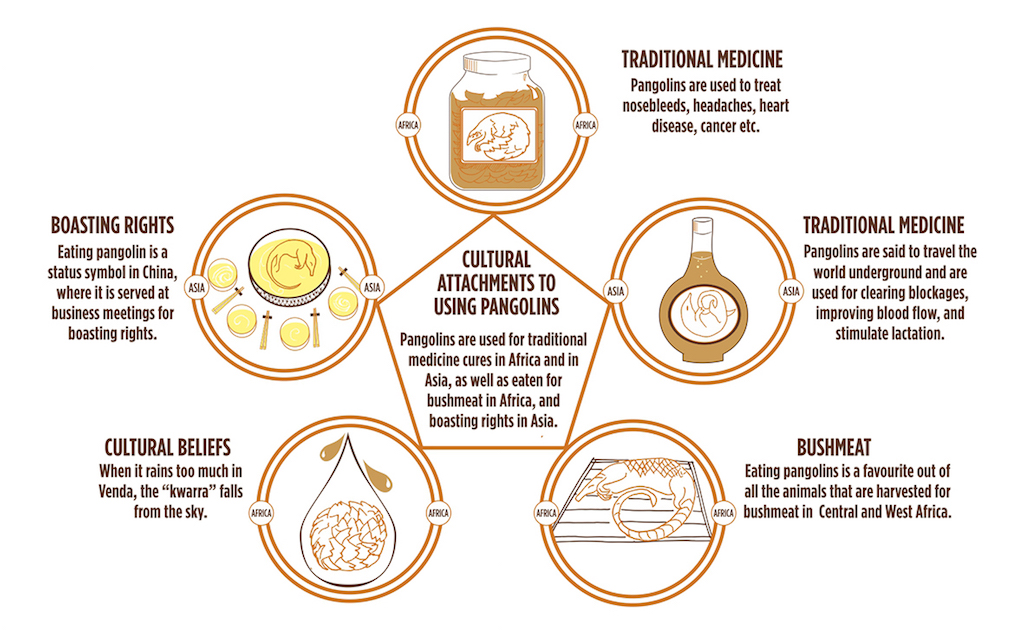 Posted on 5 Jul, 2019 by Oxpeckers Reporters

Use of pangolins for bushmeat and African traditional medicine, particularly in poor communities, is complicated by the growing, unsustainable demand for scales from Asia. Alexis Kriel investigates

Pangolins used as a commodity in cultural belief systems and for food is driving this species to extinction. Graphic: Lori Bentley

A spirited video clip of martial arts guru Jackie Chan and three animated Kung Fu pangolins sends a strong message to Chinese consumers that these animals are protected by law. The clip ends as the heroic pangolins assist Chan in dumping a poacher in the trash and a tagline that has become synonymous with these celebrity-driven campaigns: “When the buying stops, the killing can too.”

WildAid, which conducts extensive surveys to calculate positive behavioural change, says campaigns like this have helped reduce shark fin sales in China by 80% since 2011.

To raise public awareness about the illegal wildlife trade, the organisation has enlisted more than 100 celebrities, including Prince William, David Beckham and Richard Branson. Its ambassador for the shark fin campaign was Yao Ming, a retired professional basketball player who is one of China’s best-known athletes.

According to Peter Knights, WildAid’s founder, these campaigns have helped to reduce the global consumption of wildlife products, with ivory sales down by more than two thirds in Asia, by a third in Kenya and cut in half in Tanzania from 2017.

For pangolins, however, curbing consumption is harder, says Knights, particularly since the scales can be sold legally in China for traditional medicine through state-authorised hospitals.

In 2016 all eight species of pangolin were listed on Appendix I of the Convention on International Trade in Endangered Species (CITES), making international trade in them illegal. But that does not stop China from trading them domestically.

China’s annual domestic use amounts to roughly 25 tons of pangolin scales for medicinal purposes – the equivalent of up to 50,000 pangolins, according to the China Biodiversity Conservation and Green Development Foundation.

With Asian pangolin populations under pressure from poaching and habitat loss, these mammals are being sourced elsewhere. Since the beginning of 2019 customs officials have confiscated more than 50 tons of African pangolin scales en route from Nigeria to Asia.

Knights believes the most powerful actions for protecting pangolins worldwide would be for Chinese traditional medicine associations to remove pangolin scales from their pharmacopeia and for China to ban domestic use of scales and promote existing alternative treatments, as it did for rhino horns. 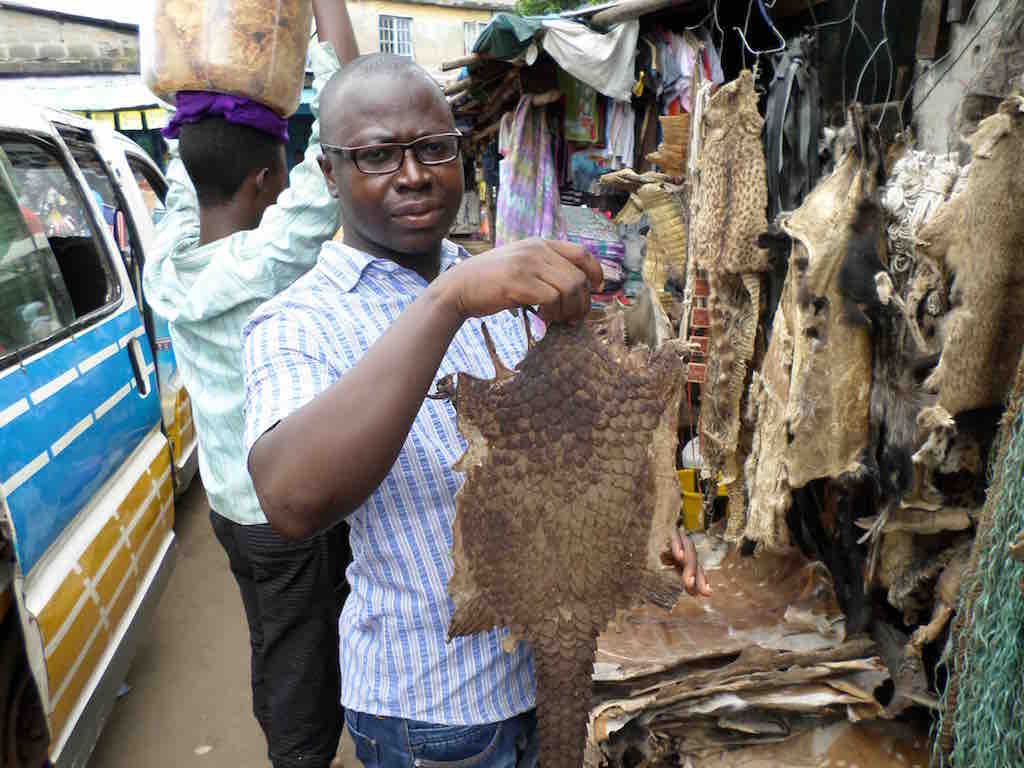 A full pangolin skin with all the scales intact, for sale in an African ‘muthi’ market. Photo courtesy African Pangolin Working Group

Knights is currently travelling in Africa, where WildAid’s “behavioural change” campaigns have started rolling out. Similar to the successful Asian film clips, these campaigns use local celebrities, such as athlete Eliud Kipchoge of Kenya, actress Anne Kansiime of Uganda and Springbok rugby player Tendai “Beast” Mtawarira of South Africa, under the banner “Poaching steals from us all”.

He says WildAid’s emphasis in Africa is on promoting sustainable tourism, encouraging local people to visit their national parks and for there to be greater value in  wildlife tourism as opposed to poaching. These campaigns have been specifically adapted to the African context, with a strategy to reduce human-wildlife conflict and encourage public and political support for conservation.

There is a very real threat to pangolin populations at the current level of use – for bushmeat and African traditional medicine (muthi), particularly in poor, under-resourced communities. This demand is specific to the trade in Africa but complicated by the growing, unsustainable demand for pangolin scales from China.

According to the World Health Organisation (WHO), traditional medicine is the first level of contact many people in developing countries have with healthcare due to inadequate modern medical facilities and affordability when these are available. The WHO estimates that 80% of Africa’s population uses traditional medicine either on its own, or in combination with Western medicines. 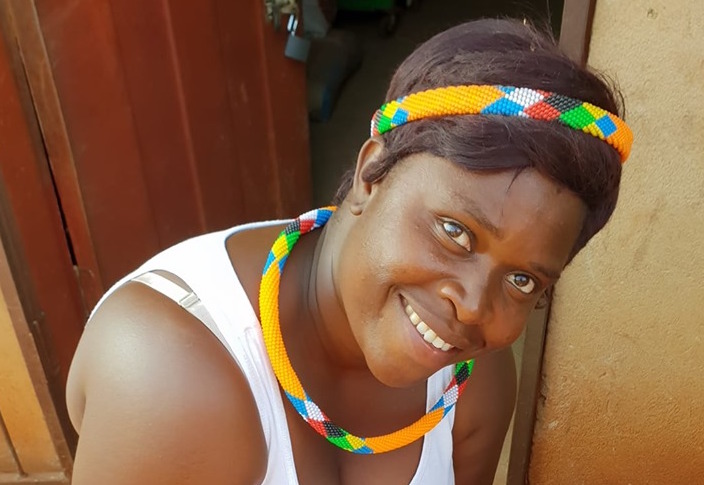 Malokisa Mukondeleli, who grew up in King Toni Mphephu Ramabalana’s royal compound at Dzanani Khoroni in Venda, says she remembers how pangolins were sometimes brought to the royal compound and gifted to the king. Photo: Alexis Kriel

In South Africa, the Temminck’s ground pangolin is available in traditional medicine markets and is promoted as a treatment for a range of ailments, including nose bleeds, headaches, heart disease, chicken pox, epilepsy, cracked heels, spiritual aliments, infertility and cancer.

Professor Ray Jansen, chairperson of the African Pangolin Working Group, has studied the ethnomedicinal and ethnozoological uses of African pangolins by traditional medical practitioners. He emphasises the need for conservation efforts aimed at educating traditional healers on the implications of unsustainable harvesting of wild pangolins – for medicine and the illegal wildlife trade – and the potential threat posed to cultural belief systems if the animals are no longer available.

“In some South African tribal societies, the pangolin is revered,” says Jansen. There is no concept of extinction in African traditional belief systems, and this can make conservation efforts difficult, he says.

The Venda and Tswana clans living in the northern regions of South Africa have special songs they sing when the animal known as “kwarra” (pangolin) is sighted, and whoever initially spots the creature is accorded special treatment by the chief and tribesmen

Malokisa Mukondeleli, who grew up in King Toni Mphephu Ramabalana’s royal compound at Dzanani Khoroni in Venda, says she remembers how kwarra were sometimes brought to the royal compound and gifted to the king.

Zwivhuya Mpho, my translator, explains further how pangolins were not allowed to be hunted – a local tradition holds that when it rains too much, the kwarra falls from the sky and whoever finds it must bring it to the king.

“No one is permitted to kill or eat the kwarra except the virgin boys and girls in the compound and the old people, or a drought will befall the land,” he says.

The “kwarra appears only when it wants to”, says Chief Rapson Davhana Matamela, explaining that a sighting is an extremely lucky occurrence. Speaking from the garden of his house in a rural village in Venda, he says he hasn’t seen a pangolin for 28 years, but still he struggles to understand that there is a poaching problem.

When shown a picture of bags of African pangolin scales confiscated in Asia, Chief Matamela reacts with shock. If anyone is caught trading in pangolins in Venda, he says, he will call the police. 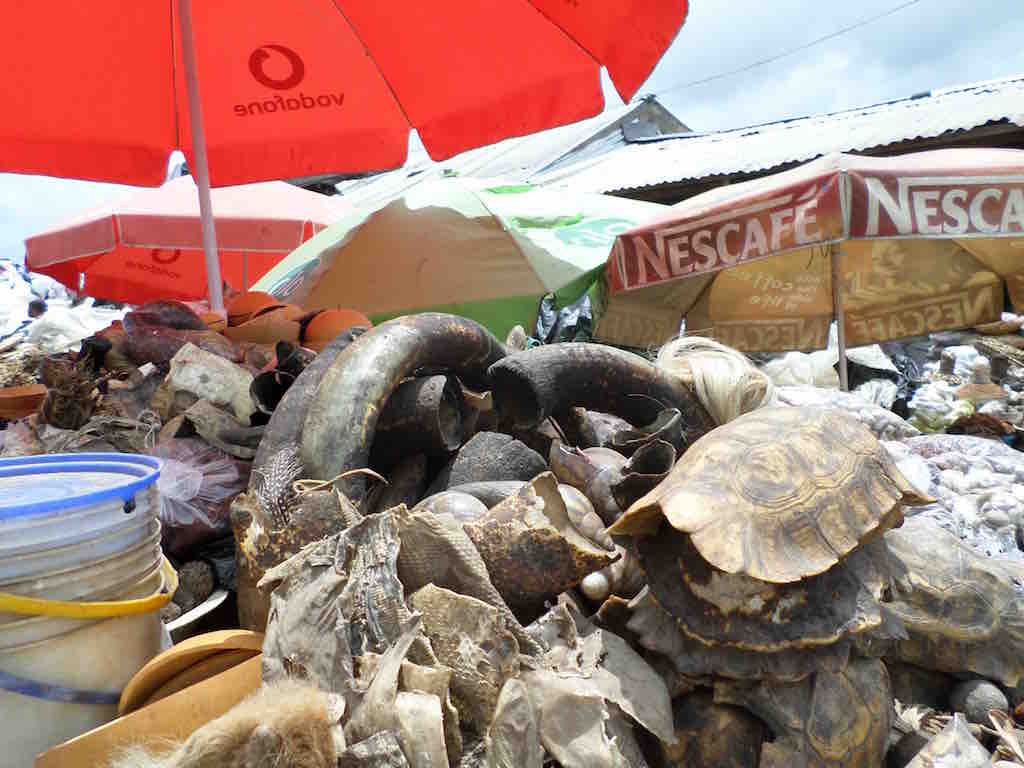 For now, Jansen believes that Western-style policing is not as powerful a deterrent against poaching as a command from tribal leaders. But their ability to influence behaviour in their communities may be diminishing among a younger generation that Jansen says has developed a “proclivity to a Western way of life and a culture of making money”. Where traditional practices are ridiculed for being “sympathetic magic” and superstitious belief, a component that has helped protect the pangolin is being lost, says Jansen.

In African countries where these animals are not revered as totems of the spirit world, they face threats from unregulated harvesting and poaching for bushmeat.

According to Dr Maxwell Boakye – a doctoral student of Jansen and the author of a study unravelling the bushmeat commodity chain in Ghana – pangolins are the most preferred wildlife species for festive meals among the wealthy in West and Central Africa and are consistently hunted.

A Nigerian businessman, Omotolani Adeyemi, says he will “never stop eating pangolins” because he loves bushmeat. He laughs when asked about the threat of species extinction.

However, it is the massive demand for pangolin scales in Asia that poses the greatest threat to the African pangolin population. In his study, Boakye also shows how rural bushmeat markets, or “chop bars”, that originally sold harvested pangolins for food are now doubling up as collection points for pangolin scales used to supply the illegal trade to Asia.

The same is true for muthi (medicine) markets, where Asian buyers are increasingly infiltrating customary outlets and local merchants are becoming trading agents.

Dr Vivienne Williams, an independent researcher at the University of the Witwatersrand who specialises in African traditional medicine, views the international wildlife trade as a multi-faceted Rubik’s cube, where solving all sides of the problem in a logical and persistent manner is necessary.

“Most conservation problems are embedded in complex socio-ecological systems, and they essentially lack clear solutions because each problem is linked to other problems,” she says. 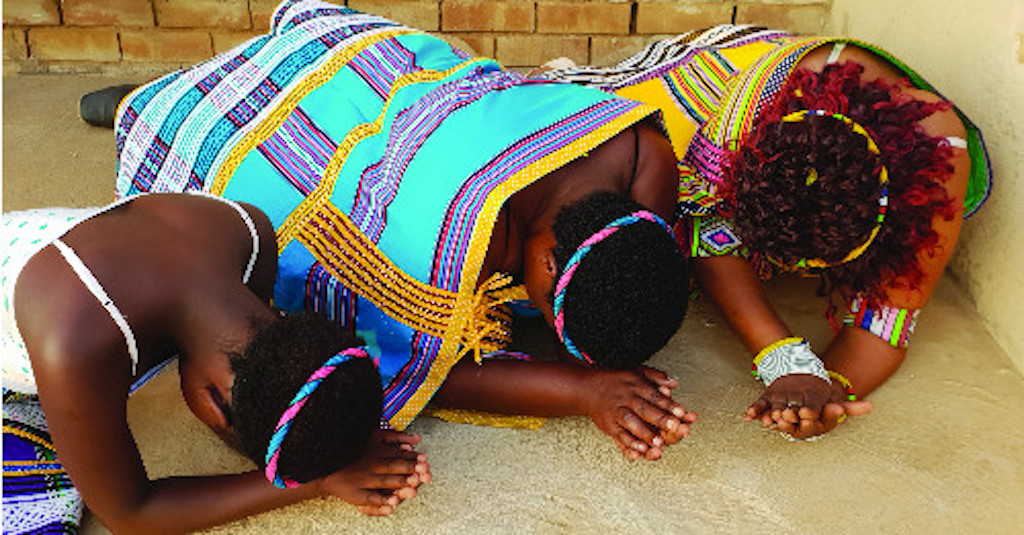 Poverty is one such problem helping drive the illegal wildlife trade. Vusi Mathe lives in a poverty-stricken rural settlement called White City in Mpumalanga, 800m from the Andover Nature Reserve, marketed by the Mpumalanga Tourism and Parks Agency (MTPA) as “an unspoiled wildlife area”.

But Mathe says extreme poverty has led the locals to hunt game in the reserve for food and he doesn’t think much wildlife is left there. “I know a lot of people who are poaching for bushmeat in the reserve because they are poor. I have never done it, but I have thought about it,” he says.

Andover is 100% under land claim, which is the restitution of land rights for the dispossessed original owners. But local residents don’t feel they have a stake in the local wildlife and tourism economy. Unemployment in the area is currently at 52%, according to the MTPA, and there are few economic opportunities outside of the reserve.

In an article published on Ranger Day in April, John Scanlon OBE, who served as the secretary-general of CITES from 2010 and is now special envoy for African Parks, points to Garamba National Park in the Democratic Republic of the Congo, where poaching is down by 98% over the past two years due to a well-trained ranger force that has created a sense of law and order and brought security and stability to Garamba and its surroundings.

“It is about securing an area for wildlife and people through well-trained rangers, who can apply law and order with the strategic use of fencing – to keep animals in and away from people and their crops – to engage with and provide decent jobs to local people and to support local enterprise via the likes of tourism and the marketing and the consumption of local produce,” he tells Oxpeckers.

Williams believes it is urgent and essential for “sites in African countries to be identified for strict protection of pangolins, with only the controlled salvage of pangolins that have died a natural death being permitted for use in traditional medicine.”

She says “non-consumptive cultural belief systems” should be supported, and communication should be fostered for amplifying African voices and finding unique solutions.

In parts of southern Africa, for example, traditional medicine practitioners only use a few grams of pangolin scale powder when dispensing to a patient, says Jansen.

“The pangolin power is used for a variety of medical or spiritual conditions and these healers do keep a few scales in their inventory of local herbs and animal body parts at any one time.” But, Jansen adds, “these scales can last a number of years due to the very low volumes dispensed.”

Alexis Kriel is a freelance journalist and projects director of the African Pangolin Working Group. Reporting for this story was supported by a special grant from Internews’ Earth Journalism Network’s Asia-Pacific Project