On the trail of Mali’s dangerous donkey traffickers 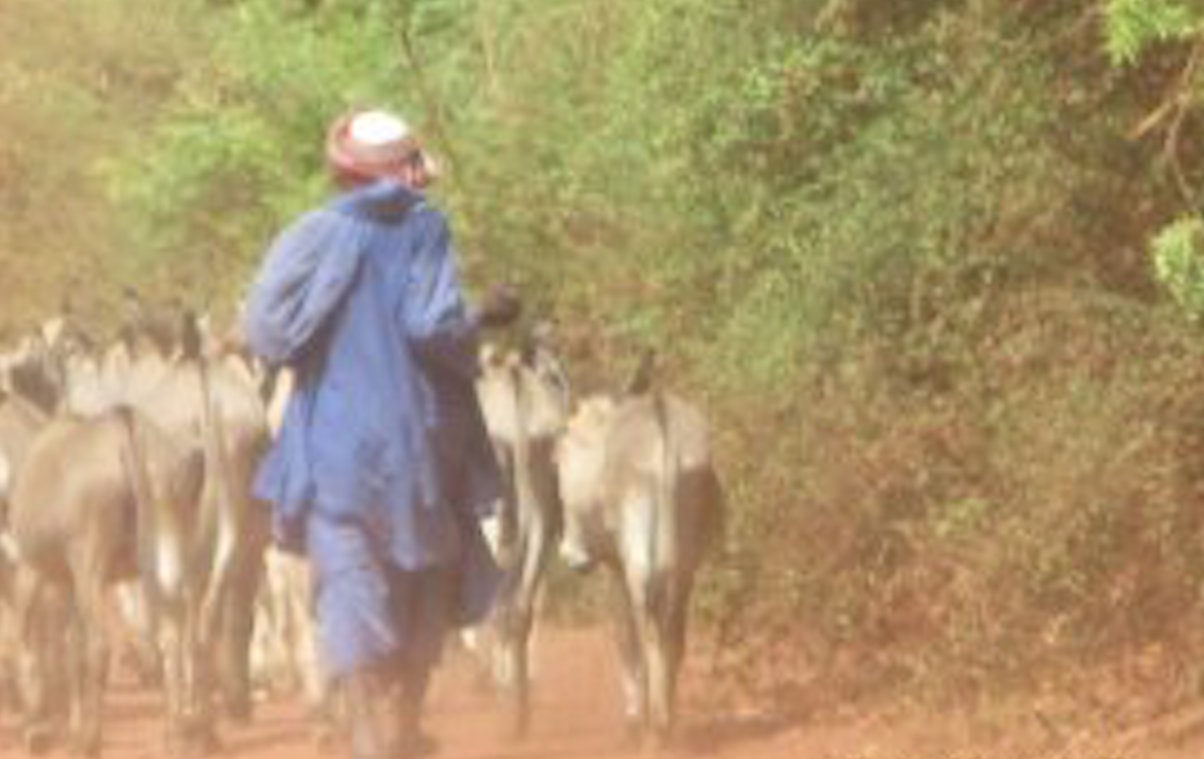 28 May On the trail of Mali’s dangerous donkey traffickers

Mali restricted the sale and slaughter of donkeys for skins in 2016, so syndicates have turned to smuggling stolen animals to Ghana. Oscar Nkala investigates

A member of a gang herds stolen donkeys along a smuggling trail from Mali into Ghana. Photo supplied

On April 27 an animal welfare activist based in the Malian capital, Bamako, was assaulted by a gang he had photographed driving stolen donkeys along one of the many smuggling trails that run from Mali through Burkina Faso to northern Ghana.

After the attack, the gang crushed the camera to ensure they left no evidence of their passage. However, the attempt to destroy evidence failed because a back-up cameraman succeeded in taking pictures of the gang and the stolen donkeys.

Although the attack was reported to police, donkey welfare activists are not surprised that no arrests have been made yet. The case highlights the difficulty of fighting Mali’s underground donkey skin trade, and partly explains why it is thriving four years after it was restricted.

“Mali restricted the sale and slaughter of donkeys for skins and meat in 2016, but the trade did not stop. From killing the donkeys inside Mali, the syndicates simply shifted to smuggling Malian donkeys out to Burkina Faso and Ghana to slaughter there,” said Issiaka Konate, head of ARAF-Plateau Dogon, a donkey welfare organisation based in the town of Segou.

“It is dangerous to oppose the donkey trade in Mali. Animal welfare defenders fear for their security. The attack on the activist proves that these fears are not unfounded.”

According to Konate, cross-border donkey trafficking gangs operate throughout Malian municipalities close to the border with Burkina Faso. The trade is usually conducted by a mix of Ghanaian, Malian and Burkinabe nationals.

“They steal the donkeys by night. Some raid in broad daylight. They consist of several men, sometimes armed with automatic weapons to fend off the police or rival gangs.

“From Mali, the donkeys are smuggled into Bobo-Dioulasso in Burkina Faso and driven by foot to the southern border. With the help of border communities there, they are driven into Ghana and sold off as Burkinabe-stock,” he said.

This way, he estimates that more than 800 donkeys are trafficked monthly from places like Mopti, Segou, San, and Tominium in central and southern Mali to Ghana through Burkina Faso.

Efforts to get comments from the Malian government and veterinary services on this cross-border trade failed due to the pervasive climate of fear in the country. Activists on the ground said they could not share official contacts because all phones in the country are tapped by the security services.

“In Mali it is not advisable to share personal phone numbers without the authority of the individuals concerned. I wish I could help but with all this insecurity, all calls to Mali are tapped,” said one activist who declined to be identified for fear of victimisation. 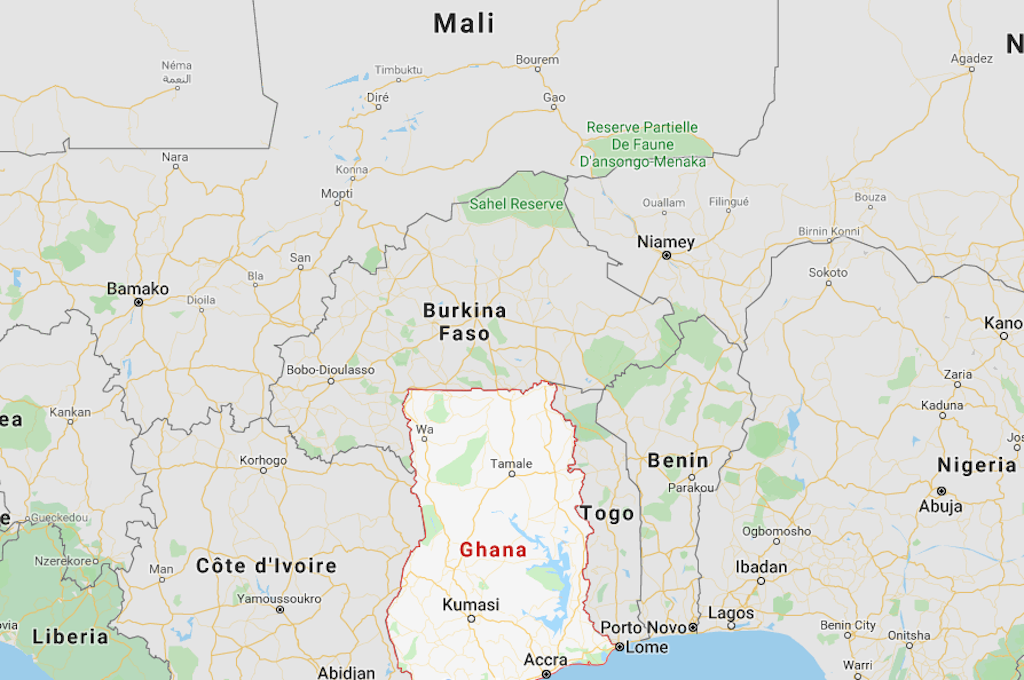 With the complicity of the Bisa ethnic group on both sides of the border, the smugglers often drive donkeys stolen from Ghana’s northern neighbours without going through any official checkpoints. Courtesy Google maps

The Upper East regional capital Bolgatanga, which is home to the busiest donkey market in northern Ghana, lies only 40km from the border with Burkina Faso.

With the complicity of the Bisa ethnic group on both sides of the border, the smugglers often drive donkeys stolen from Ghana’s northern neighbours to the market in Bolgatanga without going through any official checkpoints.

Every Sunday, Tuesday and Friday, Ghanaians converge at the Bolgatanga open livestock market to replenish their donkey herds. Some even come from as far as Accra in the south to buy livestock for meat.

Inside the market, Burkinabe traders shove and argue over customers. With ropes tied around the necks or hooves to restrict their movement, donkeys are auctioned off with huge discounts for buyers seeking more than one animal.

Burkinabe trader Alexious Frafra told Oxpeckers Investigative Environmental Journalism that most donkeys sold in Bolgatanga are stolen from Mali and Burkina Faso. Due to high demand and its powerful currency, Ghana remains the top regional market for donkeys in West Africa. (See The donkey slaughter capital of West Africa.)

“Most of the donkeys here come from Mali, but people generally think they are from Burkina Faso because they come via Burkina Faso and are sold by Burkinabes. But no, some even come from Senegal.

Frafra used to work for a cross-border theft syndicate that supplied the Blue Coast Abattoir in Walewale in northern Ghana with Burkinabe, Malian and Senegalese stock. After “retiring” from the syndicate, he became a merchant in 2018 and said most of his stock still comes from his old connections in the syndicates.

“Most traders here know and work with thieves from Mali, Burkina Faso and Senegal since Ghanaians do not sell donkeys anymore. They only come here to buy.

“There is never any documentation to prove the source of the donkeys because from Mali and Senegal up to Ghana, the syndicates don’t use designated entry and exit points,” he explained.

Three types of Ghanaian buyers throng the thrice-weekly donkey market in Bolgatanga. These are northerners who buy to restock, some southerners who slaughter for meat and syndicates believed to be linked to underground donkey hide trade barons in the capital Accra.

“People linked to hide-dealing syndicates of Ghanaians and Burkinabes buy donkeys to slaughter in the bush. They do it under the cover of slaughtering for meat at family gatherings, festivals and other celebrations.

“But in reality they are only after the hides, which they sell to local middlemen acting on behalf of Chinese syndicates based in Accra. The meat goes to cities like Kumasi, Takoradi and Accra to be sold as bush meat.”

Impacts of the skin trade

Amadu Hudu, director of the Development and Environmental Protection Organisation in Ghana (Donyaepa), said the resilience of the underground donkey trade in northern Ghana is a legacy of four years of plunder of local donkey populations by Blue Coast Abattoir, owned by Chinese trader Nicholas Liu.

Blue Coast shut down operations after a directive from Ghana’s Veterinary Services Directorate in January 2017 restricted permits for the movement, slaughter and export of donkeys, but Liu has recently started re-building the abattoir. (See The donkey slaughter capital of West Africa.)

“Some telling legacies of that abattoir include the obvious scarcity of donkeys and the feeling of utter loss and deprivation that becomes apparent when you talk to all whose lives were touched.

“Its biggest legacy was to plant a culture of donkey theft and plunder. Attitudes have changed, and people don’t see donkeys only as working animals anymore. They see them as quick cash,” Hudu said.

Donkeys sold into the hide trade in Africa are often treated cruelly throughout the transportation and slaughter processes, international equine welfare organisation SPANA said in an assessment released in January this year.

The organisation noted Chinese profiteers had turned to Africa after slaughter of China’s donkey populations for donkey-hide glue, or ejiao, had reduced its own donkey population from 11-million in 1990 to 5.4-million in 2016.  Ejiao is packaged and marketed as a treatment for various old age-related ailments.

“This trade is having a significant impact in a number of countries where SPANA works – for instance, Botswana’s donkey population decreased by 38% in two years,” the organisation said.

Oxpeckers’s investigations in various Southern, East and West African countries have shown that donkeys are critical to the livelihoods of many poor communities. In central and southern Mali, up to 2,000 donkeys are still sold at livestock markets a month for domestic uses such as ploughing, hauling loads and transporting water.

The increased demand for skins has raised the price of the animals by up to four times, making them unaffordable and incentivising rampant theft.

To close down the illegal donkey meat and hide trade, the Ghanaian government must enforce border controls along the borders with Mali, Senegal and Burkina Faso, Donyaepa’s Hudu said.

“Donkeys in West Africa can still be saved, but only if Ghana enacts and enforces laws to stop the smuggling and trading of stolen donkeys in the country.”