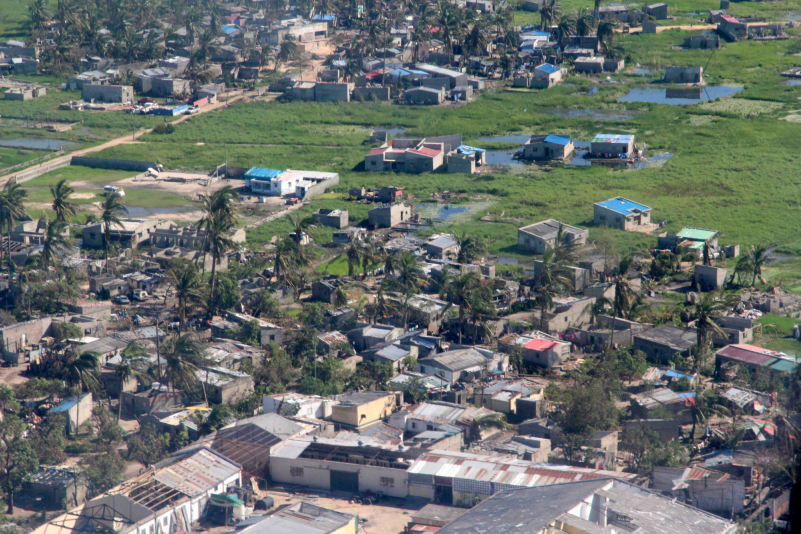 What was once a forest in Missica, in Chimoio in northern Mozambique, now looks like an endless series of empty football fields. Cyclones are destroying hopes for harvests in Beira, Zalala and Lugela in Zambeze.

In Marromeu National Reserve hungry and thirsty buffalos, hippos and monkeys roam through villages, eating meagre food supplies. Villagers in Massingir district in the south complain that in the past three years more than 1,000 cows have died due to drought and extreme heat.

Once-lush Manica, like Massaca, is now also barren – in this case due to timber cutting and careless gold mining – with the river running red from the mining chemicals. The recent cyclone Idai in Beira has destroyed what was left standing after earlier floods; malaria mosquitoes and cholera thrive in the puddles.

In these villages and landscapes tormented by climate change, drought and rapacious resource exploitation, civil society organisations try to stem the tide. NGOs and activists in all of the above locations try to combat the spreading misery by planting trees and distributing biomass so that villagers can cook without having to use wood. They also protect bodies of water and organise community organisations to fence off the intruding wild animals.

However, their activities are hampered and in many cases completely stopped because a dedicated United Nations fund that allocated grants to 45 out of 58 such projects between 2013 and 2015 simply has not transferred the money. 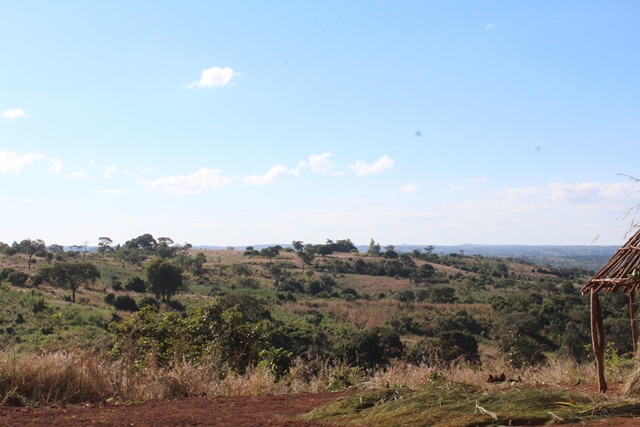 Green desert: In Gaza province in the south, with dry fields as far as one can see, at least 10 projects should now be planting trees and starting community farms

The GEF Small Grants Programme (SGP) of the United Nations Development Programme (UNDP), equipped with millions of dollars for precisely such activities, was a beacon of hope for many community associations in Mozambique.

The SGP website says that it provides grants of up to US$50,000 “directly to local communities”, for projects that “conserve and restore the environment while enhancing people’s well-being and livelihoods”.

But out of the 58 NGOs that had been elated when their  projects were approved during a 2013 application round, 13 received funding. The remaining 45 are still labelled “Memorandum of Agreement (MoA) to be finalised and signed”, or  “project to start soon (MoA signed)” on the website, with no indication of the grant having been paid.

Twenty-six of the organisations contacted on location, and seven who were interviewed by telephone or email, confirmed that they had repeatedly asked for the funds transfer but had failed to receive answers from the SGP country managers, Paula Boene and Augusto Correia.

The places where the projects were supposed to have been implemented consequently have little to show for the programme’s good intentions.

In Gaza province in the south, with dry fields as far as one can see, at least 10 projects should now be planting trees and starting community farms. Driving from Chimoio into Macati, crossing Massaca, where other projects should have been doing the same by now, there is also not a new tree to be seen.

The NGO Kulima in Metuge, near Pemba in the North, was to fight land degradation and support local communities to obtain better harvests, with additional activities around HIV/Aids awareness and prevention, and voter education.

“Even though we were at the approved stage, we never reached the ‘green’ stage of actual grant reimbursement. We can’t get any information. We are so disappointed,” says Kulima’s Domenico Lizzi. There is a sigh and silence before he hangs up the phone, saying “I no longer want to talk about this.” 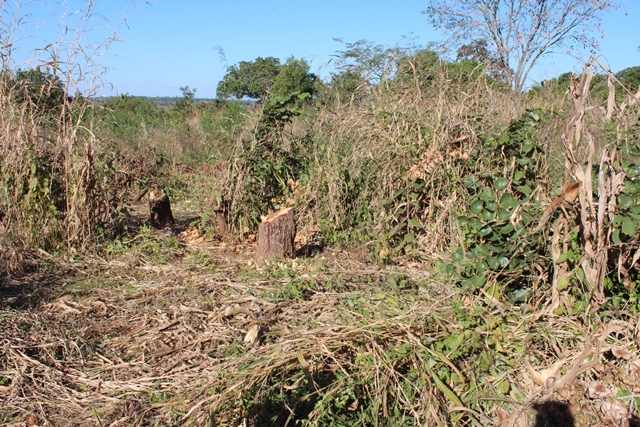 The story is the same in Ponta d’Ouro on the South African border. Tania Perreira of the NGO Centro Terra Viva (CTV) narrates how their maritime project would have trained villagers in environmental conservation and the protection of the sea tortoises that attract a lot of tourists.

Even though the project was approved in July 2015, with the papers supposed to be signed in that same month, CTV is still waiting. And even though CTV’s headquarters are in Maputo, not far from the SGP/UNDP offices, Perreira hasn’t been able to get any answers from the UN agency either.

“Signing the Memorandum of Agreement was the only thing missing for funding reimbursement. But to date we couldn’t get it signed, with no response from the SGP to any of our communications,” she said.

In Chimoio, the environmental organisations Batsirai, Rio Tembwe and AMOR, which also tried for years to communicate with the UNDP after the approval of their projects, got nowhere even when provincial environmental department director, Tomas Mujui, tried to help.

“As a province we are aware that these projects were approved in 2013. They should have been funded by now. I raised my concerns with Paula Boene, but she told me to mind my own business and that the SGP would be dealing directly with each organisation,” said Mujui.

It is, however, precisely in the contact between the SGP and the organisations that the problem lies. Several interviewed NGO representatives say that, whenever they did succeed in speaking to the fund managers’ office, the responses have mostly been “rude” and “dismissive,” with calls often dropped.

The Sustainable Development Association (ADS) in Niassa, that had wanted to plant trees, fight bush fires and create alternative employment for locals who now mostly hunt wildlife, recently received a response to the queries they had raised for years after their grant failed to materialise, but it wasn’t what they had expected.

Instead of receiving the promised US$14,908, they were now suddenly told that the project was “closed”.

“I am actually disgusted,” said ADS coordinator Sabite Salimo, adding that he is “starting to wonder if the money that was meant for us had been diverted, laundered or used for other purposes”.

ADS’s project is still labelled “currently under execution” on the SGP website.

Waiting to be active

According to the UNDP SGP’s Annual Monitoring Report 2017-2018, a total of US$600-million grants have been provided to more than 22,000 projects in 125 countries since its launch in 1992. Out of these 22,000 projects, according to the SGP online database and confirmed by the Mozambique country office, the SGP has provided grants to 273 projects in civil society and community-based organisations in Mozambique since 2005.

The SGP’s overall grant commitment in Mozambique is stated to have reached US$5.4-million, with an additional US$3,7-million co-financing from other parties, amounting to about US$10-million that should have been spent in Mozambique since 2005.

An analysis of the 273 Mozambican projects listed on the GEF SGP’s own online database in early December 2018 showed, however, that more than one-third of the approved grants remain uncompleted.

According to the Annual Monitoring Report 2017/18 of the UNDP Country Office in Mozambique, the UNDP itself is well aware of the problems with the SGP programme: “After a temporary stall in 2011, the implementation of the SGP in Mozambique melted down: the completion rate falls off the cliff to merely 13% in 2015 and remains low at around 40% in 2014 and 2016; 11 out of the 30 projects approved in 2015 remain at the status of ‘not active yet’,” the report says.

Chimoio provincial environmental department’s Tomas Mujui said: “The same thing  happened in the 2015 call for proposals: again the projects did not get their money and again the fund managers refused to interact with me.” 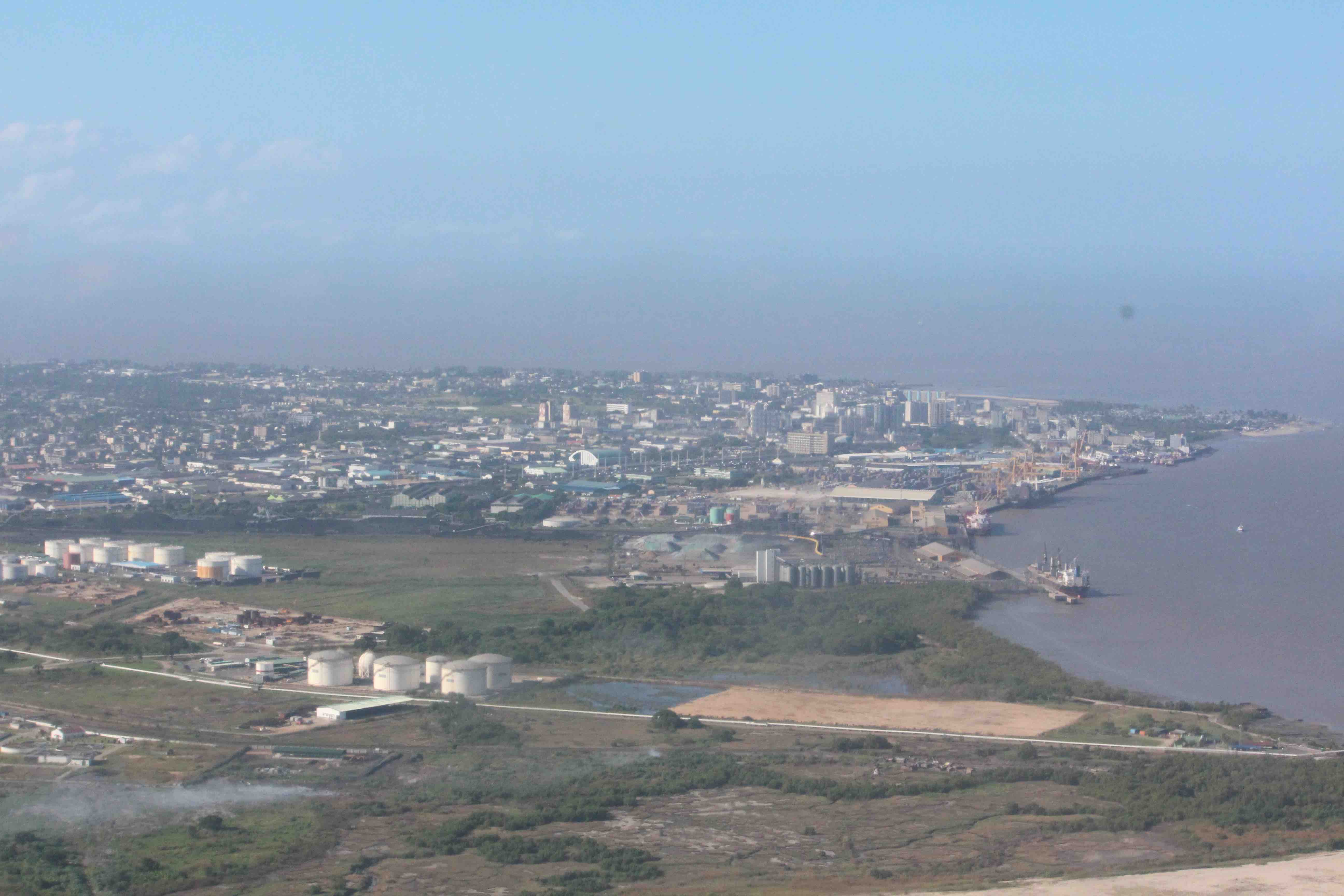 The way things were: Beira before cyclone Idai flooded the coastal city in March 2019

Not entirely up to date

Maputo-based UNDP communications manager Luis Zaqueu, in a right to reply on behalf of SGP programme coordinators Paula Boene and Augusto Correia, said the website “might not be entirely up to date”, and that “additional time [would] be required to look into the actual grant agreements and associate reports, to determine the status of these projects”.

He maintained that “all project milestones (of the active projects) are completed, including financial instalments in accordance to the Memorandum of Agreement”.

The label “not active yet” means that “though approved by the national steering committee and (with) a Memorandum of Agreement prepared, funds are yet to be disbursed pending completion of required procedures, including creating a bank account, and registration of civil society and community-based organisations as a legal entity,” he said.

The delays may be caused by faults on the recipient organisations’ side, he said, “considering the often limited capacity of the [civil society organisations] in implementing projects and understanding that sometimes they cannot complete the projects according to the stipulated timeframe of the project document.”

Several interviewed organisations will have none of this. The suggestion that they may not have complied with bank account and legal registration rules was rejected roundly by Tomas Mujui in Chimoio, who said he was aware that the three organisations in his province submitted all the necessary details.

Tania Perreira of CTV and Domenico Lizzi also confirm having filled in all the needed forms.

Sabite Samilo of ADS still has all the details about his Niassa project submission at his fingertips: the project “Climate change and conservation in Niassa-Lichinga” was approved for a budget of US$14,908,91 in 2013.

“But on May 22 2017 the UNDP requested from us our association’s name and bank account number and SWIFT code again,” he said. It was after that communication that they received a call to inform them their project was “closed”.

One without the other

Vanessa Cabaladas, the chief coordinator of  Maputo-based Justiça Ambiental’s Land, Life and Ecosystem programme, said it is “problematic  to have an organisation wait for guaranteed funds and then [tell them] nothing. I cannot understand how the SGP/UNDP can work this way.”

Mozambique WWF director Anabela Rodrigues added: “The website should be clear about contracts and grant disbursements. You can’t have one without the other. This is very strange. I do think that this requires an explanation from the UNDP.”

This investigation was published by ZAM here, and was developed with the support of the Money Trail Project