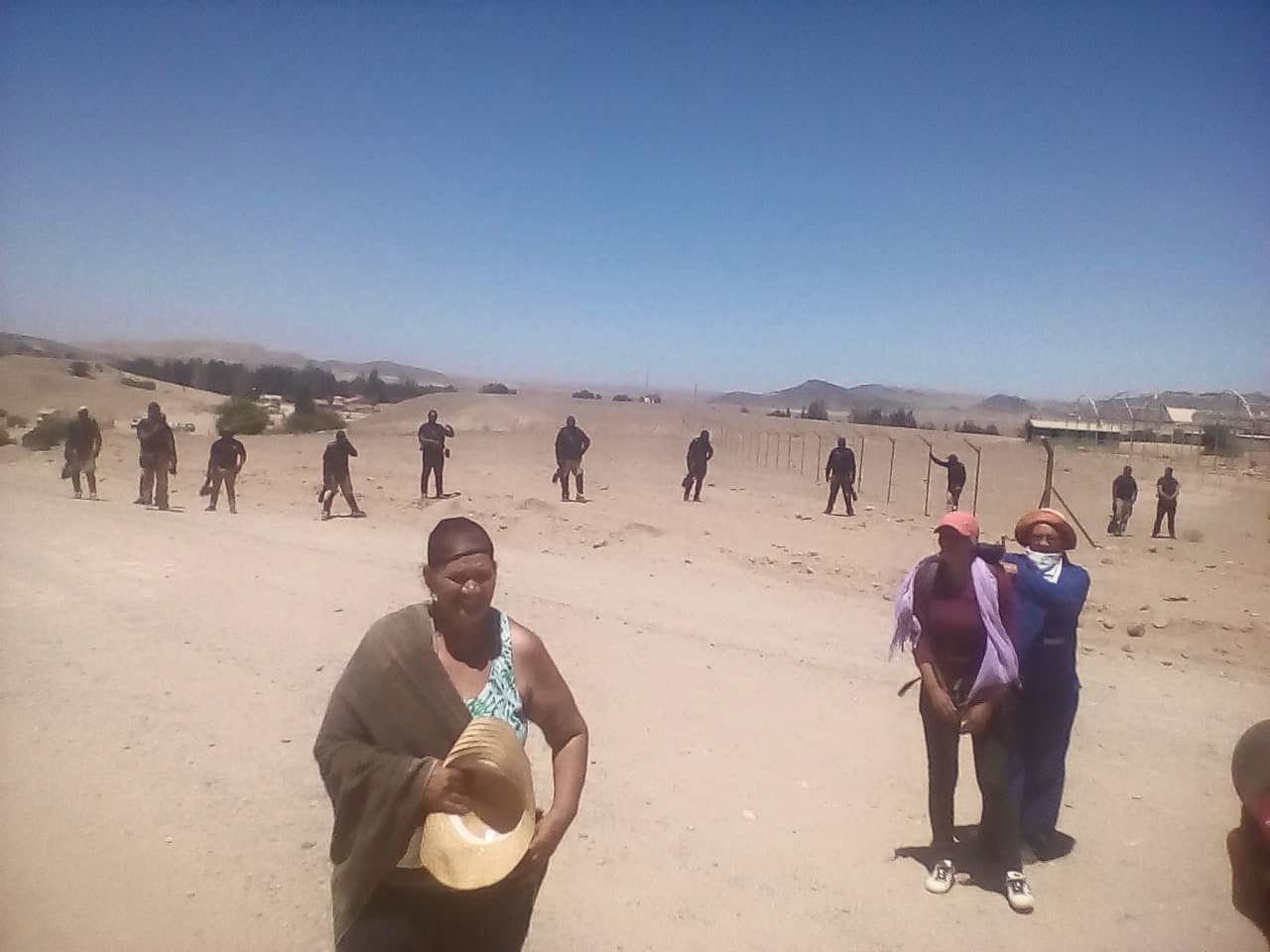 Tensions are mounting in the diamond-rich Richtersveld after the sale of mines by Trans Hex left behind a multi-million-rand rehabilitation debt. Yolandi Groenewald investigates Scraping the surface: A R95,7-million rehabilitation fund set up to fix the damage caused by 50 years of diamond mining in the environmentally sensitive Richtersveld is a drop in the ocean of what is needed to restore the area. Photo: sourced

Communities in the diamond-rich Richtersveld in the Northern Cape are up in arms about the sale of mines along the banks of the Orange River to a junior mining company, leaving behind a multi-million-rand rehabilitation debt that they believe will never be met.

A R95,7-million rehabilitation fund set up to fix the damage caused by 50 years of diamond mining in the environmentally sensitive Richtersveld is a drop in the ocean of what is needed to restore the area, according to local community members.

Since the sale tensions have been mounting, amid community claims on the land being mined, the mineral right and the mines themselves. Fears that the Richtersveld residents will be left to clean up decades of environmental damage are adding further strain.

“The community is genuinely worried about whether the environmental obligations will be met,” said the community’s lawyer, Henk Smith.

The mineral right that Trans Hex sold overlaps with about 8,700ha of the Richtersveld National Park. South African National Parks (SANParks) says illegal mining started inside the park after the sale, posing serious security threats to staff and visitors, and adding further environmental degradation to the “already barren and pressurised riparian ecosystem”. 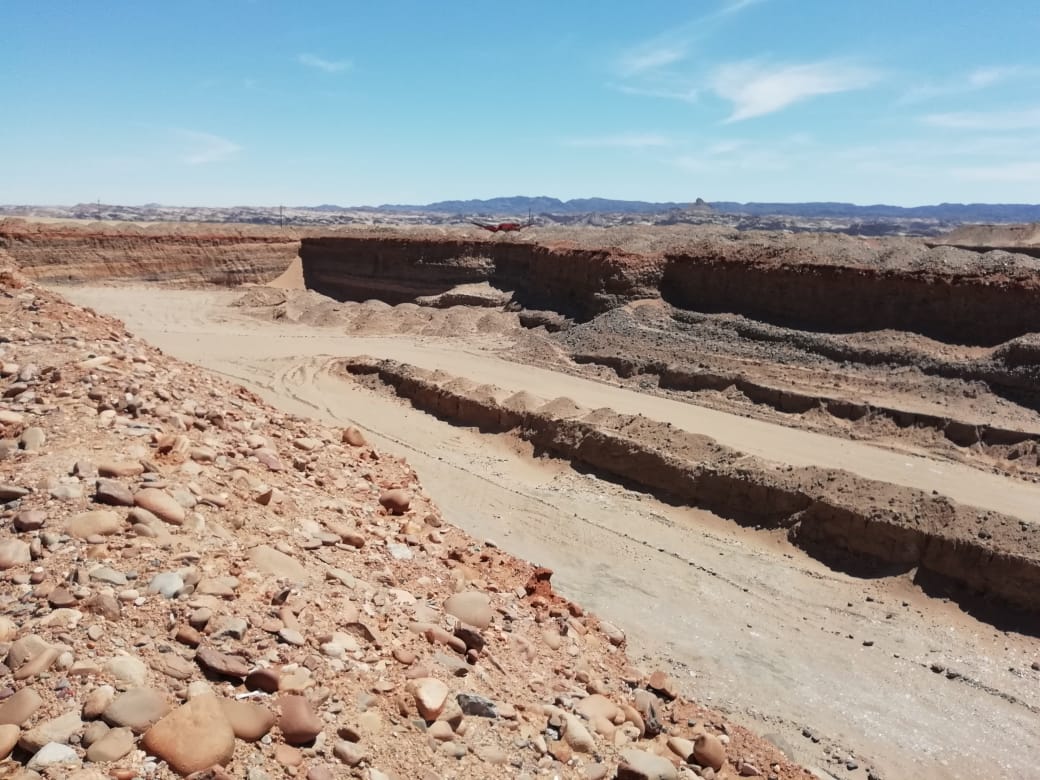 Mega trench at Bloeddrif mine: A mining contractor told Oxpeckers the cost to rehabilitate the trenches could be around R800-million. Photo: supplied

Not enough in the kitty

Worries started to mount after Trans Hex subsidiary Trans Hex Operations sold its ageing Bloeddrif, Baken and Reuning mines to Lower Orange River (LOR) Diamonds for R72-million cash. In a statement at the time Trans Hex said LOR had a management team with “extensive knowledge of and experience in the diamond exploration and mining industry but is not currently engaged in other diamond mining operations”.

Ayanda Shezi, spokesperson for the Department of Mineral Resources (DMR), told Oxpeckers the R95,7-million held in a trust fund for rehabilitation of the mines was not considered sufficient and that the new owners would have to fork out the difference after the mines close.

According to Smith, officials from the department have estimated the existing rehabilitation liabilities at about R133,7-million, but this figure does not reflect the reality on the ground and the real cost may be as much as R192-million.

“The mega trenches are very deep and extend over several hectares,” Smith said. “It will literally cost millions and millions to rehabilitate them.” Local mining contractors estimate it will cost R600-million to begin to rehabilitate the land to an acceptable standard, he said.

David Pells, a mining contractor who advised the community, told Oxpeckers he believed the cost could be around R800-million. “You should see the unbelievable mega trench at Bloeddrif mine. How do we get a proper quantum on rehabilitation?” he said. “I believe it costs about R200,000 a hectare to rehabilitate and the mining lease area is about 40,000ha. You do the math.”

Smith wrote in a letter to the DMR that “LOR Diamonds do not have a track record with mining rehabilitation work that addresses our clients’ legitimate expectations and concern.”

Previous investigations by Oxpeckers into mine closures showed that very few large mining companies in South Africa apply to close mines legally, and that the money set aside for environmental rehabilitation is rarely used. In the Northern Cape at least R2,5-billion is held in financial provisions for mine rehabilitation. 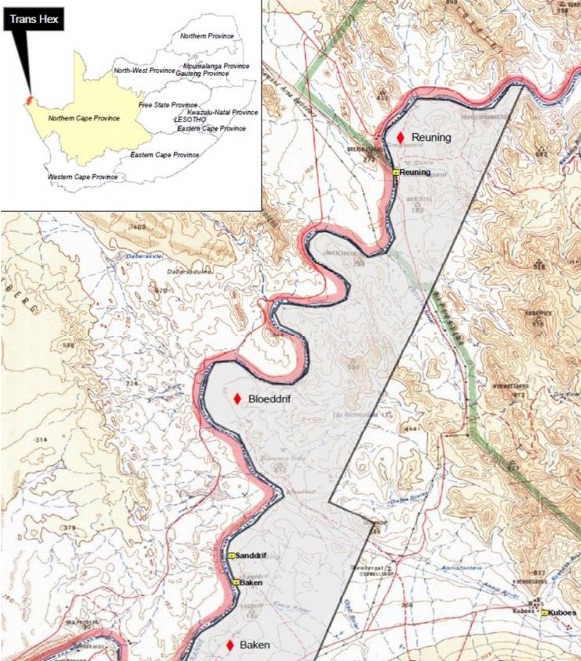 A trend exposed in the investigations was that big companies often sold mines to smaller companies that struggle to bear the responsibility of the environmental liabilities.

Shezi said the shortfall in the rehabilitation fund would have to be provided by LOR Diamonds before the transfer of the mineral right to LOR is authorised by the department. In the meantime, LOR is mining as a contractor of Trans Hex.

The Richtersveld community, which successfully lodged a land claim against state-owned diamond mining company Alexkor 11 years ago, has lodged a claim on the land that LOR Diamonds is now mining.

The community, with Smith advising, is also lodging a claim for the mineral right to be transferred to the community. Shezi said Trans Hex still holds the right until consent is granted by the minister to transfer it to LOR Diamonds.

Mining takes place inside the borders of the Richtersveld National Park, a contractual park owned by the local communities and managed by SANParks, and mine dumps scar the park from the entrance gate to Sendelingsdrif camp. The Reuning operation is situated inside the park.

A valuation done by Snowden Mining Industry Consultants for Trans Hex listed the three mines’ environmental risk as medium to high, saying there was a potential shortfall in the closure costs of the mines. “Lower Orange River mines’ environmental liability is material, with the majority of LOR operations on care and maintenance for more than six months,” it said. 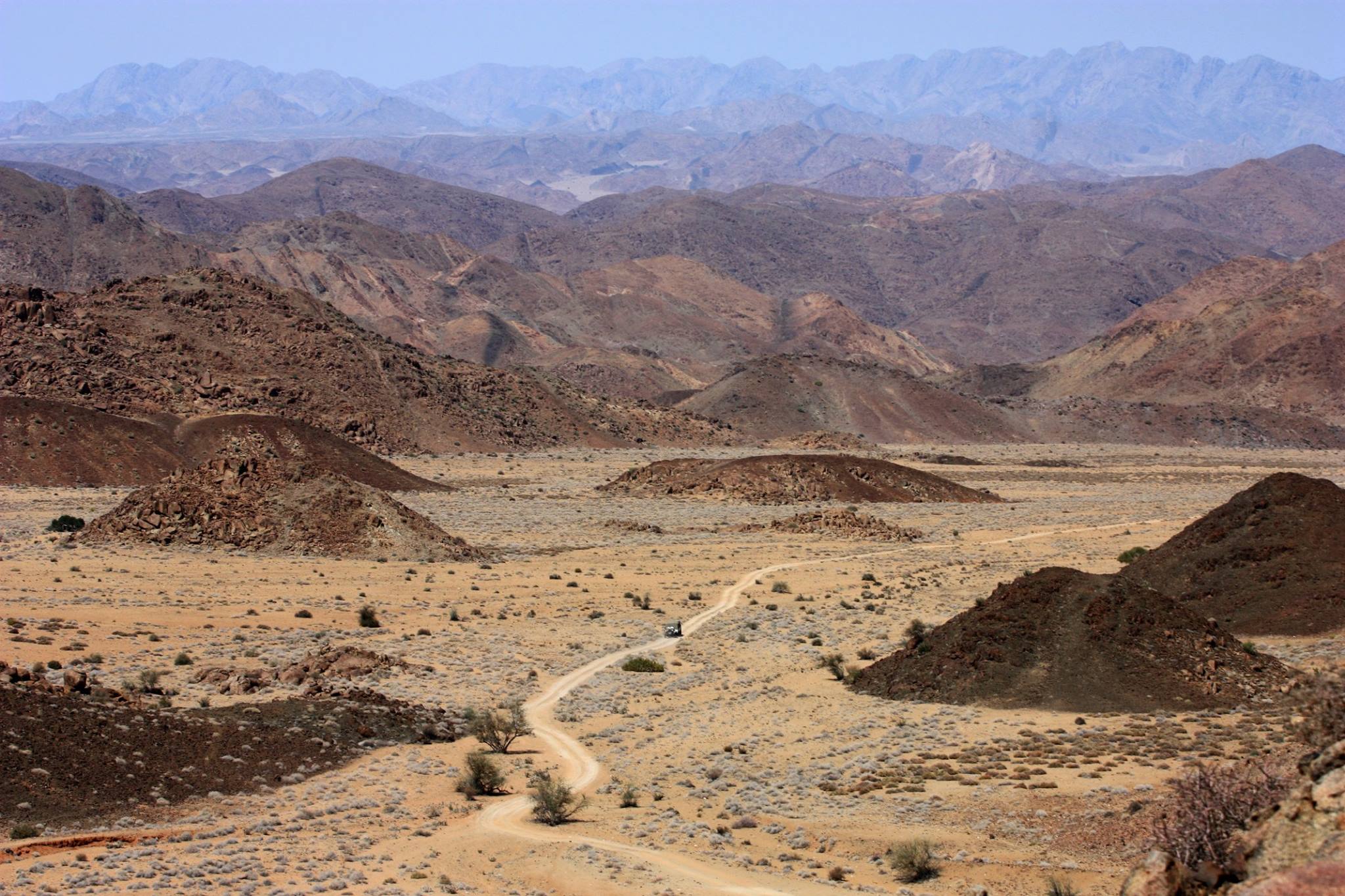 Sensitive environment: Mining takes place inside the borders of the Richtersveld National Park, a contractual park owned by the local communities that is part of a transfrontier conservation area. Photo: SANParks/FB

Comfortable with the legacy

The majority shareholder of LOR Diamonds is Nathiera Kimber, whose husband, Chris Kimber, has been active as a junior miner in the Northern Cape for the past decade. Nathiera has a legal background as a lecturer at the University of the Western Cape, and has worked in several companies as a corporate lawyer.

Chris Kimber, who heads up operations at LOR Diamonds, said despite the environmental concerns the company is “comfortable” with “taking on this legacy” and that he believed there were enough funds in the trust to cater for rehabilitation.

Kimber said Trans Hex had commissioned an independent study on the mines’ rehabilitation.

“This document included the quantification of the rehabilitation quantum and was submitted by Trans Hex to the DMR,” he said. “LOR has engaged with the authors of this study and in conjunction with them has incorporated many aspects of their study into the updated environmental management plan.”

Several community members told Oxpeckers they are still waiting to see this new plan and said little work has been done to rehabilitate the sky-high mine dumps rising above the gravel roads of the Richtersveld. 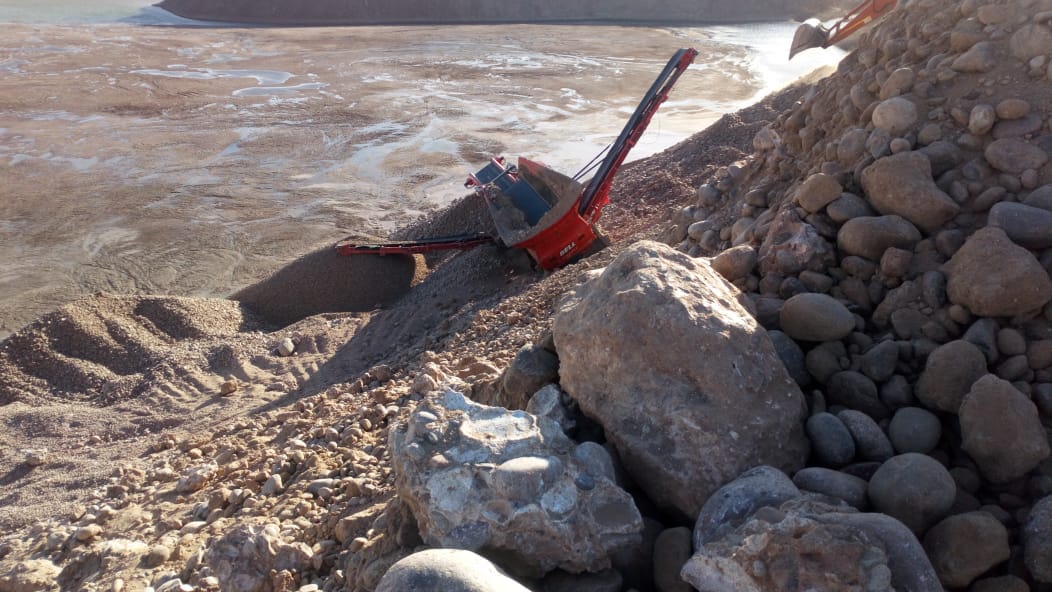 Riparian zone: LOR Diamonds won support for its bid by promising new mining techniques and recovery processes at the mines, as well as an innovative environmental rehabilitation process for the disturbed surface areas. Photo: sourced

Care and maintenance, when unprofitable mines are warehoused, has often been used to postpone the proper closure of mines, postponing rehabilitation indefinitely, said Catherine Horsfield, the Centre for Environmental Right’s mining programme head. She called it “a gateway to abandonment” in Oxpeckers previous mining rehabilitation investigations.

A skeleton staff operated the mines until LOR Diamonds bought them. Kimber said the sale came about after the Minerals and Petroleum Board advised Trans Hex to implement certain corrective measures which included “to allow continued mining by a third party company, such as a contracting company, which has a different cost structure to the mining right holder”.

The sale was welcomed by some, including the department, for breathing new life into the mines in an area where jobs are scarce. While the mines were under care and maintenance, there was also no deadline on when the mines would be closed and rehabilitated.

LOR Diamonds won support for its bid by promising new mining techniques and recovery processes at the mines, as well as an innovative environmental rehabilitation process for the disturbed surface areas. Trans Hex said in a memo it was confident the sale would be both cost-effective and sustainable.

“Mining by its very nature has an impact on the environment in the short term,” Kimber said. “Responsible mining can reduce this impact. Our mining methods allow us to merge current rehabilitation and legacy rehabilitation into one synchronised process, further reducing the impact.”

LOR uses the traditional pan and water method of mining, along with X-Ray technology to identify the diamonds. This is more environmentally friendly than using ferrosilicone to separate diamonds as Trans Hex had done, Kimber said.

Whereas previously all material was taken to a central plant for processing, he said, “we do the majority of processing in field with continuous rehabilitation. Rehabilitation is part of the mining process. This reduces the amount of material transported by up to 70%.”

Serious concern: Sporadic violence has erupted at the mines in recent months, and LOR has tightened security in response. Photo: Richtersveld Nuus/FB

LOR Diamonds has not had an easy time, with tensions rising in the local community over job losses, contractor appointments and illegal miners moving into the area. Sporadic violence has erupted at the mines in recent months, and LOR has tightened security in response.

In a letter to Trans Hex last December, SANParks chief executive Fundisile Mketeni asked the company to assist in dealing with the “uncontrolled illegal small-scale diamond mining inside the national park”.

The sale to LOR Diamonds had sparked an invasion of illegal miners, Mketeni said, and “the situation has become a serious concern”. After several stand-offs between security personnel and armed and “aggravated” illegal miners, SANParks had withdrawn from confronting the miners and was concerned about the impacts they were having on the riverine habitat.

“Indigenous trees are cut down for firewood at an alarming scale… The sifting of gravel results in heavy metals and sediments washed directly into the river. The production of litter and other waste debris discarded in the field are of huge concern,” he wrote.

Oxpeckers sent detailed email questions to the Trans Hex spokesperson about the mines’ environmental legacy and the rehabilitation fund, but Trans Hex failed to respond. – oxpeckers.org