Namibia starts controversial hyena cull to save its wild horses 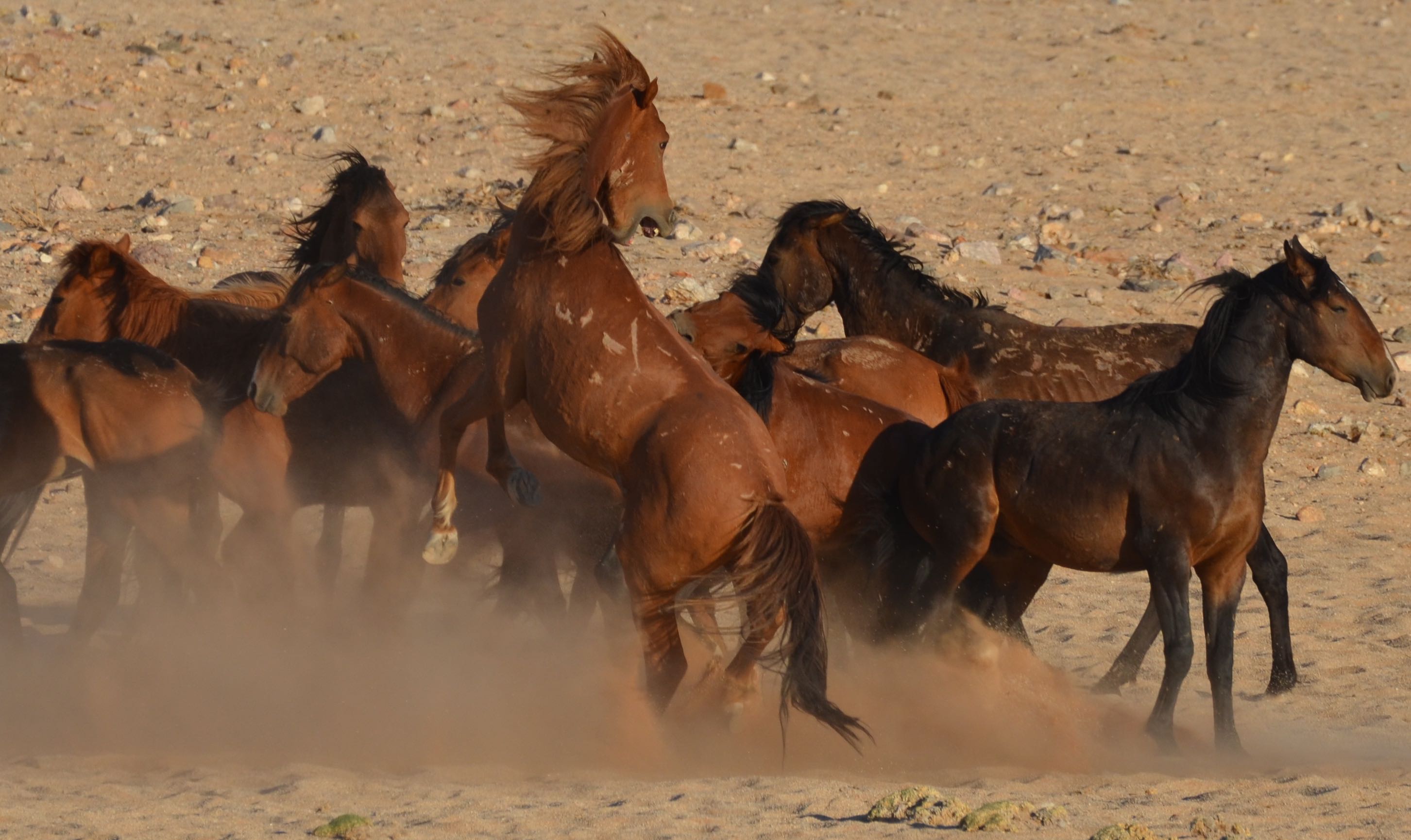 A long-running battle between the desert-dwelling wild horses and hyenas, which share a single water point in the arid southern Namib-Naukfluft National Park, reached a crisis point as horse numbers plummeted recently from 286 to only 77 remaining animals.

“We are now in the final hour of the wild horses’ existence on the planet,” the Namibia Wild Horses Foundation warned in early February. It called on the Ministry of Environment and Tourism (MET), custodian of both the hyenas and the horses, to take immediate action to save the horses from extinction.

An international social media frenzy joined the call, with articles, petitions and debates about the plight of the horses. Minister of Environment Pohamba Shifeta is due to join representatives of the foundation and the Namibian Environment & Wildlife Society (NEWS) at a public debate titled “Are horses more important than hyenas in our national parks?”, scheduled to take place in Windhoek on Thursday, February 28.

The only remaining foal in the park was attacked and wounded by hyenas last week, with gruesome images of its injuries circulating on social media. Two attempts to catch and translocate the hyenas proved futile, prompting the MET to shoot three hyenas, including a large female thought to be the main cause of foal mortalities. 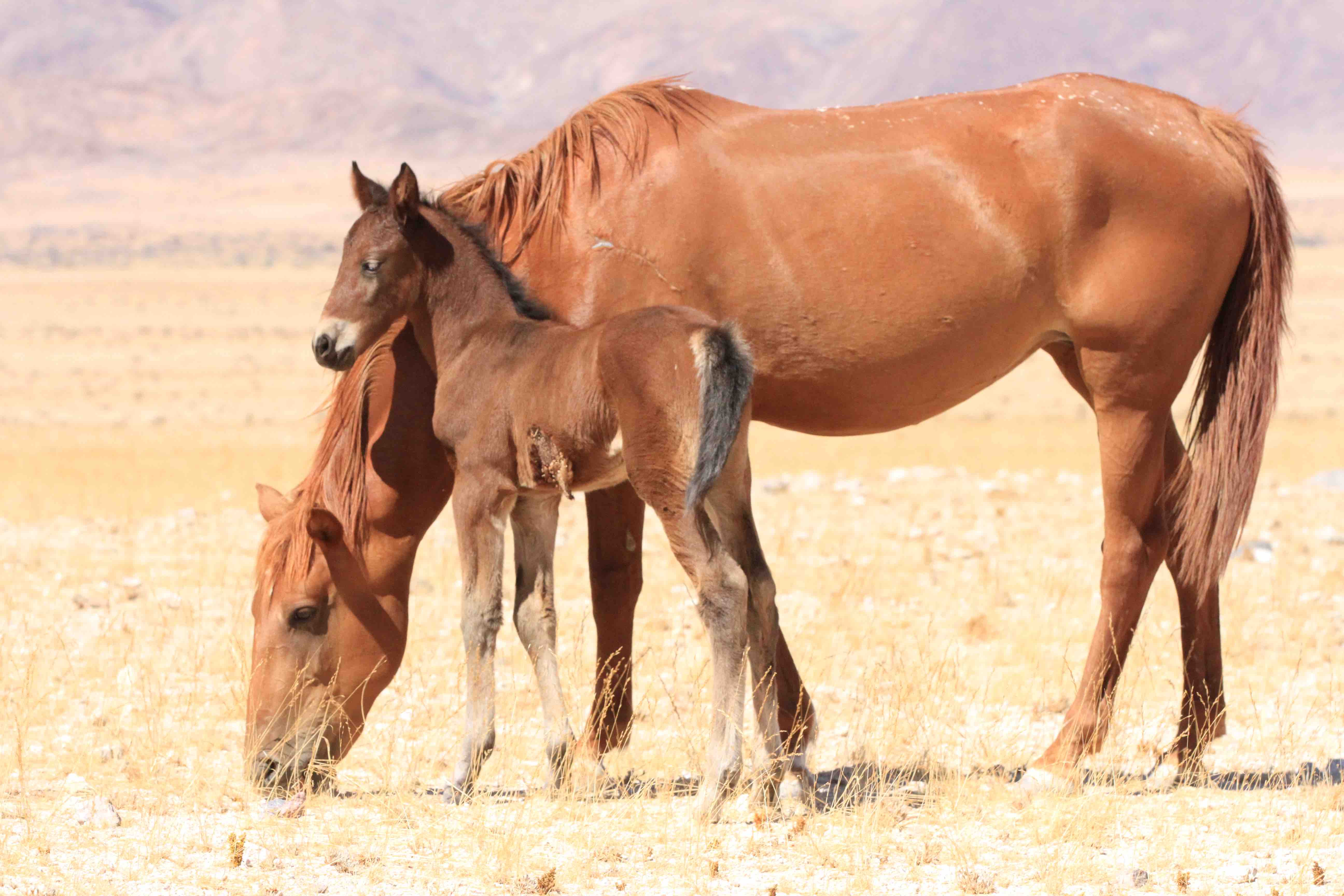 Sole survivor: Apart from this recently injured foal, no other foals have survived over the past five years and the youngest animal in the herd is now seven years old. Photo: Christine Swiegers

MET spokesperson Romeo Muyunda told Oxpeckers that three more hyenas would be captured and translocated elsewhere in the park, at a good distance away from the horses. Trap cameras showed up to 11 hyenas at diversionary feeding sites in 2017.

While horse lovers across the globe cheered, environmentalists condemned interference, stating that “MET appears to be contradicting its own tourism and wildlife policies by advocating removal of the hyenas from the national park”.

“Spotted hyenas are classified as vulnerable and are therefore a conservation priority in Namibia,” NEWS said in a statement.

“To have a natural species killed in favour of a feral species in a national park is a very, very sad day for carnivore conservation,” commented a carnivore researcher who asked not to be named.

NEWS said killing or translocating the spotted hyenas would only temporarily reduce predation of the feral horses, until new hyenas fill the gap left by the removed animals. The exact number of horses killed by hyenas is also debatable, as drought and disease also account for mortalities, the organisation said. 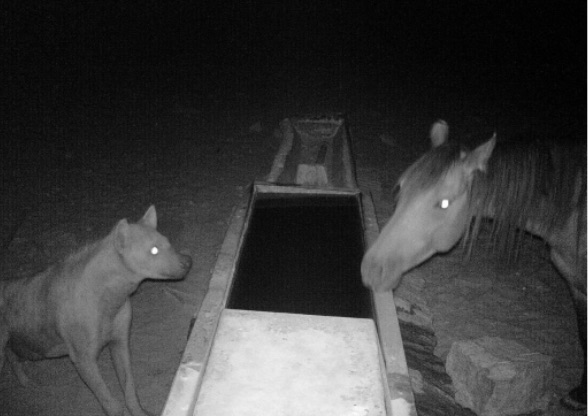 Camera trap: No one has observed hyenas killing a horse because attacks take place at night. Photo: WHF/BHP

The shooting of the hyenas has raised the question, to what extent do conservation authorities intervene in a situation between endemic wildlife and “feral” animals? The situation is unprecedented, and all parties are feeling their way around how to deal with it.

The Namibs, as the horses are known, have survived in the barren Namib Desert for more than a century. Their mysterious origins stretch back to the Great War (World War I). Images of magnificent, free horses galloping across the desert plains and stories of their adaptations, family group structures and struggle against the elements have endeared them to millions of horse lovers.

They are one of southern Namibia’s must lucrative tourist attractions, providing a vital lifeline for residents in Lüderitz and Aus. With only about 50 wild horse populations left worldwide, and a very few in deserts, their survival is viewed as imperative.

The Namibs, although feral, have defied odds of survival in the harsh desert environment, a lack of grazing, inbreeding and dependence on the Garub water point.

In contrast, the “ugly” hyenas are portrayed in literature, folklore and films as evil and linked to witchcraft. An analysis of social media posts last year showed that up to 85% voted in favour of the horses.

While some commentators are claiming the animals were “moved in” by local environmental groups, literature and sightings show that hyenas have always existed in the area, though in lower densities. 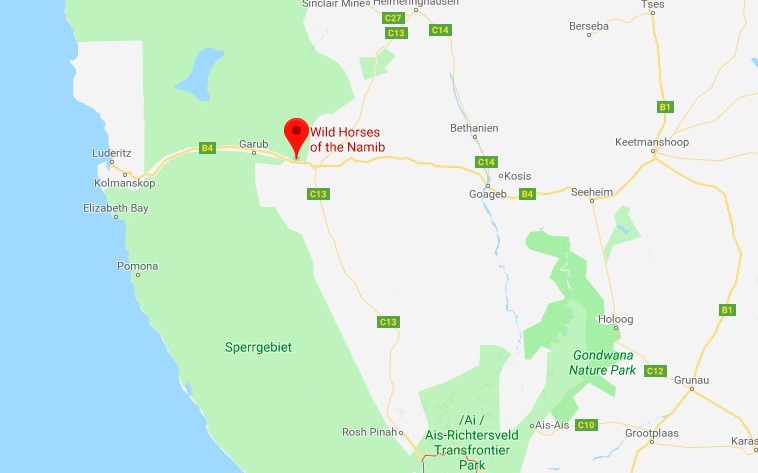 Centre of life: The wild horses and hyenas share a single water point in the arid southern Namib-Naukfluft National Park

A collared female revealed the extent of their territories and wanderings, with a home range of 4,000 square kilometres. Another collared animal was spotted 450km away. In the past four years identikits have been drawn up for some of the hyenas, but long-term behavioural data are still missing for the Garub clan.

The reasons for the escalating conflict are complex. Hyenas and other carnivores were virtually exterminated by farmers in the early 20th century. Changes in land use from livestock farming to wildlife-friendly tourism and the declaration of the Namib-Naukluft National Park made the area more carnivore-friendly.

Previously, hyenas had access to water leaking from a pipeline that stretches across the desert to Lüderitz. Better maintenance means the only available water is at Garub. The waterhole, about 20km from the small village of Aus, is also the centre of life for the horses.

Drought is a large factor in the conflict. With an annual average rainfall of 100mm, both horses and hyenas are in a continuous battle for survival, and no rain fell between 2012 and 2018. It’s going to get a lot drier, with climate change expected to cause more frequent and longer droughts.

In 1992, when a severe drought hit, the MET took drastic action and sold off 104 horses to local buyers. Since then, populations have yo-yoed, increasing to 286 animals in 2010/11 following exceptional rains.

The presence of hyenas was initially welcomed as a natural control measure, as the carrying capacity of the land was estimated to be 250 horses. But when oryx and springbok moved elsewhere in search of grazing, the hyenas stayed put. They did what hyenas do in a natural environment: seek out the sick, the old and new-born.

According to Dr Telané Greyling, considered the foremost authority on the horses, hyenas killed 100 horses – 50 of them foals – in 2013. Apart from the recently injured foal, no other foals have survived over the past five years, and the youngest animal in the herd is now seven years old.

Initially, MET kept to a policy of non-interference regarding wildlife in national parks. However, it allowed the foundation to feed both horses and hyenas. But this simply kept the hyenas in the area, and actually strengthened their numbers. They even moved their den closer to the horses. 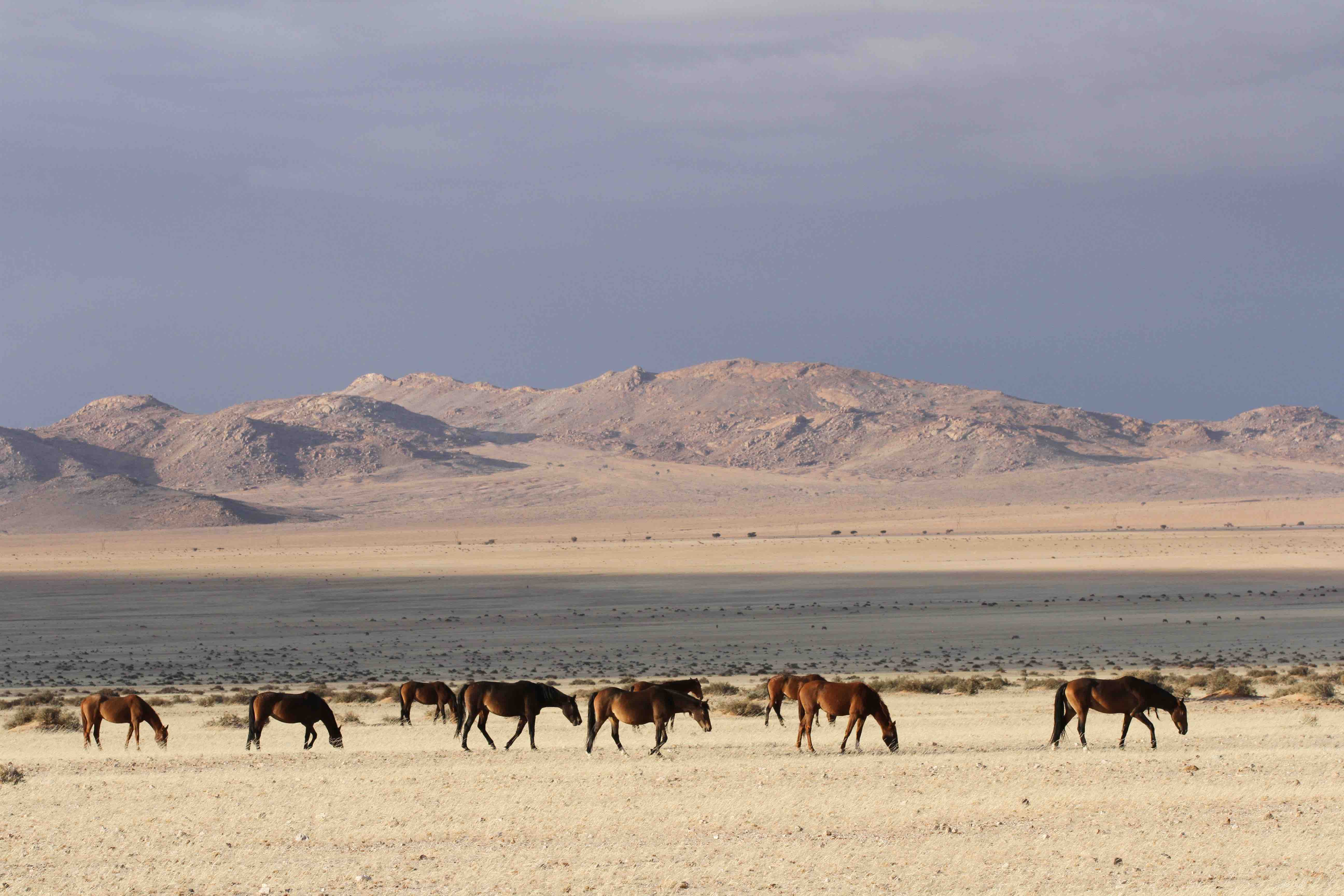 Natural heritage: The Namibs, as the wild horses are known, have survived in the barren Namib Desert for more than a century. Photo: Christine Swiegers

As horse numbers declined, the foundation appealed for custodianship over them, outlining plans to move the horses to a safer home on commercial farmland. Environmentalists and groups such as NEWS support this proposal.

But MET has refused to renounce custodianship of the horses, citing their tourism, ecological and natural heritage value.

Last week MET announced the development of a Wild Horse Action Plan, in consultation with stakeholders. It will include predator management, water provision, tourism development, feeding and a long-term horse management plan.

With few international lessons to emulate, there is no clear answer about how to manage the horses and the hyenas in harmony.

On the ground there is good cooperation between horse and hyena researchers, who share trap cameras and data. Both groups stressed to Oxpeckers the need for further research to understand the behaviour and movements of both the horses and the hyenas.

For instance, no one has observed hyenas killing a horse because attacks take place at night. It is unknown how many hyenas work to kill an animal, and if and how the horses defend themselves, said Dr Ingrid Wiesel of the Brown Hyena Research Project, which has collared some spotted hyenas at Garub.

Herding horses into bomas at night could prove disastrous, due to their family dynamics and infighting. Fencing them into a smaller area would curtail their freedom, while having human “chaperones” for foals would prove costly.

Thursday’s debate will pitch horses against hyenas. The fate of the horses and hyenas rests in the MET’s Wild Horse Action Plan, which is still in the process of development.

Linda Baker is a freelance writer who worked in Namibia for 25 years – first as a game ranger and then as an environmental publicist. She currently lives in Cape Town