What is free, prior & informed consent for mining? 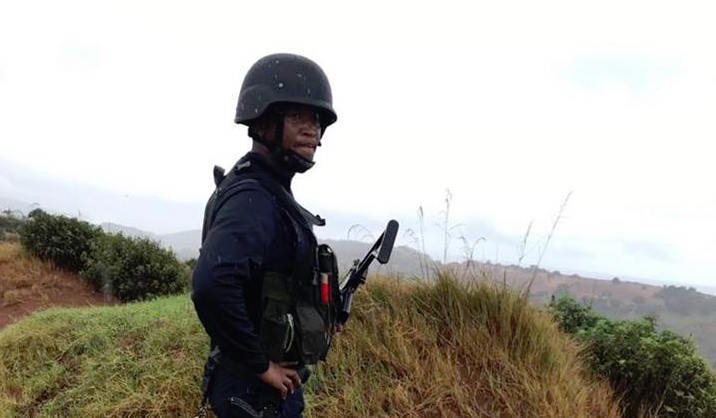 24 Jan What is free, prior & informed consent for mining?

The Western majoritarian view does not work when consulting mining-affected communities such as Xolobeni, reports Andiswa Matikinca

Heavy hand: A soldier guards the dunes during the ministerial meeting at Xolobeni. Photos courtesy Sustaining the Wild Coast/Facebook

What was termed “the third coming of Mantashe” by the community of Xolobeni ended in chaos on January 16 when police started firing stun grenades to disperse community members after the meeting had been called to an abrupt end by Mining Minister Gwede Mantashe.

A bigger shock to the community was the immediate release of a media statement from the Department of Mineral Resources (DMR) announcing the imminent commencement of an “independent survey” to determine whether mining should go ahead in Xolobeni.

This survey, according to the DMR, was “in line with one of the outcomes of the court judgment of the High Court in North Gauteng last year, which called for thorough consultation of the Xolobeni community prior to any granting of a mining right”.

The #Right2SayNo judgment handed down on November 22 2018 stated that the DMR lacked “any lawful authority to grant a mining right” to Australian-owned Transworld Energy and Mineral Resources unless they had complied with the provisions of the Interim Protection of Informal Land Rights Act (IPILRA). The DMR has since launched an appeal against the judgment.

In terms of the Act, the DMR is obliged to obtain full and informed consent from the applicants and the Umgungundlovu community in Xolobeni, the court ruled.

Richard Spoor, of Richard Spoor Inc who are the legal representatives of the applicants opposing mining in Xolobeni, said the Constitution “requires the state to give people secure tenure and secure rights over their land” in terms of the provisions of the IPILRA.

“Essentially the court said that the process of obtaining consent needs to be done according to IPILRA, which includes considering customary laws,” he said.

The laws and customs of communities outline that decisions are based on consensus. Provisions for the Western majoritarian view do not work in communities such as Xolobeni, Spoor said.

“Consensus of course does not mean that everyone will agree, but it is important to note the degree of consensus taking into consideration the rights of those who will be mostly impacted,” he said. 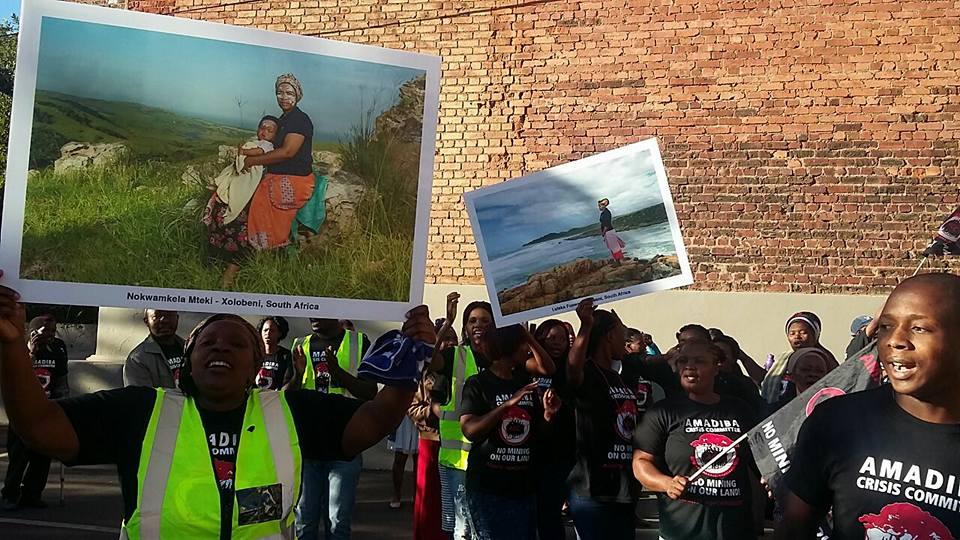 Say no: Members of the Amadiba Crisis Committee hold up posters of Xolobeni outside a court hearing

According to the United Nations Food and Agriculture Organisation, “Free, prior and informed consent (FPIC) is a specific right that pertains to indigenous peoples and is recognised in the UN Declaration on the Rights of Indigenous Peoples, which allows them to give or withhold consent to a project that may affect them or their territories.”

Once they have given their consent to a project, FPIC allows communities to withdraw it at any stage. FPIC also enables them to negotiate the conditions under which the project will be designed, implemented, monitored and evaluated.

The Xolobeni community has condemned the survey to be conducted by the DMR, stating that it is not compliant with the court order.

Amadiba Crisis Committee (ACC) spokesperson Nonhle Mbuthuma said the survey will not be welcomed by the community as it is being imposed on them. The ACC represents the Xolobeni community members who are against the mining of titanium in the area.

Mbuthuma reiterated Spoor’s comments on the issue of consent being communal under customary law: “When there are agreements, they must be done properly, but the government doesn’t believe in that because they know that it’s a long process,” she said.

She believes DMR is trying to trump those processes “because they believe that if you push for or do a ‘yes/no’ survey it will be easy”.

Mbuthuma said a previous survey had been conducted by the Bench Marks Foundation in order to supplement their High Court application for their right to FPIC before mining takes place.

The survey “found that from the 72 Xolobeni households they managed to go around, 68 had signed an affidavit that they don’t want mining”, she said.

According to Mbuthuma, this survey was regarded as free and fair by the community because the traditional courts were approached prior to the survey being undertaken. The survey included all the households in the community, whether they were pro-mining or anti-mining, and the community had urged that those who were pro-mining and had no desire to participate be respected as they were within their rights to refuse.

David van Wyk, lead researcher at the Bench Marks Foundation, said the previous survey was conducted among community members living on the land who would be directly affected by the mining activities. The survey that Mantashe is proposing would “widen that survey by a 100km to 200km radius where a lot of people in that radius are unemployed”.

“He is going to sell them the idea that they are going to get jobs which they are not going to get and in the process destroy the control of the small community directly affected over their own land, not because he cares for the unemployed and their development but simply because he can,” Van Wyk said.

In response to questions from Oxpeckers, DMR’s head of communications Ayanda Shezi said its survey and verification process will be conducted by an independent institution, which she did not name.

“The survey is in line with one of the outcomes of the court judgment, which calls for thorough consultation of the Xolobeni community prior to any granting of the mining right,” she said.

The survey “will assist in giving a clear and decisive way forward on the potential of mining development in Xolobeni. The DMR will accept the outcome of the survey and will act in a manner consistent with the Mineral and Petroleum Resources Development Act and the Constitution,” she said.

Find the Xolobeni case documents and other resources on #MineAlert here.