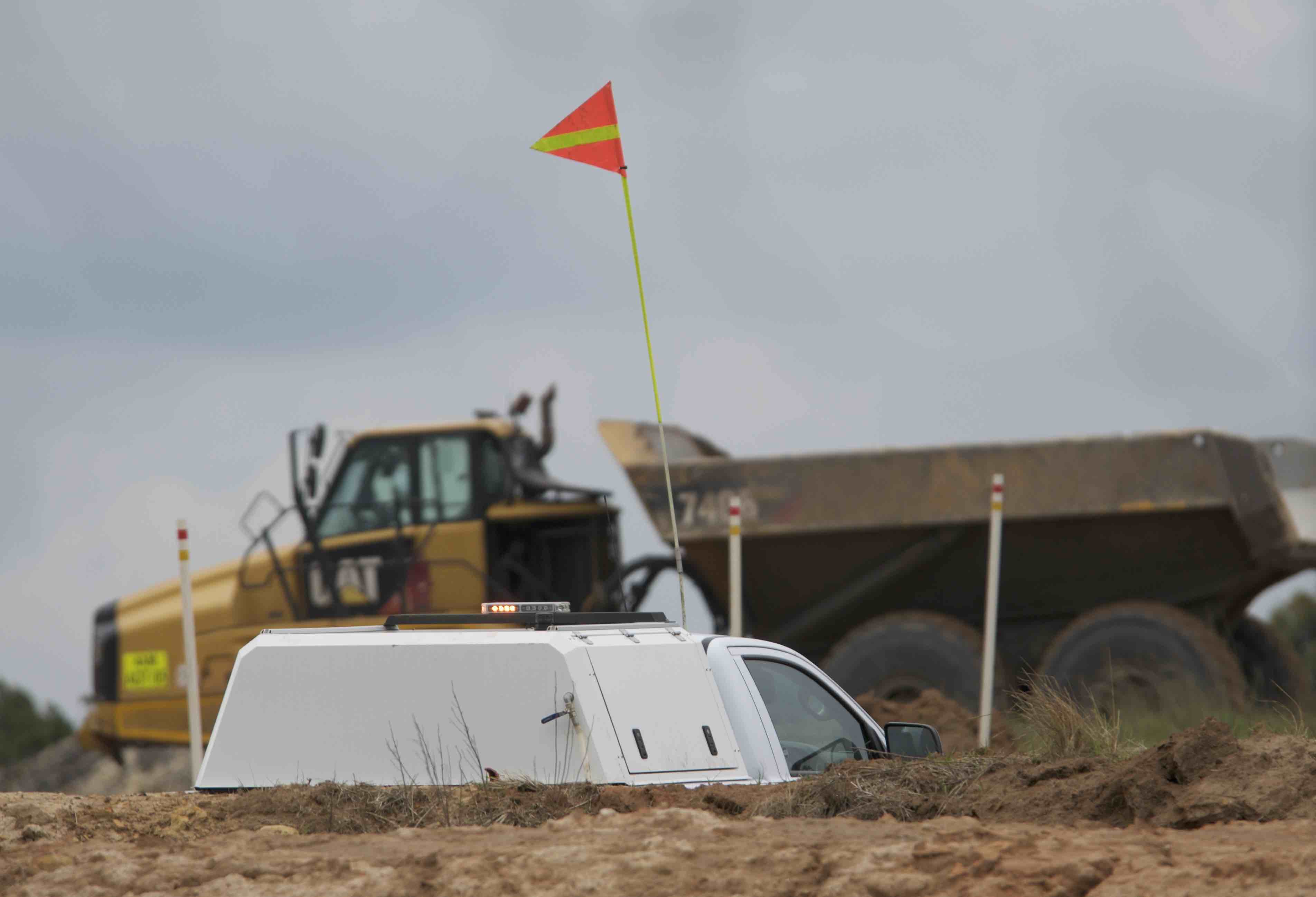 Local residents reported blasting and the removal of coal close to the wetlands of the Greater Lakenvlei Protected Environment. Andiswa Matikinca investigates

The Greater Lakenvlei Protected Environment between Belfast and Dullstroom is a water source of two of the most important river systems in Mpumalanga.

Comprising about 14,300ha of mostly grasslands and wetlands, it was declared a protected area in April 2017 by the provincial government and is classified in the Mpumalanga Biodiversity Plan as “irreplaceable”. It is a water catchment that feeds the Elands river, which flows into the Crocodile river, and the Olifants river – both major water sources that eventually flow into Mozambique.

This protected area is now under threat amid allegations of illegal mining made by local residents, who report that blasting and the removal of coal recently started close to the wetlands.

Werner Krynauw, a local farmer, said Lakenvlei was zoned for agricultural land use and would need to be rezoned for mining to take place within the law.

The Department of Mineral Resources granted a mining licence to William Patrick Bower (WPB) Colliery in 2012 for portions 6 and 23 of Groenvlei 353 JT and portion 12 of Lakenvlei 355 JT.

The properties are surrounded by the Greater Lakenvlei Protected Environment but have not been included in the protected area after the mining licence was granted.

The mining licence became the subject of internal appeals by the Escarpment Environment Protection Group and Birdlife South Africa. Both groups were set on preventing mining activities pending the change of land use, a re-zoning certificate and environmental authorisation. The matter was in court until April 2017, when former mining minister Mosebenzi Zwane was given 30 days to consider the appeals.

No further communication was received from the minister or department by July 2017, when WPB started with the construction of roads and the clearing of vegetation on the properties. Now, say local concern groups, WPB appears to have started full-blown mining activities “illegally”.

Unbranded trucks were seen to be delivering equipment to the site in the middle of the night prior to blasting by a company called Kukhula Mining. 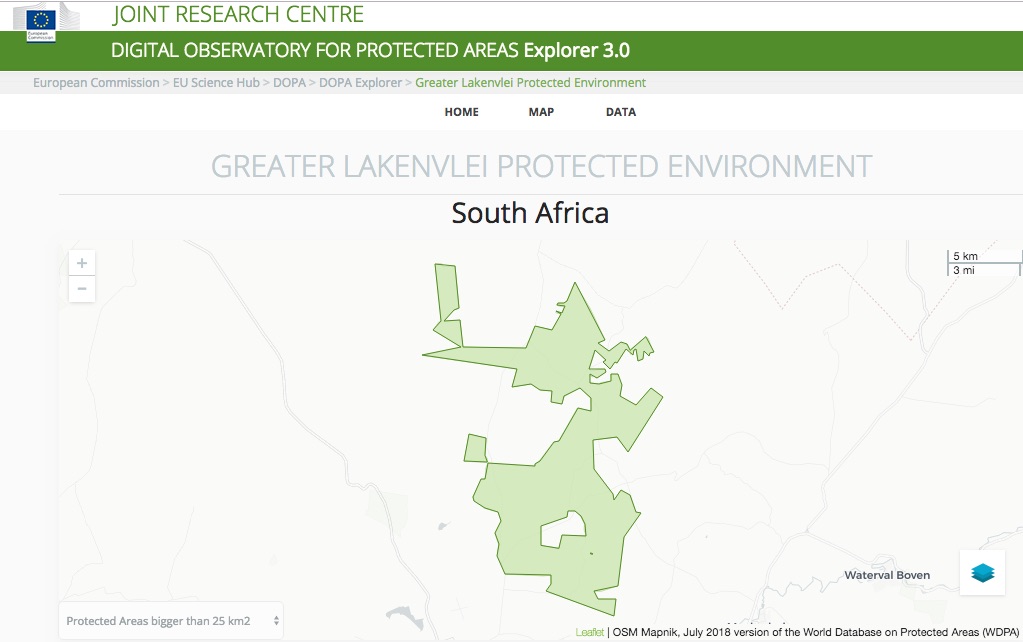 Hole in the middle: The Greater Lakenvlei Protected Environment mapped on the World Database on Protected Areas. The mining properties, in white near the bottom of the map, were not included in the protected area after the WPB mining licences were granted

Peter Arden, secretary of the Greater Lakenvlei Protected Environment Landowners Association’s Committee, laid charges at the Belfast police station against WPB Colliery in April 2018, with the help of the Mpumalanga Tourism and Parks Agency, which opposes mining in the protected area.

“The charges [we laid] were mining without a water use licence, without rezoning or environmental authorisation, and damage to a wetland. Needless to say, the charges went nowhere and the matter has been handed over to the National Prosecuting Authority,” said Arden. He has not received a response from the NPA.

According to Arden, “an inspection was carried out by the Nkangala municipality at the site prior to July 2018 with regard to zoning. Apparently, no rezoning has taken place for the Groenvlei portions and this has been verbally acknowledged by Nkangala municipality, but they steadfastly refuse to give us a copy of the report, to which we are legally entitled.”

Krynauw said he is aware that other prospecting applications have been received by the DMR for the mining of coal and other minerals found in the Greater Lakenvlei Protected Environment and he fears that if WPB is allowed to continue with its activities, it will set a precedent that will result in harmful environmental impacts that can never be remedied.

“Mining isn’t bad, we need it, but then leave the ecological areas out. That’s what we’re fighting for,” Krynauw said. 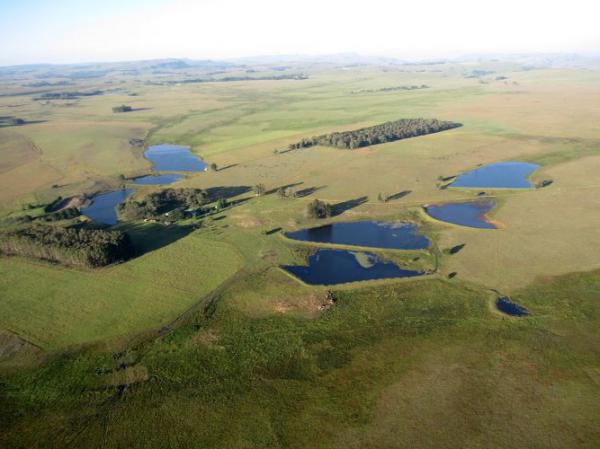 The national DMR office said in a statement that, according to the information at its disposal, a site inspection was conducted on September 12 and “the rightsholder had furnished the environmental inspectors with proof that they are in possession of a valid mining right and an environmental authorisation.

“The lodging of an appeal in terms of the Mineral and Petroleum Resources Development Act (MPRDA) does not automatically render the mining operation illegal, until and unless the appeal decision is made and provides otherwise.

“If there was an appeal lodged in terms of the National Environmental Management Act (NEMA), only then would an environmental authorisation be suspended. It was on this basis that it was deduced that the information submitted with the initial complaint was based on limited information. On this basis the matter was duly closed.”

The land zoning issue would not in way render the mining operation illegal, the DMR statement said. “The zoning can only have a bearing on the validity of the mining right in question once a negative ruling or decision is made by the relevant municipality or a competent court as the relevant authorities. The operation as it stands cannot be deemed to be illegal.” 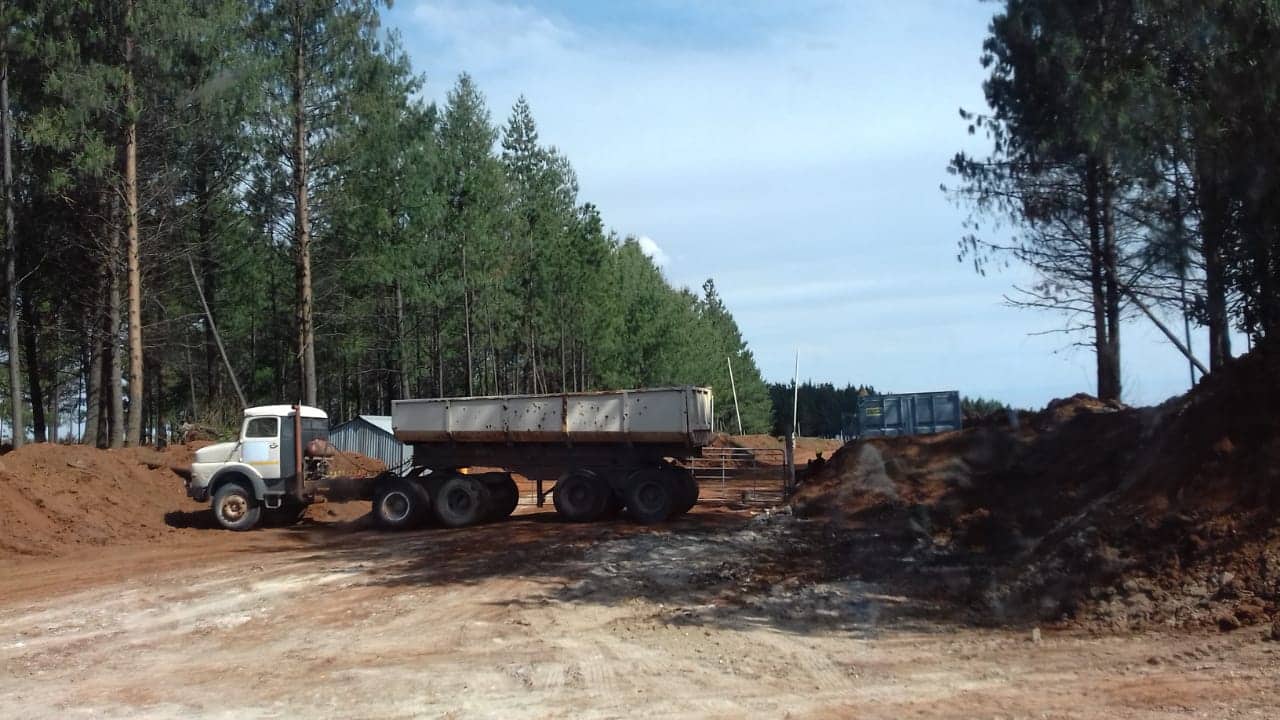 Unbranded trucks were seen to be delivering equipment to the site in the middle of the night prior to blasting by a company called Kukhula Mining. Photo supplied

Thobeka Gumede, an attorney at the Centre for Environmental Rights, said the centre represents Birdlife and the Escarpment Environmental Protection Group in an application for the judicial review of the mining right awarded to WPB.

The clients had supplemented their review papers in August 2018 upon receipt of the record of decision from the DMR and were awaiting an answering affidavit from WPB. “The DMR has not opposed the review application,” Gumede said.

“As far as we are aware, WPB has not applied for a land-use change at the municipal level to change the zoning of the properties on which the mine is planned from agriculture to mining. This means that they are not permitted to commence with mining activities. It would seem, however, that if mining has started, the municipality is not enforcing the law,” she said.

A water use licence granted to WBP in 2015 was suspended pending the outcome of an appeal to the Water Tribunal, but the suspension was later lifted in May 2017 by former minister of water and sanitation Nomvula Mokonyane. The reasons given for uplifting the suspension included that it was “highly prejudicial and detrimental to WPB Colliery’s lawfully obtained authorisations” and would derail the project’s timelines, put investments at risk and prejudice much-need jobs and community projects in the area.

Attempts by Oxpeckers to contact WPB, Kukhula Mining and the site manager were unsuccessful. Calls went unanswered, and Internet searches threw up little more than the company name and registration number.

Krynauw said this week mining activities on the site appeared to have halted, but he could not say why.

Find information and documents relating to Lakenvlei on #MineAlert here and here. Create an alert to keep up to date with further developments