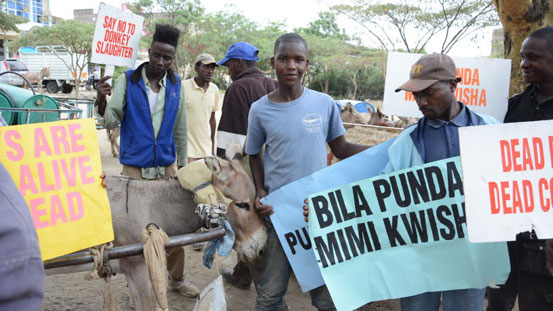 No-go: Kenyans protest the re-opening of the Star Trading donkey slaughterhouse in Naivasha in May 2017. Photo courtesy KSPCA

One morning in July, Cecil Mwakiposa and his neighbours in the Maasai village of Onyoldolsanya in northern Tanzania woke up to find their livestock pens emptied of all their donkeys.

Considering the working value of the beast of burden, it was a huge tragedy that brought sorrow to this community that herds its cattle and goats on a stretch of near-barren grasslands on either side of the road linking Arusha to Namanga, the gateway from Tanzania to Kenya.

Although they rely heavily on their donkeys for farm labour and as a means of transport and haulage of goods and supplies for livestock herders, the Maasai of Onyoldosanya and Langwido are by no means donkey farmers, and they believe the loss of one is far too many.

“We know they [the thieves] had at least two trucks, and that after moving from kraal to kraal untying and loading up our donkeys, the vehicles took the road straight to Namanga border post. They are stealing our donkeys to supply the slaughterhouses in Kenya,” Mwakiposa said.

He paused, as if to seek authority to proceed from a police-officer tribesman who guided Oxpeckers around Onyoldolsanya.

“The loss of a donkey has the effect of immediately reducing me to a donkey,” Mwakiposa continued. “I will have to take its place do all the daily tasks it used to do.

“Donkeys are hard to breed because they multiply very slowly. With the Kenyans coming across the border to steal them and supply the Chinese abattoirs in Nairobi, these grasslands will soon be emptied of donkeys.”

In Langwido, about 100km from the border post at Namanga, the herders are being targeted by cross-border donkey-theft syndicates that truck the animals through the numerous Tanzanian police roadblocks to the Kenyan border.

Langwido community court leader Kalinda Moze said it is easy to steal livestock from the Maasai because they do not build secure pens. Overnight the animals are tethered by rope to stakes or trees, which make them sitting targets for organised stock thieves.

“Friends in the police believe the donkeys are trucked through the [Namanga] border into Kenya. Because of the low status of the donkey, many victims do not follow up. Many others don’t report donkey thefts at all. The police share the same attitude: they don’t act on donkey-theft cases,” Moze said.

With no police help in stemming the stock theft, the Maasai of Langwido have tried to adapt by tethering their animals closer to their living quarters, sleeping in the kraals with the donkeys and introducing guard dogs to protect them. 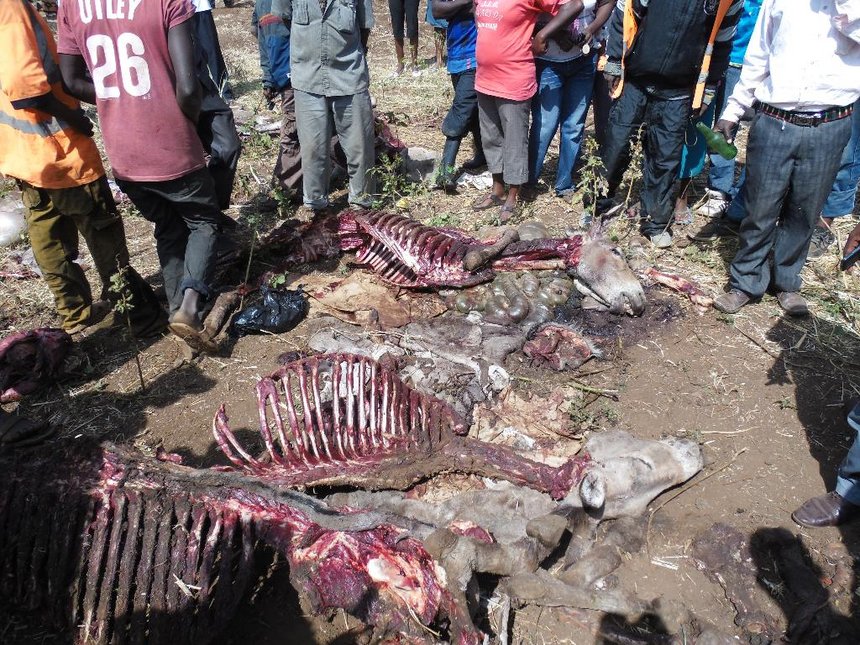 Bush slaughter: Villagers examine the carcasses of stolen donkeys that were slaughtered in Naivasha County for their skins in June 2018. Photo courtesy The Star

In Kenya, the slaughter of donkeys for food was a common occurrence long before the advent of the first Chinese abattoir in 2016.

That explains why the city of Naivasha – surrounded by a large rural county where donkey meat is a historical delicacy – has two abattoirs with a joint slaughter capacity of 400 donkeys a day.

The two abattoirs are a joint venture of Kenyan and Chinese businesspeople. Since opening in 2016, Star Trading has been closed twice – once for animal cruelty following the discovery of dead donkeys in its holding pens. In April 2017, it was briefly closed after public protests against allegations that it was buying stolen donkeys.

Raphael Ngome, respresentative of the Naivasha County branch of Kenya Society for the Prevention of Cruelty to Animals, has been monitoring the slaughterhouses since local businessman John Kariuki and a Chinese partner opened the first in the Maraigishu industrial area of Naivasha in 2014. He said the donkey-hide trade is impacting on the donkey population, animal welfare and way of life in the communities.

“In Naivasha donkeys play an important part in the daily lives of our people. We have a serious water problem, so we depend on donkeys to pull the carts to stricken areas. Among other jobs, donkeys transport goods to markets, sick people to the clinics and herd-boys through the forests,” he said.

“With two slaughterhouses in the city, the number of donkeys across the county is fast going down. Some sell willingly, and thieves steal from the rest to supply the abattoirs. The few donkeys left are no longer enough to meet daily labour demands.

“The donkey-hide trade will lead to an extinction of the species. Kenya faces a future without donkeys,” Ngome said.

Chinese demand for ejiao, or donkey-hide glue, a Chinese medicine used to treat various old-age ailments, has turned the trade in donkey hides into a multibillion-rand business across the globe. Recent reports by animal welfare organisations estimate that the demand for hides coming from China could reach up to 10-million donkeys a year, representing almost a quarter of the entire global donkey population.

All the donkey hides produced in the Kenyan abattoirs are exported to China and most of the meat is sold locally at cheap prices.

The trade has contributed to community tensions, with some members resorting to mob justice against those suspected of stealing donkeys. Organised stock-theft gangs have taken advantage of the community tensions, corruption in law enforcement and lack of accountability at the abattoirs to smuggle donkey products from bush slaughterhouses into the legal trade.

In Naivasha, Oxpeckers met taxi driver Lawrence Kamau, who said he had made “lots of good money” from the Star Brilliant abattoir since it opened in 2012.

“When the abattoirs started, people willingly sold their old, injured and excess donkeys. With the excess donkeys gone, the demand is up by thousands and yet the people don’t want to sell anymore,” he said.

“I have been hired countless times by donkey-theft gangs to deliver hides to the Star Brilliant abattoir. I have also ferried loads of donkey meat to the informal markets, especially in the old suburbs and shantytowns.”

The spate of donkey thefts around Naivasha has hardened community attitudes to the trade, resulting in fewer people being willing to sell their donkeys. But with the abattoirs in Naivasha and Baringo paying up to U$100 (KSh10,000) per hide without asking questions, Kamau fears the change in community attitudes may mean nothing.

“People are no longer willing to sell because the poverty that comes with it is now evident among those who have sold. But the scarcity has bred demand, and demand has bred incentives. The Chinese now pay more, and ask no questions to keep donkeys reaching the abattoirs,” he said. 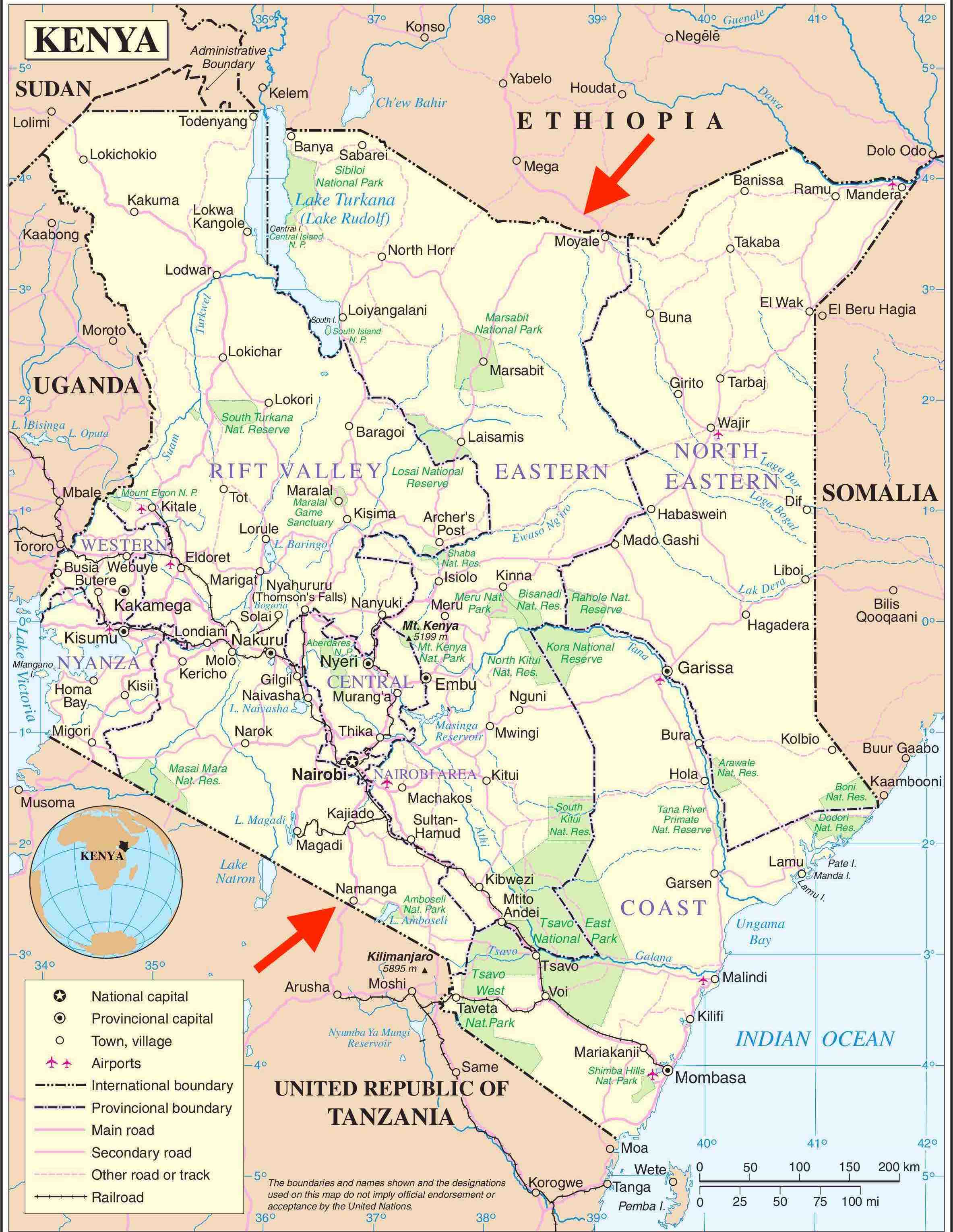 Cross-border trade: Donkeys are smuggled into Kenya from Tanzania via Namanga, and from Ethipio via Moyale

Kamau said most of the donkeys slaughtered in Kenya are now stolen or bought legally in Ethiopia before being smuggled into Kenya. There are reports that some are being brought in from Somalia too.

“There is a higher demand for hides now, which coincided with the increased unwillingness to sell among Kenyan donkey owners. That has forced the Star Brilliant managers in Naivasha and Baringo to buy donkeys from Kenyan and Ethiopian cross-border traders.

“Every day trucks arrive from the Moyale border with donkeys from Ethiopia going to Naivasha. Nowadays there are more Ethiopian than Kenyan donkeys being slaughtered here,” he said.

In a recent analysis of the Ethiopia-Kenya cross-border donkey trade, Ethiopian equine specialist researcher Dr Fitsum found that most donkeys slaughtered at the abattoirs in Baringo and Naivasha were sourced legally or stolen from various locations in Ethiopia.

According to Fitsum and a local researcher, Abdi Ali, the Ethiopian donkeys that reach Kenyan abattoirs are bought at livestock markets. Deals are cut between donkey collectors from the local Ethiopian Guji clan and the Kenyan Burji clans, who are the buyers. The two clans occupy large swathes of territory on either side of the Moyale border area.

Up to 3,000 donkeys of mixed sex and age are sold on the open livestock markets of Ethiopia a month, although the middlemen pay better for large and healthy males. The prices range from between 1,600 Birr ($57) and 3000 Birr ($106) per beast.

From the livestock markets, the animals are trekked and driven in cattle trucks for distances ranging between 250km and 1,100km to reach the border post.

“All the animals purchased will face a distance of more than 250km in an arid environment, through difficult terrain with no water and scarce feeding, to the Moyale cross-border cities. They are then reportedly trucked to the slaughterhouses in Naivasha and Baringo.

“Because of the double taxation of 60 Birr [about US$ 2.14] per donkey, some cross-border traders have shifted to Miyo Wereda in Borana to reach the city of Sololo in Kenya,” Fitsum said.

The research also found that Gabra clans who live in the Golobo rangeland near Moyale City in Kenya were buying stolen Ethiopian donkeys and slaughtering them in the bush to sell the meat. The government has repeatedly engaged the clan, but failed to stop the practice. 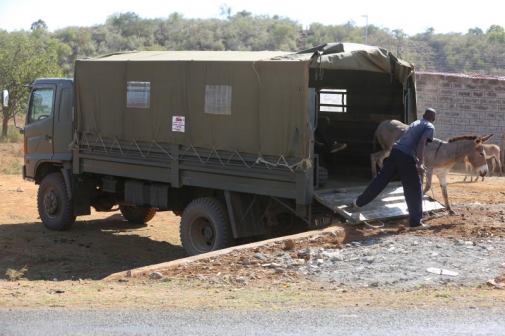 According to The Donkey Sanctuary Kenya, the Kenyan Department of Veterinary Services has licensed the opening of a third donkey abattoir in Kithyoko town. Florence Magau, the charity’s manager, said it is worried about reports it has received that the new facility is being supplied with donkeys smuggled from Somalia.

A recent report from Nairobi-based donkey welfare campaign organisation Brooke East Africa said more than 1,000 donkeys were stolen and illegally slaughtered to supply the donkey-hide trade in Kenya between December 2016 and April 2017.

High demand has increased the price of a donkey from around KSh7,000 ($68) in 2014 to nearly KSh15,000 ($146) today. Peta Ingram, chief executive officer of Brooke (Global), said the effects of the donkey-hide trade are proving to be greater than originally feared.

“Alarming reports have been coming in from Kenya, Ethiopia and South Africa, and it is clear that the donkey trade is affecting people who rely on donkeys to support their livelihoods. The suffering taking place is stark and unacceptable. We are against these illegal activities and are taking steps to do everything in our power to prevent it,” Ingram said.