What to do as the Mother City runs dry

07 Mar What to do as the Mother City runs dry

Posted on 7 Mar, 2017 by Oxpeckers Reporters

There has never been a more urgent time for Cape Town to adapt or die. Yolandi Groenewald investigates the measures city authorities are taking to survive the water woes

The signs on the freeway into Cape Town city centre are alarming to visitors: “Save water now. Only 112 days of water left”, said one; “Dam levels 25%. Reduce your consumption now”, declared another.

Are Capetonians taking any notice? The Western Cape region is likely to get drier and drier, and extreme vulnerability to water scarcity is now a reality.

This would entitle the city to receive help from national resources, such as funding and emergency water supplies from up north, where good rains had fallen. The national funds would also help finance the emergency and long-term adaptation measures the city is exploring.

Water restrictions have been in place in Cape Town since last year and the city recently started naming and shaming its biggest water users.

The city launched a social media campaign, under the hashtag #H2OHero, which encourages the public to submit photographs of their water-saving efforts.

Cape Town’s main water source is the Theewaterskloof dam, where each day the water level creeps lower and lower. In February the dam was only a third full, and experts warned it could dry up before the winter’s usual rain season starts in June.

The drying up of the Mother City was not unexpected. The City of Cape Town’s environmental resource division commissioned a report in 2006 that showed the Northern and Western Cape provinces were the two provinces most at risk of climate-induced warming and rainfall change.

“This makes the City of Cape Town’s resource management more challenging,” the division said at the time. Ten years later, the scientific modelling has proved true.

In response to the 2006 report, city authorities proposed adaptation solutions such as desalination, water harvesting, using the Table Mountain aquifer, as well as water restrictions and higher water tariffs to reduce demand.

Disaster zone: Johnny Miller from Code for Africa released video footage comparing the levels of water in Theewaterskloof dam from January 17 to March 25 2017. Cape Town’s largest dam for drinking water stood at at 21.1% in early April. Authorities said on April 3 the city’s water supply was down to its last 100 days, and emergency supply schemes were being implemented

Although the city is encouraging rainwater harvesting in tanks installed in homes and commercial buildings, the uptake has been less than hoped for, and much more needs to be done to encourage the public to use rainwater wisely. 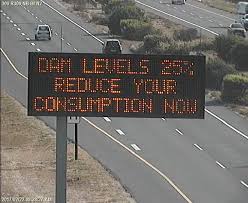 Water woes: signs on the freeway are alarming

Infrastructure plans to adapt to increasing water scarcity include new supply system augmentation schemes and a water reuse project. However, the first additional scheme planned – the Voelvlei Augmentation Scheme, which would involve the pumped abstraction of winter water from the Berg River – is only scheduled to come online in 2021.

The establishment of a multibillion-rand desalination plant on the northwestern coast is a proposed solution. But this will come at a steep price, and the provincial environment department told the Western Cape legislature that the costs would have to be recovered through increased water tariffs.

A feasibility study indicated that the proposed 450-megalitre-a-day desalination plant would cost around R16.5-billion and would have an operational cost of R1.2-billion a year, with electricity usage making up a large part of the bill. Peter Flower‚ the city’s water and sanitation director‚ said the plant could mean a 50% price hike in water tariffs for consumers.

Limberg said the city was also exploring whether water reclamation and using the Table Mountain aquifer would be cheaper, more viable options.

Tapping the aquifer under the Table Mountain group would be relatively inexpensive because no new infrastructure would be needed. However, city authorities indicated it could only be ready by 2024 and scientists have warned it has to be carefully managed so as not to deplete the water resource.

The city’s water reuse project, which would see up to 100 megalitres of waste water recycled into drinking quality, is only planned to be ready by 2023. 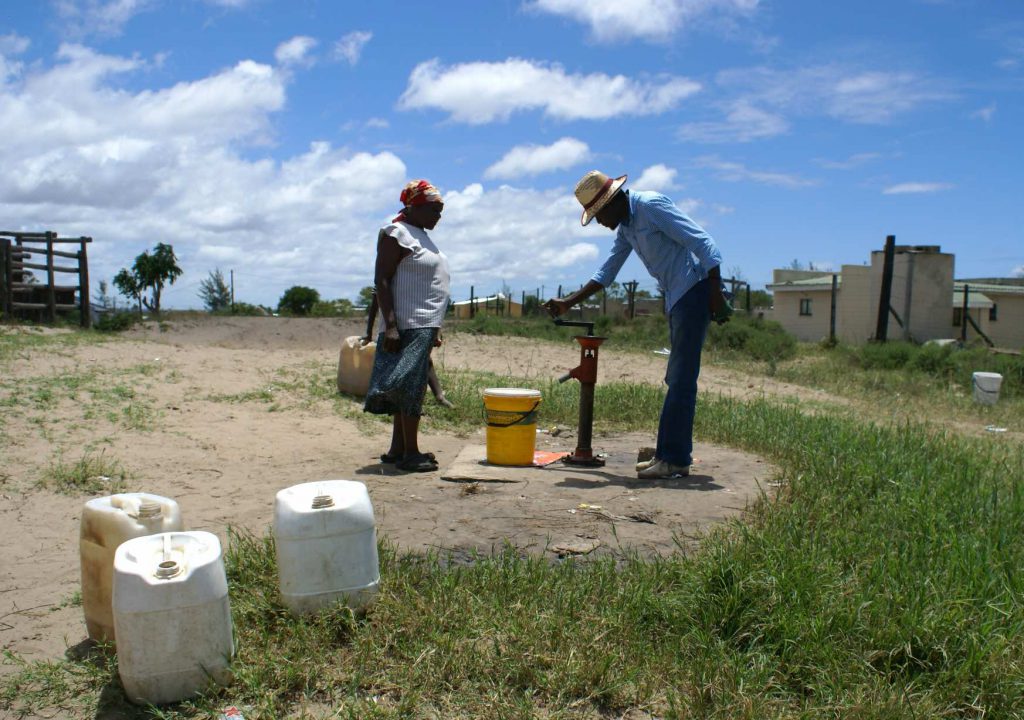 Water pump: ‘The best thing is to think long-term, and not to let this crisis go to waste’

Teaming up with WWF South Africa, the Boston Consulting Group’s Alan Iny – an expert in scenario planning based in New York – said it was critical to take this year’s crisis as the base for how to adapt to the threats of the future.

“Given the relatively low rainfall in South Africa, it is important to pursue all possible ways to increase supply. This includes innovative desalinisation solutions, reuse and recycling ‘fit for purpose’ water,” he said. “But frankly the best thing is to think long-term, and not to let this crisis go to waste.

“Can we gradually get children to see every drop of water as a precious commodity, even after this particular drought is over?”

Iny said it was imperative to re-think water demand, including implementing more efficient agriculture, which consumes more than 60% of clean water.

Christine Colvin, senior manager at WWF-SA’s freshwater programmes, said it was critical to probe hard infrastructure such as pipes, taps, reservoirs and dams. “The drought has been a pressure test for our water economy and we need to respond promptly to this test,” she said.

It was critical to move away from a linear water economy to a circular water economy where the most benefits are derived from water at every step, Colvin said. This circular model is based on reusing water time and again, retaining its full value.

A major obstacle to water management is that many South Africans consume water as if they were living in a water-rich country, said Portia Bangerezako, head of sustainability at one of South Africa’s biggest insurers.

“As insurers we know that the drought is a huge risk and we are worried about the future,” she said. “South Africans, especially businesses, should become aware of their water footprint. We are an extremely dry country. People must realise that.”

To see how much climate change is costing you, try the ClimaTracker Food Basket Calculator

How to make wine without water: the delicate tightrope Western Cape wine farmers have to negotiate in adapting to a drier environment caused by climate change

Yolandi Groenewald is an Oxpeckers Associate based in Johannesburg. This feature was funded by an adaptation grant provided by the Earth Journalism Network. An edited version first appeared in City Press newspaper