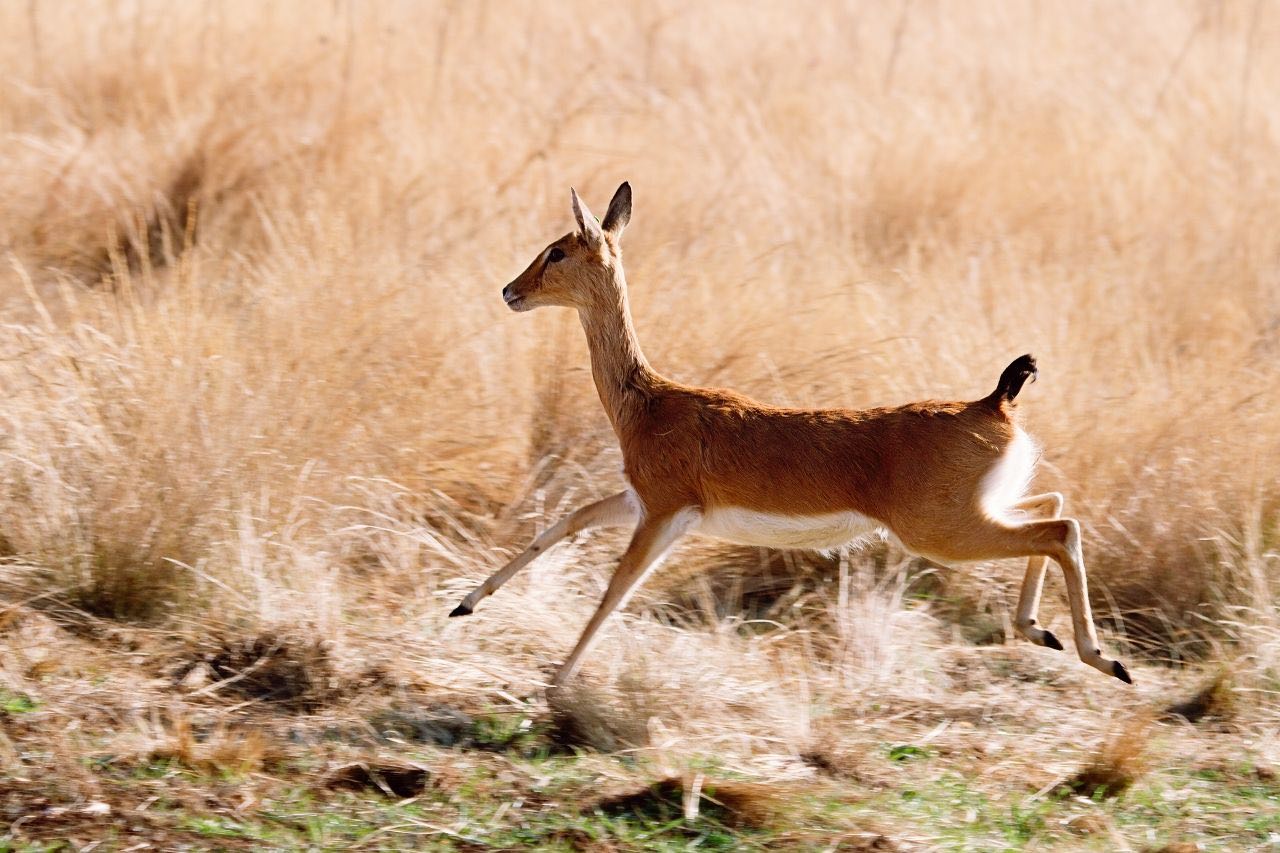 Posted on 7 Sep, 2016 by Oxpeckers Reporters

Game breeders cashing in on sales of endangered oribis are adding to the threats pushing the species towards extinction. Dale Hes investigates 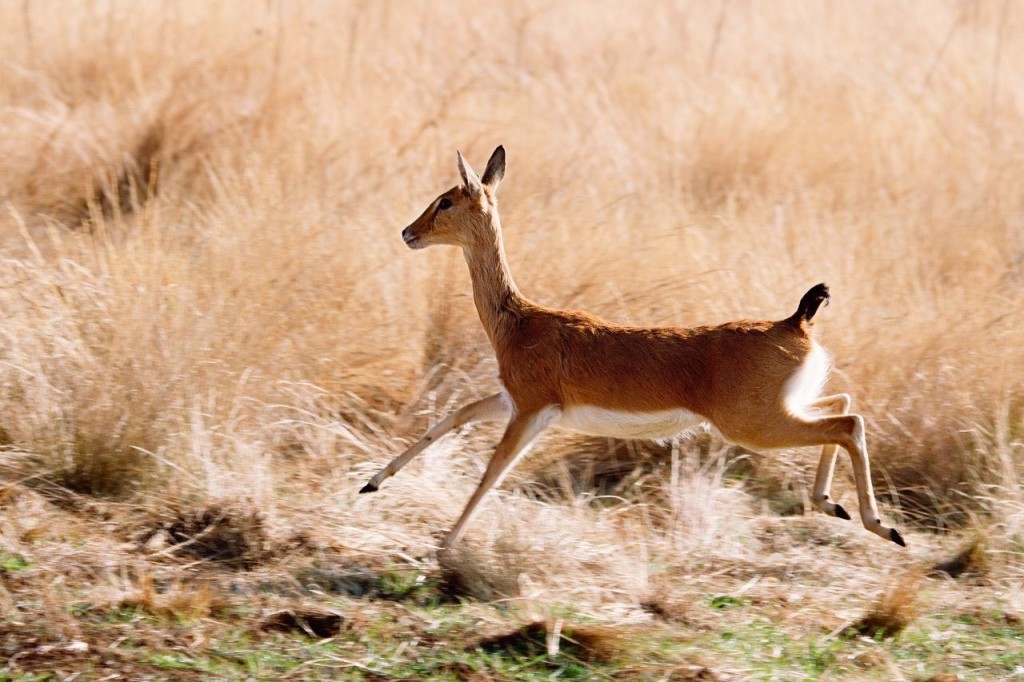 New legislation adds oribis to a list of ‘tame and domesticated animals’ under the Animal Improvement Act, meaning game ranchers can breed and manage them like domestic livestock. Photo © Midlands Conservancy Forum

Oribis are smallish buck that occupy the same endangered status as wild dogs and black rhinos on South Africa’s list of threatened or protected species.

For years they have been under intense pressure from habitat destruction, snares and illegal hunting with dogs. Now conservationists and landowners in Mpumalanga say they face a new, far more daunting threat at the hands of farmers and game breeders creating an oribi “pyramid scheme”.

Oribis are to be found in only a handful of formally protected areas, with the majority occurring on privately owned land. Landowners therefore shoulder the bulk of the responsibility in protecting wild oribis.

Characterised by large, open grasslands, the farms around Ermelo in southern Mpumalanga offer the perfect habitat for the territorial antelope. As the countrywide population becomes ever more fragmented, this area of the province is regarded as an important oribi stronghold.

Oribis have been naturally occurring residents on the farms here for generations, becoming woven into many landowners’ lives.

Moya Odendaal, whose family has lived on a farm outside Amsterdam since 1942, has been leading a fight against a recent spate of suspicious oribi captures and game auctions where the animals are sold.

“A short while ago, the only threat to our oribis we had to worry about was poaching. But in October 2015 that all changed when we spotted a helicopter flying extremely low over our property,” said Odendaal.

Since then, she said, there have been several incidents of unmarked helicopters flying over farms, apparently noting down the locations of oribi territories. The buck are subsequently darted and stolen, before being imported to game breeders in the Free State and KwaZulu-Natal, or sold through auctions.

Farmers in the area are also creating fenced-off camps to capture oribis on their properties, Odendaal said.

“We now fear a threat from our own farming community, as they take the wild oribis that have been living on our farms for generations. They use the excuse that they are saving the oribis from the threats they face in the wild, but the fact is that people have realised their financial value and are creating a false market for a species which is highly prone to stress,” she said. 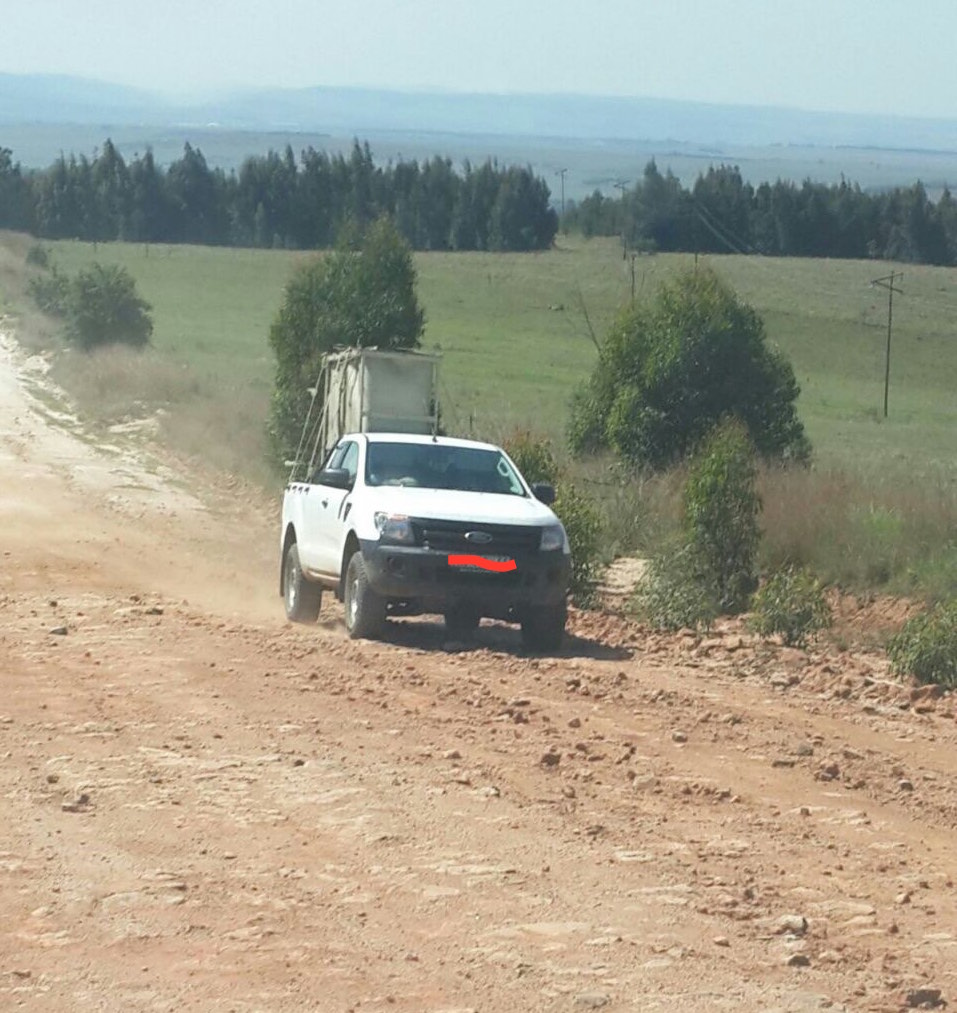 Rough road: A pair of oribis being transported to an auction in Ermelo. According to the Endangered Wildlife Trust, this pair did not survive. Photo: Mauritz de Bruin

Oribis do not respond well to capture, transport and captivity, said Petri Viljoen, an oribi expert and longstanding member of the IUCN’s Antelope Specialist Group.

“Even professional game captures often result in the death of oribis; the mortality rates are extremely high,” he said. “Many of the farmers are doing the captures and translocations themselves, which is worrying. Unfortunately, there doesn’t seem to be sufficient regulation in place to monitor the well-being of the animals.”

Viljoen said the oribis are also being sold off to hunting outfitters, despite a stringent list of restricted activities for which legitimate permits should be granted.

“According to the law, there should be very little chance of being granted a permit to hunt oribis, unless it’s in highly exceptional circumstances such as the animal being very old. There is definite suspicion around the granting of hunting permits,” he said.
Recent changes in legislation have added to his concerns.

Wildboere.com, a website serving the game industry, reported in July that 12 wildlife species, including oribis and other endangered antelopes such as tsessebes, roans, sables and blue duikers, have been added to a list of “tame and domesticated animals” under the Animal Improvement Act.

This legislation, which falls under the Department of Agriculture, Forestry and Fisheries, states that animals listed under the Act may be used “for the breeding, identification and utilisation of genetically superior animals in order to improve the production and performance of animals in the interest of the Republic; and to provide for matters connected therewith”.

The game farming industry welcomed the move, wrote journalist Adriaan Snyman on the site: “This alteration will allow game ranchers to breed and manage their wildlife similar to livestock farmers, which obtain animals with specific characteristics for agricultural purposes.”

However, the IUCN Antelope Specialist Group, a global organisation involved in monitoring protection of endangered antelopes, was not consulted about the legislation, Viljoen said.

“The first we heard about it was when we got news that the legislation had been passed. We are concerned about this as it allows for commercialisation of endangered antelope and opens up potential for unethical practices such as selective breeding,” he said.

“While game farmers are happy that they can now get financial gain from animals such as oribis, it’s a worrying move for conservation, especially since vital conservation role players were excluded from the process, possibly deliberately,” Viljoen said.

The Endangered Wildlife Trust (EWT), one of South Africa’s most important initiatives to protect oribis via its Oribi Working Group, was also not consulted about the legislation.

“It’s not a good thing at all. Apart from being difficult to hold in captivity, oribis easily lose fear of predators and if they are then released into the wild, it’s essentially a death sentence,” said Ian Little, the EWT’s Threatened Grassland Species programme manager.

The agriculture department did not respond to emailed questions regarding the motivation behind the legislation and why environmental organisations were not consulted.

Research by the EWT indicates that only about 40% of relocations of oribis from auctions have been successful. Research by a master’s student at the University of KwaZulu-Natal found a 10% success rate of oribi relocations in that province.

“This is likely due to the majority of relocation sites not meeting all the basic criteria required for a successful relocation, such as careful recipient site selection, the removal of threats, and determining whether there is a possibility of the relocation resulting in the establishment of a viable population,” Little said.

The EWT is trying to stop all auctions of oribis in South Africa, and Mpumalanga is the only remaining province where such auctions are permitted, he said.

Landowners in Mpumalanga appear to be cashing in: oribis fetched between R60,000 and R80,000 each on auction in Ermelo last year, although the figures dropped in 2016. At the last auction held by Hoeveld Bomas in Ermelo, on August 13 2016, three pairs of oribis were sold to a breeder in KwaZulu-Natal for R20,000 each. 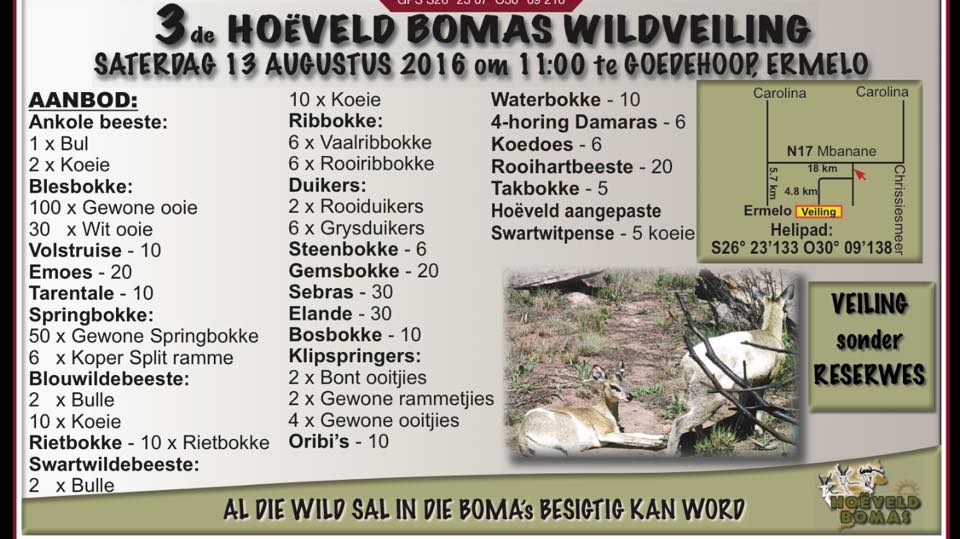 Through a Promotion of Access to Information Act request to the Mpumalanga Tourism and Parks Agency (MPTA), the Centre for Environmental Rights obtained copies of all applications and permits granted or refused in respect of oribis in the province in the first half of 2016.

The documents show that approval was granted for the capture, transportation and cross-provincial export of 55 oribis from farmers to game breeders or auctions in Mpumalanga and the Free State, between March 9 and June 28 2016.

Lawyer Aadila Agjee said the permits did not state whether regulations that apply to threatened or protected species (ToPs) were taken into account when removing the oribis from the wild or hunting them.

“In order to carry out any activity in relation to ToPs-listed species, a permit is required. It is difficult to state definitively, on the basis of the documents provided, whether there has been compliance with the relevant environmental laws, but on the face of it, it appears that the authority which issued these permits has not complied with the ToPS requirements,” Agjee said.

The permit applications did not contain information on the origins of the oribis. “On the face of it, therefore, the permits appear to have been granted without the issuing authority satisfying itself that the oribis are legally held by the people who are auctioning them for sale,” she said.

The MTPA, which is responsible for processing the relevant permit applications in the province, said it does not issue ToPS permits.

“However, the Mpumalanga Nature Conservation Act allows landowners to apply for permits. These applications are dealt with in accordance to protocols. We are of the view that [in] an application of any permit, appropriate legislation has to be adhered to,” said MTPA spokesperson Kholofelo Nkambule.

She said permits for relocations were approved because illegal hunting with dogs was becoming a bigger risk to the survival of the species.

“To move oribis from areas where they are threatened to registered projects or to suitable areas with the necessary permits for their protection, would ensure their survival,” she said.

“Some of the farmers where oribis were caught have registered oribi breeding projects where very successful, intensive captive breeding takes place. Certain criteria needed to be met and management plans drafted by an accredited ecologist before the project could be approved and registered. To our knowledge, only three oribis have died since the first auction,” Nkambule said. 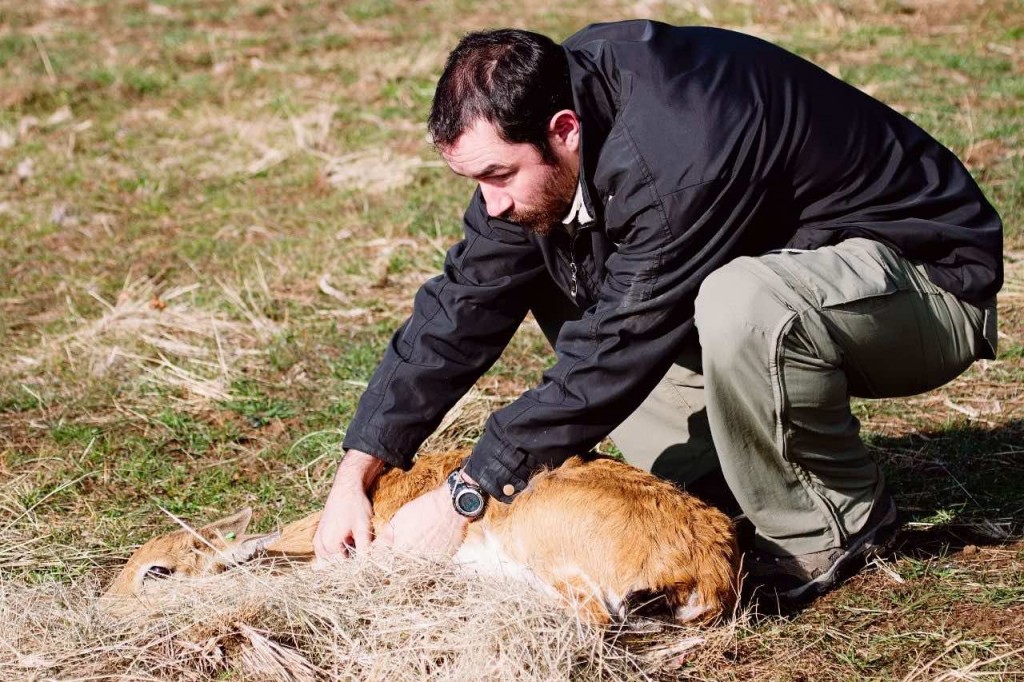 Every year between September and November, the EWT Oribi Working Group coordinates surveys of South Africa’s oribi population through consultation with landowners and protected areas managers.

The 2015 survey, based on 205 returns, counted a total of 2,382 oribis. This was significantly lower than the 2014 number of 3,006 individuals, based on 266 returns. The EWT says the population has undoubtedly been negatively affected by drought conditions and sustained poaching pressures.

The working group believes that, despite the MTPA’s assertions, irresponsible sales and ineffective relocations are only adding to the existing threats facing wild oribi populations.

Several population crashes have occurred in areas where oribis have been captured, said Little.

“Two good examples are Chelmsford Dam and Wedgewood [in KwaZulu-Natal], both of which saw significant population crashes after a subset was captured and translocated.

“Based on the extremely low success rate of relocating oribis and the fact that these auctions are not part of a conservation intervention, we feel strongly that no more permits should be issued for the auction of oribis, unless all of the necessary precautions and criteria for assessment have been adhered to.

“We suggest that oribi relocations should be authorised for specific conservation interventions only,” Little said.

Dale Hes is a journalist with The Write News Agency, based in Mpumalanga. This investigation was a collaboration with Oxpeckers Investigative Environmental Journalism.

PERMIT DOSSIER: Through a PAIA request, the Centre for Environmental Rights obtained permit applications relating to all activities involving oribis in Mpumalanga during the first six months of 2016. The documents are shared below: