Tales from the coalface 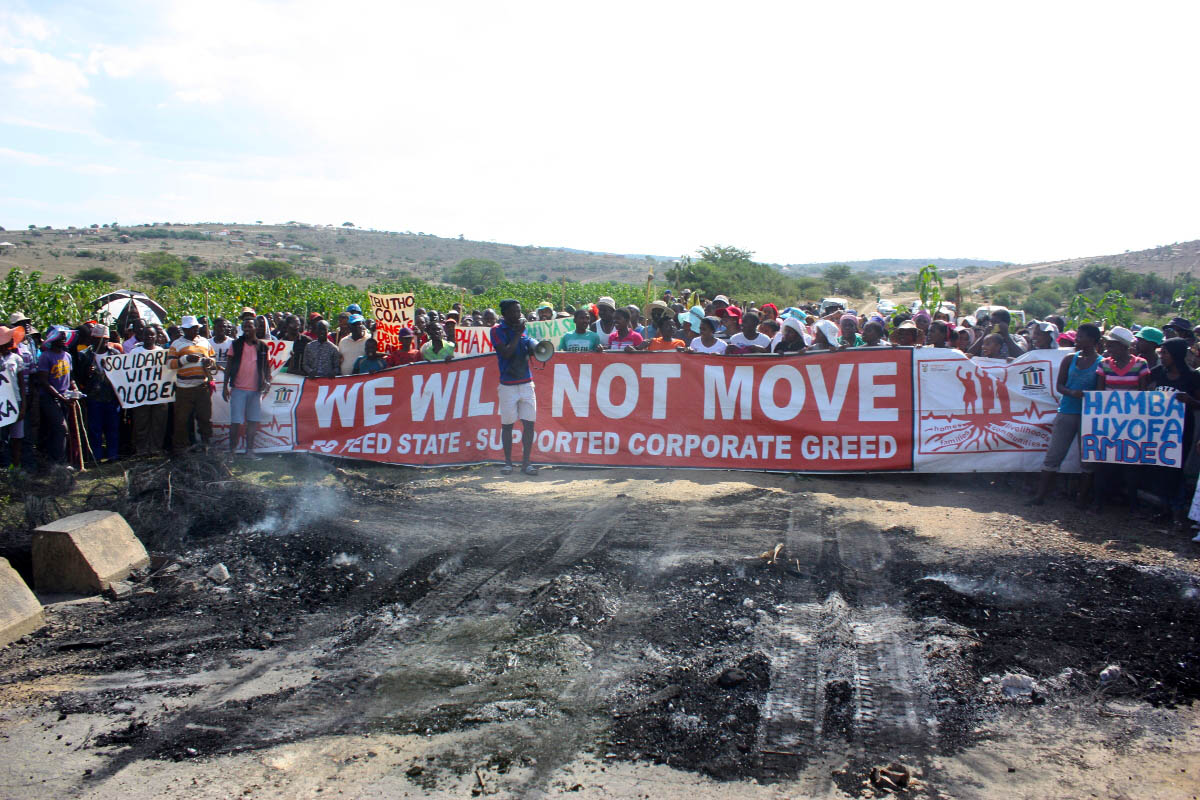 16 Sep Tales from the coalface

Activists face uphill battles when they push back against mining companies. Their stories include violence, secret deals, a lack of access to information and unenforced laws. Mark Olalde investigates 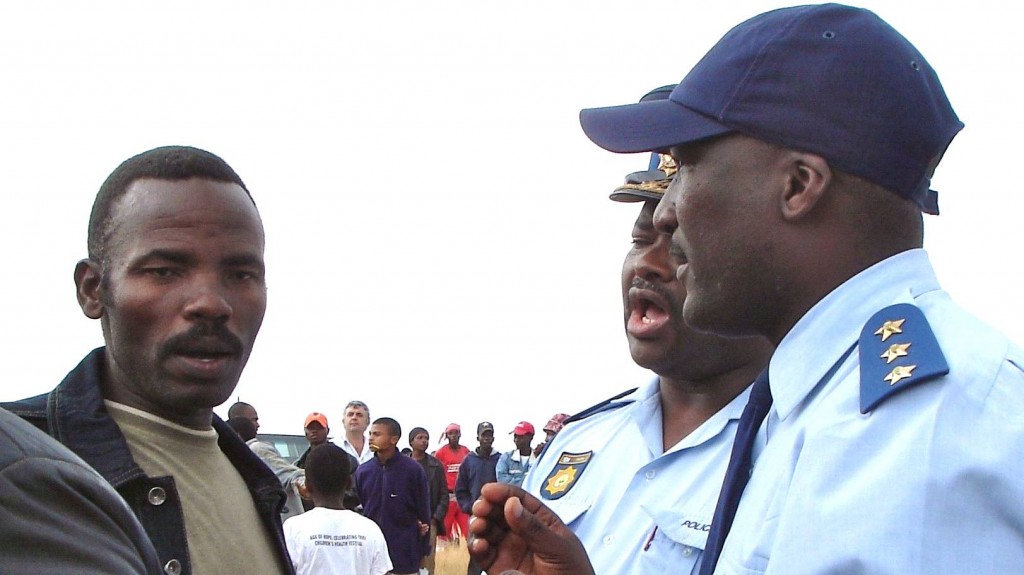 The late Sikhosiphi ‘Bazooka’ Radebe, former chairman of the Amadiba Crisis Committee, speaks with police. Radebe was murdered in March, with many speculating that his death was a direct result of his opposition to mining near his community. Photo courtesy Nonhle Mbuthuma

There is a script for the struggle between activists and mining companies in South Africa. From the discovery of a valuable resource to a company’s promises and a community’s protests, similar fights over mining projects constantly play out across the country.

Then the plot twisted. Men impersonating police officers arrived at Radebe’s house, blue lights flashing, and gunned him down. Radebe was shot eight times and died with his son close enough to count the rounds.

The killers’ motive was widely believed to be Radebe’s stance against mining.

Death on the Wild Coast

“We are not safe since this company arrived in our area. Each and every year, somebody dies in different ways. It’s either you’ve been poisoned, either you’ve been killed by the gun. Right now, we are afraid for our lives,” ACC secretary Nonhle Mbuthuma said.

Under constant threat of violence, the ACC takes on both mining companies and traditional authorities. Mbuthuma said Xolobeni residents are afraid of the dust mining would generate, the crime the migrant labour system might bring and the loss of vitally important agriculture and grazing land.

“Once we lose land, we lose everything. We lose our identity. We don’t know who we are,” Mbuthuma said.

The ACC claims the area’s traditional authorities made deals with MRC without first earning a mandate from constituents. This is a common theme among poor, rural communities with communal land, with mining companies often identifying traditional, or tribal, authorities with whom to consult rather than the broader community.

In one instance, the ACC alleged a specific chief received benefits such as a vehicle from the mine. He was also listed as a director of a BEE company with a stake in the project. In a letter to a consulting firm retained by the mine, the chief affirmed community-wide support for mining in Xolobeni, even though much of the community was engaged in widely publicised protests.

In July, MRC announced it had signed a memorandum of understanding with its BEE partners to fully divest its holdings in the mine. Due to the “significant social disintegration and highly volatile nature of the current situation” in Xolobeni, on September 15 the minister of mineral resources placed an 18-month moratorium on mining or prospecting in the area.

Attempts by Oxpeckers to obtain comment from the BEE companies involved were not answered, and a media relations representative from MRC declined to comment. 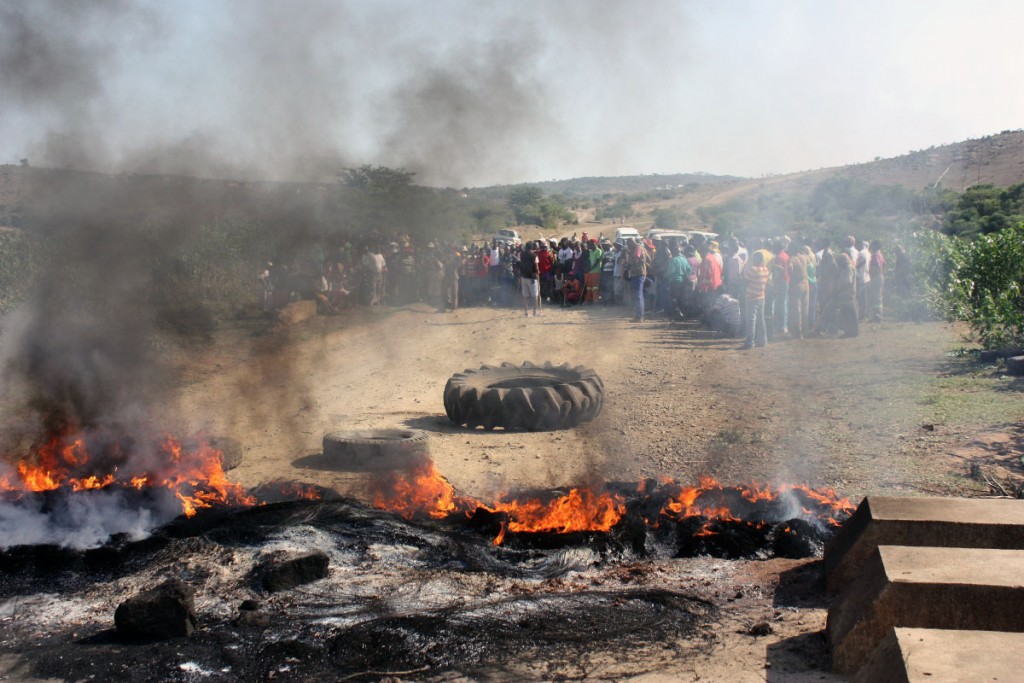 Protesters block the road to halt a visit by the regional mining, development and environmental committee to the proposed site of a new Ibutho Coal Company mine. Anti-mining activists say the mine will negatively impact their health and that of the Hluhluwe-Imfolozi Park. Photo courtesy Phila Ndimande

In April, when regional government representatives tried to complete a site visit and meet stakeholders at Ibutho Coal Ltd’s proposed mine near Fuleni in KwaZulu-Natal, community members from the seven surrounding villages blocked the road, covered it with burning tyres and displayed a large banner shouting, “We will not move”.

Phila Ndimande is a member of the Mfolozi Community Environmental Justice Organisation, which represents residents of the Fuleni area. He said the organisation was created in 2015 because tribal authorities and local ward councillors were not recognising nor engaging with other community groups.

According to Ndimande, most of the community has rallied around his organisation. “The people are not interested in the proposed coal mine,” he said. “We are like their ambassadors. We are all the time prepared to struggle against the proposed mine.”

The community coalesced against the operation, in part, because many locals have relatives living adjacent to another coal mine, the Somkhele Mine, only 20 kilometres away. They saw the impacts – dust fallout, houses cracking from mine blasting and unfulfilled promises – and they did not want the same.

“When [mining companies] come, they promise the people, and at the end they don’t fulfill their promises. So why must we fall in the same trap?” Ndimande said, adding that Ibutho guaranteed jobs even though his community is poor and does not have the education necessary for skilled positions.

Initially, Ibutho attempted to open communication with the community but was rebuked over alleged secret agreements struck with tribal authorities.

“When they started approaching the community, it was a bit late because they had already made some deals with the tribal authorities,” Ndimande said. “Since then, they’ve just been doing things their own ways without involving us, the community.”

As happens around the country, the mining company’s communications and literature are prepared in English. However, most of the local community cannot read nor speak English and would instead benefit from isiZulu translations.

Ibutho did not respond to requests for comment. According to the company’s website, “Community engagement on various levels took place throughout all phases of the project and will continue throughout the EIA Phase.”

Listen: Mark Olalde talks to the Bench Marks Foundation and the Chamber of Mines about mining-related assassinations and related issues:

Misinformation in the Karoo

When fracking loomed as a threat to the Karoo’s environment in 2012, local opposition rose to challenge the new extractive industry. Since falling estimates of shale gas reserves and a slow permitting process paused the fracking debate for the moment, activist attention has shifted toward the prospect of uranium mining in the water-strapped region.

Edgar Marthinus, a member of the Karoo Environmental Justice Movement, said the group’s major task is organising people in towns scattered across the Karoo and disseminating information.

Part of the group’s work – and that of community-based organisations across the country – is obtaining information that according to the law should be in the public domain but which is hidden by the mining companies or the government.

According to Marthinus, Peninsula Energy Ltd – an Australian mining company applying to mine uranium at its Tasman RSA operations in the Karoo – offered the community exaggerated promises on topics such as job creation.

In 2015, Peninsula submitted mining right applications covering 750,000 hectares. This May and June, the company withdrew the applications and resubmitted applications for a more specific area.

Tefo Maloisane, spokesperson for Peninsula, responded that the company “recognises it has a moral and ethical obligation to conduct business in a responsible manner, not only towards environmental matters, but also towards the communities within which it operates and society as a whole”. 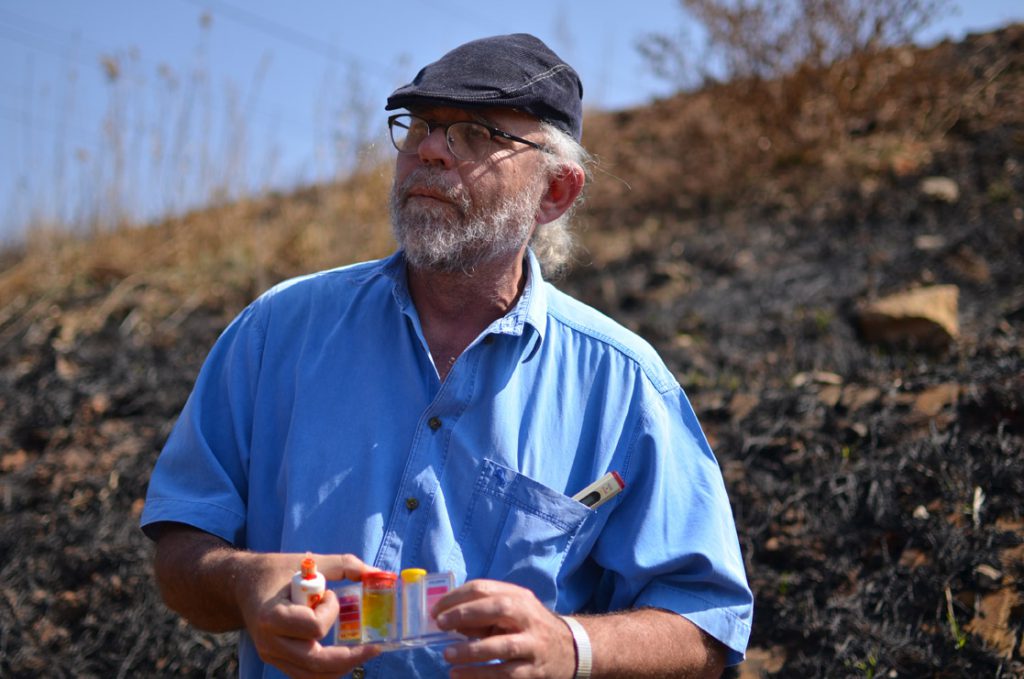 The memory of the 2010 World Cup resides alongside Soccer City, the speckled stadium sitting on the border between Johannesburg and Soweto. However, a less joyous part of the country’s memory sits just over the road, in the form of extensive gold mine tailings piles.

On the north side of the piles, the Riverlea community wages an ongoing struggle against re-mining operations and dust.

“The problem every year from about August onwards, depending on how long the windy season goes on, is the dust that blows off those tailings dams into the community, causing very, very severe respiratory stress,” said David van Wyk of the Bench Marks Foundation, an independent organisation that monitors corporate social responsibility.

Van Wyk began assisting Riverlea’s community organisations four years ago, and he wants DRDGold, the company re-mining the tailings dams, to do more to protect the community’s health.

In an interview with Oxpeckers regarding Riverlea last year, DRD chief executive Niël Pretorius said it was unclear if the mine dumps were affecting the neighbourhood. He pointed out that DRD had collected data from 94 dust buckets, and he said the use of coal stoves could cause the same problems the community blames on mine waste.

There are no large epidemiological studies on near-mine communities in South Africa. Even though polluted streams run from the dumps and even though elevated dust levels are immediately evident on windy days, Riverlea’s health impacts cannot yet be proven.

Mining companies are obliged to mitigate both environmental and social impacts, and through social and labour plans, companies must demonstrate how they will benefit affected communities.

Tebello Chabana is the director of public affairs for the Chamber of Mines, which represents about 90% of South Africa’s minerals extraction industry. He said poor communication manifests itself in social and labour plans.

This was the case in Riverlea when DRD tried to donate several hundred gas stoves to households near the mine, ostensibly to reduce health issues caused by burning coal. However, the community was not thoroughly consulted about the plan and rejected it because residents could not afford to refill gas bottles.

Van Wyk argued that companies should listen to affected communities instead of making assumptions about what might be helpful. “Mines need to address their impact, not do charity,” he said. – oxpeckers.org

#MineAlert is a website and mobile app that alerts residents and organisations to mining applications and licences in their regions. Use the app by clicking on the links to find data related to this story:
• Wild Coast mine
• Fuleni mine
• uranium mines in the Karoo
• re-mining dumps in Riverlea