Harry the desert lion a victim of Namibia’s drought 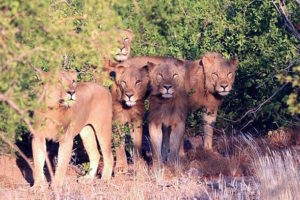 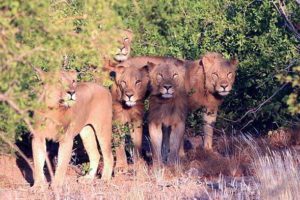 The Five Musketeers are desert-adapted lions that manage to survive in the incredibly harsh conditions of the Kunene rock desert and adjoining Skeleton Coast Park. Photo courtesy Desert Lion Conservation, at https://www.desertlion.info/

Not even being famous or royal will protect you from Namibia’s crippling drought, writes John Grobler

Namibia’s famous desert lion Harry, named after the British prince, has been shot dead by communal cattle farmers in Kunene.

Two of his bothers in a lion coalition called the Five Musketeers were wounded in the shooting in mid-June. The five lions are the subject of pioneering research featured in the award-winning documentary Vanishing Kings.

The incident is one of an increasing number of human-wildlife conflicts as cattle farmers in Namibia faced with crippling drought keep pushing deeper into areas reserved for conservation.

Lion researcher Dr Flip Stander confirmed the shooting on his webpage, which also published pictures of the two young male lions, one with a bullet wound in the abdomen.

Since 2012 a crippling drought has decimated both wildlife and livestock in the northern regions of Namibia.

Environment Minister Pohamba Shifeta recently directed sharp criticism at farmers who, in search of grazing, enter areas that had by common agreement been set aside for conservation.

However, compelling farmers to reduce the number of livestock was not politically feasible, he said.

The Five Musketeers are part of a small but growing group of desert-adapted lions that manage to survive in the incredibly harsh conditions of the Kunene rock desert and adjoining Skeleton Coast Park.

Like the desert-adapted southwestern black rhinos found in the same area, they share their range with a growing local human population that has been equally hard-hit by the drought.

Several fountains that sustain the animals have dried up, forcing wildlife ever closer to human settlements and their cattle. At least 40 of the critically endangered black rhinos have died since 2012 at the hands of poachers and from the effects of the drought.

The Purros area where Harry was shot has long been a hotspot of human-wildlife conflict, despite efforts by conservationists to build stronger cattle enclosures and encourage better cattle management practices.

A controversial “shoot-and-sell” policy that allows the large-scale commercial hunting for quick cash for the local community has added to the conflict by decimating the lions’ natural prey.

While the southern Kunene region received some good rains in March, the cumulative impact of an increasing local population and more livestock – the sole source of income in this impoverished area – has devastated grazing.

Geohydrologist Frank Bockmühl, who has been working in the area since the early 1990s, estimated that in some places up to a metre of topsoil has been lost to wind erosion.

This erosion and loss of plant growth was causing rain water to run off much faster than normal, leading to a steady depletion of groundwater, he warned.

To see how climate change is affecting other parts of Southern Africa, use the Oxpeckers ClimaTracker app