SA’s maize crop down 36% due to drought 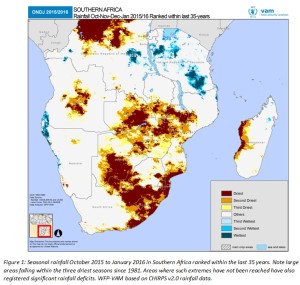 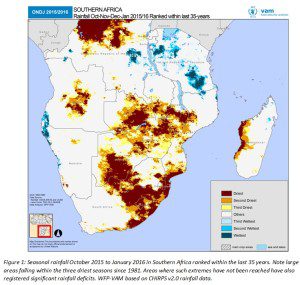 This season’s rainfall, compared to the past 35 years. © WFP-VAM

South Africa has issued a preliminary forecast of maize production for the coming harvest of 7.4 million tonnes – a drop of 25% from the already poor production levels of last season, and 36% below the previous five-year average, according to the South African Grain Information Service.

The current rainfall season has so far been the driest in the past 35 years across large swathes of Southern African, resulting in significant delays in planting and very poor conditions for early crop development and pasture re-growth.

In many areas, planting has not been possible due to 30- to 50-day delays in the onset of rains, resulting in widespread crop failure.

Although there has been some relief since mid-January in certain areas, the United Nations Food and Agriculture Organisation (FAO) warned on February 12 that the window of opportunity for the successful planting of crops under rain-fed conditions is nearly closed.

“Even assuming normal rainfall for the remainder of the season, cropwater balance models indicate poor performance of maize over a widespread area,” FAO said in a joint statement with the World Food Programme, Famine Early Warning Systems Network and the European Commission’s Joint Research Centre.

Seasonal forecasts from a variety of sources are unanimous in predicting a continuation of below-average rainfall and above-average temperatures across most of the region for the remainder of the growing season.

“The combination of a poor 2014-2015 season, an extremely dry early season (October to December) and forecasts for continuing hot and drier-than-average conditions through mid-2016, suggest a scenario of extensive, regional-scale crop failure,” the agencies said.

This drop has increased the region’s vulnerability due to the depletion of regional cereal stocks and higher-than-average food prices, and has substantially increased food insecurity.

“The numbers of the food insecure population are increasing due to the current drought and high market prices. Maize prices in South Africa and Malawi were at record highs in January.”

While it was too early to provide detailed estimates of the regional population likely to be food-insecure in 2016-2017, the agencies said, “it is expected that the population in need of emergency food assistance and livelihood recovery support will increase significantly.

To see how else climate change will affect you, use the Oxpeckers ClimaTracker app.