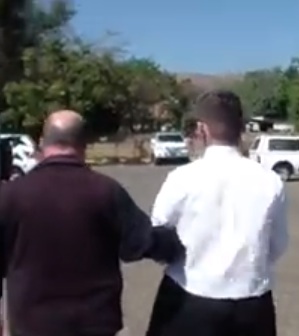 The alleged kingpin of the syndicate was arrested in front of the Pretoria North Magistrate’s Court.

South Africa’s elite police investigation unit known as the Hawks arrested the alleged kingpin of one of the biggest and most violent rhino poaching syndicates on Friday morning, September 19.

Members of the syndicate, accused of obtaining 84 rhino horns via illegal means, are due to appear in the Hatfield Magistrate’s Court in Pretoria on Monday, September 22 – World Rhino Day.

The arrest was reportedly part of an operation led by the Hawks, who pounced on the alleged gang boss and nine other syndicate members simultaneously in various parts of the country.

The alleged head of the syndicate was nabbed in front of court as he was due to appear on charges of illegal possession of scheduled substances and firearms.

Photo and video courtesy The Citizen

The Citizen reported that one of the suspects is a warrant officer for the Organised Crime Unit in Pretoria. Others include the alleged kingpin’s wife, attorney, brother, a pilot and a professional poacher.

The syndicate is believed to be responsible for the brutal slaughter and mutilation of 24 rhino, including a pregnant cow and a small calf, in state and privately owned reserves around the country, between June 2008 and June 2012.

Twenty-two of the rhinos were apparently darted with a potent tranquilliser known as M99, and two rhino were shot with a firearm. Only two of the poached rhinos survived the attacks.

According to the newspaper, the syndicate’s main aim was to acquire as many rhino horns as possible for sale to the Asian black market, specifically Vietnam.

The syndicate is alleged to have obtained up to 84 rhino horns by poaching rhino, as well as stealing the horns and obtaining them in other illegal ways: 41 of the horns were taken from 24 rhinos that were poached; 14 horns were stolen – some taken from a government building in Giyani – and 29 were obtained by other means.

About 318 charges will be laid against the suspects.