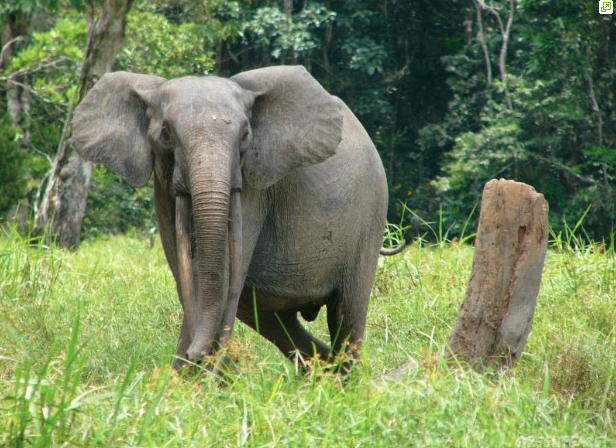 Today the forest in the Central African region is fast disappearing: Between 1990 and 2000, approximately 91 000km2 of forests were lost. That represents an area about three times the size of Belgium.

The significant deforestation and the decline in the elephant populations are having enormous impacts on the biodiversity of the region. In Cameroon, where I base my research, 13% of the forest has already gone (between 1990 and 2005) and the Central African region has lost 60% of its elephant population to poaching in the last 10 Years (Maisels et Al 2013).

The CITES MIKE Programme says the Central African region is the zone to have recorded the highest illegal elephant killings since 2002 compared to other zones of observation in Africa.

In 2013, Cameroon experienced the massacre of 400 elephants in the Bouba Ndjida National Park.

There are only 90 000 to 150 000 elephants now left in the Central African region. This observation is drawn from comparing different reports about African elephants from the IUCN, CITES, African Elephant Specialist Group, Elephant Trade Information system (ETIS) and the Elephant Database.

“Elephants disappearing is of course detrimental and has a massive impact on the forest ecosystem. Elephants going extinct means that the competitive balance of many, many species – arguably over 100 in Central Africa – will be tipped over,” say Blake and Campos-Arceiz, authors of a paper on African and Asian elephant seed dispersal in Acta Oecologica.

Elephants are termed by IUCN and WWF as ecologically important species, which play a vital role in supporting other species and ecosystems.

Elephants have a great seed nursing and transportation potential, necessary for forest growth. The heavy-weight land mammals are among the greatest seed dispersers on the Earth, findings confirmed by recent studies from scientists.

Seed dispersal, ecologists believe, is the movement or transport of seeds away from the parent plant through biotic (living things) or abiotic vectors.

Elephants are biotic vectors and transport thousands of seeds through their digestive system and send the seeds out through their guts. The dung then serves as incubator for the seeds to germinate, absorbing water, heat and other gases like CO2 it may need for its survival.

Ahimsa Campos-Arceiz believes “African forest elephants are the ultimate seed dispersers” and confirms they disperse seeds in the most efficient way.

From the ecological perspective, scientists argue that elephants are very important for forest growth because they spread seeds hundreds of kilometres away from the mother plant.

The greater their population and habitat increase, the greater the forest expansion. Elephants in the Congo are able to spread seeds as far as 57km from the mother plant.

Up to 20 percent of global warming is caused by deforestation. If REDD+, the UN programme for reforestation, could join forces with the governments of the Central African region and other NGOs to stop deforestation and poaching, that will be a solution to fight against climate change.

What about food security? “Forest and tree ecosystems underpin the provision of a range of services, and as such, when appropriately managed, can make vital contributions to food production,” say Foli et al in their Environmental Evidence paper 2014.

But before that, they have to empower governments by helping to eradicate corruption. According to Transparency International’s CPI for 2013, there is likely to be a high level of deforestation and logging in countries where governance is weak, and vice versa. Many of the countries in the Central African zone are among the most corrupt countries in the world.

Israel Bionyi works at the Society for Conservation Biology