Posted on 7 Jan, 2014 by Oxpeckers Reporters

Minister of the Environment, Wildlife and Tourism dispatched a team of investigators following exposé by Lawrence Seretse

Tshekedi Khama, Botswana’s Minister of the Environment, Wildlife and Tourism, has dispatched a team of investigators to probe how lions exported from Botswana under the auspices of his ministry ended up in a canned hunting facility in South Africa.

Khama said that when Botswana’s Minister of Agriculture, Christiaan de Graaff, made the decision to sell what were now his lions, the Department of Wildlife and National Parks assisted by issuing the export permit and finding a facility for the 22 lions.

He said they contacted their counterpart ministry in South Africa’s Free State province as part of due diligence and were assured that the farm to where the lions were destined was free of canned hunting practices.

Khama maintained that he was lied to and said his office would investigate to determine whether the misleading information came from the South African authorities, or if someone in his ministry was implicated.

“What did I tell you I will do if I find out I have been lied to?” he responded when asked what action he would take if he was lied to. “I will find out and the right action will be taken.”

It is understood that in late December 2013, following exposure of the lion deal, a team of investigators was dispatched to the Free State town of Boshof to look into Makhulu Game Farm, owned by Henk J Vorster. 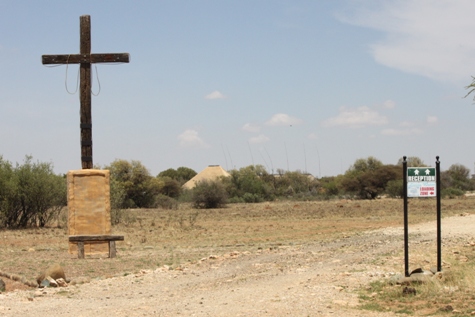 The entrance to the canned hunting facility in the Free State

This is the farm to which De Graaff sold 22 lions after the Department of Wildlife and National Parks gave him the green light. Oxpeckers and Mmegi newspaper in Botswana exposed how the 22 lions sold by De Graaff were found at a canned hunting farm in South Africa, waiting to be stripped for cash by trophy hunters.

Khama was not prepared to say what actions would be taken against department officials, or whether De Graaff would himself be investigated for his involvement in the lion trade.