Rhino trafficking: Down the rabbit hole at Kruger 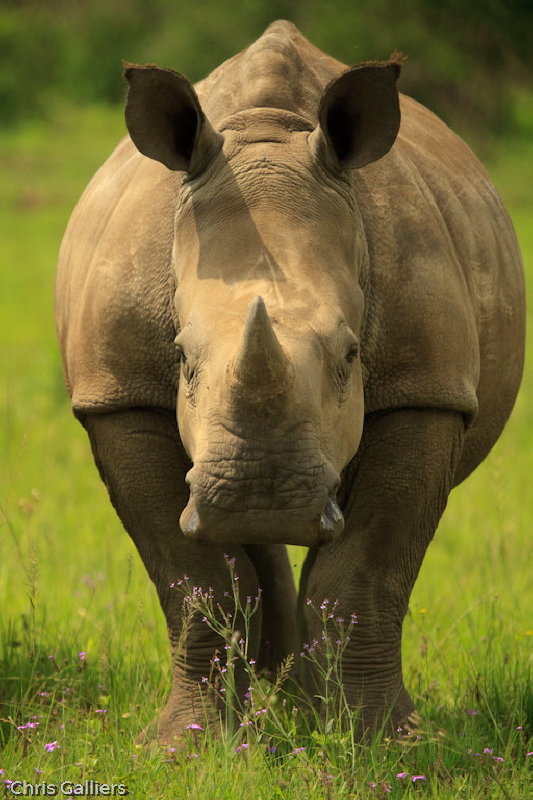 08 Jul Rhino trafficking: Down the rabbit hole at Kruger

Posted on 8 Jul, 2013 by Oxpeckers Reporters

Rogue South African trophy hunters are directly involved in ‘a mad scramble’ to poach rhinos and get their horns out of the Kruger National Park, according to reliable intelligence sources. The horns are sold illegally, which is facilitated by layers of corruption among customs officials and Mozambique’s politicians. By Fiona Macleod & Estacio Valoi 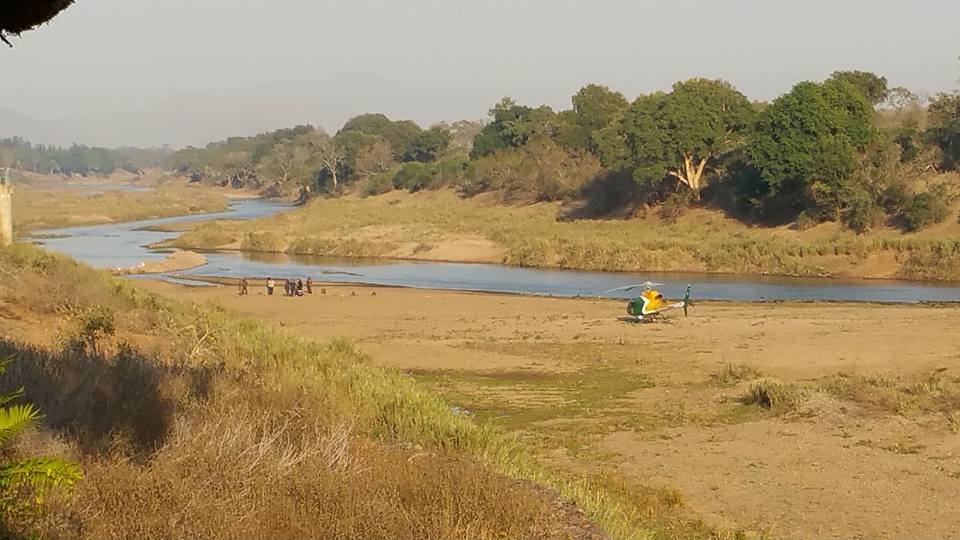 The southern border of the Kruger National Park. Rangers arrested eight poaching suspects along the Crocodile river in August 2015

Documents in the possession of Oxpeckers show the errant trophy hunters are supplying Mozambican poachers with ammunition and helping them to sell the horns illegally. They manage to avoid apprehension by bribing local officials and courting influence with Mozambican politicians.

The hunters run safari outfits along the south-eastern border of the Kruger, and they gain access to the park through gaps in the fence between the two countries. They cannot be named owing to the seriousness of the trafficking allegations against them.

They operate in the vicinity of Corumana dam and the former Magud headquarters of Mozambique’s Renamo movement. Corumana dam is a popular destination among birders and fishers, and is being expanded to supply water to Maputo about 30km away.

“During the day Corumana is serene, but at night you hear the traffic of boats with engines plying their illegal trade. There is a mad scramble to get as many rhino horns out of the Kruger Park as possible,” said a fisherman who visited the area recently.

Independent intelligence sources have been monitoring the hunting operators since 2011. They say they have passed their information on to anti-poaching authorities in South Africa, but have received no feedback on whether it has been followed up.

Confidential documents reveal that the kingpin is a safari outfitter with a hunting concession close to Corumana dam. He regularly hunts wildlife without permits, according to intelligence, and smuggles animal trophies and rhino horns in a hidden compartment of his vehicle.

The documents implicate him directly in the poaching of rhinos in southern Kruger and the smuggling of their horns to Maputo and South Africa. He is also accused of bribing the local police chief to drop charges against poachers working with him.

Other hunters fingered in the investigation since 2011 include a safari outfit previously caught luring lions out of the Kruger for “canned” hunts, and another outfit previously implicated in ivory smuggling in Namibia. The network has formed strategic alliances with politicians and prominent business in Mozambique for protection, according to the intelligence. 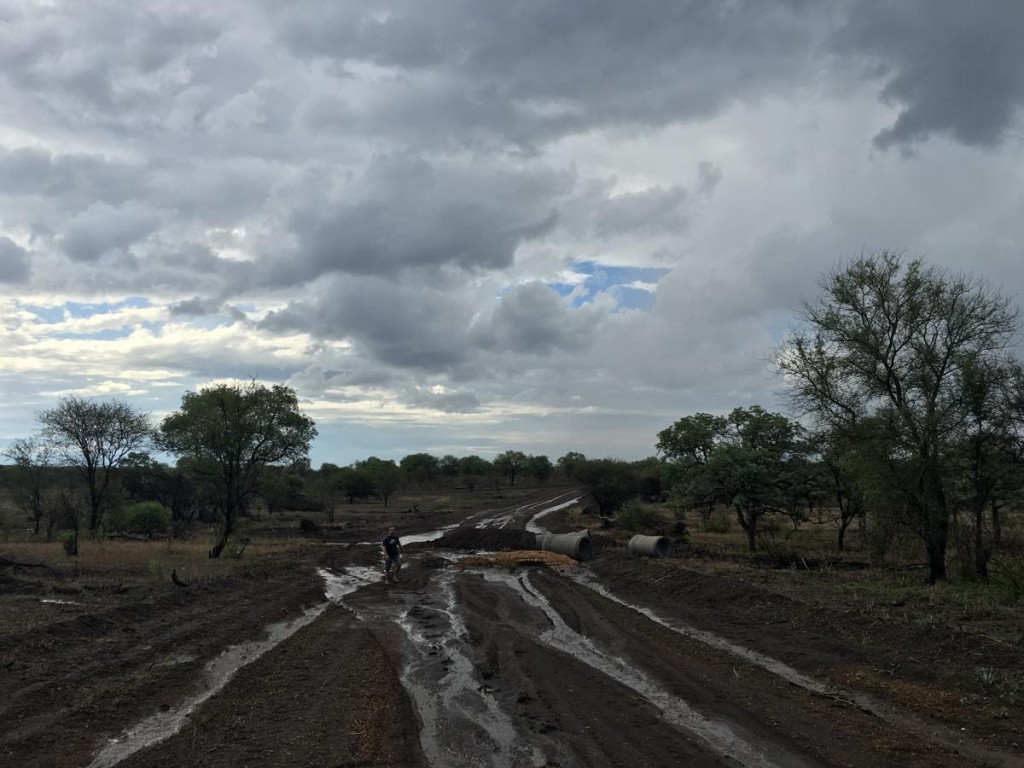 The road on the Mozambican side of the border is in poor condition and, when hard rains fall, often becomes impossible to travel. Photo © Martin Totland

The role of South African provocateurs in rhino-horn trafficking in Mozambique was raised during a high-level ministerial meeting between the two countries in mid-June. Carlos Pereira, a Mozambican conservationist who advises the tourism ministry, says it was discussed during a meeting between Carvalho Muaria, Mozambique’s Tourism Minister, and South African Environment Minister Edna Molewa.

“According to the Mozambican military, there is serious South African involvement in poaching along the border. It even seems that some of the poachers just get their Mozambican nationality given to them when they are inside the Kruger park,” he said.

The two countries aim to sign an agreement by next year to cooperate on cross-border poaching that has turned the trans-frontier area along eastern Kruger into a mini-war zone. According to data produced during a Forum of African Investigative Reporters exposé earlier this year, nearly 300 Mozambicans have been killed in anti-poaching operations in the Kruger since 2008, and more than 300 have been arrested.

In the same period, between 2011 and now, official South African figures show that close to 1,000 rhinos have been poached in the Kruger. In response, in 2011 the South African National Defence Force deployed about 260 soldiers to patrol the park and its borders, and on June 11 this year Molewa announced that the government had allocated R75-million to combat poaching in national parks over the next three years.

For the Mozambican government, a concern is that former combatants involved in that country’s civil war are now being drawn into the poaching fray. According to intelligence sources, there is evidence some poachers have recently received military training on hunting farms in Mozambique, and most of the poachers caught inside Kruger are armed with both AK47s and hunting rifles.

Gun experts say while the AK47s are used for personal protection by poaching gangs, their small calibre makes them unsuitable for shooting rhinos. The marksman’s weapons of choice are .375 and .458 hunting rifles, and more recently Brno CZ 550 rifles imported from the Czech Republic in Eastern Europe.

Maputo has two large gun shops and hunters need a licence to buy hardware, says Pacheco Faria, representative of the Association of Mozambique Operators, a voluntary hunting regulatory body formed in 2011. Going through the official channels to get a rifle can take up to six months, he says.

According to the intelligence documents, however, “people of influence” in Maputo are doing a roaring trade in rifles and are passing them on to poachers. Requests for lists of who is buying the guns have been denied.

Faria says Mozambique has 64 licensed hunting companies and “about 40 are regular outfits”. None of the names implicated in Kruger rhino poaching are members of his association.

“We have a system in place, but whether it is operating 100% remains to be seen,” he said. “The area along the Kruger border is very remote and to patrol it is not easy.”

Adri Kitshoff, chief executive of the Professional Hunters’ Association of South Africa (Phasa), recognised one of the names as a member of her association. He was stripped of his membership in the 1990s, but had since re-joined Phasa and is in good standing, she said.

“Phasa is totally against illegal actions and abuse of the trophy permit system, but we can only take disciplinary action against our members if they are arrested or a complaint is laid against them with the facts,” Kitshoff said.

Recent arrests of suspected poachers along the border highlight the use of hunting rifles. On June 10, for instance, South African authorities announced the arrest of three suspects in the Tshokwane section of the park with a high-calibre hunting rifle, silencer, ammunition and an axe.

On June 12 Mozambican authorities announced they had seized three Mauser rifles found in the possession of suspected poachers operating in the northern border region. And on June 22 a poacher caught crossing the fence on to a Mozambican game reserve in the middle section of the park’s border was carrying a Brno CZ 550 rifle with a threaded barrel for fitting a silencer.

Asked whether the Kruger’s anti-poaching task team was aware of the involvement of South African hunting outfits on the Mozambican side of the border in poaching Kruger rhinos and other wildlife, South African National Parks spokesperson Isaac Phaahla said: “There has been no indication from our investigations to indicate any involvement of hunting outfits based in Mozambique. If anyone has any information to the contrary, we would like to ask them to share it with the relevant law enforcement authorities.”

The task team had not received any information from Mozambican authorities indicating poachers were being formally trained in Mozambique, he said. Phaahla could not say how many hunting rifles had been confiscated in the Kruger in recent months.

This three-month investigation by Oxpeckers Center for Investigative Environmental Journalists and members of the Forum for African Investigative Reporters was funded by the Swedish International Development Cooperation Agency. It was published in October 2013.