With no water in the taps and bone-dry dams, residents of small towns in the Northern Cape get by on a wing and a prayer. How do they survive?

In Calvinia people had forgotten what rain smells like. The biggest town in the Hantam-Karoo district of the Northern Cape is slowly dying of thirst. Its main water source, the Karee Dam, dried up at the end of last year and the few boreholes left are in dire straits.

Calvinia is a quaint town with a large farming community, surviving on a wing and a prayer. It is currently South Africa’s driest town, and due to climate change predictions, its future looks bleak.

Water donations from all over South Africa are streaming in, but most of the people know this is only a Band-Aid for the day when the last drop of water flows out of the taps. Water restrictions are severe. 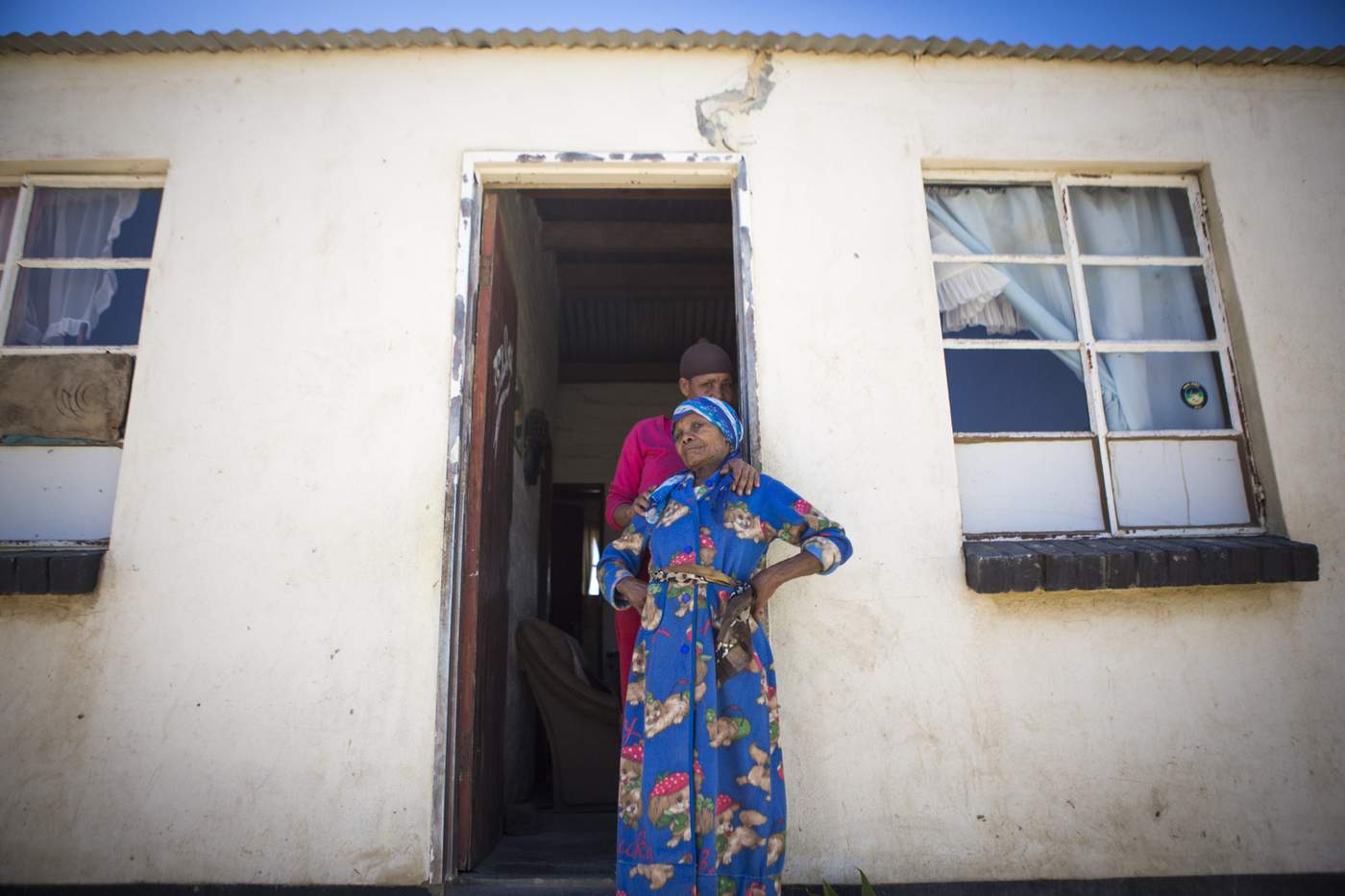 “In my lifetime I have never seen a drought this bad,” said Wilhelmina Opperman (82) in her small home in Blikkiesdorp, Calvinia’s poorest neighbourhood mostly made up of shanty houses (Blikkiesdorp means Tintown in Afrikaans).

“Praise the lord, but He knows that I can’t live without water. The water from the boreholes may be salty and brackish, but I cook with it and I wash with it. I believe that Jesus will provide,” she said.

Prayers for rain are as common these days in Calvinia as the sought-after Karoo lamb that the district was famous for. Except lamb was not all that common anymore, and instead of organising meat festivals farmers are organising Pray for Rain gatherings. 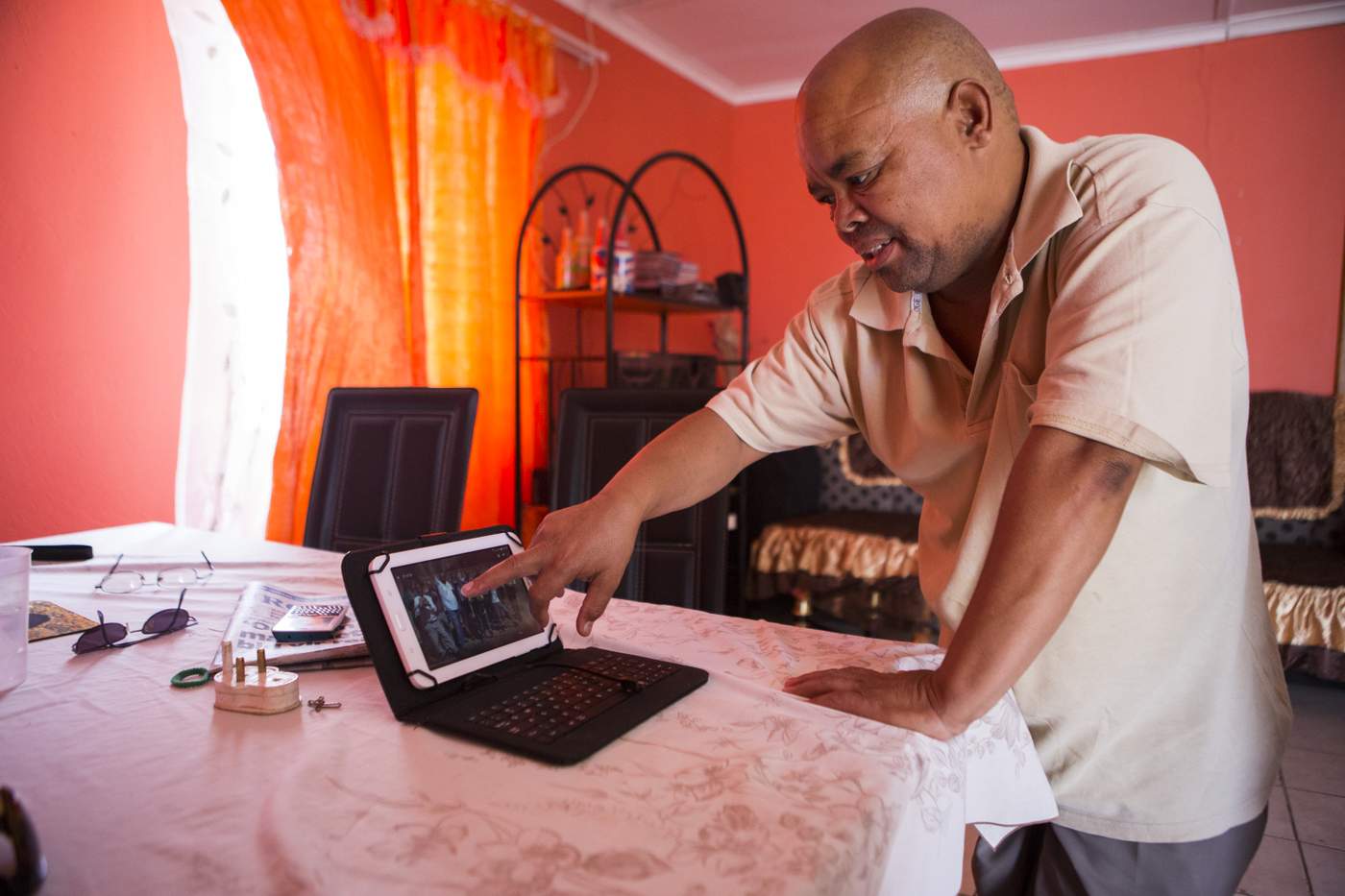 In March pastor Jakobus Virrooi took his flock of about 30 people from the poorer Calvinia West to pray at the Karee Dam. Not a drop of water was left in the dam.

“I have never seen a drought this bad,” he said. “The Lord ordered me to take my congregation and to go pray at the dam for rain. I had a vision that said we must go to the dam for the day and pray for rain.”

In April their prayers came true when sheets of rain drove the townspeople into their homes and the sound of thunder boomed across town. Thunderstorms rolled over the town, providing a fleeting sense of relief.

But for a town that has slowly turned to dust, much more is needed. And, more importantly, little of the rain actually made it to the Karee Dam, which remains dry.

Calvinia’s dire situation is an indication of the extreme weather events climate change is causing in South Africa and across the globe.

Scientific modelling shows the western regions of South Africa are becoming hotter and drier, causing water scarcity and changes in agricultural production and biodiversity distribution. Changes in rainfall patterns are affecting food security, forcing farmers such as those producing sheep in Calvinia to cut down their production.

Research from the University of Cape Town’s African Climate and Development Initiative indicates that droughts are set to become a way of life in the Western Cape and Northern Cape regions, setting in quicker and growing in intensity.

The Karee Dam dried up at the beginning of December last year, and is currently one of eight empty dams in the western region of South Africa – the others are the Prinsrivier, Floriskraal, Miertjieskraal, Oukloof, Gamkakloof, Tierpoort and Stompdrift dams. 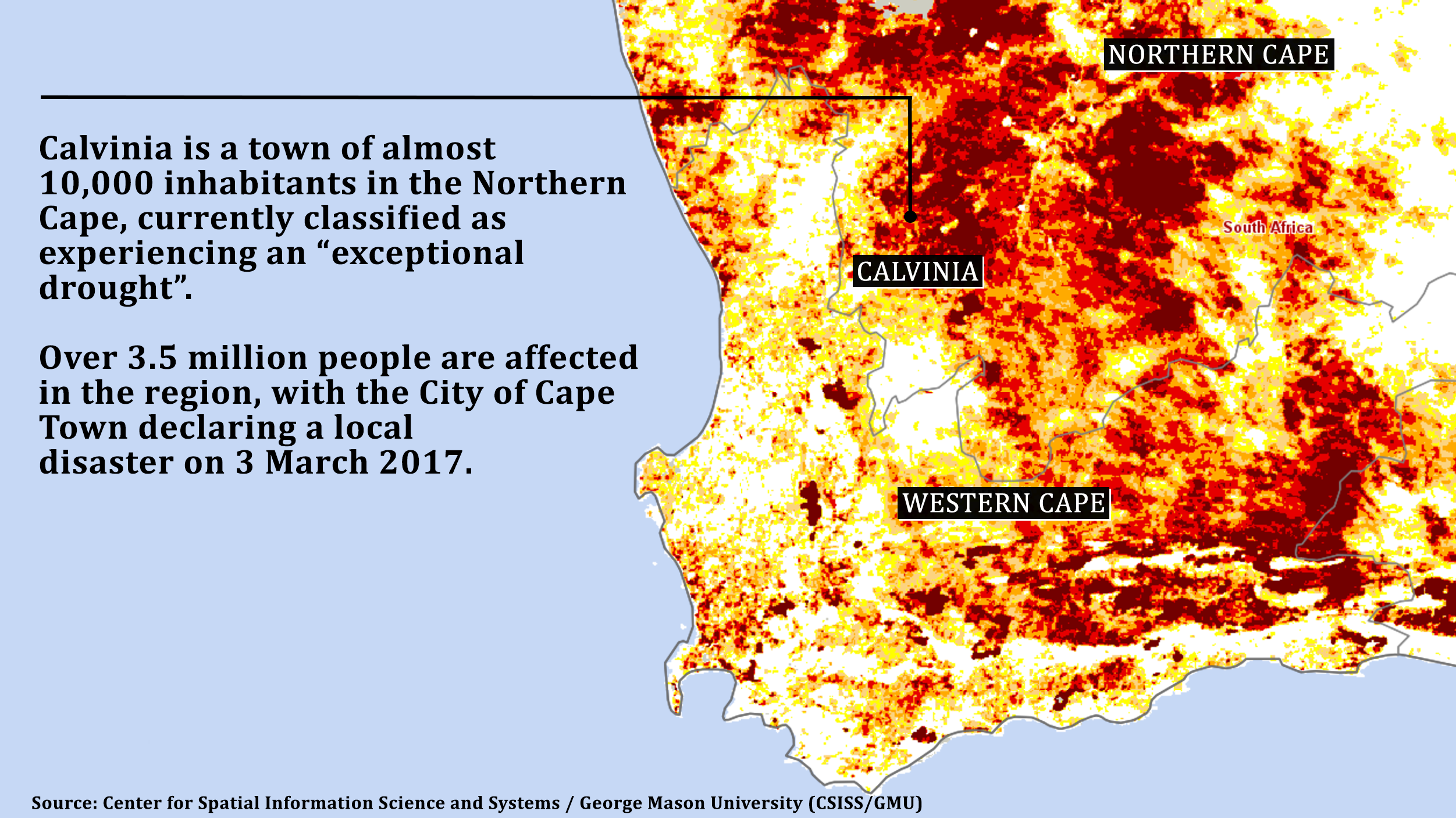 At the best of times, water is a precious commodity in the Hantam district, which falls in a winter rainfall area. Calvinia normally receives around 200mm a year, but in 2016 only 30mm fell in the Karee dam’s catchment area of 25km2. Summer temperatures regularly reached in the upper 40 degrees Celsius, and the average temperature for December was 33 degrees Celsius, according the South African Weather Service.

After the last drop of water evaporated from the Karee dam, Calvinia has relied on seven boreholes to provide about 55,000 litres of water an hour to the town’s more than 10,000 inhabitants.

The latest municipal statistics show there are 4,591 households in the municipality, which forms part of the Namakwa District Municipality, and getting the water they need has become a daily struggle. Apart from using the diminishing boreholes, water is being trucked in from Vanrhynsdorp about 120km away. 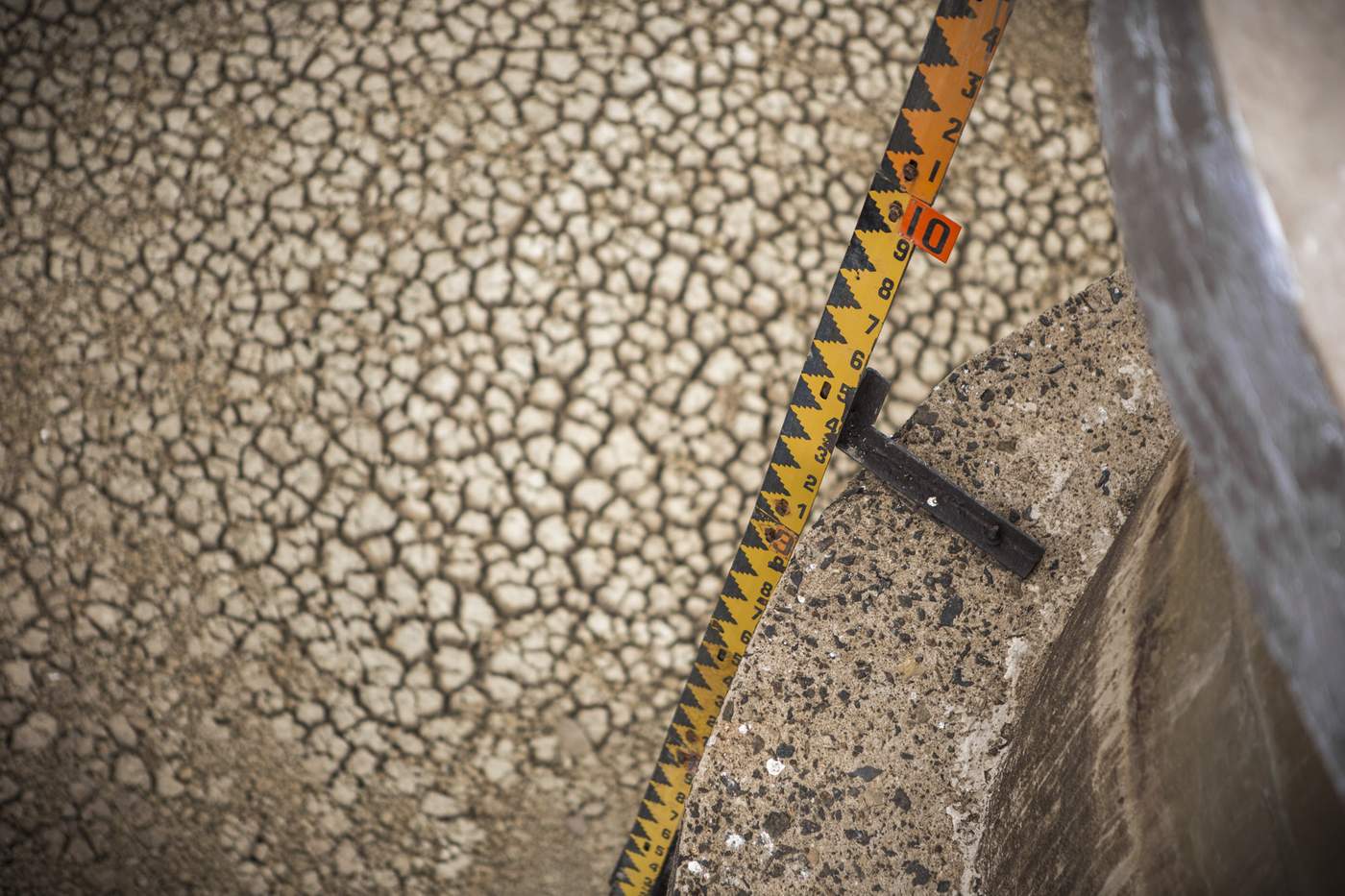 Municipal manager Riaan van Wyk said the drinking water crisis in Calvinia was of great concern. However, although the water in the boreholes was dwindling, he said groundwater levels were not falling significantly.

“There has been very little interruption to the water supply network,” he said. The boreholes rely on electricity to pump, and in the event of a power failure there are small town reservoirs that serve as a backup.

The municipality charges water users between R3.24 and R4 per kilolitre, which is still cheaper than Johannesburg residents pay, at R7,14 per kilolitre. Calvinia households that use more than 30 kilolitres a day are fined R2,000 or more, and several fines have been issued. 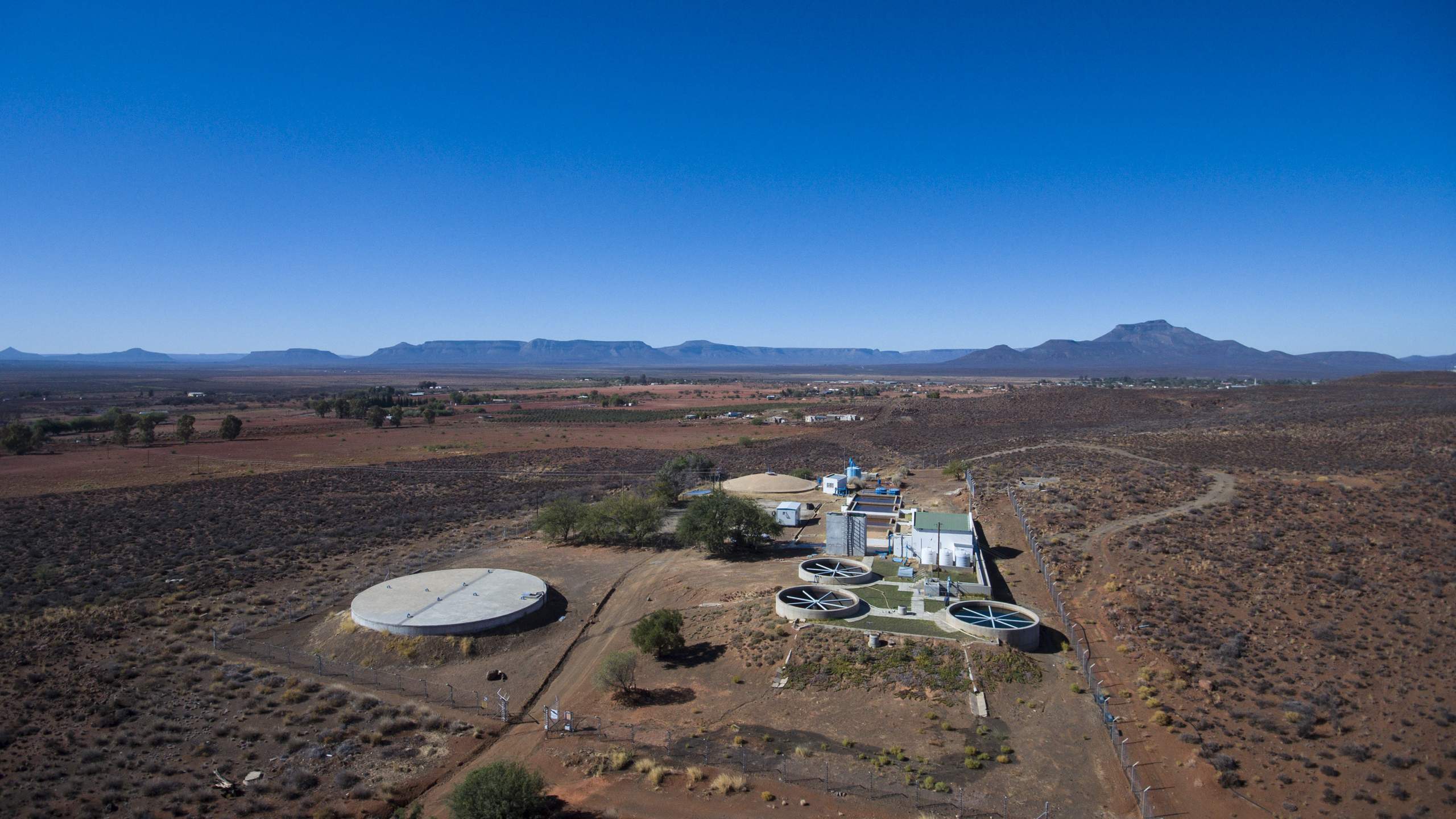 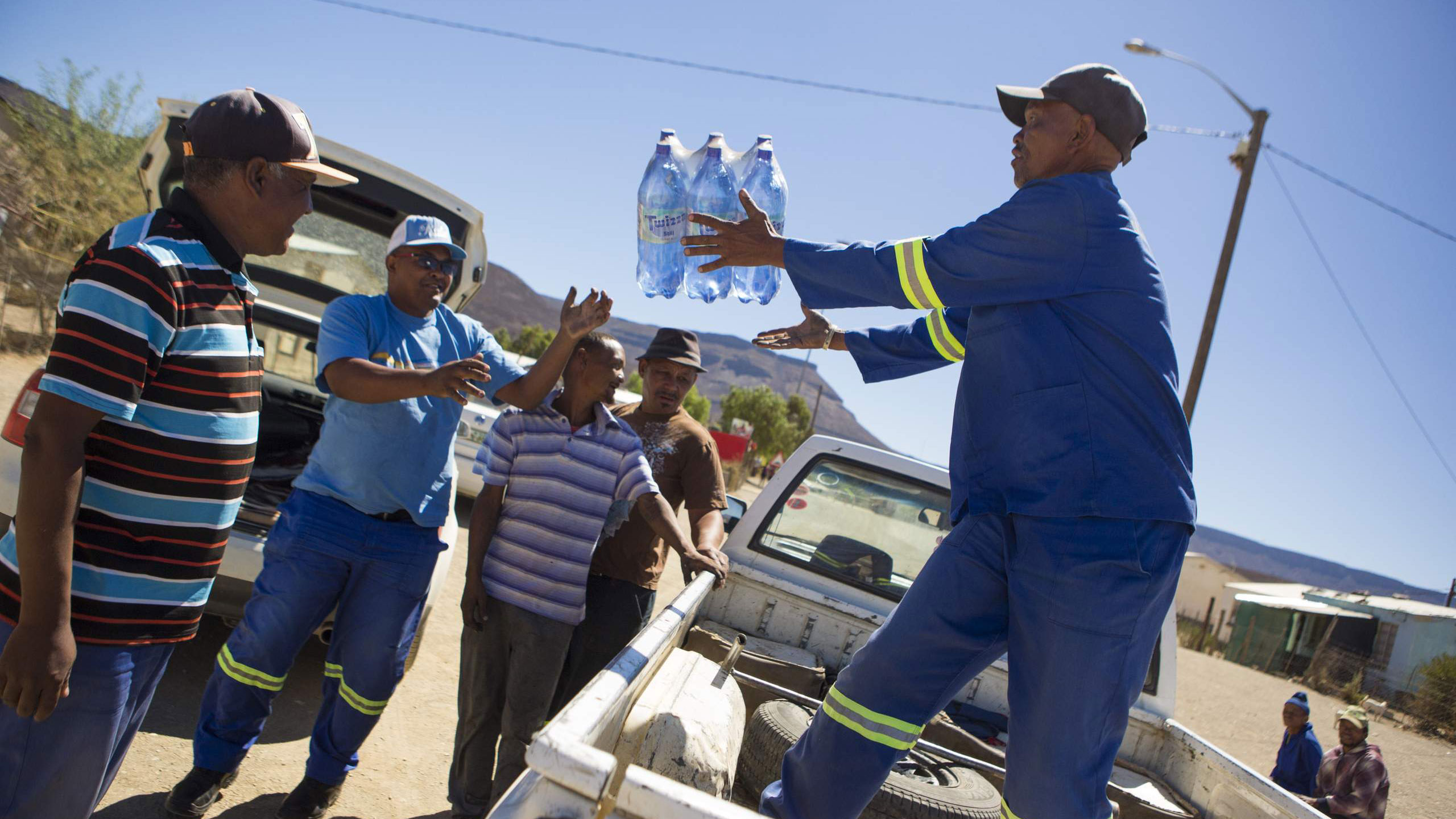 Bottled water donations are still pouring into town, and the Hantam Municipality helps distribute some of it to the poorest residents. 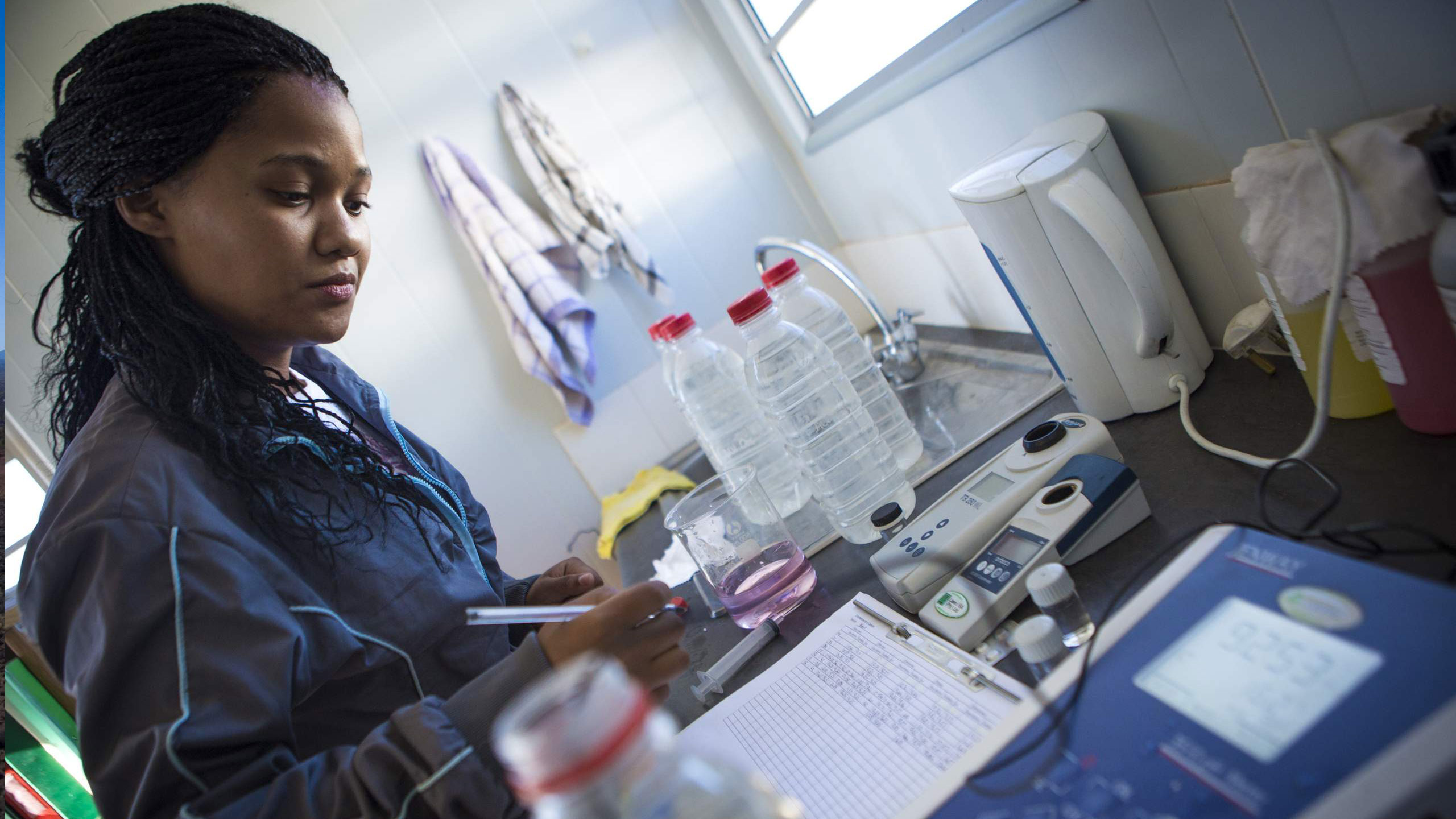 The town keeps meticulous records of how much water is pumped out of the boreholes and consumed by residents. 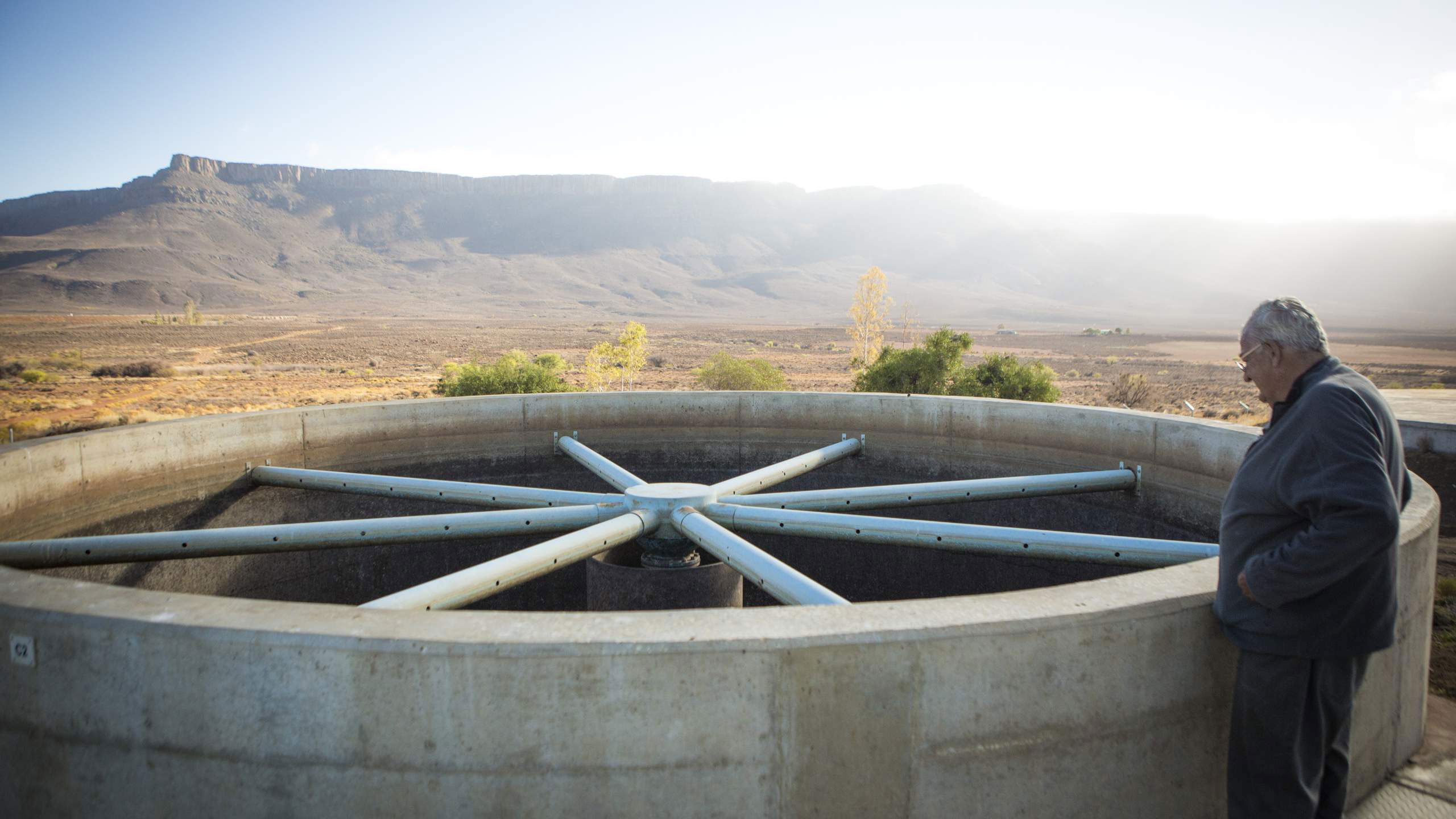 Small reservoirs serve as a backup for the boreholes when there is no electricity.

In Loeriesfontein, a town 88km away from Calvinia, residents have learned to live with dry taps for years.

Some 90,000 litres of water has to be trucked to Loeriesfontein from Nieuwoudtville, 70km away, to supply the local reservoir and taps are opened for for five hours a day at most. This costs the town R400,000 a month.

The provincial government has promised an upgraded pipeline to bring relief, but not a hole has been dug to make this happen. Loeriesfontein recently installed a number of new boreholes, but they are connected via solar panels, which are often stolen and can only deliver power in the day.

Van Wyk said this had cost the municipality R3-million over the past three years, money that could have been spent on bettering the lives of the poor in the poverty-stricken area. 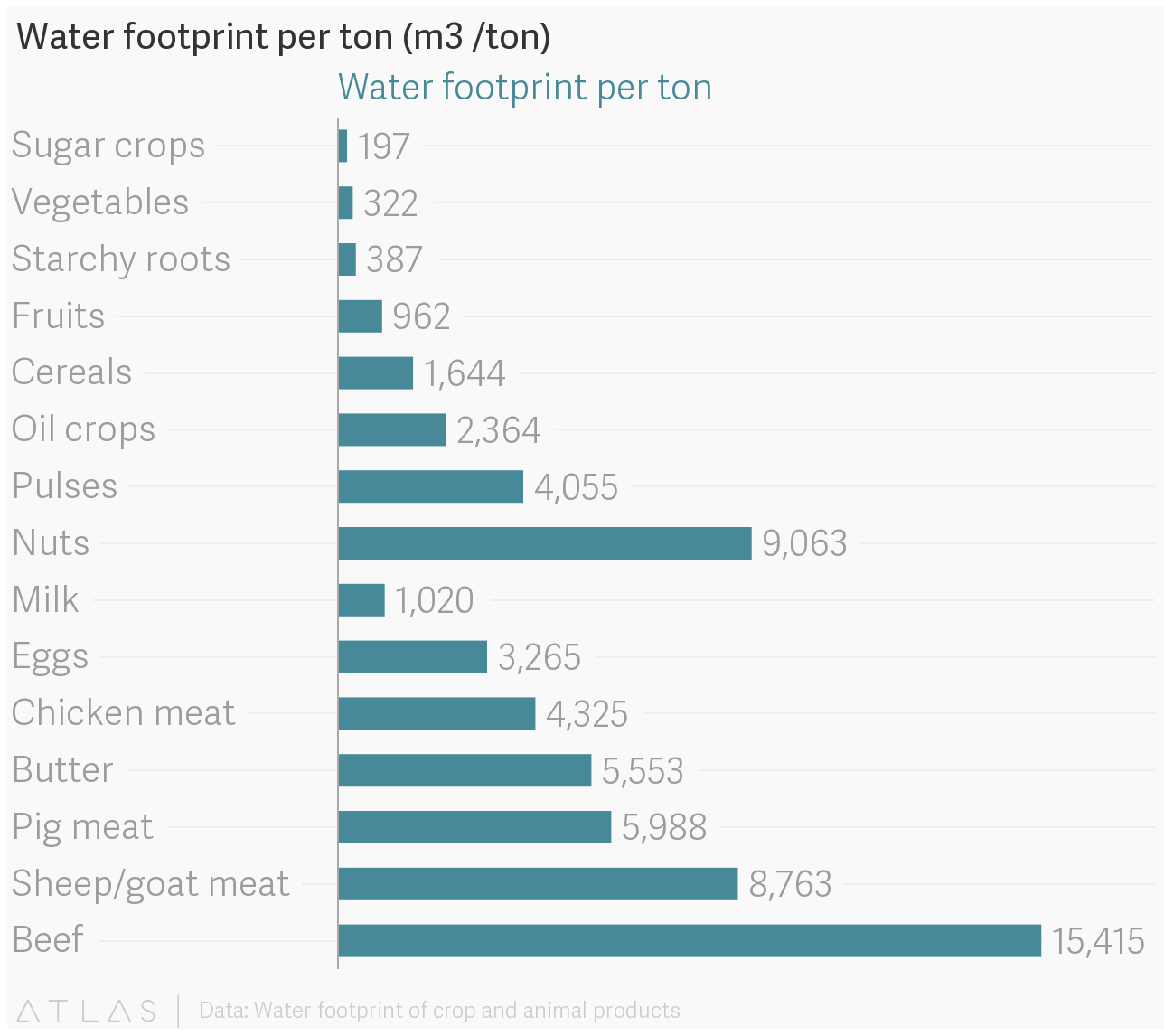 The municipality has repeatedly appealed to the national Department of Water and Sanitation for interventions at Calvinia and Loeriesfontein, but no definite plans are on the table. The department also did not respond to ClimaTracker’s questions about the water crisis in Calvinia and plans to solve it.

Some 90,000 litres of water has to be trucked to Loeriesfontein from Nieuwoudtville, 70km away, to supply the local reservoir and taps are opened for for five hours a day at most. This costs the town R400,000 a month.

Henk van Wyk, a local farmer and chairperson of Agri Northern Cape, a non-profit organisation that is helping to develop a stable agricultural environment in the Northern Cape, told Rapport newspaper in February that the national government has forsaken the farmers.

“Farmers have run out of cash because of the drought and the water table is shrinking fast,” he said.

Van Wyk said back in 2003 he had proposed that water be piped to the area from the Doring river 60km away, but the water department deemed it too expensive.

Another solution would be to connect to the Kenhardt-Keimoes pipeline on the Clanwilliam Dam 200km away. The Clanwilliam Dam has already reached its lowest level in recent years, though there are plans to raise the dam wall to increase the capacity of the dam as a response to climate change. 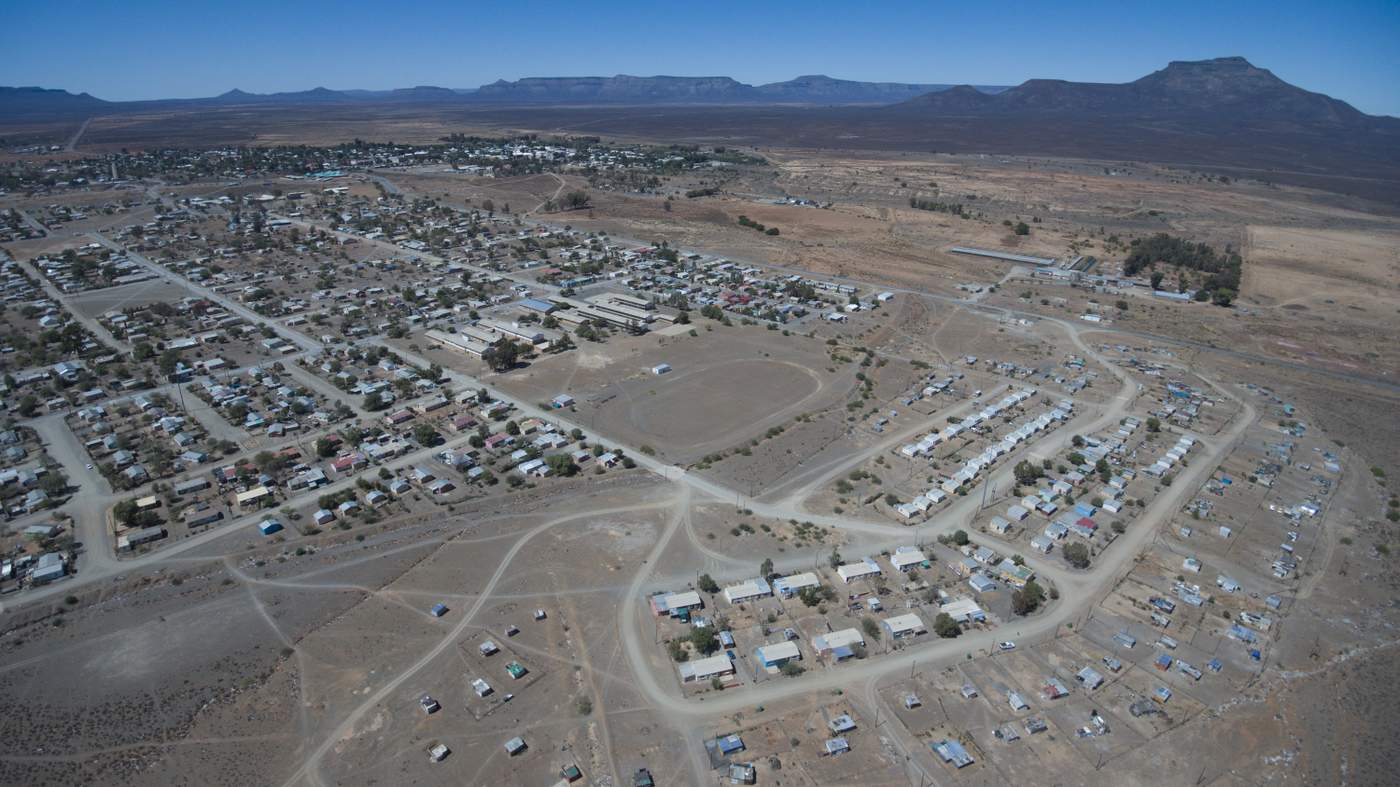 Bottled water has become a bestseller in Calvinia in recent months. Many locals distrust the borehole water, not only because “it tastes funny” but because they believe it causes stomach ailments. Those who can’t stomach the brackish borehole water have to pay for bottled water at R10 a litre.

“The water doesn’t taste good, it is ‘hard’ and salty to the taste,” said Natasha Oranje, a presenter on Radio Kaboesna, the local community radio station. “When we take baths, we need to add liquid dishwasher to the water in order for it not to create a ring of scum around our basins.”

“The water is brackish and salty, and it upsets my stomach,” said Ouma Opperman.

Municipal manager Van Wyk said the boreholes’ groundwater varies in its mineral content but is generally considered clean and not bad tasting. The town’s water supply is tested several times a week at the treatment plant, and also at locations throughout town, to ensure the water is up to standard, he said. 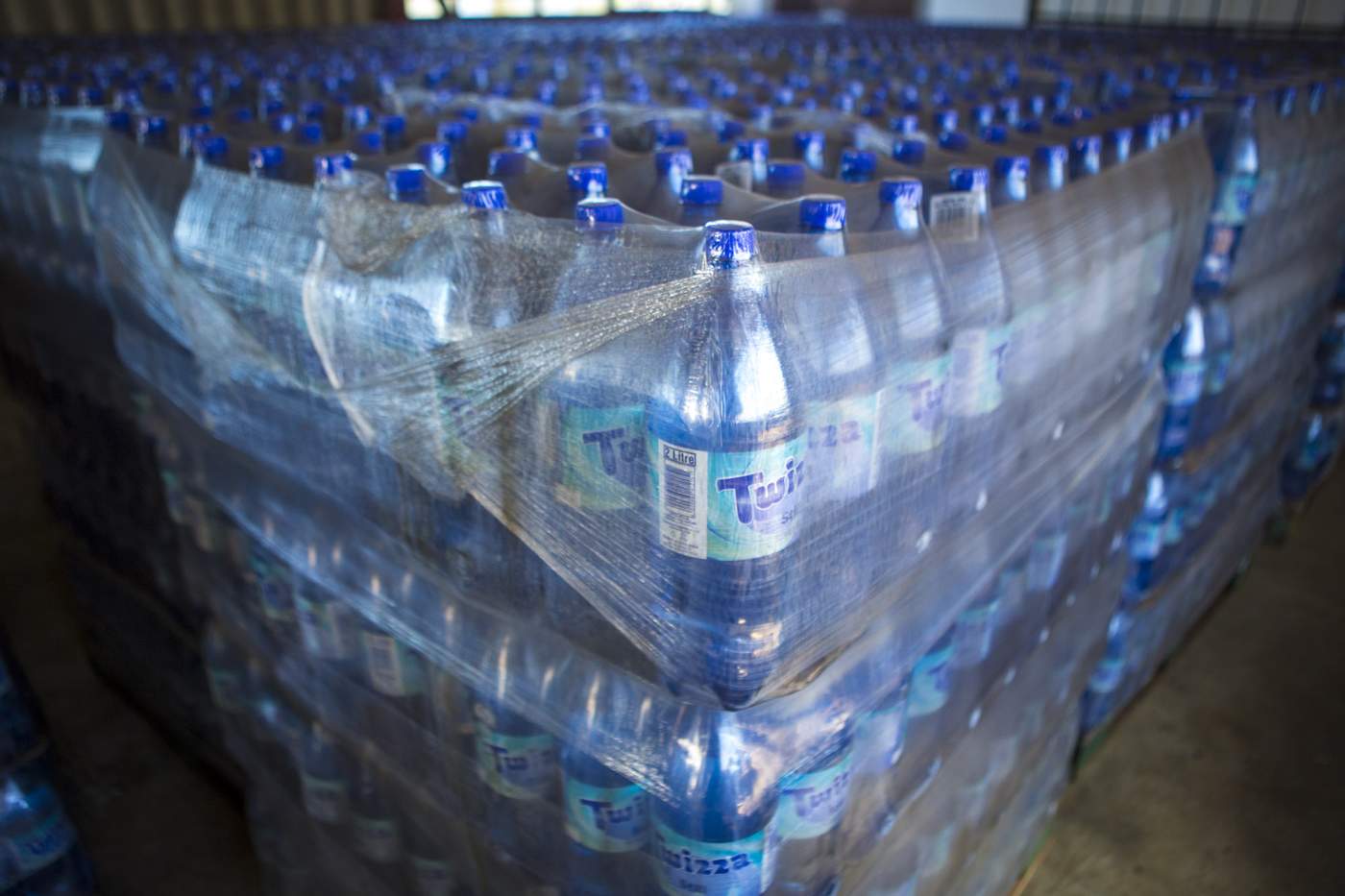 Calvinia’s plight has received wide coverage and as a result many Good Samaritans have chipped in with water donations.

But the Van der Merwes, who run the local butchery, were concerned that the water is not getting to the needy in Calvinia. “A lot of the donated water gets deposited back into the municipal water supply, which defeats the purposes,” said Eureka van Der Merwe.

As a result the butchery has established a system, which they manage, whereby the most needy can collect water with their own two- or five-litre receptacles.

Water donations and trucked-in water are unsustainable for the long term, but they help the town survive while its residents continue praying for rain.

An Oxpeckers & AfricanDRONE Investigation for #ClimaTracker

Funded by impactAFRICA and the Bill and Melinda Gates Foundation.