Kruger drones struggle to take off

05 May Kruger drones struggle to take off

Posted on 5 May, 2016 by Oxpeckers Reporters

Drones promised to provide an invisible eye skimming the Kruger park to deter poachers. The reality on the ground has not yet lived up to that promise, reports Yolandi Groenewald

The idea is that the drones go out and ‘look’ for transgressors, and the coordinates of their activity are passed along to rangers. Photo courtesy PPF

The Kruger National Park’s eyes in the sky have not delivered the protection to rhinos they vowed to provide.

“The drones have not been a success story so far,” said the Kruger’s chief ranger, Nicholus Funda. He said the high temperatures in the park, especially heat reflecting off boulders, provided too many variations in temperatures, throwing off the drones’ infrared cameras.

“There are also so many movements in the park that it is difficult to distinguish between animal movements and those of poachers,” Funda said.

Of the 1,175 rhinos poached in South Africa in 2015, 826 were killed in the Kruger. Rangers describe the rhino-poaching spree as a full-out war, where all possible help is needed.

“We had 2,466 incidents during 2015, and 7,128 poachers entered the park since start of Project Rhino [anti-poaching campaign] in 2012,” said Frik Rossouw, senior investigator for the South African National Parks (SANParks) environmental crimes unit.

“That is 10 armed groups per day coming into the park to poach our rhinos.”

Kruger is home to between 8,400 and 9,300 rhinos. At least 202 poachers were arrested in the park last year, and another 115 were arrested just outside it.

Drones, effective in other war-ravaged areas, held the promise of being a very effective tool against the massacre.

In March 2015 drones were deployed in the park to help combat rhino poaching. Because the Kruger is so large, it is a nightmare to patrol. Using drones could potentially up surveillance and help spot suspects quickly.

Supported by the Peace Parks Foundation, the drone project’s managers in the Kruger had high hopes that the technology could make a difference in the rhino war.

The drones became the invisible eye in the sky, flying over the park to detect poachers stalking rhinos. They were dubbed Air Shepherd, combining the names of the three organisations involved – the Charles A and Anne Morrow Lindbergh Foundation, the Peace Parks Foundation, and UAV and Drone Solutions.

But it was only last month that the drone programme had its first success since its launch, when a drone being tested spotted three suspects darting through a section of the park.

The footage, originally shot with a lens with infrared capability, shows three dark, elongated dots moving swiftly across open ground, in contrast against the paleness of surrounding trees and foliage, which are much cooler than the three bodies the crew in the support vehicle are watching. Although the suspects fled, rangers recovered a firearm as a result of the footage.

Otto Werdmuller von Elgg, director of UDS, said he had founded his company four years ago with a business partner specifically to address rhino poaching.

While he was cognisant of the disappointment that people voiced, he believes the project is working.

“We are happy,” he said. “The naysayers keep saying UAVs [unmanned aerial vehicles] don’t work, you can’t see the poachers. However, what you’re seeing is a grainy video taken on a cellphone and you can easily see those are people.”

Von Elgg said his drones can be deployed from anywhere in the bush, and fly for two and a half hours. The drone technology works best in conjunction with intelligence and anti-poaching units on the ground.

The idea is that the drones go out and “look” for people in the park, and the coordinates of the activity are passed along to rangers. The drones can provide a live video up to 25 kilometres away, Von Elgg said.

However, a ranger involved in the drone programme said more technology was needed to make the programme work.

“We need a basemap that includes all the variables in the park. We have to take into account the high temperatures, the animal movements, the extreme weather, and the park ‘being alive’,” he said. “It can be done, but it will need significant more investment.”

UDS was already flying fully operational anti-poaching missions in the KwaZulu-Natal region when it embarked on a year’s trial in the Kruger. The trial is still continuing.

SANParks chief executive officer Fundisile Mketeni said the Kruger drone programme would continue to investigate the effectiveness of various UAV technologies as instruments in rhino protection efforts “under a range of operational conditions”.

“By the end of the project we will have a lot of information about the use of available technology in anti-poaching operations and be able to make informed decision on what is best for our environment,” he said.

The testing of the drone technology in the Kruger was implemented as part of a multi-pronged approach of anti-poaching initiatives, supported by the Rhino Protection Programme.

The programme is a collaborative effort between South Africa’s Department of Environmental Affairs, SANParks, Ezemvelo KZN Wildlife and the Peace Parks Foundation. It is mainly funded by the Dutch and Swedish postcode lotteries.

The idea of drones guarding rhinos grabbed the imagination of many conservationists trying to think out of the box to save South Africa’s rhinos.

In 2013 small, lightweight, battery-powered Falcon drones that could be launched by hand and fly over a range of almost 10km for up to 90 minutes were tested in the park.

It was hoped that their high-resolution infrared cameras could identify suspected poachers and provide intelligence to rangers that could later have been used in the court cases.

But the Falcon drones also did not deliver the required results. 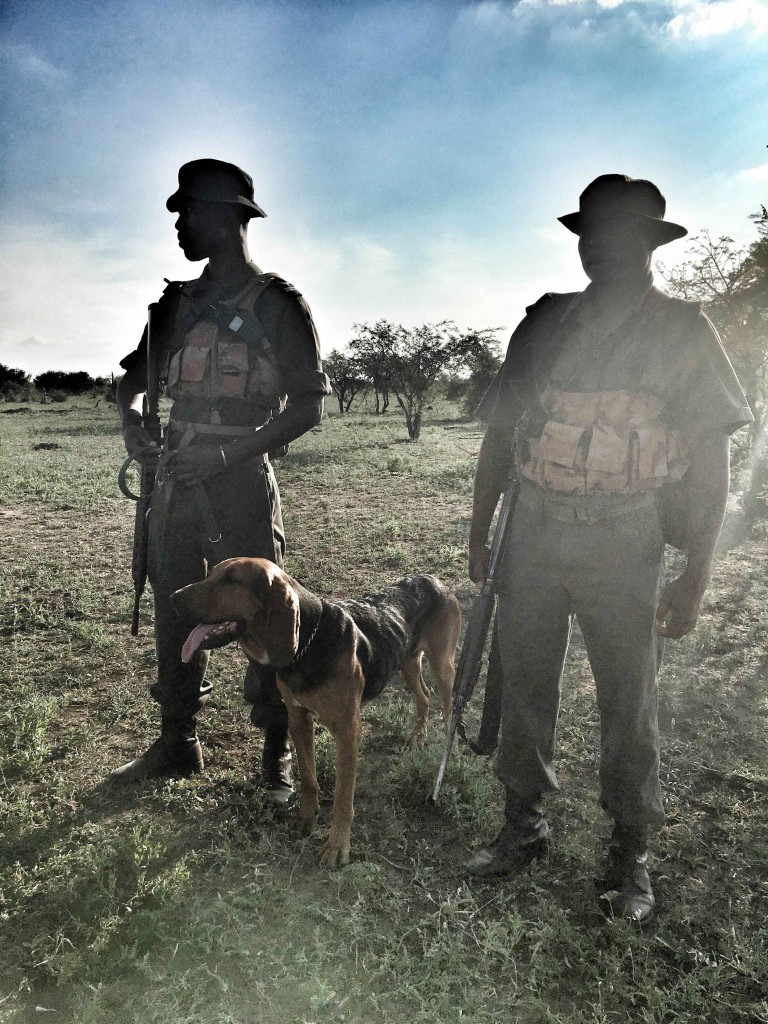 Rangers in the Kruger say tracking dogs are among the most successful tools in capturing poachers and making arrests. Photo: Yolandi Groenewald

General Johan Jooste, who headed up anti-poaching efforts in the Kruger until he was moved to the SANParks head office in late 2015, was also interested in drone projects but was sceptical about whether they would work in practice.

He told CBC News two years ago that there was “drone fever” in the Kruger, but that traditional methods such as tracking with dogs and solid intelligence actually yielded better results.

SANParks managers of the project believe that with the necessary funding drones could eventually rule the skies above the park. But at the moment the necessary funds are not available to create the technology that would enable the drones to become a success.

“The fact is that we need millions and millions of rands to wage this war against rhino poachers,” one Kruger ranger said. “And we simply don’t know if the drone project is a black hole, draining funds that could have been used to strengthen existing working programmes, such as the rangers on foot or the dog programmes.”

Drones also offer technology to track the movements of all persons entering the park. Last week systems integrator Dimension Data and United States-based networking giant Cisco announced they would use their technology to incorporate CCTV, drones with infrared cameras, thermal imaging, vehicle-tracking sensors, as well as seismic sensors to track everyone who enters the park.

As a test the two companies will deploy the technology in an unnamed private game reserve adjacent to the Kruger, to monitor and track individuals from the time they enter the reserve gates until they exit.

The new project, dubbed Connected Conservation, is based on a wi-fi network which will connect the different drones, sensors and cameras around the reserve.

The intelligent network was trained using data from the rangers, security personnel and control centre teams, to understand the regular movements of people within the reserve. The system in future should be able to determine if someone is entering the reserve illegally and initiate an emergency response.

Groenewald’s trip to the Kruger park in April was sponsored by Rhino Tears, a range of wines from the Mt Vernon estate in Cape Town that donates proceeds from every bottle sold to anti-rhino poaching efforts. Over the past year since Rhino Tears launched, it has contributed almost R1-million towards the procurement of ranger equipment and support for projects Watchdog and Skywards. Find out more about Rhino Tears at https://www.rhinotears.co.za, or https://www.facebook.com/rhinotearswine/